So, Here's the Plan! 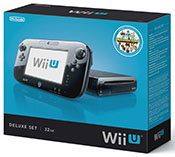 I'm a Nintendo fab boy, I grew up at the very tail end of the Atari generation, right about the time of the "Great Video Game Crash" that took out most console makers in the early 80s, and left Atari limping along for another few years (until they went out in a whimper of glory with the Lynx and the Jaguar). The first console I own myself (not one of my siblings) was a Nintendo Entertainment System, and it's been a point of pride to be an interation of every single one of their consoles since that time. Hell, I own a Virtual Boy (and actually enjoyed it). How many people willingly bought one of those?

But my passion for Nintendo died right around the time of the Wii. Don't get me wrong -- when their head is in the game, that are still among the best game makers around. But the Wii, with it's Wiimotes and it's waggles... ugh. I just couldn't care less. I bought a Wii figuring, "it's Nintendo. They'll make this system worthwhile." Well, plus Super Smash Bros. Brawl. But what was the last game I cared about from Big N? Super Smash Bros. Brawl. I bought that, and New Super Mario Bros. Wii (which was fun, but felt a lot like Super Mario Bros. 3) and Donkey Kong Country Returns, and I still have yet to get around to DKCR. I have no desire to pick up other games for the Wii, and I still haven't bought a WiiU or a 3DS.

So I'm sitting here, wracking my brain to figure out what Nintendo can do to pull themselves out of the tail spin their in. And it is a tailspin at this point. Their business fully relies on the 3DS now -- the WiiU is selling so poorly that, without the 3DS, their earning reports would like like late era Atari (or Sega, really). But it doesn't have to be over. They still have a stable of great characters (and past games). If they just did a few things differently, they could probably pull it all together...

I'm not saying that, in theory, a table-based system is a bad idea. I just think the way they did it is wrong. Nintendo has this habit of courting the casual (kid-like) gamers, at the expense of the hardcore audience. The thing is, though, that the hardcore gamers were their audience long ago, but the Wii catered to the casual audience almost exclusively. The Wiimote was just not a precise control instrument (no matter what Nintendo might have said), and the games that could get released on the XBox 360 and the Playstation 3 didn't translate well to Wiimote controls.

Instead of trying to compete with the big guys using cheaper, inferior hardware and a tablet, they should refresh their whole lineup. Get rid of the WiiU as soon as they can, and really take on their competitors.

Step 2: End the DS Era and Move Into Tablets

"But wait," I hear you say, "you just said the WiiU, with it's tablet, should go away. And the 3DS is the only thing keeping the company alive." Sure, that is true. But the 3DS needed a price cut to get competitive. And it's still not the record breaker that the original DS was. What changed? Tablets. Real, stand-alone tablets.

The tablet control on the WiiU isn't standalone -- you need the WiiU, turned on and functioning, the make anything happen. You need it to bring the magic, and the WiiU aint got no magic to bring. If Nintendo wants to compete with Apple, which I think they should (since that's where their casual market went), they should work on bringing a real tablet to the market.

Think about it -- everything Nintendo does well (portable gaming, casual fun) is perfectly suited to the tablet audience. They already have a tablet-like device with the WiiU, so clearly they're looking at that market, and they know how to do good portable gaming, so untethering the tablet from the console just makes sense.

Hell, considering that the new 2DS iteration of the 3DS is practically a tablet anyway, Nintendo is halfway there. Just enlarge it, make it thinner (which Nintendo eventually does with every portable anyway), and put a real OS behind it.

Android is free, and the darling of the portable industry. Nintendo could reskin it, work with a couple of app makers to put some office-like applications behind it, and (if they really wanted to), make a Nintendo E-shop to sell all their games out of (knowing Nintendo, it'd be walled off from the rest of the Android ecosystem, which I personally think is a mistake, but we can only expect Nintendo to go so far -- besides, if it's Android based, some industrious hackers will find a way to get other apps on there anyway, so the wall garden is a moot point).

Nintendo needs to build a tablet (call it the Nintendo Tab if you like) and take on Apple for real.

What can Nintendo give you that MS and Sony can't? Mario. They have all the games we remember, all the games we used to love (especially with Sega constantly partnering with them). What Nintendo needs to do is compete at their level. Make a console with real power, and get the big game makers to make real games for it.

Hell, if they take a couple of years to R&D together a new console, it'll have better specs than the other two, and we all know hardcore gamers care most about specs. Which system is prettier? Which has the most frames-per-second at 4K resolution. Nintendo can take a couple of years and make something powerful.

And then, they should let you link your Nintendo Tab to it. Then all the casual gamers that want to run easy updates on their tablets can do it (by hooking up the Tab to the new console -- call it the Nintendo Station). Dock your Tab into the Station while your kids play a game at the same time. It'll run diagnostics, download anything you have pending, update everything, and recharge.

And then, if game makers want, they can make games that use either control scheme (Tab or standard Station controllers). It's up to the game makers, but if you get a successful tablet out there (real competition for Apple, remember), the numbers will justify this setup.

And then gamers get the best of both worlds -- a console from Nintendo that's actually powerful, a tablet that can play Nintendo games and actually do real productivity things at the same time (instead of the almost-approach Nintendo keeps giving us), and a console-portable connection with real justification.

You're almost there, Nintendo. Just do it right, and your fans will pay attention.

A guy can dream, anyway.