A Failed Leap, a Bad Conclusion

And here we are at the last book of the "Long Earth" series and, wow, does this series end with a whimper. As I've said all along, this series doesn't like for big ideas, the problem has always just been in the execution. The books were a pre-planned series, originally envisioned as a set of five novels (a pentology?) by authors Terry Pratchett and Stephen Baxter, but after those exact five books, you have to wonder what it was all for. This was their plan? Really? 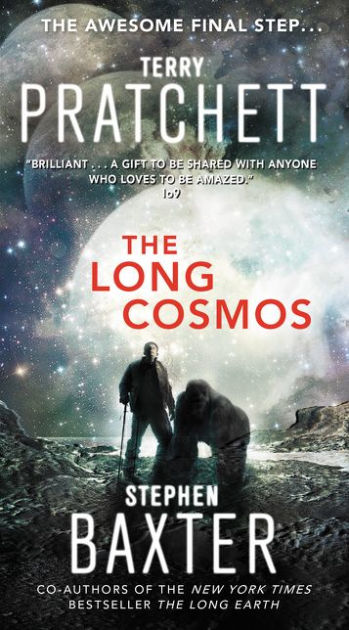 I want to ascribe some of the issues with the series due to Pratchett's ailing health. Diagnosed with Alzheimer's years before, Pratchett was forced to find new ways to write, often via dictation, to continue his steady output. Sadly he died before the last two books were finished and though apparently all five books were in some form of "completion" before his death, it's hard not to see the finished product and feel like, as the books went on, they steadily lost the Pratchett spark that made even the earliest books in the set readable. Where The Long Earth at least had energy behind its big ideas (even if it didn't quite stick the landing), The Long Cosmos fizzles out long the series reaches its "conclusion".

Although there are any number of issues with this novel, the biggest knock against it is that it's simply a bad ending to the story. The main plot is focused on Earth 3,141,592 (a "Pi" world, you'll note), where the great minds of humanity (along with other sentient species from across the Long Earth) have gathered to build a massive, super intelligent machine. This was spurned on by a "signal" that is sent to the Long Earth from space, a simple declaration, "join us" with, seemingly, some kind of instructions. Taking the information gleaned from the single, humans and Next start building the massive machine (using Silver Beetle replication tech) so they can interpret the data and figure out what the next step should be. Do they "join" or not?

But, here's the thing: the computer really seems irrelevant to what comes next. Its not the computer, but humanity itself, that decides to build a modified spacecraft and jump laterally (North, instead of East or West) to the next world in sequence. I'm not sure, at this point, what purpose the giant computer they built actually served (it's about as useful as Deep Mind in the Hitchhiker's Guide frankly) except to keep them busy for a while.

This plot line isn't helped by the fact that despite it being this big sweeping idea of the novel it's largely ignored for much of the meat of the book. Instead we're back to Joshua, in his 60s and on an expedition out into the Long Earth, one of his "sabbaticals". He's getting on in years, of course, and is being told by everyone that knows him that he shouldn't be going out like this at his age. He ignores them, of course, and then eventually gets himself trampled by a mammoth-like creature, which severely breaks his leg. He does, however, get aid from a Troll, an older guy in the species who Joshua takes to calling "Sancho."

This is an interesting enough story on its own as at least it gives us a closer look at Joshua, our nominal hero of this series, along with the trolls through Sancho and his loose pack. They tend to Joshua and help him heal, and then, eventually, Joshua's son, Rod, comes to check on his. We get family bonding before, sadly, this is cut-off by a weird creature comes up, attacks Rod, and drags Josh's son off into the Long Earth. With the help of Sancho, though, Joshua and the Troll are able to track Rod down deep in the Long Earth (hundreds of millions of worlds deeper into the sequence) and, eventually, take out the creature and save Rod.

The whole storyline here is easily half the book but, at the end of the day, I don't really know what it added to the novel. Yes, it lets Joshua heal the bond with his family, a bond that the previous four books fractured beyond all repair, leaving this storyline feeling rushed and simplistic. It's the standard cliche of storytelling: two people hate each other but, due to the heroism of one of our characters, suddenly all is forgiven and pass ills forgotten. It's cheap and only serves to give Joshua a happy ending of a sort, but it doesn't really add anything at all. We know nothing more about Joshua, or Rod, by the novel's end, especially since Rod's active part in the novel ends the second he's rescued, with a whole third act still to go.

Which brings us back to the signal. Once humanity decides to jump across worlds, a crew it pulled together which includes Joshua, Sancho (for some reason), and the A.I. that acted as a thread through the earlier books, Lobsang. "The gang is all together" you could say, except they're all basically spectators as they travel across a few quick worlds, resolve a lingering plot thread from the previous book (they find the "Traveler" that disappeared in that book), and somehow call this an ending. We never actually meet the aliens that sent the signal so the whole purpose of the expedition, and what it all meant, is left vague.

And we're supposed to take what, exactly, away from all this? Humans suddenly have a ton of new worlds to explore and... what? Well, we don't know because this is where the book, and the series, ends. Just as a cool idea is raised and it seems like the scope of the novel could widen, or at least change, the whole series is over. We finally get a real change to the status quo for this series, but the authors (or, really, just Baxter at this point) have no desire to explore it, leaving it dangling as an unfinished though that will never get resolution.

Perhaps, if Pratchett were still alive, the authors might have decided to continue the series further, exploring these new worlds. We're in a "what if" scenario now, though because we now have to think, "well, if Pratchett hadn't gotten Alzheimer's..." But these are the books we have and this is all the ending we're going to get as Baxter isn't interested in writing anything further on the matter. Considering how uneven the whole series was, I guess The Long Cosmos is the perfect ending for these books: its has jumbled and half-developed as all the other books, and ends with an ending that isn't really an ending, just like every other novel in the series.

It's just a pity the series had to end like this. That first novel was intriguing (if rough) and there was so much potential there. But over the course of the next four books, this entry included, the series squandered all that good will and great ideas. It's sad and forces me to say, conclusively, that "The Long Earth" is not a series worth reading. I like Pratchett's works but this whole series is only long, massive misfire for the dearly missed author.