Have you ever gotten into a novel and then continued reading the series based solely on narrative momentum. It feels like a sunk-cost issue -- "I read all of this so far so I just have to see what happens next!". A long while back one of my sisters got me into a vampire series. It's a terrible series now, mind you -- the "Anita Blake: Vampire Hunter" series -- but for the first couple of books I was at least interested in the world building and some of the cool vampire powers. But then, as the series dragged on (literally felt like it dragged on), the books got worse and worse (and somehow evolved into straight up porn), and yet I stuck around for far longer than I should have simply because of that original narrative grain that I felt invested in. 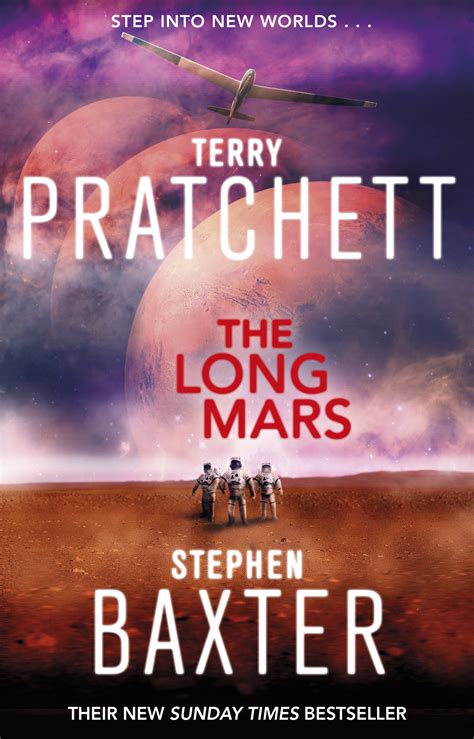 Although I'm not arguing that the Long Earth books are anywhere near as bad as the "Anita Blake" series, there's still that same narrative momentum carrying me along. We're not three books into this series and I find it hard to care about much of anything that's going on in the novel. The concepts in the book are still cool -- a series of parallel Earths that our characters can step through, one at a time, exploring the divergent possible evolutions of our planet, and now extended to Mars as well -- but its in the execution that the novel simply fails to come together.

Like with the previous novel, there are multiple narrative threads vying for attention in The Long Mars. The A-plot (if we can call it that) follows the adventure of Sally Lyndsay, our rough and tumble (and decidedly anti-social) natural "stepper", as she gets dragged into a mission to Mars by her estranged father. Her crazy dad, Willis -- who has a reputation for being something of a mad scientist (he's the one that designed that "stepper box" that let all of humanity start stepping across all of the Long Earth) -- has some big plan in mind for Mars, a plan he won't tell anyone about, but he has to get to Mars, and he needs a natural stepper, like Sally, to assist him.

Meanwhile, the B-plot follows Joshua as he learns about the next stage in humanity's evolution: the Next. These are kids who, even at the day of birth, are incredibly, unimaginably smart. They can talk (in their own form of "gabble") immediately at birth, and even from a young age understand concepts that it would take normal human scientists decades of study to master. However, these kids also view themselves as above humanity, maybe even destined to control humanity. The various governments freak out about these kids, but Joshua has to step in and save them because, well, they're just kids. Maybe they can learn better?

And, finally, we have the voyage of the U.S.S. Neil Armstrong II. Commanded by Captain Maggie Kauffman, and Armstrong has been sent out into the far reaches of the Long Earth with the goal of hitting 250 Million West and planting a flag for the U.S. (this is to beat China, who went to 20 Million East, as a way of themselves beating the U.S. who had a civilian mission that went somewhat beyond 2 Million back in the first book). The sights they see, and the new worlds they find, show just how far the Long Earth can truly evolve, and raise the question of if there is any kind of end to how far the Long Earth goes?

Here is my issue with this series of books, perfectly encapsulated by this novel: Joshua is the character we're first introduced to in the original novel that started the series, and he's ostensibly our protagonist through all of these books. We learn the most about him in the first novel and we're supposed to rely on him, in a way, as our focal point for everything that comes. But, time and again, he's given the least interesting stories. He's tangential to the story of the Next, even though that ostensibly a major plot line going forward from this novel, and he barely has anything to do here. We learn barely anything new about him in this book (his marriage is crumbling, but we barely see anything about in between the characters, are simply told its crumbling), leaving us with no actual character growth in this novel for our lead.

The same issue applies to Sally. She joined the first novel late in the game but has been given co-lead status in each of these books. Like Joshua, though, there's no real character growth for Sally. She's shown to be distrustful of people, and especially hateful towards her father, at the start of this novel, and by the end of it absolutely nothing has changed for her. If anything, her plot line only reinforces that. It doesn't help that Willis, despite featuring in this novel remains little more than a cypher -- he hardly talks to the other characters about anything, and he keeps the point of his mission close to his chest right up until he finds what he's looking for (spoiler: it's a Martian space elevator so he can steal the tech and bring it back home to Earth). We never learn anything about these characters so their relationship remain perfunctory throughout this novel.

The parts that work best, as it was in the previous two novels, are the various characters on their missions exploring all the strange new worlds. Of the two missions, I think the journey of the Armstrong is vastly more interesting. The journey of the Navy crew as they venture deep into the Long Earth provides authors Pratchett and Baxter an opportunity to really let their creativity spin, coming up with all kinds of new and fabulous alien Earths to see. As always, it's the "jokers" that are most interesting, the weird worlds that don't conform to the normal evolution of Earth, the coolest being an "Earth" that is little more than a moon to an even larger planet.

Sally's mission across the Long Mars provides similar moments, but Mars is a much deader planet so these cool moments are fewer and much farther between. As explained in the novel, the chance for Mars to have a thriving ecology is largely dependent on outside factors -- a gap in the Long Earth seeding ecology to that version's Mars, or a comet that crashes into the planet and spread life-giving materials. However, in all instances, these moments of Mars come alive never last long because Mars simply can't support that kind of constant life. When our astronauts find a thriving Mars, that's the joker of this long chain of worlds; most Marses are dead and lifeless and that's the consistent factor.

I think the most interesting idea, which the novel brings up and then drops because it doesn't fit into the story the authors have in mind, is that the chain of the Long Mars doesn't follow parallel to the chain of the Long Earth. Step East from Gap Mars (as the book calls it) and you don't get to the Mars in the same universe as Gap-1 Earth; the chains of the two planets meet at one location but twist and move around each other in different ways. This is neat because it has all kinds of implications for space travel and maybe even fast travel across out own network of worlds but, again, it's just never mentioned again in this novel (and maybe never again in the last two books). The same goes for the Moon-Earth that the Armstrong finds. It's a cool idea, and there's a hint it could lead to something more, but then the matter is largely dropped.

It feels like the authors had a plan for these five books, but they had to both rush through the novels are a fast clip (in part because Pratchett was dying of Alzheimer's) while also not spending enough time on the factors that matter. There's a lot of character development left on the floor for all our characters -- Joshua went from a young man in the first book, to suddenly married in the second, to now separated from his wife in the third, and we don't get to experience any of the intervening events between these specific moments to understand why. It renders all the characters we meet as flat and lifeless as Willis, mere cyphers in their own stories.

The only characters we actually learn about and like are Kauffman and her Navy crew. These are fleshed out characters, given the depth and development we expect from a crew in Star TrekOriginally conceived as "Wagon Train in Space", Star Trek was released during the height of the Hollywood Western film and TV boom. While the concept CBS originally asked for had a western vibe, it was the smart, intellectual stories set in a future utopia of science and exploration that proved vital to the series' long impact on popular culture.. Their adventure into the Long Earth is the most interesting part of the novel, for sure, although we sadly only get one-third of one novel with them and then their mission is over. I could have spent an entire series of novels reading all about them and their adventures, but like so many ideas put forward in this book, they're cast aside all too quickly.

I really want to enjoy these books. I love the concepts and Pratchett is one of my favorite writers. There's something missing from the Long Earth series, though, and this novel only serves to show all the flaws in the collaborative work between these two writers. As the midpoint for the series, The Long Mars shows all the flaws (and all the nagging cool ideas) the series has baked into it. At that point, with only two novels left, there no reason to expect the books to suddenly get good. I just want them to be good enough and I think, even on that front, I'm going to be disappointed, simply drawn to the end of the series by narrative momentum for a book series I struggle to quit.