Having gone through the whole of Terry Pratchett's magnum opus, the DiscworldAt first blush, the Discworld series seems like just a parody of fantasy literature. Dig into any of the books, though, and you'll find deep and funny tales of a world just slightly off from our own. A world that, yes, is a flat disc carried through space on the backs of four elephants that, in turn, ride on the back of a giant space turtle. series, it seemed only right to bounce over to his other big series, The Long Earth. Co-written between Pratchett and Stephen Baxter, The Long Earth (both the title of the series and the name of this, the first book in the run) is a much more sci-fi than fantasy. I wouldn't call it "hard sci-fi" as it certainly has fantastic elements that feel a long way from true sci-fi. And yet, this series has a very solid eye towards the concepts raised in the series, how plausible they could be, and what this kind of reality would mean for our own world. 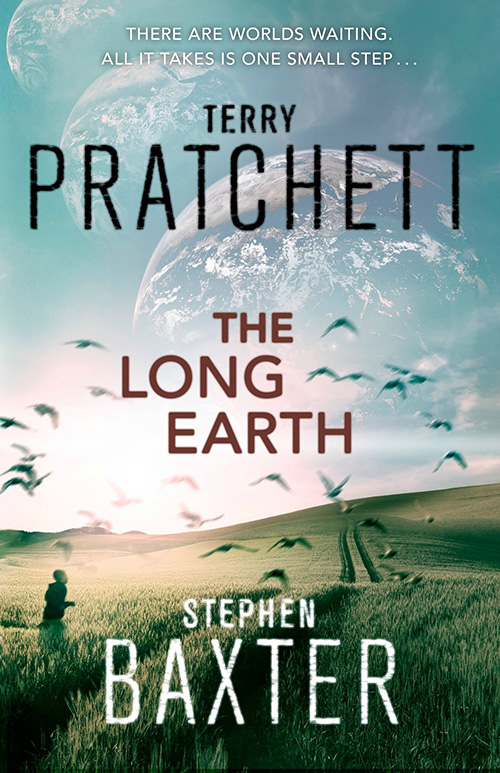 The big hook of The Long Earth is that our world isn't the only world. One day ("Step Day", as it's called in the series), the Internet is awash in reports of a new invention: the Stepper Box. Build it yourself, wire the box together, and then you can turn a switch (marked "East" or "West") and "step" over to another world. Our Earth is one in a series of parallel worlds, a seemingly infinite supply of worlds all sitting them for humans to walk into and colonize. And they are all really open because, unlike our Earth, every other world seems devoid of sentient life (they aren't, but we'll get to that).

This concept alone was enough to hook me. One of the sci-fi concepts I love more than anything else in time travel, the "what if" storytelling and the boundless possibilities that kind of innovation could unlock. Time travel is probably impossible (more than likely, as some have thought, past and future don't actually exist and the present we see is the only point in space-time that is real. That doesn't change the fact, though, that time travel is cool. Extending off time travel, though, are parallel worlds, the idea that each change we could have made leads to a different version of Earth, a butterfly effect of sorts that could lead us to all kinds of potential versions of our reality.

I buy in to that kind of storytelling, but I really buy in to the way The Long Earth handles it. We follow a selection of characters as they travel along the Long Earth (as the books call it), seeing how the Earth slowly evolved from one world to the next. Most of the Earths around us (East and West) are like our world, save devoid of human life. Our Earth exists in an "Ice Belt", a series of worlds that are set in a colder period in Earth's cycle. Moving further West leads into a Corn Belt, and then a Mining Belt, thousands of worlds across each. What's revealed are the slight differences, the minute ways the worlds change as you go one step to the next, to the next. It's fascinating.

Also interesting are the occasional one of world that feature a radically different version of Earth. One is a world completely covered in water. Another is a world completely devoid of anything, perfectly smooth like a cue ball. Another is a blasted out desert, blown over by radiation. Each of these worlds, and many more, a called "Jokers", and part of what the books illustrate is that humans, and their version of Earth (which humans take to calling "Datum Earth") is its own Joker because of us. We're the anomaly.

But that's all setup, and a fascinating version of it. The story, though, really focuses on our hero, a "natural stepper" (meaning he doesn't need a Stepper Box to step but can do it at will, Joshua Valiente. His mother was also a stepper, although she didn't realize it. She got pregnant way too young (not her choice) and when she went into labor she freaked out, stepped one world over, dropped her baby out, and stepped back. Joshua spent time as the only person on a world right at the most critical of times, and ever since then he's preferred to do things his own way, to be alone often. Once Step Day happened and he realized he could step, he ventured off into the Long Earth and started exploring all the worlds.

Joshua is tapped by Lobsang, an artificial intelligence that thinks its a reincarnated Buddhist monk (or, alternatively, he's actually a Tibetan Monk who reincarnated into a computer). Whatever the case of his creation, Lobsang has become rich and powerful, working as the central A.I. for the Black Corporation (think Google but on steroids). Lobsang devises a ship, a dirigible that also has Lobsang's A.I. inside it, essentially making Lobsang. Wanting to venture deep into the Long Earth, Lobsang recruits Joshua to venture with him, and in the process they start exploring a variety of Earths as, in the process, other short tales of the various colonists of the Long Earth are told. And then as the adventure unfolds, a threat to to the Long earth makes itself present.

What I like about this book is all the Earths we see and the cool way the novel shows us how the worlds could evolve, one step at a time, across the whole of the parallel worlds. At the same time, though, the book isn't perfect. One of the big issues is all the stories the novel tries to cram in. Like with other Pratchett books, the story bounces across a number of different characters, getting all their stories and ideas and perspectives. Unlike those books, though, not all the stories told actually lead to anything (at least not in this novel). It's a lot of input, not all of which actually adds to the climax of the story or the whole of the novel.

Worse, there really isn't a proper climax for the novel. One threat builds after another, and the novel compounds towards and ending, but in a way it really ends on a cliffhanger without resolution. Things happen, a larger story is teased, but this book really isn't a complete story on its own. For all the great ideas the novel raises, it doesn't quite come together as a complete whole. It's a great ride without a great finish in the process.

And, honestly, it's all a bit dry at times. I don't want to blame Baxter for this even if, at times, you can almost see the chapters that were exclusively written by him and they seem to lack the natural spark that Pratchett puts in his writing. This was a collaborative effort and some sections of the book like the humor and whimsy that Pratchett normally brings. It tries, maybe a little too hard, but something is, at times, missing. It's almost but not quite there.

Don't get me wrong, I really enjoy this novel for all the big ideas and the cool things it does. But as a single, cohesive story on its own, the novel is lacking something. There are four more books in the series and we will get a few different resolutions down the road, but I prefer my novels to be self-contained as well, a single story I can enjoy that, while leading to something more, has it's own beginning, middle, and end that I can appreciate on its own terms. This book has a good start, a pretty strong middle, but it lacks an ending that allows the novel to stand on its own and, more than anything else, that hurts this book. It's good but it doesn't reach greatness on its own.