I've been critical of the previous books in this series, which is fair as I want them to be better than they are but, somehow, they always fall short of my desires. Maybe I'm expecting too much -- I have the same issue with Good Omens, a book so many people like but it left me cold when I read it -- but I just feel like there's a spark missing from the Long Earth series that, even four books in, the series has yet to find and capture. 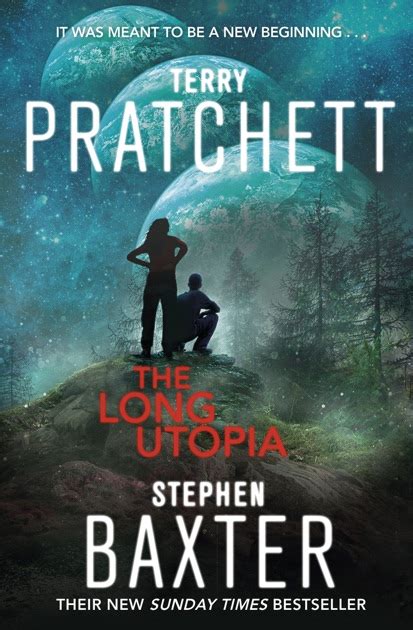 I bring up Good Omens because that book was a collaboration, just like this series of novels. That one was between Terry Pratchett and Neil Gaiman, where these books are between Pratchett and Stephen Baxter, but in both cases I felt like there was something that failed to get the novel to live up to what I wanted. Perhaps I just want something more Pratchett than the other authors -- I am picky about the authors I read -- and what I get isn't up to the "standard" I have in my head.

Whatever the case, I do feel like this fourth book in the series, The Long Utopia, it probably the worst of the series yet. It's still readable enough, but the book mires itself in a lot of story that just doesn't matter to the overall actual adventure of this book. There's a really solid plot line here, about aliens invading one Earth in the sequence and this causing a massive emergency that could span the Long Earth but, for whatever reason, the book spends a lot of time on a prequel storyline that, frankly, goes nowhere. Absolutely nowhere.

The important storyline concerns Lobsang, now going under the name of "George", and his now-wife Agnes as they head off to a remote Earth (picked out by their "friend" Sally, with friend in quotes because Sally always has her own motives). There they plan to raise a family with a little adopted boy and put their past behind them -- instead of stressing about the fate of the entire Long Earth sequence, their jobs now revolve around one Earth and a single boy. Unfortunately the Earth they're on is, apparently, doomed as a a new race shows up on the planet: the Silver Beetles. These aliens cross onto this Earth not by stepping East or West but North, a direction never before thought to be possible. And these aliens consume, taking over a planet and spreading, on and on. If they're allowed to spread across the Long Earth it could spell doom for everyone else.

Meanwhile, as this major storyline is playing out, much of the book ends up getting devoted the the history of Joshua Valiente's family. Specifically, his great-grandfather, a natural stepper (or, as they called it back in Victorian England, "Waltzers"). We learn about how these "Waltzers" aid the Crown, but the Crown wasn't always appreciative, and this lead to the group eventually setting up their own trust, a way to ensure the protection of natural steppers as well as furthering the bloodline. It's... all a bit squiffy, honestly.

The thing about prequels is that you have to have a reason for them to exist. Did we need to know where the natural steppers came from? Since it doesn't directly affect Joshua's abilities, his personal history, or add anything to what we know about him, I'd argue no. This is the kind of storyline that was probably included to show that natural stepping in the Long Earth isn't some new phenomena, but it frankly doesn't really add anything to our understanding of the novels. The story is so disconnected from the events of this book -- taking place in the late 1880s while the main story is in the 2040s -- that you have to wonder why it's even here.

If the authors wanted to explore a prequel about natural steppers, they probably would have been better off making it a different book, maybe with just a chapter at the end connecting it to Joshua. We could have had an adventure about Joshua's ancestor, not knowing who he was or how he was connected, only revealing that over time. It would allow us to get invested just in these characters without dividing out attention, and by not proclaiming how this guy would have to live to have Joshua's grandparent (and so forth) we actually might have been worried if he lived or not. There's not worry here, though, because we know Joshua has to come into being. The prequel undercuts itself, as so many prequels do.

Besides which, the Silver Beetle storyline is so much more interesting. These are bio-mechanical aliens that, in their home dimension, are locked in an interstellar battle with other aliens. These creatures move to a planet, setup shop, and start consuming, replicating and replicating, until the whole planet is basically just Silver Beetles, and then they launch themselves to another planet and go again. But then they discover a flaw in the Long Cosmos and are able to step onto an Earth. If they stayed here they'd consume it as well.

We even see this happening, as they build structures that start speeding up the Earth, causing its days to grow shorter but, in the process, also destabilizing the Earth. Their ultimate plans would lead to the destruction of the Earth, breaking it down into space rocks for easy consumption. And what if they did this on another Earth, and then another, and another. That simply couldn't be allowed, but our heroes have to find a way to stop them, and fast.

Honestly, I really enjoyed this storyline and if this had been the main focus on the novel I probably would have enjoyed it more. I just wish the novel didn't spend so much time on matters that, ultimately, didn't matter. So many of the books in the series do this -- The Long Mars had a big storyline about Sally and her father going to Mars and traveling its Long sequence to find Space Elevator technology, only for this book to discard it as a technological dead end, so what was the point? -- that I just wish they'd focus more and give us solid storylines.

This book meanders way too much and, like the novels that came before, ignores the big storyline often so it can focus on stuff that really doesn't matter. As I've said three times before so far, there's a kernel of an interesting story to this whole series. I just wish the authors could have brought that out instead of, well, everything else in this series, this book especially.