Take Up a Job

While it's understandable why Final Fantasy for the NES never made it off of Japanese shores -- it's a weird RPG that doesn't fit the mold of its predecessor and would have been a strange fit for the kinds of RPGs Western audiences were used to -- it does feel like we missed something special with the next sequel in the series: Final Fantasy III, also for the NES. This was a game that did everything the first title in the series did, but more, and bigger, and really feels like a lost gem from the Square NES era that only the Japanese got the experience. 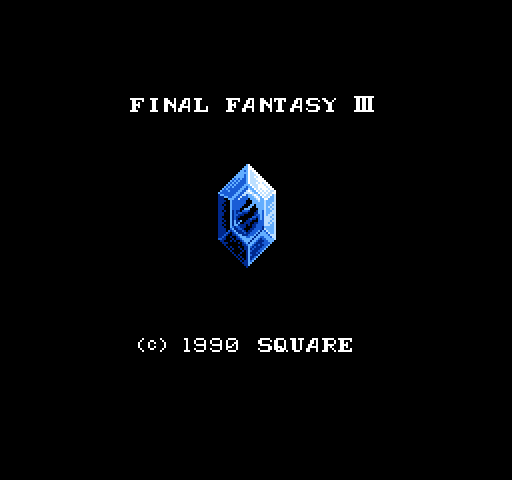 Of course, the same caveats that kept FF2 NES from moving outside its homeland also prevented FF# NES from moving outward: the original Final Fantasy took so long to come to Western shores that by the time a sequel could have come out, even a year later, the SNES was already ramping up and Square felt it was more financially prudent to just release the first SNES title as the next game in the series. It wouldn't be until much, much later that Final Fantasy III would see a wide release, in 2004 as a DS remake that changed a bunch of stuff in the process. The NES version remains one of the lost entries in the series for anyone wanting to play all of the series legally.

While we will cover the DS remake down the road (probably right before we get into the Final Fantasy VII Remake), for this article we're just going to look at this "lost entry" in the series, the NES original, and damn if this game isn't great. In a number of ways I wouldn't really call it ground-breaking -- it's the original game, just more so in so many respects -- but what it does it does really well, crafting an adventure that takes all that came before to make something great. It's such a solid adventure in the series that, considering it was the last title in the series for the NES, it feels like a fitting conclusion to the NES trilogy. It's the best version of the NES engine, a solid adventure with great scope, and enough improvements to feel like a proper sequel in all respects.

The game opens with four kids falling into a hole. These four, the Onion Knights, have arrived from the nearby town and have come to the shrine of the Wind Crystal. After defeating the boss guarding the cave, they touch the crystal and are granted a host of jobs they can take on -- the traditional classes from the original game: Fighter, Black Belt, Thief, Red Mage, White Mage, Black Mage -- and are given the quest to go forth and find the other three crystals unlocking their powers and using the jobs they're given -- things from class upgrades like Knight, the renamed Devout (White Mage), and Ninja, to Dark Knights, Vikings, and Sages -- and take on the evil that is spreading across the world, seeking to destroy the planet and plunge it into eternal darkness.

In the process they learn more about the world they live on, of which they are only granted a small sliver, a starting "Floating Continent" before the rest of the world opens to them. Centuries before the balance of the world was thrown off with the Light taking over, so four "Dark Warriors" showed up and helped to restore balance. Now, though, the evil Xande has used the power of the crystals to cause the balance to lean to darkness. That's why they four kids felt empowered in their quest: they're the new Light Warriors, there to once again restore the balance. And if they succeed in their quest, the balance will once again be restored and the world will be saved once more. 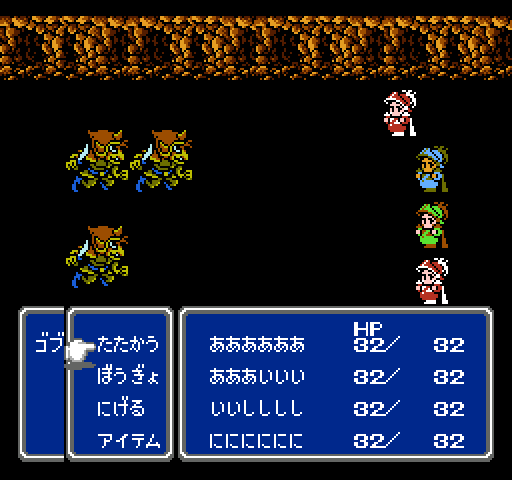 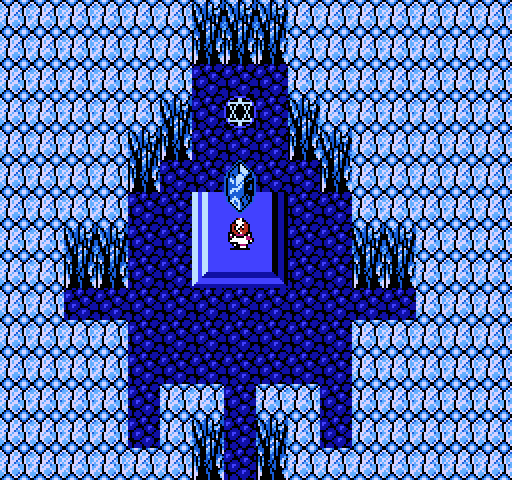 In essence, this game has a pretty similar plot to the original. You have your four Light Warriors and they go around lighting crystals and fighting back the darkness. While the overall idea is the same, though, the story beats are, thankfully, different. We have more interaction with NPCs, more little storylines to follow, and many more events that we have to evolve ourselves in. It's not as simple as just "go out, find dungeons, kill fiends, light crystals", and that works to the game's benefits since it can pull twists and turns out of its bag.

Maybe you're flying over a giant city and they get blow out of the sky, dropping into the middle of a civil war. Or perhaps you go to save a town only to find that some rich jerk has chained your boat, forcing you to fight him at his golden mansion for the key to your own ship. The game keeps changing up things, time and again, to help keep everything fresh so it doesn't just feel like another rote "light the four orbs because that's your job" adventure. That is much appreciated, frankly.

That said, while the game has a more detailed plot, one thing it loses is the sense of a wide open world where you can go anywhere, do anything. While the first half of the original Final Fantasy was pretty linear, the game opened up the second you defeated the Earth Fiend, Lich. From that point forward you could go get your canoe and then venture anywhere you wanted, finishing the game (with only a few exceptions) basically as you saw fit. That's not the case here as the game have a pretty rigid, linear storyline that you have to follow. You can't do anything at such and such town until you've completed a quest over here, and then after that you're funneled to another adventure without anywhere else to really go. The game doesn't really open up until right at the end when it basically doesn't matter anymore.

And then there's the last dungeon, which is actually three dungeons in total: a front labyrinth, a main tower, and a hidden dungeon underneath. If you want to be as powerful as possible you head to the secret dungeon (which isn't really all that secret since the game gives you the key item to unlock it as part of the main story) and get the ultimate weapons and the best classes, and spells, in the game. It's right at the end that the game basically dumps all the real goodies on you right when you have so little time to really enjoy them (which, really, is an RPG trope that I kind of dislike). 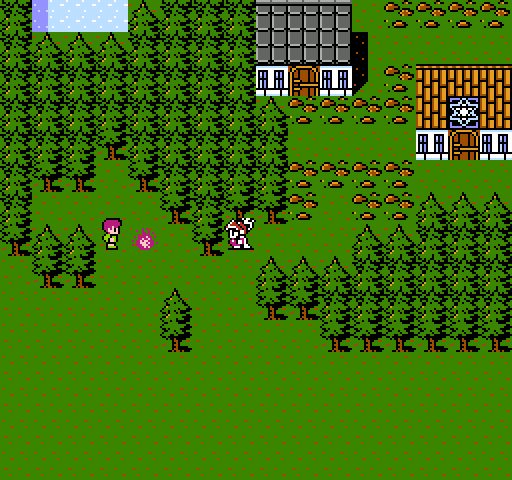 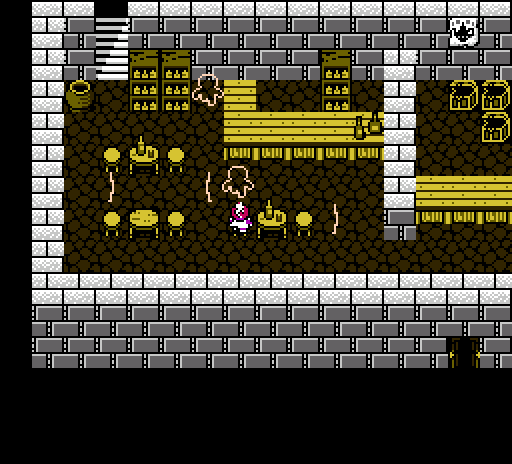 These nagging issues aside, though, Final Fantasy III brings something big to the table that really elevates it: the job system. The original title allowed you to pick your party from any combination of classes, which was pretty cool. While the second game eschewed that to, instead, essentially let you craft your characters from the ground up, any way you like, the jobs return here in this third game, and then some. Instead of being locked to a class, you can change your party up at any time, assigning whatever jobs you have unlocked to your onion kids as you see fit. All you need are the necessary skills points to switch jobs, which you earn freely from battles. It's pretty liberating since you can make any party you need, at any time, to suit any situation.

This helps to defeat one issue you could have with the original game: losing the game on the character select screen. If you picked a party that might not be suitable for the end game (say you didn't take a White Mage but your play style probably needed one) you either had to over-grind and suck it up or simply restart your game. But here, you're freely able to change as you want so there's never a worry about not having what you need when you need it.

There are a couple of caveats to this, though. The first is that the classes you learn throughout the game end up feeling like upgrades on the original classes, replacements instead of additions to. Once you unlock the Knight and the Viking, you basically don't need the Fighter class anymore, and the same goes for the Karateka over the Black Mage, the Devout over the White Mage, and the Magus over the Black Mage (to say nothing over the overpowered Ninja that essentially replaces all warrior types and the Sage that replaces all magic casters).

Beyond that, some classes are much more interesting that others. In my play-through I stuck to the Knight and the Karateka for the mid-game, over the Viking, because while the Viking could be powerful, I liked the guard function of the Knight (to protect my low-energy party members), and the Karateka could dish out ungodly bare-knuckle damage. Meanwhile, the basic magic in the game for the white and black casters was so good that I didn't really need any of the more exotic magic classes, like the Geomancer. Hell, I didn't even use a Black Mage because the magic available to the Red Mage was good enough. And my sad Summoner class only because useful right at the point where the best summons became available, and at that point I'd already unlocked the Sage and they could use summons, too. 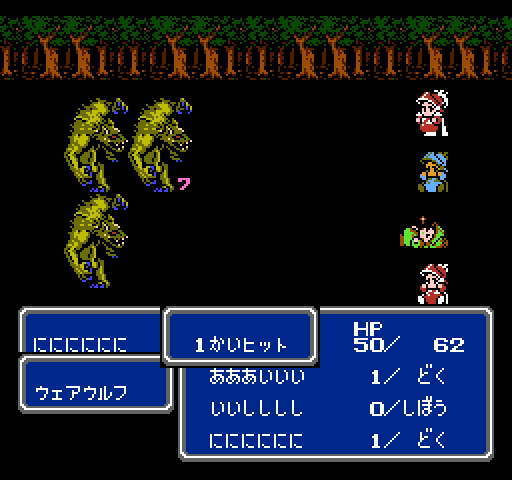 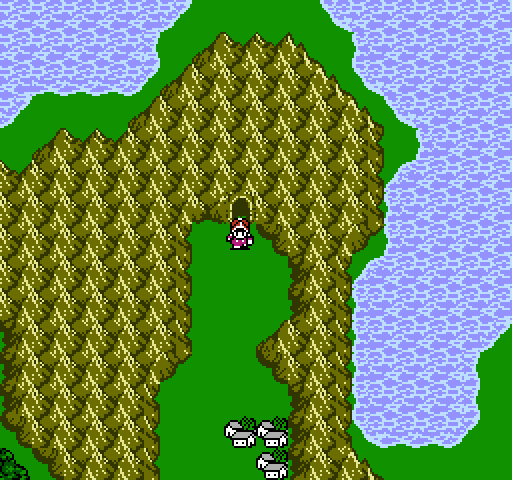 So, yeah, the job system, while great in spirit, certainly needed some tweaking. Of note, it'll return two games later, in Final Fantasy V, where all the jobs have more benefits to their continued use, and they all have skills that make them interesting (for the most part). But as a first attempt at this kind of system, it's amazing how well Final Fantasy III is able to do, especially considering the aging NES hardware. It's not perfect, but it's so interesting on its own that I did want to play with it further (and might just try some of the more exotic classes on my next time through the game).

That's actually something worth noting: unlike the second NES game in the series (which, while interesting for its own sake, is so weird and punishing), I actually want to return to Final Fantasy III in the future (and not just for the DS remake). The game is solidly balanced, with an encounter rate that feels fair and a leveling system that doesn't required you to spend hours grinding just to get the next level. Yes, you'll likely grind, but it's neither as punishing, nor as mind-numbing, as it was in the previous two entries in the series.

Really, everything about this game feels tuned to make it a more enjoyable, easier to get through experience. This is the NES era of Final Fantasy done right, and it's a real pity that this version of the game never saw a proper release outside of the Japan. While the remake is good in its own way (I've heard great things about it), this version deserved to see some kind of re-release before that, on the PlayStation when Square was doing its various collections, or maybe even ported to the SNES back in the day when Square realized the NES was on its way out. This is a great adventure in its own right making it sad that it's never properly see the light of day on Western shores.

If you can find a way to play this title, I highly recommend it. It's the best of the NES adventures, hands down, and a great conclusion to the NES trilogy. Final Fantasy II may have been too odd for its own sake, but Final Fantasy III is Square RPGs done right.