Will You Be Home for Christmas?

After the 2006 Black Christmas one could be forgiven in thinking there was no more steam left in the series (a series of two films, mind you, but many Holly franchises run out of steam after just two films). The remake took the idea behind the 1974 horror cheapie and completely bungled everything about it. I doubt anyone was sitting around in 2019 saying, "you know, we really need another stab, some pun intended, at Black Christmas." 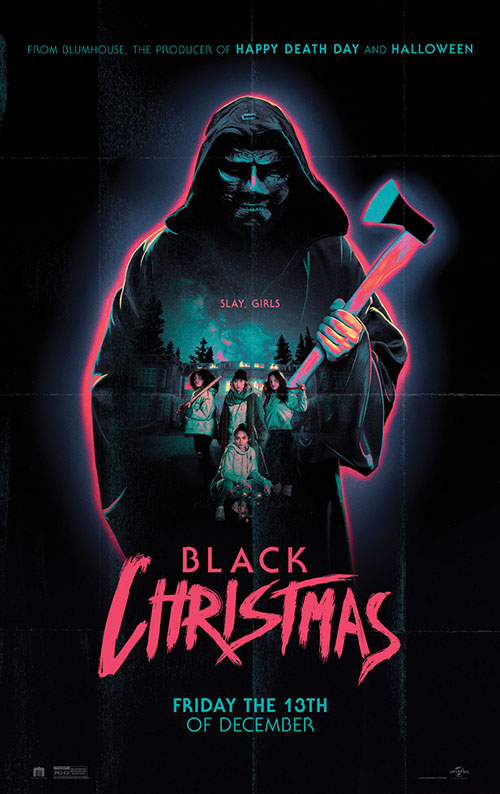 And yet, just one year prior, Blumhouse had found success with their reinvention of Halloween. It's easy to see the producers sitting there going, "the original Halloween was inspired by the original Black Christmas. Since we rebooted one, why not the other?" It's interesting to me how much these two film series parallel each other, finding reinventions around the same time, coming back with a stab for relevance (pun intended again) ever couple of decades or so. The logic is sound but, as with the previous attempt to reigniting the franchise, 2019's Black Christmas still fails to quite bring it all together.

The basic opening remains largely the same in this third attempt. A young co-ed, Lindsey Helman (Lucy Currey), talks on the phone with her sorority sister about plans for the holidays, and how Lindsey is heading home to see family. They say their goodbyes, and then Lucy is quickly attacked by a masked individual, her calls back to her sorority sisters drowned out by the loud holiday music they're listening to. We then cut to a group of sorority sisters -- Strong, but abused, Riley (Imogen Poots); feminist defender Kris (Aleyse Shannon); sweet Marty (Lily Donoghue); bubbly Jesse (Brittany O'Grady); and sophomore Helena (Madeleine Adams) -- all of whom live in a sorority house with a reputation for fighting against the frats on campus (in part because house-leader, Riley, was raped at a frat party a couple of years earlier).

Their reputation as feminist freedom fighters has made them enemies, not just among the DKE house (where Riley was attacked), but also with a professor, Gelson (Cary Elwes). The professor has a reputation for teaching a white, male, rather misogynistic perspective in his literary class, and Kris has put together a petition to have Gelson fired. It should also come as no surprise that Gelson is aligned with the DKE boys and their shared hatred of Riley and her MKE sorority gals. Things come to a head when, at the DKE Christmas Party and Talent Show, the MKE ladies (Riley included) put on a song and dance that calls the DKE boys out on their rapist history. Soon after, all the MKE girls start getting threatening DMs from the college social media app, the girls start disappearing one-by-one, and then, the next night, men in masks and robes break into the MKE house and start attacking the girls. The MKE ladies will have to fight for their lives if they want to survive the night.

As we can see, the 2019 Black Christmas has about as much to do with the original film as the 2006 remake (i.e., not much). Beyond the idea of sorority sisters getting picked off, one by one, by an unknown assailant, there's very little in common at all between the original in this film, making it largely a remake in name only. That's not to say this film doesn't have some pretty solid ideas, just that anyone who was a fan of the original film, coming into this film for anything remotely close to the original, would probably have left the screening disappointed. 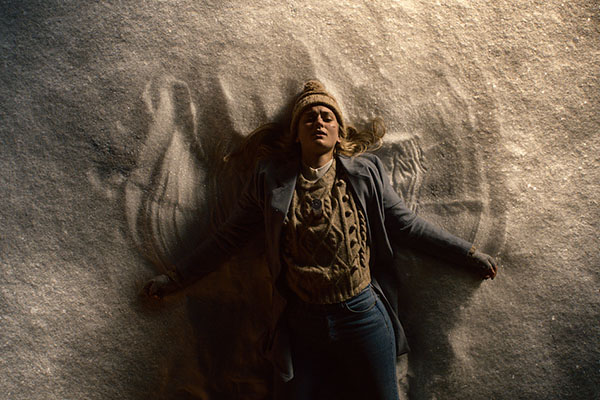 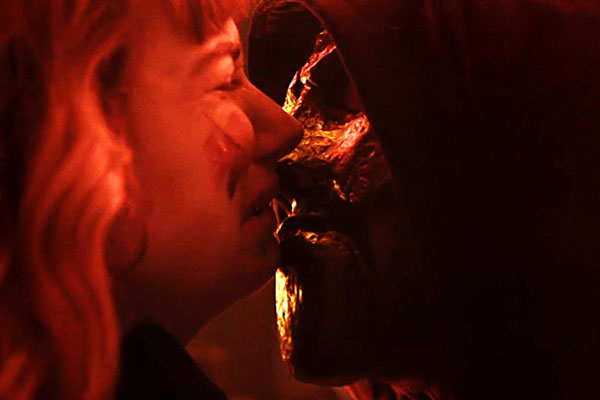 The original 1974 film came out at a time with Slashers were still a nascent genre, and the concepts and ideas Black Christmas played with were later fleshed out by other films. This newest edition of Black Christmas is, in its own way, forging a new path, setting aside many of the trappings of the Slasher genre -- it's not as gory, in puts a heavier emphasis on the build up for the scares and often doesn't even have an on-screen death of a character when they're removed from play -- instead looking to create something of a topical thriller. In that regard is has more in common with another Blumhouse horror film, Get Out, than it does with all the moves to come out in the Slasher genre since 1974.

In fact, I'd say Get Out is as much of an inspiration for this film as the 1974 original. Where Get Out used a sci-fi solution (chips in the brains of Black people to control them) to create a horror scenario that felt specific to Black audiences, 2019's Black Christmas uses it's setup (a supernatural setup as we learn deep into the film) to explore identity politics for women. The film doesn't have as deft a touch as Get Out, mind you, with its politics getting pretty heavy handed especially in the big climax of the film (where the villains go on a long speech about the superiority of men and the subjugation of women), but I can see what the film was going for. For a good stretch of the film, even the politics feel like they enhance the movie... right up until they don't.

It's in the climax of the film that the movie falls apart, sadly. Up until then, the movie had setup a frat vs. sorority storyline, with the guys of the frat house merely motivated by revenge against MKE for besmirching their name (a reputation, for all we see in brief flashbacks, they very much deserve). Had the film stuck to that and simply done a kind of Slasher-meets-Home Alone, I think it could have been successful enough. Instead we then get a twist where the DKE guys (and, eventually, all the men on campus) are brainwashed by the black magic pouring out of the bust of the founder of the university, which was also a raging woman-hater, and that's what's causing all the chaos. It's dumb, honestly, and it leads to a lot of over-the-top speechifying that grinds the film right to a halt.

I really don't know why the late game twist was put in. Up until that point the film made it seem like this one frat (and, bear in mind, just this one as no other frats are even really featured in the film) is full of a lot of bad eggs and that, if they were all a bunch of murdering rapists, taking them out would be a service to mankind. But making it into a black magic ritual which them brainwashes a bunch of the guys on campus gives the characters an out. "Oh, not all of us were bad even though we joined up with this frat." It betrays its own gender politics and muddies the waters of the story its trying to tell. 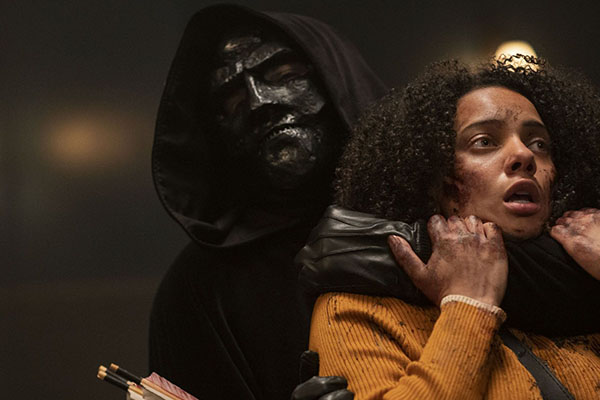 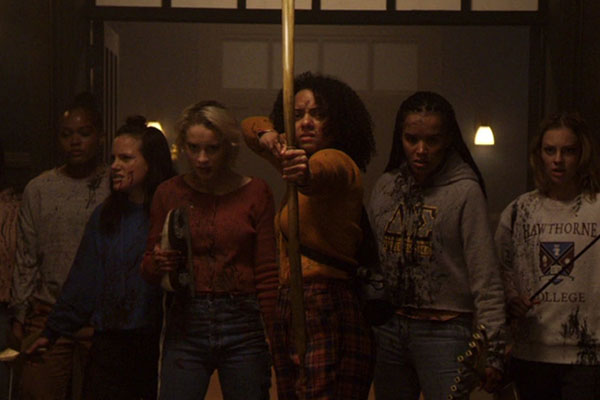 Plus, frankly, up until the late-movie twist, the film was fairly grounded. Adding in black magic out of nowhere, while certainly giving the film a justification for the "black" in its title, undercuts the reality of the story. Now we're talking about an alternate world, one where magic actually exists, and all the real, grounded parts of the story that the film was trying to convey -- how often women suffer from sexual assaults on campus, how often those stories are brushed off by the police, and then the reality of the frats closing ranks against the victims -- all of that is thrown out because, "this isn't our world, no matter how much it might look like it." It just doesn't work.

For a good hour of the film I really liked Black Christmas and even was in for the message the film was trying to convey. But that last act twist, and subsequent storytelling that went with it, just doesn't work. I found myself having to turn my brain off just to enjoy what I could, which I shouldn't have had to do for a film that started off so smart. In the end that leaves this third version of Black Christmas as yet another failed attempt at reinvigorating the series. I liked where the movie was going, making it a much nobler attempt at a remake, but I hated where it ended up. A sad misfire that started so well.

Drinking is the first sin we see, but then this is a college film so all of the characters in the film drink. If you asked the sorority, the sin was the frat boys raping their leader, Riley, while the frat would say the girls were at fault for making up the story when, clearly, they wanted to be assaulted. I gotta go with the ladies on MKE on this one.

Poor Lindsey just wanted to get home to her grandmother for a holiday breakfast. Sadly she caught the eye of the evil, black-magic possessed frat boys. Chased through the yards of the campus town, she's eventually pinned to the ground by her assailant who stabs her in the heart with an icicle. Her desperate attempts to escape leave a rather artful snow angel on the ground as her body is dragged away.