The original Black Christmas came out in 1974, before the big Slasher movie boom of the late 1970s and early 1980s. It acted as inspiration for one of the movies that helped really kick off that boom, Halloween, sharing themes with the later movie and helping to paint the way for the kinds of horror film that really worked within the genre. 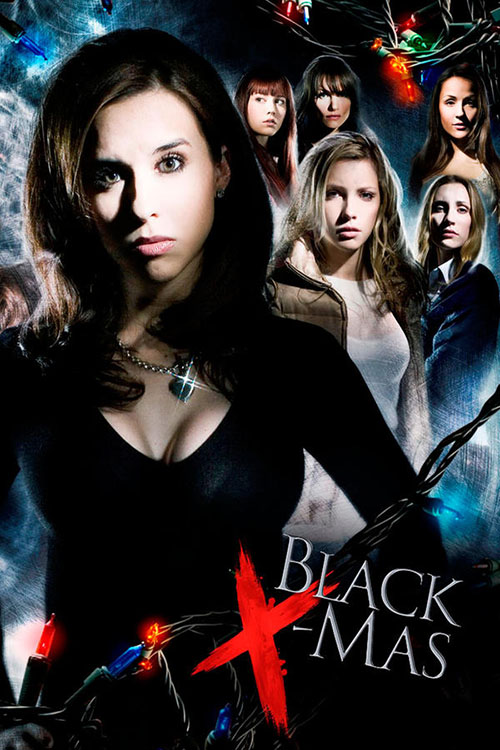 Cut forward a good three decades and Black Christmas finally had a follow up, the 2006 remake. Calling it a remake, though, really painted an inaccurate picture as this film has almost nothing to do with the original film. Aside from sorority sisters getting killer around the holidays there's not connective tissue between the films. This could have been a Sorority House Massacre film (a series that very much exists) and no one would have been any wiser. It's simply a cash-in film on the original name, a film name not that make people may have known about at all.

It's also interesting to note that this 2006 remake came out near the end of the second Slasher boom, which began in the late 1990s with Scream. That film, a smart and meta take on the Slasher genre, launched a huge number of knock-offs, most of which missed the point of what that film was trying to say... which, really, also happened with all the films to come after the original Black Christmas and Halloween. And, like all those other films to come after Scream, the 2006 Black Christmas completely misses the point of what both Scream, and the 1974 original, were trying to say. It is, in short, just a bad movie.

Like with the original Black Christmas, this 2006 remake opens on a sorority house as all the girls are sharing one night together before before they all head home for the holidays. Clair (Leela Savasta), one of the sisters, is preparing for a meeting with her older sister, Leigh (Kristen Cloke). As she wraps a presents and tries to write a card, she hears a noise. She goes to investigate, finds nothing, and then is murdered out of nowhere and, of course, none of the sorority sisters in the house hear anything. The rest of the girls still in the house -- Final Girl candidate Kelli (Katie Cassidy), sarcastic and world-weary Melissa (Michelle Trachtenberg), country girl Heather (Mary Elizabeth Winstead), done with it all Dana (Lacey Chabert), and drunken Lauren (Crystal Lowe) -- gather together to share presents and enjoy the season.

As they go around opening presents, one of them points out the present set for Billy Lenz. That's when we learn the story of Billy, a boy who used to live in the house. Hated by his mother (Karin Konoval), Billy watched as she killed Billy's father (Peter Wilds) one night, all before locking young Billy in the attic. Billy spent years up there, crawling around in the attic and the walls of the house, all before the mom got horny and decided to have sex with her son. This lead to the birth of Agnes, the inbred daughter of the set. Soon enough Billy killed his mother, and when the cops arrived he was eating cookies made from her flesh. 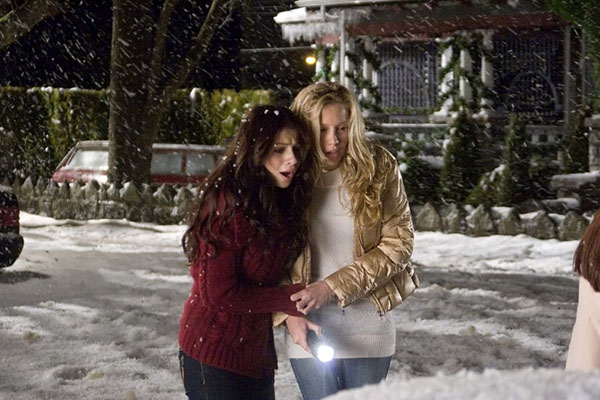 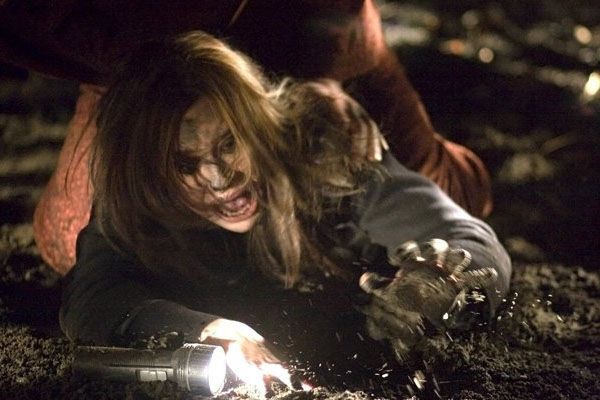 Cut back to the sorority sisters and we realize that Billy has escaped from the mental institution he was trapped in. But the timelines don't seem right and some of the current killings clearly happen before Billy can arrive. The girls start getting bumped off one by one and you have to wonder if one of them is in on it. Is one of them Agnes? How will the girls escape from this insane murderer and his twisted sister-daughter?

There are so many mistakes made in the 2006 Black Christmas that the film should be studied by horror film makers as a tutorial in how not to make a reboot. The fist and biggest sin the film makes is to explain the killer. As you'll recall from my review of the original film, we never learn anything about the killer; hell, in the first film we never learn the killers name, although a disturbing phone call alludes to two children, Ages and Billy. We never learn any of what that call means, we never understand who the killer is or what he's doing in the house. He just suddenly shows up, bides his time, and take the girls out, slowly, one by one.

None of that is in this film. Instead of being a creepy shadow we never understand, the film goes out of its way to explain everything. We have a long explanation about Billy is near the start of the film, followed by a series of overwrought flashbacks to Billy's life to hammer home just why he went insane and killed (and ate) his mother. Frankly we learn more about Billy than we do any of the sorority sisters, a complete inversion of the original film (which does this movie absolutely no favors).

Think about it: Billy is not the hero of this piece, he's very much the bad guy and, even with his back-story, we're never actually given any reason to root for him. He's not hunting down and killing the people that did him wrong (he does that in the flashbacks), so coming to this house and killing all the girls inside it isn't a justified reaction by any stretch of the imagination. Giving him a long history and detailed explanation doesn't make us like him at all; he's a monster and we need him to die. It's really the same problem we have with Michael Myers in 2007 Halloween remake: once he becomes a monster, we no longer care about him as a person, and all the back-story in the world won't change that. 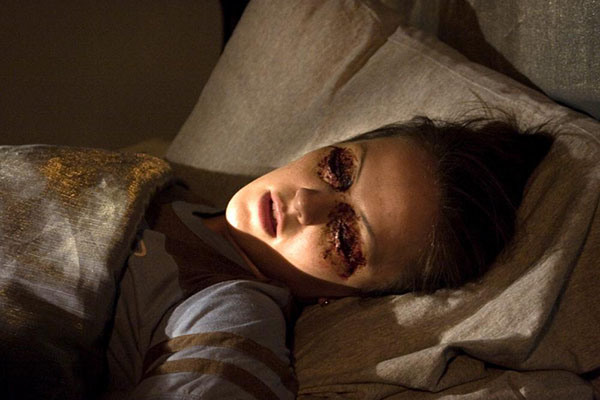 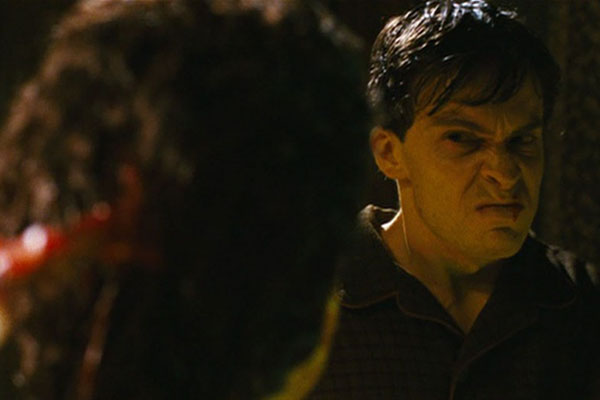 Meanwhile, because we spend so much time on Billy the film has barely any time to devote to the girls. We know nothing about any of them besides Clair (who has been fighting with her older sister for years) and Kelli (who is the only obvious candidate for Final Girl in the film), and one of the two of them dies in the opening scene of the film. Everyone else is just a single personality trait give to an actress to use before they're offed by the terror siblings.

The only thing the film is even able to come up with to make itself interesting is to try and spin a mystery of who the second killer could be: who is Agnes? Except, even then, the film betrays itself as, in a flashback, it's established that Billy rips out one of Agnes's eyes. As none of the sorority sisters have a fake eye, clearly none of them are the second killer and we can rule everyone out. That means there isn't even a mystery, just two monsters stalking a house, killing a ton of people very quickly.

The other major mistake the film makes it that it takes the body count way too high. This is a classic mistake we've seen in any number of Slasher franchises, HalloweenThe franchise that both set the standard for Slasher horror and, at the same time, defied every convention it created, Halloween has seen multiple time lines and reboots in its history, but one thing has remained: Michael Myers, the Shape that stalks Haddonfield. included. Creators think that what audiences want are more and more dead bodies but, in reality, we want to be scared. Despite the thought that more bodies equals bigger scares, it's actually the inverse. What's needed in a Slasher film is to keep the killers low but, instead, let the dread build, using the kills sparingly but effectively after we've gotten attached to the cast of characters. There's no one in this 2006 remake to get attached to, so the film goes overboard in kills (18, all told) instead of finding an effective way to make any of the kills interesting.

This is, without a doubt, one of the least scary Slasher films I've ever seen. Every kill is done immediately, lacking any build up, any tension, and anything scary about it. A girl wanders into a room of the house by herself, is immediately attacked, and then dies. Lather, rinse, and repeat throughout the film. If we could have just focused on the girls, learned about this, grown to care about them, and watched as a shadowy killer stalked them slowly, and effectively, as the dread and terror mounted, that would have been a great horror film. Oh, wait, we had that film, all the way back in 1974.

Drinking. We see a girl, struggling to write a holiday card for one of her sisters, drinking wine while she figures out what to say, using the alcohol as a crutch.

That girl hears a noise, sees movement in her closet. She goes to check, but finds nothing other than air from a vent moving her clothing. She sits back down in her spot, looks at the card, goes to grab her pen, and is then strangled by the murderer who puts a plastic bag over her head before stabbing her in the eye with her own pen.