It Can't Rain All the Time

When it came out, The Crow was a sensation. Based on a comic book, the movie became a favorite of the teenagers growing up at the time. It had a blend of action and comic book thrills, with the right edge of Grunge-era cool to really make it a solid hit with the under-18 crowd at the time. Plus, it managed to make comic book material seem serious instead of sliding into came the way even the Burton-era Batman films did. The Crow was something different. 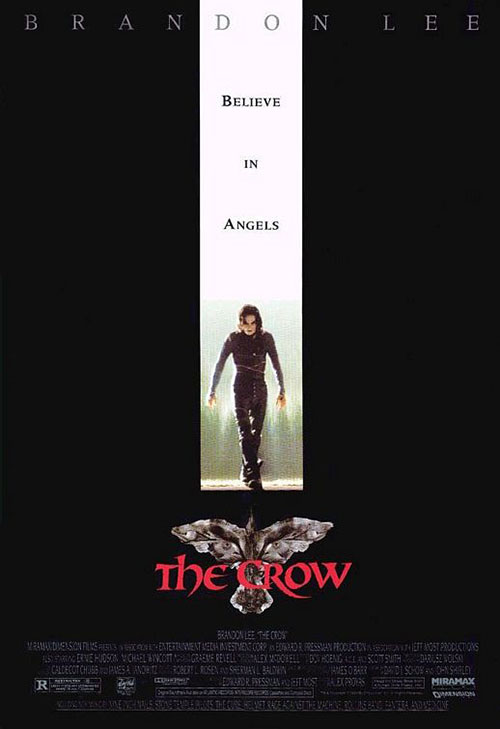 That said, I think a lot of the mystique around the film was more about the behind the scenes news than the film itself. Famously, and sadly, star Brandon Lee (son of Bruce Lee) died during filming the movie, an accident with a prop gun firing out an actual bullet due to the rush production schedule and poorly trained aides on set. His death gave the film a tragic pallor, but it also brought more focus on the film than it might otherwise have gotten. Instead of being a direct-to-video cheapie or a quickly thrown out theatrical release, Miramax picked up the film late in production and gave it extra money to finish the film.

Would The Crow have been a success if Lee hadn't died? I think the answer is probably not, but I mean we're talking all relative metrics -- bear in mind that it was a success based on its budget and when it was released, making $50 Mil against a $23 Mil production budget. In today's standards where a film isn't a success if it doesn't pull in at least $400 Mil, The Crow's anemic take seems pathetic at this point, but for the day it came out that $50 was quite the success for a dark and brooding comic book film based on a no-name hero. If star Lee had survived I dunno if it even would have made that much.

Telling a simple tale of supernatural revenge, Eric Draven (Lee) is brought back from the dead one year after he's murdered and his fiancee, Shelly (Sofia Shinas) is raped and murdered. They were killed because they had the temerity to try and fight the system, complaining about rent raises in their building and trying to fight the landlord. In response, a gang of four -- David Patrick Kelly as T-Bird, Angel David as Skank, Laurence Mason as Tin-Tin, and Michael Massee as Funboy -- show up and do the dirty deed. A year later a crow shows up at the graveyard where Eric and Shelly were buried, and Eric crawls out of his grave.

Motivated by the need to kill those that kill Shelly and himself, Eric dresses in Goth-chic and stalks the night, tracking down each of the killers and bumping them off one at a time. On Eric's side is the fact that, due to the magic of the crow, he is now effectively immortal, healing from every wound he takes. He can fight each of the goons that killed him and they don't stand a chance in response. The only question is if Eric's quest will end with the four killers or if he'll have to take on the heads of the criminal empire, Top Dollar (Michael Wincott) and his sister Myca (Bai Ling). 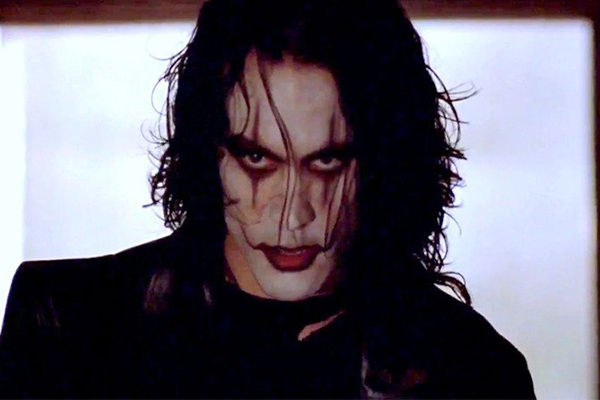 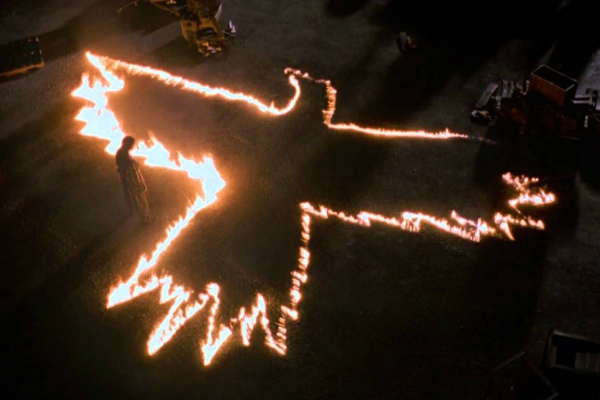 The isn't a lot of depth to The Crow. It's a simple story of horror and revenge, dressed up with a bit of magic and mysticism. It's a good bit of mysticism, don't get me wrong, with an interesting angle to how the hero gains his "powers" and why he's motivated to stalk the night. Considering that most of the heroes we'd seen at this point had been some kind of campy -- SupermanThe first big superhero from DC Comics, Superman has survived any number of pretenders to the throne, besting not only other comic titans but even Wolrd War II to remain one of only three comics to continue publishing since the 1940s., BatmanOne of the longest running, consistently in-print superheroes ever (matched only by Superman and Wonder Woman), Batman has been a force in entertainment for nearly as long as there's been an entertainment industry. It only makes sense, then that he is also the most regularly adapted, and consistently successful, superhero to grace the Silver Screen., Teenage Mutant Ninja TurtlesOriginally dreamed up as a parody of Marvel's Daredevil comics (going so far as to basically reproduce to opening shots of that comic's hero gaining his powers), the Teenage Mutant Ninja Turtles not only launched a sudden boom of anthropomorphic fighting animal comics but have, themselves, starred in multiple comics series, TV shows, and movies., Meteor Man, Steel -- The Crow was a very different kind of superhero film.

Lee certainly is part of the reason why the film works. He was a charismatic actor that helped to elevate the simple material, really selling his quest for revenge. Plus, he was as solid with the action as he was with her performance, making for a pretty good superhero action flick. Aiding him is a murderer's row of actors, from Wincott as the head villain to Tony Todd as the villain's main assistant, Grange, and Ernie Hudson as Sgt. Albrecht, a beat cop just trying to make the streets safer. It's a solid cast indeed that really makes the movie believable and grounded despite the fantastical nature of the material.

The film also has an interesting style to it. Directed by Alex Proyas, and filmmaker who, for years, was called a "visionary" on the back of this film (with releases like Dark City and Knowing billing themselves with "from the visionary director of The Crow"), this movie has a strange aesthetic to it. It feels like a dark storybook brought to life, as if somehow filmed on a sound-stage despite the large sequences filmed. It's pretty much unlike any other film I've seen (except for maybe Dark City, which also had this weird aesthetic) and it gives this whole movie a strange, but interesting, vibe.

It also helps that the action is pretty darn solid. The film features a number of fights as Draven works his way through the various goons. It all builds to a huge set piece in Top Dollar's club where every goon in the organization tries to take down our hero while he works his way through the whole organization all at once. It's one of the better gun fights in any movie of the era, an awesome, pounding sequence backed by a pretty solid Grunge Rock track. It's a solid show-stopper (even more so than the actual final sequence of the film which feels a little slow by comparison). 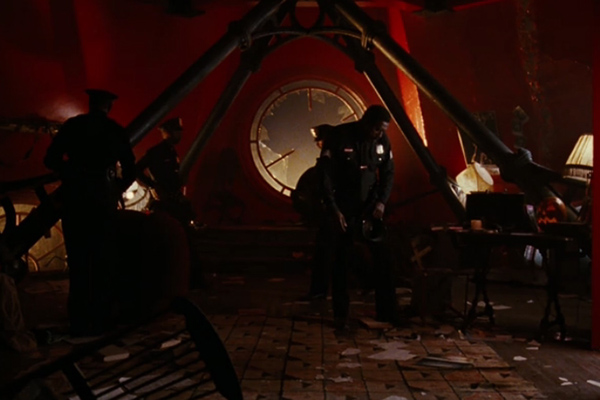 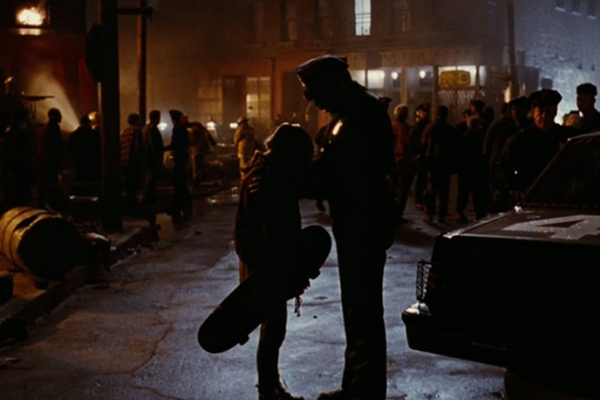 Watching the film, knowing that Lee died on set, you do start to try and pick out any instances where the film tried to work around the loss of its star. Some sequences where the film relies on behind the back shots and hidden faces for the lead could just be the stunt-double handling action but it also could be moments of "fake shemping" for the actor. Reportedly the intro of the movie was hardest hit as that was the one sequence that hadn't really been filmed before tragedy struck. And then there are sequences where the camera slows down and lingers on a freeze frame of the actor where you wonder if it was done as tribute to the actor, to pay respects and give us one last shot of Lee.

That does bring us back to our original point, because while I like the aesthetic of the film, and I enjoy the performances and the action, I don't think any of it is enough to make the film a true winner on its own. It made a decent amount of money when it came out, commensurate with its low-budget nature and simple story, but it really wasn't a huge money maker. Most of its reputation, and why it's lived on in the hearts and minds of fans, was because of the tragedy on set. If Lee hadn't died on set there's a very real possibility that the film would have just been a summer success before getting forgotten, a stepping stone for a rising star before he went on to bigger and better things.

Instead, though, the film was the last film for a star who could have been huge. Lee had the charisma and prowess of his famous father (who also tragically died while filming) and, had he lived, there's no doubt he would have been a giant of his generation. It's clear from The Crow that he could have been great. It's a fitting tribute to the actor that his last film has lived on. I'm not going to say The Crow is a bad way for him to go out -- I like this film fine and think it's one of the better superhero films of the 1990s, for whatever that's worth -- but I don't think anyone would remember this film if Lee hadn't died. It's a solid little film, but Lee was meant for greater things.