A Simple Fix for an Increasingly Awful Problem

I've seen any number of news stories recently about the "Student Loan Problem". Hell, I'm pretty sure both Last Week Tonight and Patriot Act both covered the issue in their most recent seasons. Clearly we're reaching one of those moments where the public consciousness is turning towards an issue, and I've seen enough that it feels like there's a real solution that could be had for the matter. 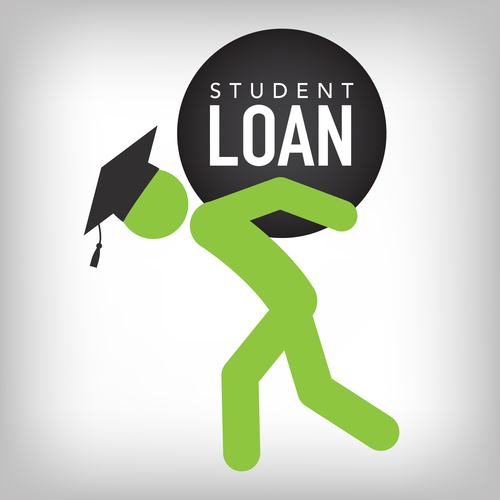 But first, let's establish the issue at hand. Currently, U.S. citizens are saddled with a combined $1.5 Trillion in student loan debt. That's the highest it's ever been, but that rise has happened recently and has outpaced the rate of inflation. As other outlets (those who do their research and are credible news sources) have noted, much of this rise came after the Obama administration tried to ease the burden of student loans by having the government take over student loans. It, in effect, made the U.S. government into a bank, one that gave out, and insured, these loans. In the process, the administration also setup a way to forgive these loans over time: work in the public sector for 10 years, and make regular payments on your loan, and anything leftover will be forgiven. In theory these changes should have helped -- get greedy lenders off your back and find a way to ease the burden in the process.

In practice, though, the situation was far from simple. For starters, the U.S. Government isn't setup to run like a bank, so the Department of Education worked with private companies to handle loan processing and management. These companies were supposed to work like agents, helping students get their loans from the government and setup regular payment schedules. Unfortunately it seems like most of these agents, instead, try to find ways to suck every last dollar they can out of the borrowers -- the longer a borrower has a loan for, the longer the company can take a percentage of the repayments. Then, when you couple that with the U.S. D.O.E. failing to process many of the forgiveness requests, and now with the Devos-led agency looking at scaling back (or eliminating) the forgiveness program altogether, the situation has gotten worse since the Obama-era changes, not better.

Student loans can be a real burden on the people that have them. Sure, the student willingly took on the loan and agreed to make their payments, but in most sectors having a degree is a requirement to get a job. Saying the student didn't have to get a degree is like saying they didn't have to buy a car, or find a place to live, or use utilities -- having a degree is just expected at this point and while you can live without it that shouldn't be the expectation. Unfortunately we've gone through a number of cycles of poor job growth in this country which has left most of the recent generation (and, probably, the next as well) suffering with high student loan payments while they struggle to find jobs. It's a situation that often feeds back on itself since borrowers have to defer loan payments until they can afford to pay, which only increases the amount of interest accrued, which then makes the payments larger, and on and on. It's a racket, really.

So how do we fix the problem? Honestly, there's an easy enough solution if the U.S. Government could just implement it: let's just forgive all the loans. Well, okay, most of them. This plan is simple:

Now I hear the screams of rage from a certain segment of the community. "You've just socialized education!" they'll yell. And sure, that's exactly what we've done here, but why shouldn't we? There's already socialized, government-mandated and government-run schooling that takes a kid all the way up through age 18 (assuming they don't skip grades or have to retake some years). Why should higher education, which is arguably just as necessary in our current job market as high school, also be government-backed? If people need it, the government should provide. That's its job.

Plus, let's be clear, there are plenty of ways to avoid abuse of the system. Colleges already have rules in place to prevent students from goofing off an entire year -- if their grades fall far enough, students can get kicked out of school. Plus, you will note that part of getting these proposed student loans is that the student finishes their degree. If they drop out, or get kicked out, they have to pay back the loan. No doing an end-run around the system, partying for four years, and then expect the government to just sign off on it.

That said, if a student goes to school, has to leave for some reason, and then, months or years later they go back to school again, the government would be willing (in this scenario) to forgive all the loans once a degree was attained; you do your part, the government handles the rest. This encourages everyone to stick with it, or try again, to get that piece of paper they need for a better life.

The best part of this whole idea, though, is that it's easy to pay for. Right now, as I noted, U.S. citizens have accrued $1.5 Tril in student loan debts (give or take a few million at the time of writing, and that number is as per Forbes and Make Lemonade). By comparison the recent "Trump Tax Plan" will cost the U.S. an approximate $1.7 Tril (this varies by analysis -- POLITICO has it has high as $2.3 Tril, while others, as reported by the New York Times have it betwen $1.63 Tril and $1.78 Tril).

It's all but assumed the Democrats will kill that tax plan when (and if) they take over the Senate and control both houses of Congress. This student loan idea seems right up the alley of a number of the Democrats (Sanders, for example), and it would probably take full Democratic control to put a proposal like this through. Kill the tax plan and swap in student loans.

It would actually be pretty easy to do this. There's a way to pass items through the Senate, once a year, called "budget reconciliation". If this method is used, the filibuster is blocked, meaning a majority vote would approve the proposal. All that's required at that point is that the proposed bill has to be budget neutral, which this is: by eliminating the tax plan as part of this forgiving all student loans actually saves the government $200 Mil in its first year.

But it's actually even more budget neutral than that since the $1.5 Tril is all the student loans accrued right now. After those loans are forgiven, we only have new loans coming due after that, which would be a fraction of the total student loan debt we currently have accrued. And then, when you factor that more people would have more money to spend (since they wouldn't have to pay back their student loans) and, presumably, could get better jobs down the road, this becomes a net-win for the economy. Certainly it's a better way to handle the budget than a tax cut that largely benefits the upper one-percent.

This really seems like something we should do. Now the question is if an idea like this can ever actually get enough backing to become a reality.

After posting this proposal in a couple of areas, I received a few responses that I felt should be answered (and added to this essay for posterity):

The problem is that it's cyclical. College has gotten so criminally expensive because of the availability of student loans and government assistance. Making it so that the few students that think ahead don't even have to worry about the cost or paying it back, alone, certainly will make the problem worse. The fix for that is, any school that takes student loan money can only charge x-amount per credit hour. Backing up a step from complete socialized college, though, put rules in place that student loans max out at x-amount per credit hour. Otherwise, for private schools, the.gov will only loan the state college rate.

This commentor also noted that student loans should be interest free, something I certainly agree should be the case in our current system. In answer to the rest of their comment:

If the U.S. Government wants to set specific credit hour caps as part of this proposal, I don't see a problem with that. Capping tuituon and keeping the increasing rate of tuition costs tied to inflation would be a good idea. That modification doesn't change how the basic proposal. I'll also note that I didn't say only "a few" of the students would get the benefit -- if you finish your degree, you get it for free, and that would apply to everyone. Maybe this encourages some people to get loans when their family could have paid for a college degree instead, or maybe some colleges decide to remove themselves from the pool of government loans to keep themselves "elite". But regardless, if a school wants government money (which most publicly funded colleges would) they'll take whatever provisions the government sets up. Then their students will essentially get free college once they finish their degrees.

Actually, there is a bigger problem your proposal ignores and what is driving up student debt - people not being able to complete their degrees. Student debt is outrageous for those who graduate only to have to take a job at minimum wage, but at least there is a promise of a better job tomorrow. People who take on debt but can't finish school end up in the worst of both worlds, and that debt continues to balloon.

While the responder went on to further suggest having employers pay for all schooling (a proposal that isn't without merit under our current system) or eliminating degrees altogether (something that I don't think is a good idea, nor do I think current education-related entites would let something like that fly). I don't want to answer their first point though:

My proposal assumes two things: One, that the basic structure of college -- students pay for degree, go to classes, get degree -- would remain in place. Just, instead of the students being on the hook for a completed degree, the government would pay for it. Moving further away from that would require a greater rethinking of our current system, and it would be difficult to get all parties (and lobbies) on board with that.

Two, that to get the proposal through Congress a "carrot-and-stick" approach would be needed. The carrot is the free tuition, while the stick is the fact that students have to complete their degrees. But, as noted, students are only on the line for the money as long as they have an unfinished degree kicking around. The second they enroll back in school, payments on their loans would stop (as it does now in our current system) and, once they finish up a degree, all the old loans go away along with their new ones. Win-win.