After picking up Mogworld and devouring it in the course of a week, I knew I'd had a new author I wanted to check out. The first book by Yahtzee Croshaw was funny and interesting, with a decent enough hook to carry the story through all it's weird narrative twists and diversions. With one book down I turned... back to Bram Stoker's Dracula to try and actually finish that novel (which I finally did, after much struggling, all so I could review it for my Castlevania site, The Inverted Dungeon). 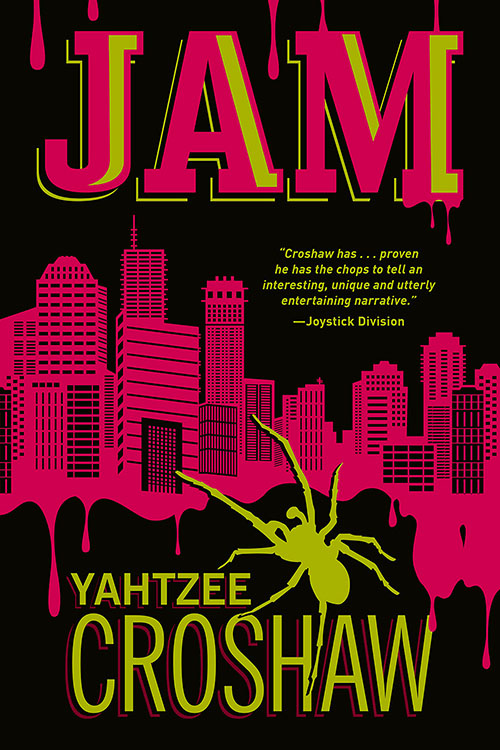 Still, I had it in mind to quickly turn back to Yahtzee's works the second I could, which I eventually did, picking up his second novel (as I like to do things in order): Jam. Set in Australia (although Croshaw was born in England, he spent a fair amount of time living in Australia, so this is a "write what you know" situation), Jam depicts the early days of an apocalypse, although not one anyone was prepared for. Instead of zombies, or disease, or nuclear annihilation, this apocalypse has been brought about by three feet of strawberry-scented jam. The issue, though, is that the jam isn't just filling the streets (and flowing through buildings) but it's also eating anything organic. We're introduced to this really early when one of the roommates of protagonist Travis steps into the jam and is almost instantly dissolved by the toast topping.

Regrouping back upstairs, Travis, along with his other roommate, Tim, quickly deduce that the whole city is covered in the sticky-sweet and oh-so-deadly condiment. Finding a couple of other survivors, including aspiring video-journalist Angela and game programmer (and total belligerent dick) Don, the team ventures out across the roofs of the city to try and find a way out of this... jam.

As far as apocalyptic stories go (of which I've read more than a few), I liked the way the early portion of Jam introduced the setting and got all the pieces moving. These guys aren't scientists or lab technicians, so spending a lot of time watching the apocalypse unfold (as is done in so many tales of this kind) would be pointless here. In that way, Jam has much more in common with zombie stories than disease-based apocalypse tales (or those that try to merge the two sub-genres together, like The Strain). This gives the book a tighter pace from the outset, avoiding all the hand-ringing and techno-babble so many other works about the end of the world tend to fall into.

Conceptually, too, it's hard to look at an apocalypse brought on by ravenous jam in any kind of good light. There are some (myself included) that would say, "man, this traffic is awful. When is the zombie apocalypse happening so I can finally get to work on time?" There's no upside to man-eating jelly, no way to avoid it short of sitting it out for weeks and just hoping it all goes away (if it ever does). Credit it due to Yahtzee for coming up with one of the weirdest, least desirable end-of-days stories I've ever read.

That said, I wasn't really able to get into this book the way I did Mogworld, this despite similarities between the two works. Both involve teams of random people thrown together when their way of life (or unlife, in the case of Mogworld) is suddenly destroyed, leading them to wander the world through a series of ever-complicating adventures before finally climaxing in a big reveal and final send-off. While Mogworld was able to sell this tale by constantly pushing forward, reinventing itself and twisting it's tale around to find new angles to explore, Jam gets mired in, well, it's jam -- the whole middle section of the book revolves around events at two civilized outposts, one at a mall and the other at an office building, with the two sides warring against each other.

As war between two outposts is an interesting narrative to follow in theory -- hell, many zombie tales mine that conflict for great storytelling. Here, though, there aren't really any characters at either outpost to actually grasp onto. The mall is filled with purposefully "ironic" hipsters who go out of their way to do everything "ironically" (including "ironically" murdering each other for the slightest infractions). This group gets tedious fast and none of the leads of the group (from Princess Ravenhair to Lord Awesomeo, "ironic" names they gave themselves) grow into real, interesting people, so all their evil, "ironic" actions never have any weight to them. The longer the characters spent at the mall the more I wished everyone in there would just die, devoured by the jam, so that was could more on from this set-piece and never look back.

Not that the office building was any better. This group were all overblown caricatures of middle-management and upper-management flunkies. They're each given a single task to perform (like the gardeners, the HR reps, the office manager) and so little personality that they never become "real" people to me. They're a collection of office drones, a bunch of names without a basis in personality, so whether they lived or died never mattered to me. And this is a seriously problem as probably a good two-thirds of the book is devoted to the conflict between the mall and the office building and I just couldn't care about any of it.

But then I couldn't care about the main characters either. Each and every one of them are little more than a single personality trait or desire, like Don and his need to be a complete dick to everyone around him, or Angela and her desire to film every event of the apocalypse as it happened, getting to the "real truth", so to speak). They don't relate to each other, or have any kind of meaningful conversations. They've just characters on the board, moving around from place to place until one or more of them is finally eaten by the jam.

And I think the issue really boils down to the fact that the main character himself is pretty lackluster. Travis isn't a person, so much as a passive character that gets pushed around by everyone else, guided by fate simply to show up and be around to watch whatever everyone else does. He's never given any agency, never shows to have a single though to desire of his own. His big, heroic action is to save a giant spider (and keep it in a Tupperware container) early in the book (because civilization might need spiders, somehow, when it rebuilds?) and then make sure to keep her around at all times. Oh, and he calls her "Mary" just because. I liked Mary (who was written to actually react like a real person despite the fact that she was just a spider in a plastic container for most of the book), but I hated Travis. That doesn't say much about the protagonist.

Jam, then, is an interesting concept without a story to really build off of it. I've rad more than a few books like this (two of which, The Stand and Cell, were both written by Stephen King) where the lead up to the apocalypse, the early days of the end of the world, is more interesting than seeing the survivors live in it afterwards. Like those stories Jam starts great before petering out from a lack of direction and no idea how to finish its story.