Does Anyone Really Want to Be a Hero?

I like to read. It is among the many media-based past times I do enjoy. However, along with being a slower reader than I'd like, I'm also pretty picky. Having spent a long time writing my own webcomic (See: CVRPG), I've gotten pretty critical of other people's dialogue (say what you will about my sprite-based comic where the heroes don't do much and I try to avoid action whenever I can, but I sure do write a lot of dialogue). It's hard for me to find a writer I like whose characters actually talk believably. 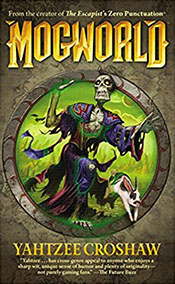 When I do find an author to read I tend to gobble up everything they've written, and then go back and reread it all again. I did this with Stephen King when I was much younger (until I grew out of his works finding them all to be, largely, the same at their core). I did it again with Robert Asprin (right up until his output essentially stopped and he started teaming up with other authors creating much lesser works in his oeuvre). Most recently my author of choice was Terry Pratchett. I dug through all of Pratchett's Discworld series as well as his later Long Earth books (a team-up series with author Stephen Baxter). Sadly, Pratchett died a little while ago which left a hole in my current reading needs.

Thankfully I think I've found a newer author to populate my reading list: Yahtzee Croshaw. Those of you who have spent enough time on internet gaming sites will recognize Yahtzee's name as he's the creator of the web-review series Zero Punctuation. That series is a lot of fun with Yahtzee's deeply acerbic voice giving his reviews a dark, sarcastic bent. I watched a lot of his videos back in the day, right up to the point where I had then-caught up with his archive and had to wait for newer material to come out. When I hit this wall with any web series I tend to wander away and forget they exist (webcomics that don't update at least three times a week are hard for me to follow). I don't know if he advertised his novels (of which he has more than one) on his series, or if that series is even going still, but I was happy to see his name on a cover wandering a bookstore one day, so I elected to give him a try.

Mogworld is Yahtzee's first novel, written all the way back in 2010. The story revolves around Jim, a student wizard killed (in the prologue of the book) when his school is attacked by the nearby barbarian school. He dies, goes to some version of a peaceful afterlife, only to then be brought back sixty-some years later by a necromancer. Zombie Jim then spends the rest of the book learning about his unlife, running from danger, and eventually (and reluctantly) becoming a hero as he finds out the true nature of the world he lives on and what it means for his life, his death, and the very state of reality itself.

I will fully admit that Mogworld hooked me from the first couple of pages. It's a breezy read that moves along quickly but, more importantly, it's also really funny. Yahtzee has a good voice in his writing, transferring his wit from his online series quite naturally to his book. His characters are well-realized, deriving their humor not only from what they say but the situations around them. It is a very dry humor (as you'd expect from a British comedy writer) but that doesn't stop many of the scenes and moments in the book from being laugh-out-loud funny. I found myself reading more than a few passages back to my wife as I was reading because I wanted to savor them a second time.

While I liked the characters and the dialogue, I will admit the book does have one glaring flaw. About halfway in there's a big twist that's revealed and, from the way the book is written, it doesn't seem like Yahtzee anticipated his readers figuring it out ahead of time. Despite this, though, I had pretty well figured out the twist within the first chapter. Being able to figure out what was happening and where the story was going did ruin the overall experience for me but I could see how other readers, already having figured out the twist, might set the book down figuring they've already gotten the experience out of it. I didn't mind, but I can see how others might.

Overall, though, I think the book is quite enjoyable. If you don't see the twist coming it probably would have a solid impact for the reader. More than that, though, is that the book is still funny and well-paced even after the twist. It's a fun, light read set in a fantasy world with an acerbic main character who happens to be a zombie. For most fans of comedy fantasy, Mogworld is going to be a great read.

Here's hoping his next three books hook me the way this one did.