Just Tryin' to Get By

Will Save the Galaxy for Food

I'm starting to have mixed feelings about Yatzee Croshaw's books. I like his writing style -- easy, conversational, certainly not too verbose but just detailed enough that you can easily imagine the scenes and vistas he's writing about. My issue with his books is not in his basic technique but with the stories he chooses to tell. 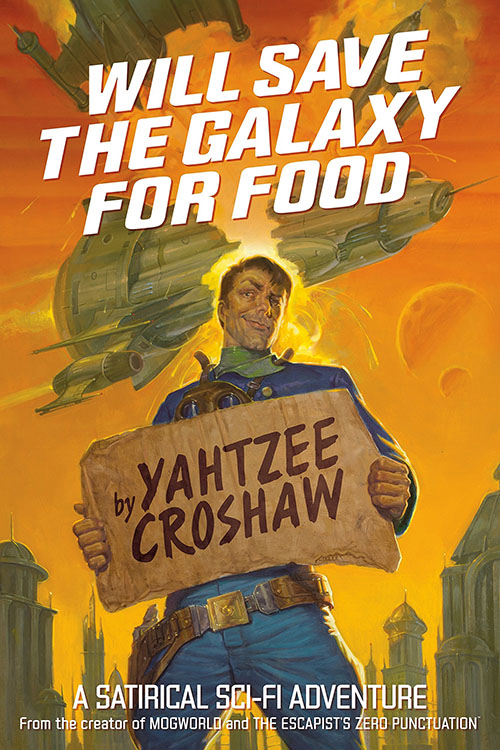 Case in point: Will Save the Galaxy for Food, a book I finished months ago and then sat on it because I couldn't motivate myself to write a thousand words on the topic. Considering that I can write about just about anything, good or bad, for this site my utter ambivalence to the book is pretty shocking. It's neither so good I have to rave about it nor bad enough to write a long rant. It's just... there. It's a book, one that was moderately amusing when I read it and then totally stopped caring about it the second I closed the cover.

Will Save the Galaxy for Food follows the exploits of a nameless protagonist (nameless because he's used several identities in the past and the name he's given throughout the book, Jacques McKeown, was not by his own choosing) who used to be a great hero in the old interstellar wars. He'd fly to a planet, team up with the locals (whatever "alien" race was there, although since they were the locals technical our protagonist was technically the "alien"), fight off the bad guys, and then return home to bask in the glory. That all changed, though, when travel gates were invented. People no longer had to spend weeks in a ship to travel from point to point (often with a war hero, like our protagonist, guarding them) when they could just step into a gate at one end and be anywhere in the universe at the other side.

When we pick up with our "hero", he's scraping by, giving tours of old haunts to rich tourists aboard his ship, the Neverdie. However, when one of his little exploits turns south, he has to find some way to scrape the cash together for his legal fees. That's when he falls in with Ms. Warden, a high-level executive working for Mr. Henderson (a disreputable, but very rich, man who also seems like a stand-in for Donald Trump). The protagonist is cajoled into taking on the guise of Jacques McKeown, the reclusive author of many various famous space adventure books. Our hero has to fake being McKeown as he takes Henderson's son on a tour of the galaxy. In the process, though, he'll get wrapped up in all kind of antic, accidentally kidnap Henderson's son, and possible just save the galaxy once more.

From the outset, Galaxy seems to have the same kind of central protagonist as Croshaw's last two books: reluctant to be on the adventure and, in general, not to fast on the uptake. McKeown in this book is at least a little more proactive than the kid from Jam, but he's still not much of a hero for a story such as this. I think Croshaw wanted McKeown to come across as a down-on-his-luck Han Solo-type, but the character never has the wit or charm of Solo. Plus, Solo had a bunch of people around him that motivated him to be a better person -- left to his own devices it's doubtful the Solo we know would have ever grown to be a hero (no matter what the revisionist Solo: A Star Wars Story wants us to think). McKeown certainly doesn't have that kind of crew around him, so he knew grows into a ruffian with a heart of gold. He just sucks throughout.

There is a time and a place for intractable, awful protagonists. Croshaw's first book, Mogworld, arguably had one of those with Jim, the undead mage who just wants to find a way to finally die for real. But in that book Jim at least found a path to heroism and grew as a character (even if only slightly). By the end of it, he's willing to sacrifice himself to save other people, even after he's realized he doesn't want to really die. He grew and changed. McKeown in Galaxy never has that kind of arc -- by the end of the story he's essentially the same character he was at the start of the book. A little richer, sure, but it's hard to argue that anything that really happens in the book was because he stepped up. Most of the events would have occurred with or without him, which isn't a great look for a hero.

Put another way, McKeown is even less effective in his own story than Indiana Jones in Raiders of the Lost Arc -- the only think Indy managed to do was accidentally help the Nazis find the Ark of the Covenant a little faster, and then take the Ark to the U.S. Government after the Nazi's killed themselves with it. McKeown kind of has that latter moment in the book (which I won't spoil), but for the most part he spends his time on missions that don't really tie into the main part of the book, bungling his way ineffectually through all of it). He's a terrible hero, which makes you wonder how he stayed alive for so long before the book started. He has a history as a hero (that we're told about in passing), but you'd be hard pressed to believe it from the way he acts.

Regrettably, McKeown is also the best character in the novel. The rest of the characters around him -- Warden, Henderson's son Daniel, Daniel's friend Jemima -- are all either totally clueless idiots or, worse, actually malicious agents of chaos. None of them are worth protecting, let alone being the kind of people that would be useful on an adventure such as well. You don't grow to like them at all, which leaves McKeown as the only character you can really bond with (as, as noted, he sucks).

It's a real shame, too, because the world Croshaw crafted around these characters is pretty great. The universe is rich and detailed, with many diverse settings, from Luna City to an Asteroid Belt colony out in "the Black". Everything has a richness of description and a lot of interesting politics going on behind the scenes. In a different adventure McKeown would be someone on the periphery, an agent we'd see from time to time who has his own business going on in the background. The focus, though, would be on the power-players and their activities. McKeown is, in effect, a footnote in his own story.

There are ways to salvage this book, but it all comes down to either ditching McKeown as the lead character or, instead, finding a way to make our hero actually interesting. I want to like this book, to enjoy the world Croshaw has crafted. I just wish we have a better tour guide to take us on this adventure.