It's Time for A Heist In the Big Apple

There are a number of Internet idiots that rail about how "women are taking over all the good roles in movies." They complained about how the female-driven Ghostbusters or Rey in Star Wars somehow killed their childhood. Obviously they are way more invested in their childhood passions (or stuck in a misogynistic head-space, which is probably more accurate) to realize that diversity of ideas makes media better. The best ideas come from a crew of people working together, but giving their input, and ideally that input with come from a number of voices of different genders and ethnic backgrounds. Sadly, Hollywood is predominately white and male (just like most of the nerds watching the films, which I'm sure creates a kind of feedback loop on both sides of the equation). 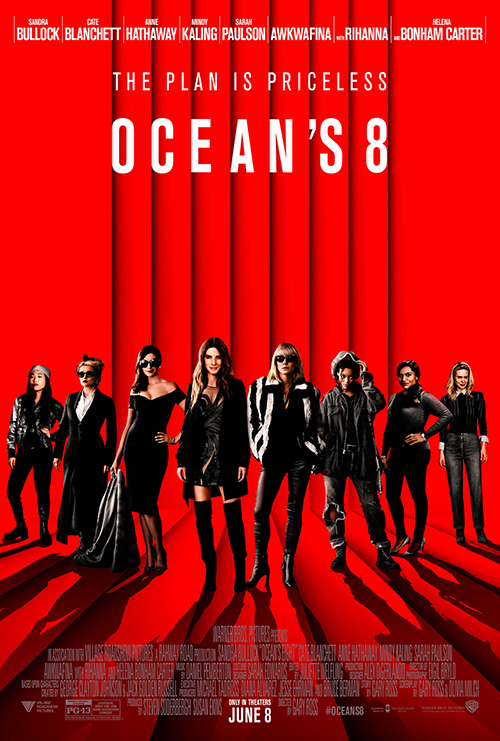 Clearly, I am not one of the people that would be offended by an all-female film like Ocean's 8. The idea in its own right doesn't cause me to question the movies I saw before -- those were certainly male-lead films, but there were a few female characters in the films that, from time to time, showed they could hold their own with the men on both sides of the law. Having a group of female criminals work together certainly doesn't strike me as outside the rules of the Ocean's universe. And really, considering how stodgy the previous trilogy had gotten (with Twelve being such a misfire that Thirteen went running back to Vegas to essentially remake the first film).

New blood and new ideas (along with 11 years off) were needed to make the franchise feel fresh again. Despite the all-female cast for the leads, the change in location (from Vegas to New York) and a different director behind the lens (Gary Ross taking over for Soderbergh), this isn't a reboot of the series (despite what pre-release materials indicated). This film takes place in the Ocean's universe, a sequel to the overarching themes (even if it feels a little more like a spin-off or back door pilot).

In the film, Debbie Ocean (Sandra Bullock), Danny Ocean's younger sister, has just gotten out after spending five-plus years in the clink. Sent there by her then-boyfriend, Claude Becker (Richard Armitage), when the cops scooped the two of them up in a heist gone wrong and he rolled on her quite willingly simply to save his own bacon. Five years later she's out and ready to settle the score, but, you know, also get back into the family business of taking a lot of money no one would really miss. After meeting back up with her long-time business partner, Lou (Cate Blanchett), the two put together a crew of ladies so they can infiltrate the annual Met Gala and steal a very expensive necklace priced at over $150 Mil. You know, the family business, more or less.

The film got a lot of criticism early on for essentially making the ladies pull a "lady crime", going after jewels while dressed to the nines instead of doing as Debbie's brother would and robbing a casino. To me, that's a rather reductive way of looking at it: Debbie's plan hinges on the ladies getting in and out without being noticed, and one of the best ways to pull that off is to be at a place where a lot of women would be, all congregated together. Sure, maybe they could have done an all-women political luncheon as the setting for the heist, but the jewels there probably wouldn't have been as good. And it's not like the movie doesn't address this, having the characters themselves debate the merits of the kinds of scores they could go after, from banks to the like, dismissing those as they're a lot of work for a lot of danger. The Met job, though, seems to have a low risk ration for the big score. 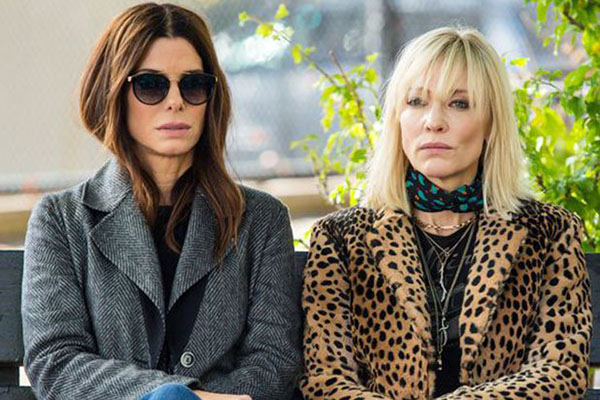 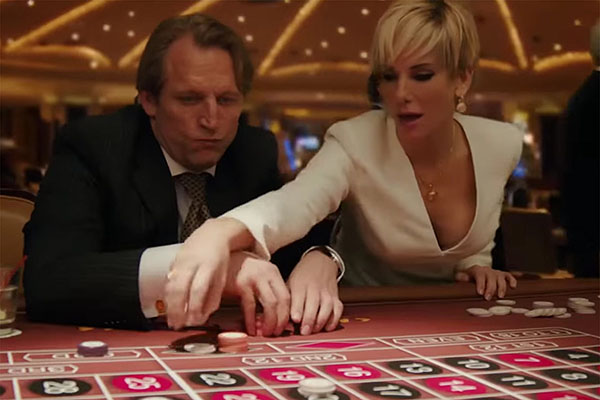 If anything, the characters seem to have everything put together so well that the Met Gala job almost seems beneath them. The thing about the first of the original trilogy of films was that you never were quite sure the crew was going to pull off the score. Sure, they acted self-assured and confident the whole time, but they played up enough of the angles that could go wrong that the con always seemed one step from collapsing. That's what gave the movie its thrills. Eight, though, never really comes up with that level of danger. There are a couple of passing nods at it, but nothing that ever feels like events are spiraling and the ladies have to regroup and find a new way to work the plan. Even one snag they run across (and unexpected locking mechanism) is dealt with only a scene later, and rather quickly at that.

The movie also doesn't really give us much reason to want this crew of women to succeed. The original movie pitched itself as 11 guys against a really terrible guy; sure, they were stealing a bunch of money but they were doing it from the worst piece of scum in Vegas. This was something the sequels always ensured was there, some villain to play off of so that even while the guys were pulling crimes, you cheered from them because it was a kind of "good triumphing over evil" tale.

Eight struggles to give us a villain. Sure, the guy that screwed over Debbie works as a kind of foil for a few scenes, but he never directly interacts with the crew in any meaningful way, certainly not to directly connect him to the plot to make us feel like the heroic criminals are stealing from him. Hell, they don't actually steal from him at all, instead stealing from a jewelery store, Cartiers, without the film giving any indication why stealing from that corporation is the right thing to do. There really isn't a motive -- Cartiers just had the necklace and that was that.

Still, the film glosses over a lot of this, breezing by on the cool attitudes of the characters and the fun they're having together. The main duo of Debbie and Lou have the most fun, being a great two-woman act through most scenes of the movie. Bullock and Blanchett give the film much of it's energy, being two cool customers that, occasionally, have a bit of winking fun. They keep the film going, the tone light and breezy, and make the caper work despite some narrative shortcomings. 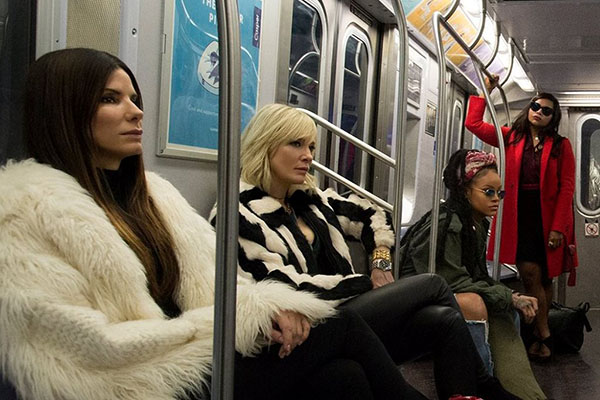 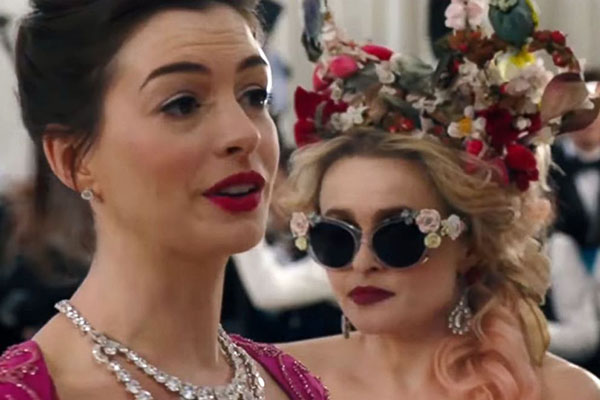 I just wish we'd gotten more. There are eight characters in the film -- the eight members of the crew -- but I'd say we only really get to know four of them as real characters. Debbie and Lou, of course, are the main leads, but then we have Helena Bonham Carter's Rose, a designer making the dress for the main star of the Met Gala, Anne Hathaway's Daphne Kluger. We come to know and enjoy these four, but the rest of the crew, from Rhiana's Nine Ball, Sarah Paulson's Tammy, Awkwafina's Constance, to Mindy Kaling's Amita, don't get the same level of attention. They're in a lot of scenes, and shown to be competent at what they do, but there's just not enough time to feel them out as real characters, to know them and enjoy them as full members of the crew. More scenes of them plotting, planning, and joking around would have been great.

Ocean's 8 is fun, a good, laid back caper film that feels like a proper continuation of the Ocean's franchise. Due to it's flaws I wouldn't put it up there with the best of the series, Eleven, but it's certainly a good film in its own right. If they make a sequel (and considering it did better than the original films at the box office, I'd guess that's likely) I just hope they can improve upon this film to make something even better.