Let's Go Back to the Beginning, More Or Less

Prequels are, by their very nature, hard to pull off. A prequel comes out after an original story is already released and, due to the constraints of the starting tale (some characters appear there, certain events are already canon), the primary job of a prequel is then to inform those later events and characters. It's the rare prequel that can stand on its own without having to constantly call back to earlier (in released date) works. Most prequels that do work usually set themselves at such a great distance (25+ years for the second season on Fargo, hundreds of years between the various Zelda games, 4,000 years for Star Wars: Knights of the old Republic) that they act less as "prequels" and more simply as side-stories exploring the world itself. 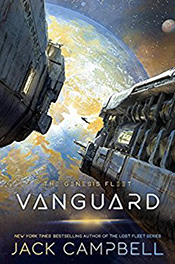 Of course, then you have prequels that hardly do enough of a job to justify their existence. It's easy to pick on the Star Wars prequels (of which we have reviews of Ep. II and Ep. III) since those did little more than show us events about Darth Vader and his extended family we more or less knew from the original trilogy. However, even the recent Solo shows that it wasn't just Lucas that sucked at making SW prequels -- Disney could whiff it hard, too (Solo is a fun flick, sure, but it's also beyond inessential). In short, prequels aren't easy.

I say all this because, recently, I picked up The Genesis Fleet, the first book in series of prequels to the Jack Campbell-penned The Lost Fleet series. The books are set a distant period of time in the past from the main series, back before the big governmental Alliance was formed. In theory this would allow the books to tell a set of stories exploring parts of the universe without all the storytelling needs of the main books. In the book kind of does that. Unfortunately it also spends way too long doing wink-nod gestures towards the main books, too.

The main story involves Rob Geary (distant multi-great-grandfather of John Geary, hero of The Lost Fleet), recent Earth Colonies ex-pat who, along with his technician colleague (and love interest), Ninja, moves out into the distant, unpopulated stars looking to start a new life. They end up on Glenlyon, but when a criminal threat from Scatha, another distant colony, threatens the peace at Glenlyon, Rob is tasked with leading the planet's new fleet... of exactly one under-powered ship. They're eventually joined by Mele Darcy, a Marine and fellow ex-pat, who comes to Glenlyon for a new life and ends up having to lead the planet's ground forces against the Scatha threat.

This A-plot (which sometimes breaks into a B-plot as Rob and Mele are doing their own missions at the same time in different locations) does a good job of setting up the world of Glenlyon without getting too mired in the "look, this is setting up the world you know" storytelling prequels after succumb to. That said, it's not hard to see parallels with the original stories, what with a battle between an underpowered military hero and the corporate/criminal aggressors. The original series had the Alliance ships battling against the Syndics and, to a lesser extent, also battling politics and bureaucracy, while this new book has Geary battling criminal ships (working from some distant, criminal authority) while also dealing with political leaders that don't know what they're doing. The situations in the new book feels all to familiar and while it's fun to spend more time in the universe, I don't really think I came away with any new opinions of it.

Plus, let's be honest, the book is clearly pro-military with two heroes, Geary and Darcy, who are written obviously knowing more than the "leaders" they have to deal with. In both cases, too, they're true-blue good-guys without a trace of worry about their actions or conflict over what they should be doing. Everyone else, from the political leaders (who are largely written as feckless and inefficient) to the criminal leaders (who are barely shown at all except as people to shoot at), are barely characters at all. It's a very lop-sided way to tell a story.

This also doesn't take into account a C-plot on another planet involving a politician and a ex-Mars conflict resolution expert. This story gets a lot of time at the start of the book and then just peters out half-way in to focus on Geary and Darcy. Getting a plotline from actual political leaders showing them in a different light would have been great, but since the plotline largely goes nowhere (and then disappears for the back-half of the book entirely), what could have been a more nuanced take on the universe falls rather flat.

That's not to say there aren't joys to be had in the book. Campbell's dialogue has improved during the course of him writing this whole series, and the lead characters in The Genesis Fleet sounds the most like actual humans (and not just archetypes) yet. Geary, Ninja, and Darcy all act like fully realized people and while they might all have very black-and-white world views when it comes to the military and what "right" actually means, you at least enjoy being in their presence during the proceedings. That's what makes the book frustrating, though -- while his characters are becoming more human, the situations they wind up in are getting more basic, less nuanced. The Genesis Fleet takes a good step forward in some regards, and then stumbles backwards in others.

I still find just enough to enjoy in The Genesis Fleet: Vanguard to stick with the series (there's already a sequel out and, apparently, a third and final book is planned), but I will admit that Campbell's writing is just off enough for me that I could easily see ditching him if anything takes a turn in the next novel. It's hard for me to recommend this particular book to readers new to the series, but if you read The Lost Fleet you'll probably like The Genesis Fleet well enough. It's more of the universe, but certainly not Campbell's best work.