The Good Guys are Good, and the Bad Guys... Aren't Bad

After The Lost Fleet finished its run, I think it was pretty well expected that there would be further books in the series. Sure, it was a pre-planned set of six novels that told a (more or less) complete story, but there were other series that did that too. The Lord of the Rings may have been a set of three books, but everyone really wanted to know what happened after, when Frodo settled down and started a chain of falafel huts with his ol' pal Samwise. And it's the same thing here. 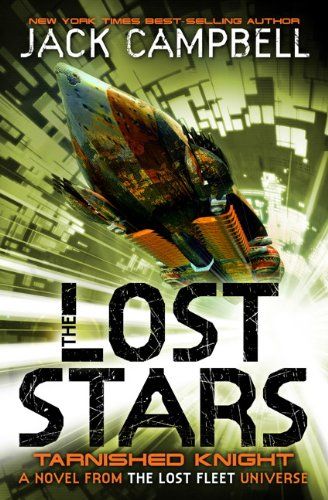 What's interesting is the number of directions the series went from there. I'm already deep into reading the various new books as part of Beyond the Frontier, the continuation of the story for main character Cpt. Geary and his fleet of ships. We also already covered the first book of prequel series The Genesis Fleet. Here, though, we have a parallel story to Beyond the Frontier, a set of novels not focused on Alliance personnel (or their ancestors), but a group of one-time Syndicate operatives who decide that working for their overlords now no longer appeals so they take matters, and their solar system, into their own hands.

Unlike the previous books we've covered, The Lost Stars is shaping up to be a fair bit more morally grey. One of the big complaints I had with the original books was just how perfect everyone was. All the lead characters had unshakable morals, could never possibly do anything even remotely wrong. Hell, by the start of series continuation Beyond the Stars, now-Admiral Geary had married his second-in-command, and yet while on board their flagship they couldn't even share a kiss, let alone the same stateroom, for fear of the whiff of impropriety. In a time of war a character like that works, but after seven books it does get a bit tiring.

That's what's really different about "Tarnished Knight": the characters in it aren't perfect. The Syndicate was always shown as a morally compromised bunch of corporate criminals -- to be fair, that was the perspective on the characters from the view of the Alliance, but the Syndicate never did much to dissuade that view during the original books. Here we see that, use, it is true that the Syndicate was far from perfect, but we also learn that the people working for the government didn't always have a choice and might, maybe, have been half-way decent people if given the chance. They aren't "good", though. They're calculating and paranoid, willing to rule with something approximating an iron fist (at least in this first book) until they are shown a better way.

Of the two lead characters in the novel, General Drakon and President Icen, Drakon is the most like Cpt. Geary. Although a former Syndic, Drakon has a strong moral center and doesn't like to compromise. Unlike Geary, though, he will compromise, and make mistakes, and do things that he should do as a commanding officer. This imperfectness makes him a more realized character, more interesting to read about. Icen is more morally flexible, more at the ready to do whatever it takes even if it doesn't make her look great. She's a good balance for Drakon but, unfortunately, writer Jack Campbell doesn't really have as good a hold over her character (at least not yet). He's clearly more comfortable writing ram-rod straight paragons of virtue and Icen is just far enough out of his wheelhouse that he can't quite figure out how she works.

The story of the first novel follows the two leads as they first take over Midway from the Syndicate government and then, later, begin securing their borders and moving to other systems to set up "alliances". I put that in quotes because the treaties are general in Midway's favor, not the other way around. Again, these aren't good people even if they're trying to do what's best for their home system.

But then, that's another shade of complexity since you're never sure, at least with Icen, if what's "good for the system" isn't really just another way of saying "what keeps us alive and in power". Getting more of her story, figuring out how she really ticks, would help the novel immensely (and I'm hoping that's a shift that happens as the novels go on). There's more to her character, we assume, but she's as closed off to us, the readers, as she is to those around her so it's hard to get any kind of bead on her long-term plans.

That kind of nuance, though, could aid the series moving forward. It's certainly possible that the novels eventually build to a stand-off between Icen and Drakon, or they could be open up, become fuller characters, and their alliance could grew strong. One book in it's hard to say just yet.

What I can say, though, is that this was probably the best of the novels in the whole over-arching series yet. Even with the few minor flaws to the storytelling I enjoyed this book. THe characters were interesting, with just enough flaws that they seemed to be actually human, and with the stakes against them, it will be interesting to see where the stories go from here.