You're Our Last Hope

When I get a new book I tend to take my time with it. I'm not a fast reader, but I also like to enjoy my books and savor them. Thus, when I pick up a novel of moderate length, I can trust I'll have it for a week or two at least (and usually longer) before I need to find something else to read. I especially like it when I find a series I can get into since it means I'll have a few months of solid reading and I can really invest in a universe. 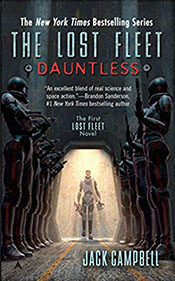 This is what happened when I got a bunch of books from my father. In the whole stack was a series titled "The Lost Fleet", a set of six books set in the distant future. The main character is Captain Geary, a man out of time who was nearly blown up when his Alliance ship was attacked by Syndicate vessels. He managed to eject his crew and make it to his escape pod, shooting him out into space in cryo-sleep. Unfortunately, his pod was damaged during the assault and the transponder beacon didn't go off properly. Thus, for 100 years, Geary floated out in space in suspended animation.

He's found after all that time and resuscitated. The future he finds himself in is still fighting the war the Syndicate started. The Alliance has sent their whole fleet to the far end of Syndicate space on a last ditch effort to broker a truce. All the higher-ups in the fleet, ever admiral, goes over to the Syndicate ships, leaving Geary in charge of the fleet (since, after 100 years, he's the longest serving captain around even if it's only on a technicality). The Syndicate forces, of course, betray the Alliance admirals and kill them all. This forces Geary to take the fleet and try to find a way to fly them all home back to Alliance space, on a route that will lead them through dangerous star systems and will take several months of travel (and a set of six books).

The Lost Fleet is a crunchy sci-fi series -- pretty hardcore about the physics in places with just enough speculation and improbable tech to soften the science some. All the ships in the series use a kind of slipsteam tech to traverse great distances between star systems -- there are entry and exit points at stars that can be used to essentially slingshot ships to other systems (without actually having to fly quickly around planets to build up the speed to do so). Plus there's some kind of space-tunneling system that the humans have also built that grants them even faster travel via a series of gates. While there may be some basis in theory for these kinds of tech, none of them are scientifically possible currently -- of course, if you want to have stories about humans traveling the stars and have the story resolve in days or months (instead of millennia), you pretty much have to include some kind of tech like this.

More realistic are the space battles, of which there are many. Within star systems ships move at fractional light speed (point-one light is regularly used in the books). Because the ships are moving so fast, combat is less like the naval-style battles of Star Trek (where ships slow down and fire at each other), instead operating as hyper-quick aerial runs. Wings of the fleets fly past each other, firing in an instant before they've both flown past and are out of range again (and have to sweep around for another pass).The combat is relayed in technical detail, giving you and understanding of what's happening and how it all works. The author clearly loved writing these sections of the book and wanted them to seem as realistic as possible (for the setting, of course).

While the space combat, along with all the military and governmental details, ring true, the actual characters aren't quite as well developed. Geary comes across as a fully-realized figure largely because we spend the entire series seeing the world through his eyes (this is a 3rd person-limited set of books). The rest of the cast is less developed, though. The captain ends up with a couple of different lovers over the course of the series and neither of them feel like real people, more like plot points to get through to move Geary down a path. Most of the crew on his ship (the flagship, of course) are interchangeable -- despite having their names repeated multiple times, I barely remembers any of them. Some of the other captains of the fleet fare better simply because they're given time to grow, but even after six books I couldn't really remember more than two of three by name (out of the hundreds of commanders in the fleet).

So no character development wasn't the best in the series. If you're looking for solid military sci-fi with a crunchy bent, this series will probably suit you just fine. My issues with the characters notwithstanding, I still rad all the books. Heck, I'm still reading them as the author came out with a sequel series, The Lost Fleet: Beyond the Frontier, as well as a spin-off series, The Lost Stars, and a prequel series, The Genesis Fleet. Needless to say I'll have plenty of crunchy military fiction to read for a while.