Into the Dark of Daylight

At this point, here in 2022, Christopher NolanMade famous when his second film, Memento, became an art-house hit, Nolan became a household name with his Dark Knight trilogy, quickly becoming one of Hollywoods biggest directors. is considered one of the great directors of the age. With hits like Batman Begins, The Dark Knight, and Inception, no one doubts his technical prowess behind a camera. Sure, some of his more recent films have shows more style than substance when it came to the stories (Tenet has an absolute garbage plot), but they are very handsomely directed, for sure. 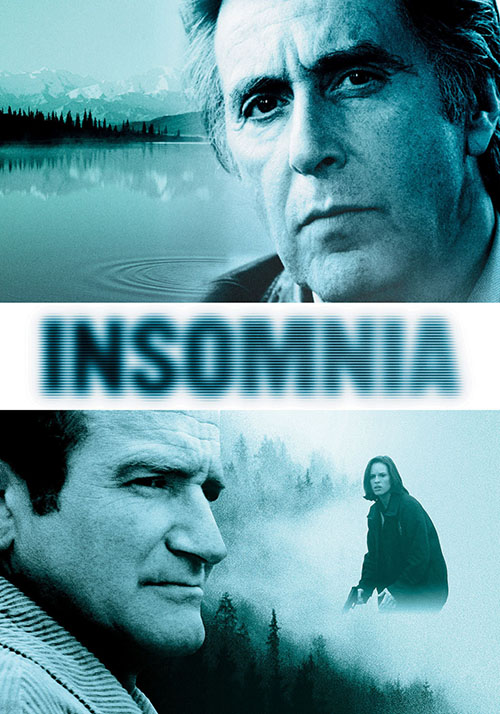 Of course, you can trace his directorial style back to even his early works, the mind bending and weird Following and Memento. While those were made on smaller budgets they still showed a director that understood controlling character, style, and substance to make a deeply involving movie. I would argue, though, that Insomnia was the film that really showed hiss technical skill, but with his actors as well as with effects, to create a film much greater than just its working parts.

If you've seen Insomnia then you might be going, "wait, I don't really remember any effects in that film." And, from a certain perspective, that's true. This wasn't a big budget action or superhero flick, not like the films Nolan would come to make. Insomnia is, instead, a smaller thriller based on a 1997 Norwegian film of the same name. But what it lacks is explosive action set pieces (even if it has a couple shootouts) it more than makes up in evocative lighting, murky staging, and mood. A whole lot of mood.

The film takes place in Nightmute, Alaska, a very small town far enough north that the sun basically never sets in the Summer. The town saw a rather grisly murder, the death of teenager Kay Connell. The teen was found dead, naked and bruised, but the body had been meticulously cleaned, not just because the killer was hiding evidence but also out of some perverse need. This killer, whoever they were, loved Kay but also hated her, and now that they'd killed once there was no doubt that eventually they'd kill again. Into this case comes detectives Will Dormer (Al Pacino) and Hap Eckhart (Martin Donovan), L.A. cops sent out of the city to avoid an Internal Affairs investigation. A previous case has some logistical issues that could explode in the department's face so Dormer (a tried and tried serial killer hunter) and his partner were sent up north to stay out of the spotlight. Plus, maybe they really can help solve this case.

They end up working with fresh-faced detective Ellie Burr (Hilary Swank), a cop with great instincts who doesn't get the respect of her squad. Burr looks up to Dormer, wanting him to train her as they solve this case. But things take a turn when Dormer accidentally shoots his partner, Eckhart, while in pursuit of Kay's killer. They chase the suspect into a fog bank, things get confused, Dormer mistakes who he was shooting at, and Eckhart ends up dead. Did he mean to shoot his partner because, just maybe, Eckhart was gonna go rat out Dormer to I.A.? Was it an accident? Who would believe him if it was. Certainly not the killer, Walter Finch (Robin Williams), who saw the whole thing. Now Finch wants to be buddies with Dormer, thinking they're both now killers so they can see eye to eye. It's a game of cat and cat and mouse, then, as Dormer tries to solve the murder legitimately while hiding the truth about his partner's shooting, all while the sun never sets and he can't get sleep and the guilt tears him apart. 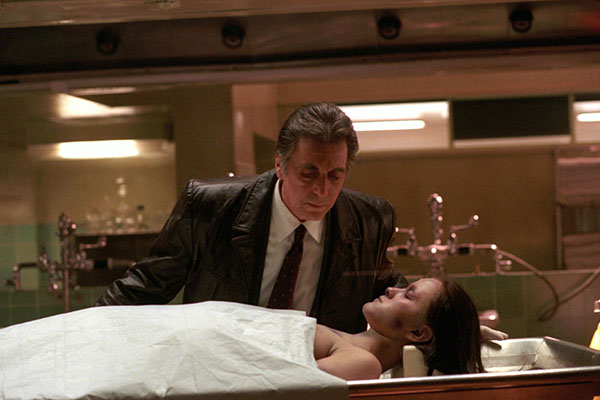 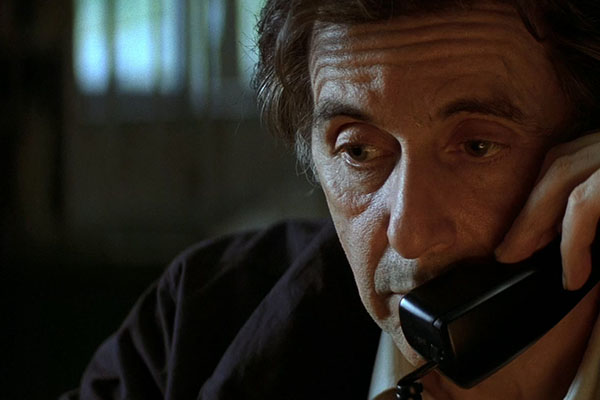 This film is about many things -- murder, abuse, cover-ups -- but what it really comes down to is guilt. We have to lead characters, Dormer and Finch, each dealing with their guilt in different ways. Dormer didn't mean to shoot his partner (at least, not entirely), and the guilt of not only this bloody act but also the cover-up after, tears at him. He can't sleep, he says because the sun is so bright but really it's because of everything going through his head. His insomnia is due to his own actions more than anything else. And, really, it goes back to even before he came to Alaska, since he'd cut corners on his previous case. He says he did it for the right reasons, but that's one more reason to feel guilty and punish himself.

Finch, meanwhile, killed a girl he loved. Yes, she was thirty years younger than him and looked up to him as a mentor (giving us shades of the Dormer and Burr relationship in this film). Him killing her wasn't premeditated but, in a way, it was also a long time coming. A lonely guy living in remote Alaska who suddenly finds someone that seems to care about him, only to then get rejected when he opens his heart to her, that was the triggering event. He says it was an accident, to try and parallel himself to Dormer, but ass we learn more about the killing it was anything but. He snapped, but it was a snap that was inevitable. His guilt has warped him, made him a cold blooded killer, and he can never find his way (so to speak) back into the light.

The dynamic between the two leads is what drives the film as the story takes a slow path to analyze both of them, most specifically so we can really get into whether our protagonist, Dormer, is a good guy or a bad guy. The answer resides somewhere between the dark and the light, in a gray area that (due to his insomnia) Dormer seems to live in for days at a time. The film doesn't directly judge him, instead letting Dormer judge himself. But it's not his own life he looks to change (or not) via his actions. More he wants to make sure that Burr doesn't follow his path, that he doesn't corrupt her the way Finch ruined Kay. That's the real lesson Dormer learns, up north, when everything in his life goes to hell, and it makes for a very satisfying tale.

The way the last act plays out is, actually, very different from the original 1997 film. That Norwegian film seemed to absolve Dormer of his actions, letting him skate on the crimes (even if he couldn't escape his own guilt). The ending of this film is changed enough that Dormer doesn't necessarily get away with everything but he does take enough action to redeem himself, in a way. He pays for it, but his character is more deeply fulfilled by his final actions this time around, and that really deepens the whole film. The ending is what really makes the piece. 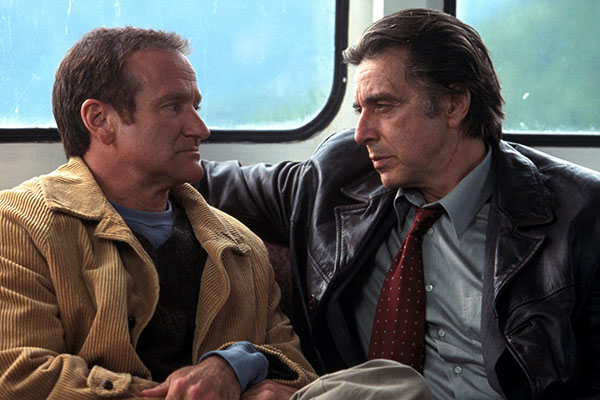 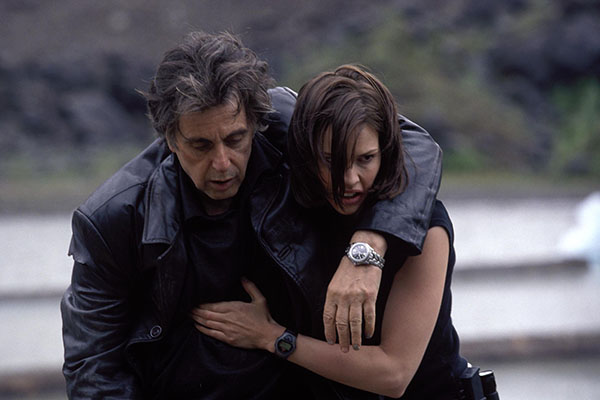 But through it all, Nolan bathes the film in murky light to match the murky story. I've read think pieces likening the style of Insomnia to film Noir. It uses hard light from the constant and oppressive day light to make the rooms feel darker, to bathe everything in hard shadows. Dormer is trapped in the sun but can escape his own dark guilt. It evocative, starkly setup to keep the audience in the dark with the protagonist.

The real masterstroke for me, though, was the shootout in the fog. This is a scene that really keeps everyone, Dormer and the audience, confused. Who is that in the mist? Are they good or bad? The inevitability of Dormer shooting Eckhart is made worse because it really is hard to see who he was aiming at. He says he isn't sure if he did it on purpose and maybe that's true. But considering he had to know the general size and shape of his partner, maybe not. The fog stands for the murkiness of Dormer's own soul, and Nolan makes it feel so oppressive and thick. This scene works so well.

After Insomnia Nolan would next film Batman Begins, another film with its own confused sequence in fog, as well as a troubled protagonist at the center of it all. It's easy to see Insomnia as Nolan's audition for the career to come, and frankly you can see why Warner Bros. was so interested in working with him again. While this film wasn't a smash success, making only $113.8 8Mil against a $46 Mil budget, it did show the skill that Nolan could bring to his work. Insomnia is a brilliantly calculated movie that never lets us, an oppressive film just as dark and murky as the character at the center of it all, and Nolan directs it all with aplomb.