It's a Puzzle Waiting to be Solved

The Hellraiser series is not one that I would classify among the top horror franchises. That's not to say it lacks big ideas, as it does. And it certainly takes some hard, gory swings, which I appreciate. No, the simple fact is that the series has never had the same cultural cachet as other horror film series. It's a gory series of demonic haunts, wrapped up in Slasher aesthetics, but despite going 11 movies strong (so far), only four of those ever made it to theaters, and the films series has been stuck in bargain basement direct-to-video Hell (pun intended) ever since. 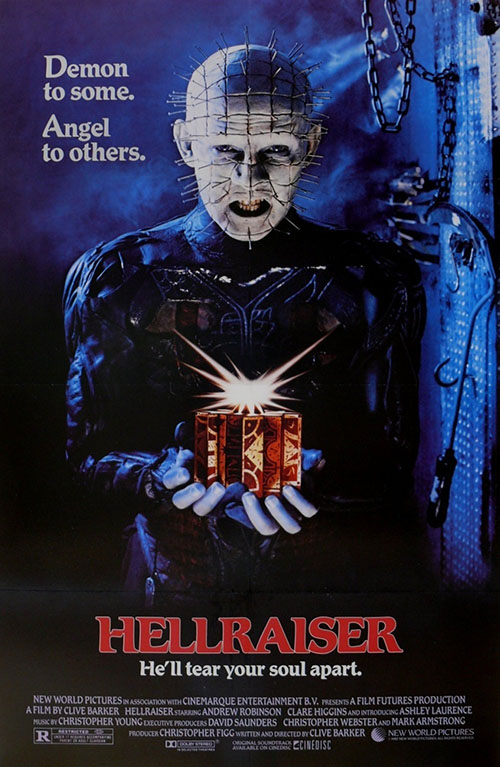 What happened to send the film series down this path? Well, you can see the first brewings of that slide into irrelevance all the way back in the first film. This was the most successful film in the series, grabbing $14.6 Mil at the Box Office from a $1 Mil budget, which is quite the nice return on investment. It has scares, it had tension, and it had really big ideas. But what the film also has is a seriously goofy streak running throughout it that betrays some of its power. There is no doubt that Clive Barker (writer of the original story, "The Hellbound Heart", who also wrote the screenplay and directed the film) had a vision, but that vision didn't quite translate to the screen by the time the third act finished rolling. And, once you get through the whole series, you realize the films are really never able to get over their goofier tendencies.

The film focuses on the Cotton family: father Larry (Andrew Robinson of eventual Deep Space Nine fame), daughter Kristy (Ashley Laurence), and wife and step-mother Julia (Clare Higgins). Larry's brother, Frank (Sean Chapman), had lived in their family home for years, doing God knows what (you can bet it involves a puzzle box) before disappearing mysteriously (spoiler: Cenobites were involved). Larry inherits the house and, upon seeing it's still in decent shape, moves his family in to get away from the troubles of big city life.

However, when an accident wounds Larry, causing him to dribble blood in an attic room, that blood ends up summoning Frank back from the pit of Hell he was throw into. Slowly piecing himself together (quite literally), Frank manages to suck Julia (who, as we learn, had a past romantic encounter with the other brother) into his plans. She starts dragging men to the house so they can be killed, and bled dry, in the attic, letting Frank regrow his body to become the man he once was. But through it all Frank worries because if the Cenobites ever find out he's escaped Hell they'll come back for him. So long as no one figures out what's going on (like, say, Kristy), Frank just might get away with it too.

The original Hellraiser is a film all about ambiance. it's less "final girl fights monsters" and more "evil guys slowly resurrects himself and corrupts a family from within". There is plenty of gore (and additional disgusting fluids), giving this film a very splatter-tastic vibe, but this first film really doesn't go in on the Slasher style quite as much as later entries will. This does make for a different kind of horror film than you might normally be used to, for sure, especially with the standard fare American studios tend to run. 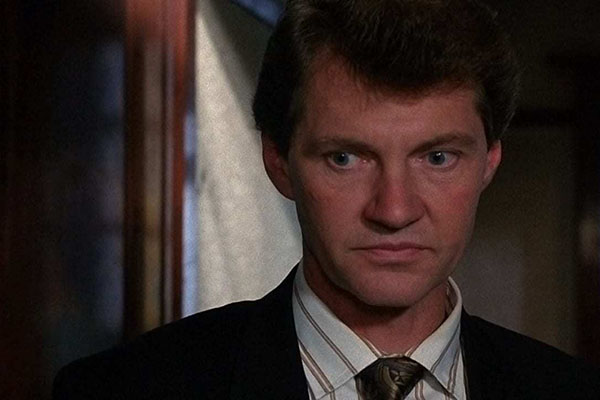 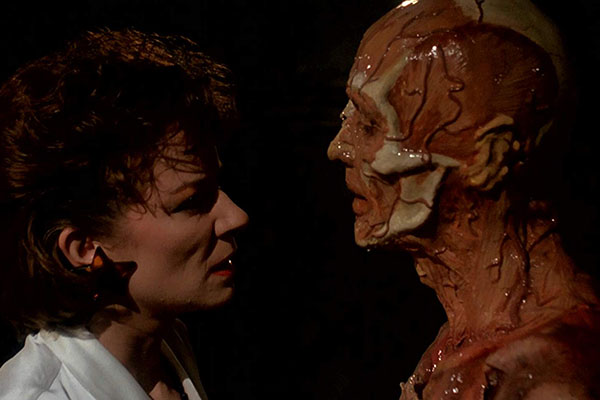 The film finds its best tone, certainly, in its first two acts. Barker is able to build a solid sense of dread over the proceedings, letting everything slow burn as more and more evil is perpetrated. The early going, with Larry getting injured and accidentally resurrecting his evil brother, lets the tension and terror build. We get fleeting glimpses of the Cenobites in these early acts, keeping the real monsters out of sight such that we know they're going to show up but we anticipate their arrival. The first two acts do a solid job of building the suspense up.

The film does a pretty good job fleshing out (pun intended) our villains as well. Frank might seem a little generic, just another guy looking for pain, pleasure, and power (you know, as you do), but he gets plenty of screen time to build his character out. Julia, meanwhile, received a number of extended flashbacks, letting us see her trysts with Frank so we get a vibe of what attracts her to him and why she'd be willing to kill to revive him. I wouldn't say either of these characters are deep but they do get enough story to feel like real people.

The same can't be said about Kristy. By the third act Kristy becomes our Final Girl (as she's one of the only characters left to fight Frank and the hounds of Hell), but Kristy was never really a focus of the film up to that point. Bringing her in and making her into our sudden protagonists doesn't really work in the confines of the film. We needed more time focusing on her, building her out as a character. She's a glorified extra for two acts of the film suddenly pushed into the role of the lead, and while Laurence is a solid actress up to the task, the character betrays her.

Also betrayed by the film are the Cenobites themselves. There's a running gag with the franchise that the Cenobites are great looking monsters that don't actually do anything, and this film absolutely starts that trend. The designs of the Cenobites are iconic, from the soon to be named Pinhead to Chatterer, but they don't actually do anything. They wear a lot of leather and have some pretty gnarly piercings, they stand around and talk about the delights of the underworld, and then they most just pace and look pallid. If they smoked clove cigarettes they'd be the Goth kids at a club drinking two-for-one Lament Configurations during happy hour. 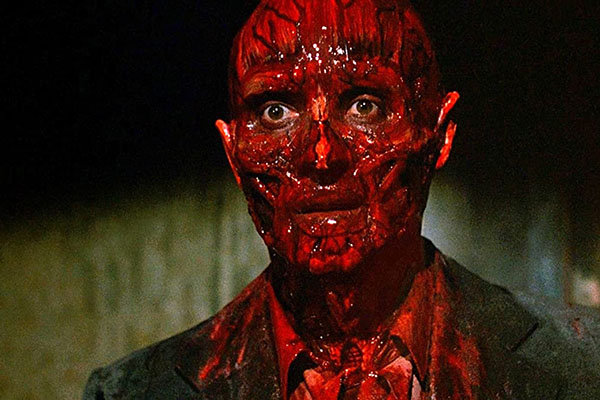 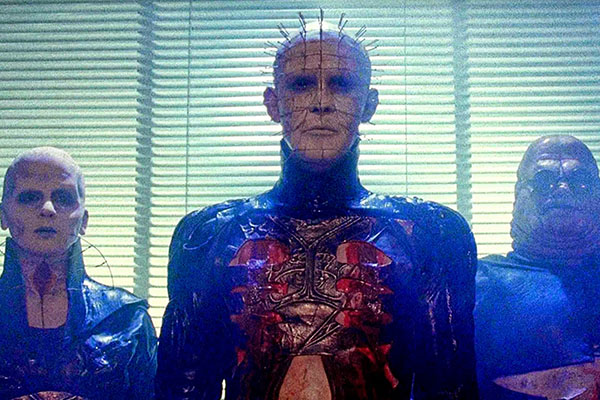 The film really struggles to come up with anything interesting to do once the third act rolls around. Kristy shows up, is taunted by Frank, then is taunted by the Cenobites, all before one of the goofiest and silliest climaxes I've ever seen in a horror film plays out. Generally I love practical effects as there's something tactile about them that CGI lacks. This film has some pretty good practical effects in the early going but the late game totally drops the ball. The Cenobites look silly while drawn-on-screen effects totally suck you out of the film. Back in the day they might have seemed creepy and cool but they certainly haven't aged well at all.

And, frankly, the whole story is betrayed by a lack of definition for the Cenobites. Is their motivation just to drag people to Hell or are they specifically targeting bad people who deserve their punishment. The film seems to waver on that idea, making Frank a target of the Cenobites because he asked for it (and deserved what they provided). When they go after Kristy, though, it feels less like she deserves to be dragged to Hell (because she doesn't) and more like Barker couldn't think of anything cool to do with the story so he went in on a generic monster finale. It totally undercuts the ideas raised in the film and makes the monsters feel cheap and uninteresting.

I didn't hate Hellraiser, not even close, but it does feel like there's two-thirds of a good film he that falls apart at the end. Certainly I've seen plenty of horror films that take that same trajectory in their own stories so seeing it happen with Hellraiser isn't shocking. End of the day, though, the lack of a good last act does rob this film of much of its power. It's not a film I'd actively want to re-watch again simply because, for all its interesting (and disgusting) ideas, it just couldn't stick the landing.