With the release of the third film in the new 2018 reboot series of HalloweenThe franchise that both set the standard for Slasher horror and, at the same time, defied every convention it created, Halloween has seen multiple time lines and reboots in its history, but one thing has remained: Michael Myers, the Shape that stalks Haddonfield. films, which supposedly will be the end of the series but we all know really won't be, it's seems like the perfect time... to ignore the new film and instead look at an old bit of Halloween media instead. I'm sure everyone absolutely must know what it's like to play an old Atari game based on the franchise. These are the cutting-edge reviews you all come for. 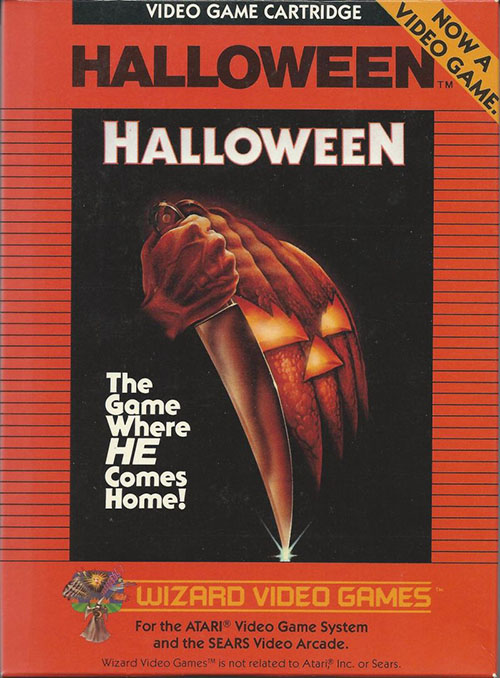 Released back in 1983, developed by MicroGraphicImage and published by Wizard Video, a Halloween video game isn't necessarily the dumbest thing ever produced. Sure, when the NES came out it was sold in toy stores and marketed towards kids as an "edutainment computer" and not just a video game machine. That had to be done, though, because of how poorly Atari (and its ilk) had crashed the video game market and salted the ground in the process. Video games consoles weren't exactly cheap, even at the low end (for 1980s money), and they started life as entertainment adults could get in on. A horror game that catered to that audience wasn't a bad idea.

Hell, there were other horror games on the Atari (for a certain definition of "horror"). Haunted House came out a year earlier, in 1982, and is still held up today as one of the earliest examples of the survival horror genre. There was a market out there for scary games, and not just media for kids, and Halloween looked to tap into that. Sure, this was just a cheap knock-off licensed title for the over saturated Atari 2600, but when you could bang out a game in a week and put it on shelves, why not make one for a popular Slasher series?

Considering the quality of games on the Atari 2600, you do have to temper your expectations when going into the 1983 Halloween game. Games of this era very often were built around one or two simple mechanics, with basic graphics and endless play-modes, and this horror title is no different. It feels like a very basic game, trumped in just a few years by Slasher releases on the NES such as Friday the 13th. Within the bounds of the games released during its era, though, Halloween isn't bad. Not great, but not bad.

The setup is pretty simple. You star as a babysitter (presumably Laurie Strode, although you're too pixelated to really be able to tell), stuck in a big house as Michael Myers comes after you. Scattered around the house are children (since you're a babysitter they do come with the territory). Your job is to walk the rooms of the house, avoiding Michael, while finding the kids and dragging them to the safe rooms at the far ends of the house. Save a kid, get a bunch of points, and then you can venture out into the house to find more.

While you're wandering you might also find a knife. This is the only thing you can use to fight back against Michael as he roams from room to room, constantly stalking you. Find a knife and you can pick it up, holding it front of you as Michael lurches forward. You can then stab him (which automatically happens when he gets close), causing the killer to run off, leaving you safe in that room (and also awarding you a bunch of points). Then you have to wander around again looking for wherever the knife spawned next.

And, well, that's really about it. The game doesn't have an ending, but then most Atari games didn't feature endings either. It's all about playing for score while trying to avoid Michael. Once you've played the game for five minutes you've basically seen all that you can of the game. Sure, the killer will get faster the more kids you save, and the game does lay on the difficulty that way, but if you know what you're doing you can play the game all the way to 999,999 points whereupon the next point scored loops the scoreboard back to 0 and you can just keep going.

As tedious as that sounds (and it does get pretty tedious after a long spell of the game), there is a simple pleasure to the Atari Halloween. When you step into a room and then Michael shows up, appearing from the other side of the screen (or even behind you) it does cause a little bit of a chill. It's a scary moment, especially as you realize you have to try and dodge around the killer to get to the next room. There's tension to be found there and the fact that the game is able to make that bit of a scare with the ancient hardware is impressive.

I will say that I didn't get bored quite as quickly with this game as some ancient titles I've played for this site. It compares more favorably, for example, to snow-speeder fighting of the The Empire Strikes Back 2600 title. It's certainly far more interesting and enjoyable than the awful Jedi Arena game from the same year. And when you look at titles like Ewoks and the Dandelion Warriors from four year later, woof, this game is far better.

In short, for when it came out, Halloween isn't bad. It's a playable, amusing diversion that does provide some fun little mechanics to keep players engaged for a little while. I doubt most will play the game until they loop their scoreboard (that takes easily over an hour and I only played this game for ten minutes), but for a little while, just to see what this game had to offer, there's some charm to the title. If you'd bought it back in the day for thirty bucks or so maybe you would have been disappointed -- this is no Pitfall or Berzerk -- but now, with hindsight and the cheap value of older games, this is a pretty solid little adventure.