When you're watching any legacy sequel the key question that has to be answered is, "does this add anything to the series?" Sure, any sequel needs to do something, but more often than not all they have to do is provide a bit of the same. You don't expect back to back sequels to be super creative, but the longer you go between entries the more those sequels have to justify their own existence. Legacy sequels, made long after a property has gone dormant, have to really prove why they exist. 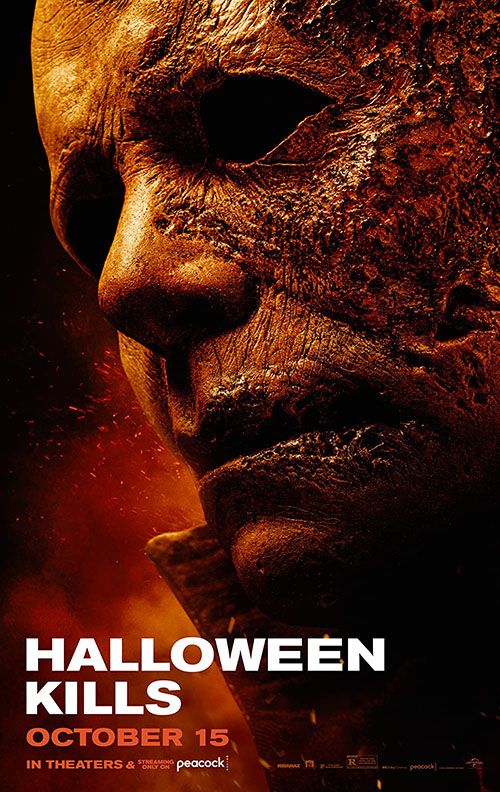 While I hate the Rob Zombie Halloween and Halloween II, the fact that Zombie approached those movies as an exploration of Michael's back story at least showed some new angle to the series. Those movies are awful, brutal and violent torture sprees, but they tried something. I can't really say the same thing for 2018's Halloween. The big idea it had was, "what if Jamie Lee Curtis's Laurie Strode was still alive", an idea that had already been explored in a previous reboot, Halloween H20. Outside of that already tried idea, Halloween '18 had nothing but tired kill streaks and more of the same. It failed to justify its own existence.

The one thing I will say about Halloween '18 is that at least it had a plot. It might not have been fresh or new or interesting, and it's kills might have been beyond lackluster, but it tried to tell a story about PTSD and recovery (well, and revenge). Picking up immediately after that film, on the same Halloween night in 2018, Halloween Kills doesn't even have that story going for it. It's just an extension of the same night without any real new story to add. Michael is still out there, he's still killing... hurray? That is not how you do a legacy sequel at all.

Before getting back to Halloween night, 2018, we first have to cut over to Halloween night, 1978 where we witness the aftermath of the original Halloween. Instead of Michael going to a hospital to rampage around Laurie (as in the original sequel, Halloween II, which is now no longer in continuity), we witness Michael him have a fateful confrontation with some deputies at the old Myers's house before his capture. We then go back to 2018 in the aftermath of the carnage, Michael trapped in Laurie's compound as the house burns down. While Laurie (Curtis) is rushed to the hospital (due to the wounds she got in the previous film), aided by her daughter Karen (Judy Greer) and granddaughter Allyson (Andi Matichak), fire fighters rushed to the scene to put out the blaze. Naturally, Michael used the fire fighters to escape killing them all.

Freed, Michael set about killing everyone that crossed his path once more. While he moved on the town, seemingly on a path to head back to his old home, some of his past survivors -- Anthony Michael Hall as Tommy Doyle, Robert Longstreet as Lonnie Elam, Kyle Richards as Lindsey Wallace, and Nancy Stephens as Marion Chambers -- gathered together to remember their attacks years ago. When they hear that Michael is out there, and alive, they gather the town to set about finding Michael and killing him, the mob mentality taking over. Can Michael be stopped, justly, without an unruly mob having to tear him to bits? 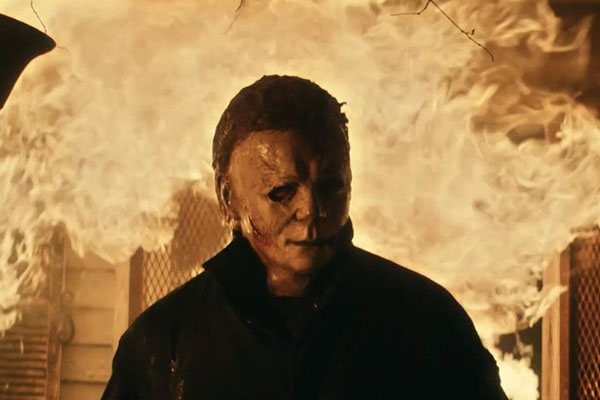 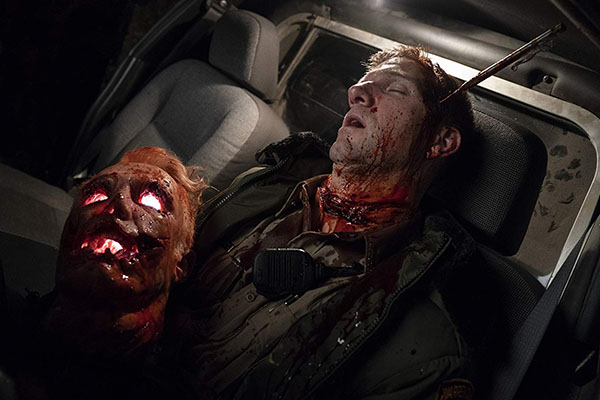 The story of Halloween Kills then, such as it is, is "mob goes after Michael to kill him." Not only is that not much of a story, largely because there's no real character arc there, it's also a story we've already seen before. The plot of Halloween 4: The Return of Michael Myers, had a long B-plot about the townspeople of Haddonfield learning Michael was back and putting together a mob to chase him down. While the details, moment to moment, are different, the overall feel of the story is one that we've already seen.

The movie also brings back Tommy Doyle, a legacy character from all the way back in the first movie. This would have been interesting if, again, the films hadn't already done that over in Halloween: Curse of Michael Myers. Now, sure, that movie was bad enough that every sequel since has rebooted it away, but that doesn't change what we've seen. Did you want a reference to Halloween III: Season of the Witch while we're at it? Well, you get one anyway in the form of the Silver Shamrock masks appearing here again. So much of this sequel seems dedicated to revisiting ideas from all the old movies that were rebooted away but it direct predecessor, which stands in direct contrast to the reason for that reboot.

Considering all of that, what do we actually get from this movie? Not much. As I said, there really isn't much plot to speak of. None of the main characters in the film grow in any way, shape, or form, existing basically where they were at the start of the film by the time the film wraps. Think Tommy is going to learn a lesson after he incites a mob? He doesn't, he just leads the mob to their death (his death included). Meanwhile, Laurie and her family basically sit around the hospital for a while until they take one trip out and immediately get attacked by Michael. What was the point of that?

Without a story, Halloween Kills is simply a conveyor belt of kills and death and, sadly, none of those kills really work. The big issue is that there are just so many kills; I stopped keeping track of kills for these Slasher movie articles a while ago, but a rough estimate of what I remember in the movie is easily 20+ kills, a high water mark not only for this series but the genre in general. More kills in a Slasher, though, does not equal more fun as you have less time to learn about any individual character and appreciate who they are before they die. Their deaths should have meaning, but none of the deaths in Halloween Kills actually matter. They're just gore for the sake of gore. 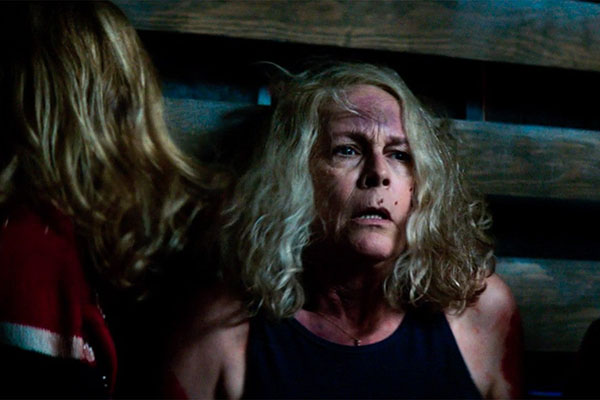 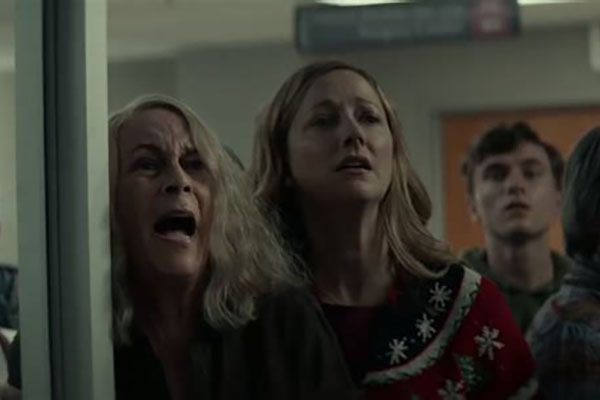 Well, okay, two deaths actually have impact and that's because, in this one instance, the film actually invests in character. We're introduced at one point to Big John (Scott MacArthur) and Little John (Michael McDonald), a gay couple that live in the remodeled Myers house. We get to watch them over a series of scenes as they bicker and banter, chasing kids off their yard all Halloween night. By the time Michael shows up we've become attached to the Johns such that when the Shape kills them we actually feel sorry for the characters. That's what every death should mean in a Slasher film, but the film very rarely does that kind of character work. It prioritizes quantity over quality, to the film's detriment.

Worse, though, is that even the artistic flourishes the first film had, the small moments that made the film feel more artful, are missing there. The first film had a neat tracking shot as we watched Michael slowly work his way around a house before killing the owner. That sequence had theatricality to it. Nothing in Kills matches that theatricality. It's just there to move the characters along from Point A to Point B as simply as possible, with point B being the third and film film in this preplanned trilogy.

It can be hard to make a middle movie in a trilogy that matters. It's hard to move a story forward in the middle section, especially when the end of a trilogy is already known and planned. Instead of doing real story work here, in any form, Halloween Kills simply kills time (pun intended) until the next film comes along. It's a table-setting film, and one that feels utterly unnecessary. Realistically this film doesn't need to exist, we could have gotten all the important story bits here packed into the start of the third film. That's the opposite of justifying its existence. If anything, Halloween Kills proves how little life there is left in this franchise.