Dour or Sultry, the Game is the Same

I was flipping through NetflixOriginally started as a disc-by-mail service, Netflix has grown to be one of the largest media companies in the world (and one of the most valued internet companies as well). With a constant slate of new internet streaming-based programming that updates all the time, Netflix has redefined what it means to watch TV and films (as well as how to do it). recently when I came across 2005's Constantine. For whatever reason Netflix had this in their "Popular Movies" category, despite it being a film from nearly 20 years ago and one that has made the rounds plenty of times before. It was an odd one to see promoted on Netflix, but then considered the caliber of most of their output recently, I guess a mid-grade DC ComicsOne of the two biggest comic publishing companies in the world (and, depending on what big events are going on, the number one company), DC Comics is the home of Superman, Batman, Wonder Woman, and just about every big superhero introduced in the 1930s and 1940s. film is a better option than their originals. 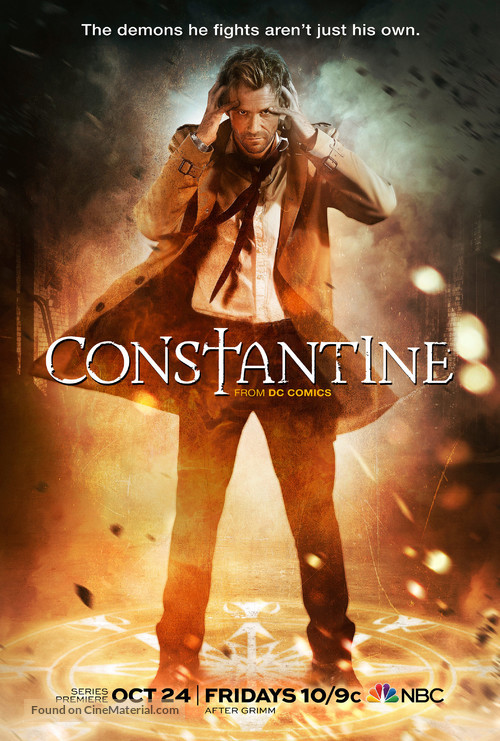 I watched it because, hey, it's a good movie. It didn't get a lot of love back in the day, but it has its own vibe that works. It's dark and gritty but it does illustrate a fun story about good and evil and a dude caught in the middle between them. It also gave Keanu Reeves a good performance, one unlike Neo over in The MatrixA speculative future story with superhero and anime influences, The Matrix not only pushed viewers to think about the nature of their own reality but also expanded what filmmakers could do with action sequences and filming. It then launched a series of movies, games, and comics, creating a franchise still talked about today.. Back when the film came out I had a hard time understanding why the comic book nerds were so upset. Sure, I reasoned, the character wasn't much like his comic book counterpart but was that really such a big deal.

Since that film came out, though, we have had a different portrayal come along. Matt Ryan was cast in the 2014 MBC TV series, also called Constantine, and while that series wasn't a smash hit (only getting a single season), Ryan's performance was hailed by everyone that watched it. That led to a crossover of sorts with his version of John ConstantineAlso known as the "Hellblazer", John Constantine is a detective and con-man who has skills with the dark arts and a penchant for taking on demons. showing up over on Arrow. Then Ryan's character became a regular in the ArrowverseWhen it was announced that the CW was creating a show based on the Green Arrow, people laughed. The CW? Really? Was it going to be teen-oriented like everything else on the network and be called "Arrow High"? And yet that one show, Arrow has spawned three spin-offs, various related shows and given DC a successful shared universe, the Arrowverse on TV and streaming. while a another version, also voiced by Ryan, become a recurring character in the DC Animated Movie UniverseWhile DC Comics was amping up production on this big "MCU-killer", the DC Extended Universe they were also quietly putting together another shared movie continuity, the DC Animated Movie Universe. This series was more closely related to the comics, directly adapting a number of famous storylines to, arguably, better effect than the live-action movies could.. Heck, he's even voiced the character over on the third season of Harley Quinn. Basically Matt Ryan is John Constantine now.

So why did Ryan's version of the character catch on while Reeve's version did not. Some of that is related to the Box Office. The Reeves film was only a modest hit, pulling in $230 Mil against a budget of upwards of $100 Mil. It made double, which in the fuzzy math of the studio system means it really only broke even at best. There wasn't the drive to make a sequel at the time, and the property (with Reeves in the lead) lay fallow. By comparison , even though Ryan's TV show wasn't a hit, the producers of related shows loved him for it and they were driven to keep his version alive. The impetus was there for Ryan's character in a way that didn't make sense a decade earlier when Keanu had the role.

Beyond that, though, there was the fact that the true fans of the character hated Reeve's version. It's no knock against Keanu, mind you; he plays a version of the character that works for Keanu, and it is fun in its own way. But the dark haired, surly, American version is very far removed from the blond guy with swagger that is the comic book version of the Hellblazer. I'm not saying that Keanu should have put on a British accent -- anyone that's seen Much Ado About Nothing from 1993 or Dracula from 1992 knows that would be a bad idea -- just that the studio made a version of the character that tossed away all the things that made John Constantine John Constantine. 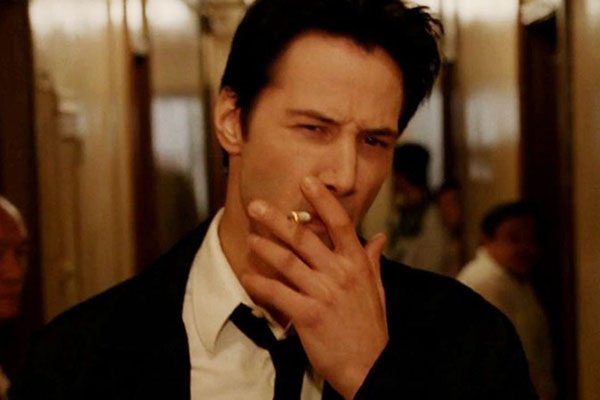 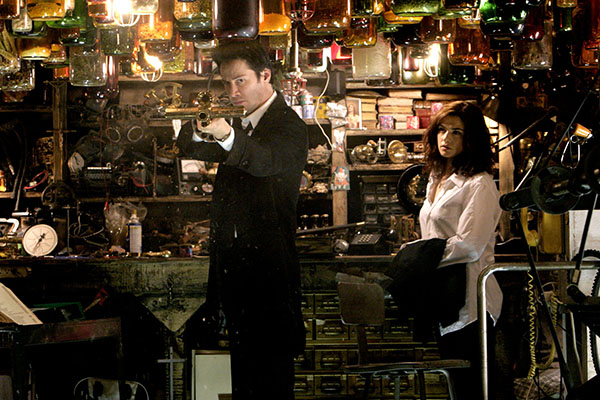 Credit where it's due, the studio did at least like Constantine smoke in the film, a habit that defines the character. However, in the movie he's a surly dude with no charisma who hates everyone, doesn't have sex at all, and listens to jazz. All of these details are wrong. This character could have been anyone with those personality traits but he's certainly not a proper rendition of John Constantine. It's like taking BatmanOne of the longest running, consistently in-print superheroes ever (matched only by Superman and Wonder Woman), Batman has been a force in entertainment for nearly as long as there's been an entertainment industry. It only makes sense, then that he is also the most regularly adapted, and consistently successful, superhero to grace the Silver Screen., dressing him pastels, giving him a gun, and sending him off to teach "Moving Forward Past Grief" out in broad daylight but still calling him "Batman". It just doesn't work when you know the character.

Compare that to Matt Ryan's version. Ryan, a Welsh-born actor, can handle the accent properly. He has swagger, with charisma dripping off him without him even trying. He can get dark and surly, sure, but you can tell in Ryan's portrayal its a coping mechanism and not just the way his is all the time. Plus he absolutely oozes sex, giving it off in waves as everyone, guy and girl, falls head over heels for him (before he drags them off to his bedroom). He acts the part, he looks the part, he is John Constantine in every way that actually matters.

Some of he other qualms that reviewers had at the time are less interesting, mind you. They groused about the 2005 film's L.A. setting, saying "Constantine is inextricably tied to London. It's his city." But then the TV show was also set in L.A., and most of the programs he's been on since have barely paid attention to where he lives or why (mostly giving him a House of Mystery that can move around at will). Maybe complaining that the versions of Lucifer and the other angels and demons in the movie could hold weight (especially with Tom Ellis's Lucifer out there), but complaining about setting was silly.

Still, once you've seeing Matt Ryan in the role it's hard to go back to Keanu Reeves and actually think he's the right version of the character. It's like a weird, distorted mirror universe. Someone is going around, doing the work that Constantine does, fight demons, casts spells, and even has John's name, but he's just not John. He's not a rock star, he's a surly dude hiding away, waiting for the demons to come. That's a workable character for a movie about the battle between God and the Devil, but it's not Constantine. 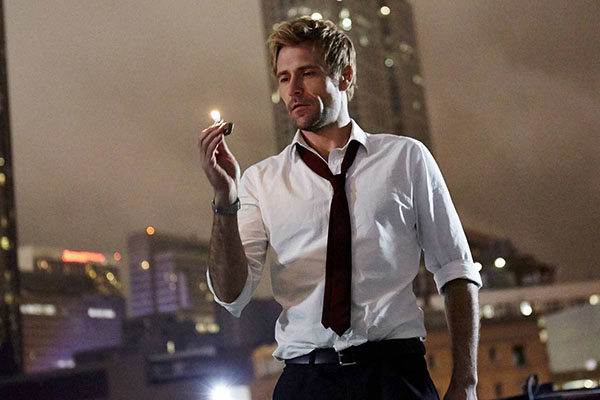 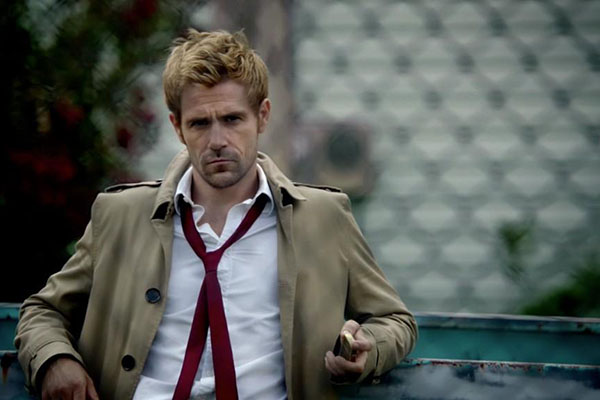 Mind you, I still watched it all the way through because, as weird as this movie is when you have a better version of the character, it works on its own merits. I enjoy the movie for all the good things it does, I just have to divorce myself from the idea that this is John Constantine, Hellblazer. It's not. It's a dude named "John" and he's good at killing demons dead. Once you get over that, and just settle into the film, you get two hours of pretty solid, demon-fighting action, which is a perfectly serviceable way to waste an evening.

If they do another live-action Constantine film they need to bring Matt Ryan in for the role. He's perfect as John and it seems like (with all the times they've cast him in the role) even DC knows this. I've even seen people Online saying John Constantine should be the central figure of the DC Extended UniverseStarted as DC Comics' answer to the MCU, the early films in the franchise stumbled out of the gates, often mired in grim-dark storytelling and the rushed need to get this franchise started. Eventually, though, the films began to even out, becoming better as they went along. Still, this franchise has a long way to go before it's true completion for Marvel's universe.. Not Batman or SupermanThe first big superhero from DC Comics, Superman has survived any number of pretenders to the throne, besting not only other comic titans but even Wolrd War II to remain one of only three comics to continue publishing since the 1940s. or The FlashStruck by lightning while working in his lab, Barry Allen became a speedster known as The Flash, launching an entire set of super-fast superheroes. but Matt Ryan's Constantine. He's already basically filling that role, showing up everywhere and doing his time. It's about time that DC solidified that and made it official. That is a DCEU I would watch.