On a Religious Crusade

For a time there Kevin SmithConsidering where he came from, working as a clerk in a convenience store, it's pretty impressive that (for at least a little while) Kevin Smith became a defining cinematic voice of a generation. could have been viewed as the voice of a generation. He found a way to speak for all the kids working retail jobs, stuck in the grind of crap pay, while finding ways to entertain themselves (and each other) as an endless procession of days, and customers, wound on. He tapped into that with two very funny movies -- Clerks and Mallrats -- before trying to tackle a more serious subject (love and loss) with his third film, Chasing Amy. For all the issues that the film has now, in a more evolved political climate, Chasing Amy showed at the time that Smith could do more than slacker retail humor. He could do that, but with pathos too. 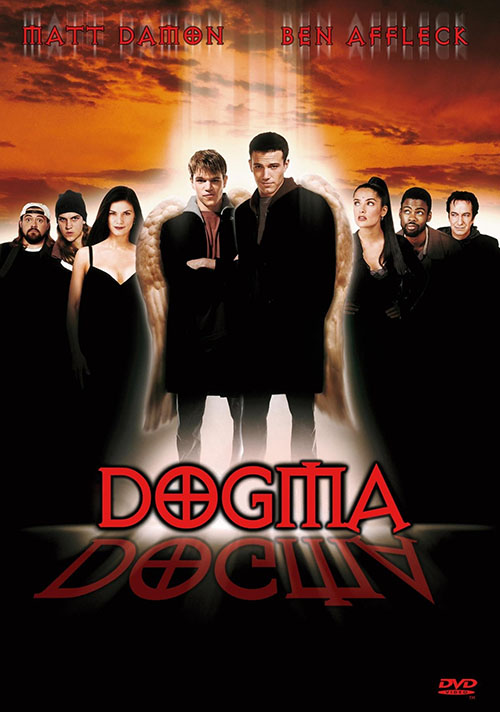 Chasing Amy helped show that Kevin Smith could, when it really dug deep, be a serious director. Hopes were then high, from all quadrants, for his next film, and three years later he came out with the fourth of his "New Jersey Trilogy" pictures, Dogma. Like Chasing Amy, Dogma was a personal subject for him, letting him work through his own thoughts and opinions on religion. But it was also much more in line with his previous films, also filled with slacker humor and pop-culture references. It was a marriage of his ideas that proved to be pretty successful (for a Smith film) at the Box Office, pulling in $44 Mil off a $10 Mil budget. It's a film that does still work, decently well even now, although as far as his career to come, Dogma would prove to be a harbinger of Smith's worst impulses.

The film focuses on Bethany Sloane (Linda Fiorentino, an actress so hard to work with that, unlike everyone else Smith had ever worked with, was never asked back to another of his pictures). Despite being very Catholic Bethany works as a doctor at an abortion clinic in Sherman, IL. One night she has a dream about an angel, Metatron (Alan Rickman), who tells Bethany that she's going to have to go on a journey to stop two angels from entering a church (for reasons). She'll be aided by "two prophets"... in a manner of speaking. The next night at the clinic she's attacked by an anti-abortion activist. Thankfully she's saved by two idiots, Jay (Jason Mews) and Silent Bob (Kevin Smith), who were out in Illinois to try and make a little "profit". Suddenly Bethany realizes these are her prophets and she has to go with them.

What follows then is a road trip to get from Illinois to New Jersey. They're racing against time as the two angels, Bartleby (Ben Affleck) and Loki (Matt Damon), take their own trip to get to that church. The church in question is being rededicated and it seems that anyone that enters the church on that day with have all their sins wiped away. Bartleby and Loki were on Earth because they'd gotten drunk in Heaven and did some dumb shit, getting expelled to Earth. If their sins are wiped away it'll prove something about fallibility of God and the world would end. How to stop the angels, and what will happen at the church when they get there, well, that's for Bethany and her "prophets" to find out.

Dogma is the first road trip movie in Smith oeuvre, but it wouldn't be his last. Taken on its own the film works pretty well. It's got Smith's usual style to it -- crass, crude, but very funny -- and it does have a solid viewpoint about its handling of religion. I think the reason it doesn't hold up as well for me as it used to is because this is ground that Smith would tread again and again. He's go back to the road trip format for his next film, Jay and Silent Bob Strike Back, and then again years later for Jay and Silent Bob Reboot. It's well-worn territory at this point, and each time it feels a little less fresh. It was fine in Dogma but, retroactively, it got worn out. 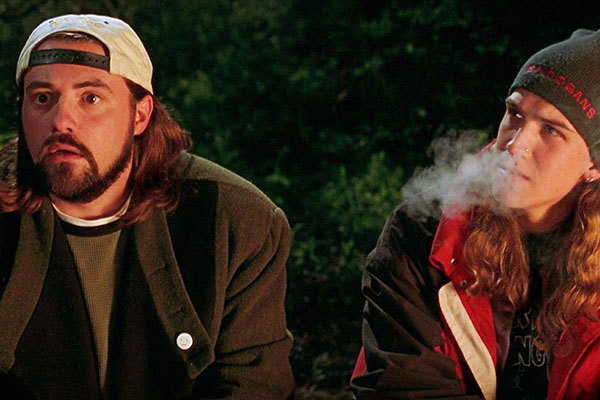 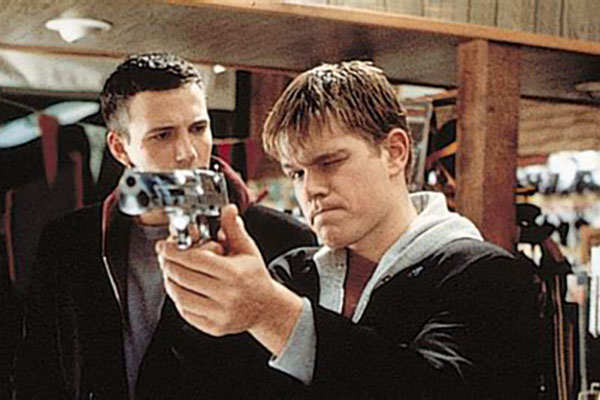 Long as you don't worry too much about the films to come, though, there is a lot to like in the movie. His views on religion, or spirituality, or whatever you want to call it are decent. It's not ground-breaking to say, "hey, everyone has some good ideas so maybe we shouldn't be so stuck in stone about our beliefs," but it is a message that some people probably need to hear. I don't know how many people that sit for a Kevin Smith movie, with all its dirty humor, would need to hear that message, which does mean Smith was probably preaching to the choir here. Still, it is a nice message to hear.

Meanwhile, the film does have a lot of pretty funny moments within it. Sequences like Bartleby and Loki at the Mooby's head office, or any time Rickman is on screen, those are some of the funniest bits of the film. I can certainly get behind the parts of the film just following these characters around. Oh, and the reveal of he Buddy Christ stands as one of the dumbest, funniest things in Smith's films. There are moments of pure hilarity in Dogma.

That being said, not everything works for me I'm not a huge fan of Chris Rock in general as I find his delivery (both as a comedian and as an actor) to be a tad shrill, and Rock gives that same performance here. His material as the 13th Apostle, Rufus, is funny but I really don't like Rock's handling of the character. By an even greater measure, Jay and Silent Bob get really tiresome in this film. They somehow went from side characters in the first three "New Jersey" films to leads in this one, but the more time they're given the more you realize there's nothing to these guys. Mewes and Smith are game enough but these are the two most underwritten characters in the film.

Smith also can't help himself with some truly cartoony touches in this film. A sequence in a strip club, where the characters end up meeting one of the Muses, Salma Hayek's Serendipity, is just cringing and cloying, that then gets capped with a literal shit monster who is defeated by a pun. It's bad. This is followed by a later sequence with the guys, a demon, and a golf club that also fails to play for me. The best humor Smith could have is followed by some tired material that should have been edited out (and wasn't). 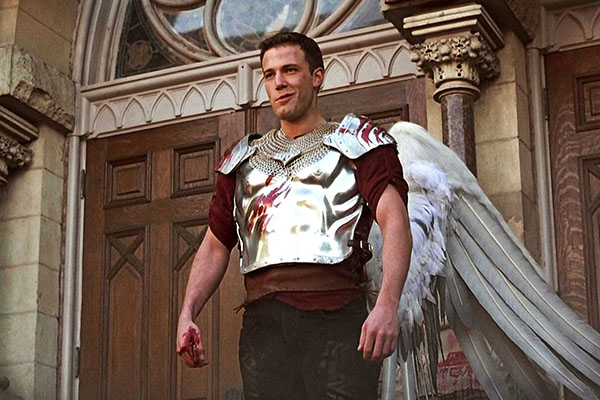 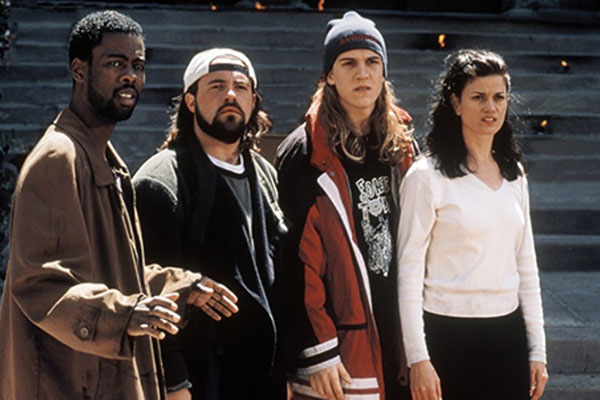 Speaking of cringing material, Smith moderate message of, essentially, "hey, let's all get along" also leads to a pretty meh ending for the film. Everyone ends up happy, getting what they want with the Earth is saved. But when our lead character, Bethany, actually gets to talk to God, nothing comes of it. It all ends with a honk on the nose and then God goes off to do a headstand. I dunno what Smith was really trying to say (the movie is all, "God is funny that way") but it feels like a real cop out (even before he directed Cop Out). I wanted just a bit more from this movie.

I get that Smith had a message he wanted to write about. On a personal level for him this film likely helped him write out his thoughts and work through things that bothered him. Good for him. Long term, though, it makes for a weaker entry in his filmography. It's still watchable but it just doesn't quite have the right mix of either funny or serious content to really hold up. It's watchable, in passing, but for a film I'll go back to again and again, I'd rather go watch Mallrats.