Every writer and director has at least one deeply person story within then. Whatever the subject matter that they normally work with might be, I'm absolutely positive there's some story the artist absolutely wants to make. They might not always be "the Great American Story", a subject not only personal but, somehow, aspirational (hell, sometimes the artist simply wants to remake a story from their youth to give it a new spin), but every artist out there has some story they absolutely want to tell. Occasionally, too, it's a story they have to tell for very deep and personal reasons. 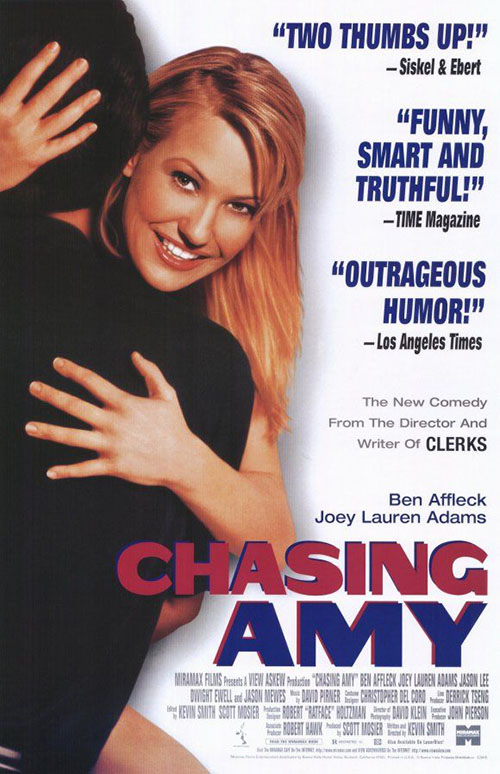 Although it seemed weird at the time to think that Kevin Smith, the Clerks and Mallrats guy, had a deep and personal story to tell. This was the dude that got famous telling stories about the personal lives of retail workers while making pop-culture references and dick and fart jokes. And while his third film, the very personal Chasing Amy, is still absolutely filled with crass humor, it also tells a very strong and dramatic story, one that meant a lot to Kevin Smith. It helped him work through a break up and move on with his life at the time.

What Chasing Amy proved at the time was that Kevin Smith had more interesting stories to tell. Given the right motivation the writer / director could actually crank out stories that "meant something". Oddly for me, though, over the years I've found myself less and less interested in this film, of all of Smith's early works. The love story feels like it actually runs counter to its own arguments, saying things about it's lead female character and the story she's going through that I don't think the story meant. Beyond that, the film's more dour ending and clumsy writing keeps it from being one of Smith's best. It was a personal story for him but that doesn't necessarily make it interesting to watch twenty-plus years later.

In the film we have Holden McNeil (frequent Smith collaborator Ben Affleck) and Banky Edwards (equally frequent collaborator Jason Lee). The two created a stoner riff on BatmanOne of the longest running, consistently in-print superheroes ever (matched only by Superman and Wonder Woman), Batman has been a force in entertainment for nearly as long as there's been an entertainment industry. It only makes sense, then that he is also the most regularly adapted, and consistently successful, superhero to grace the Silver Screen. (and his cohort, Robin), Bluntman and Chronic, that has gained some notoriety since its release. Something of local celebs on the comic market, Holden and Banky are the famous guys in their group, the successes that show that fame (and profit) can be found in the comic world. That's unlike their friends, such as Hooper (Dwight Ewell), a gay writer who has to pretend to be a militant Black Power radical in public just to get his book noticed.

Hanging out with Hooper, Holden meets Alyssa Jones (Joey Lauren Adams), a comic writer who has her own girl-meets-girl romance comic (which, again, isn't anywhere near as famous as Bluntman and Chronic). Holden instantly falls for Alyssa, but there's just one catch: Alyssa is gay. Or, at least, very gun shy around men so she leans towards lesbian relationships only. After embarrassing himself asking her out, Holden and Alyssa end up just hanging out as friends. Eventually, though, sparks fly between them and they fall into a relationship together. He's the first man she's been with in a long time, and while she's all in, Holden suddenly finds himself daunted by her sexual experience. His dilemma is if he can get out of his own way and be with a girl he's crazy about or if his personal hangups will drive her away. 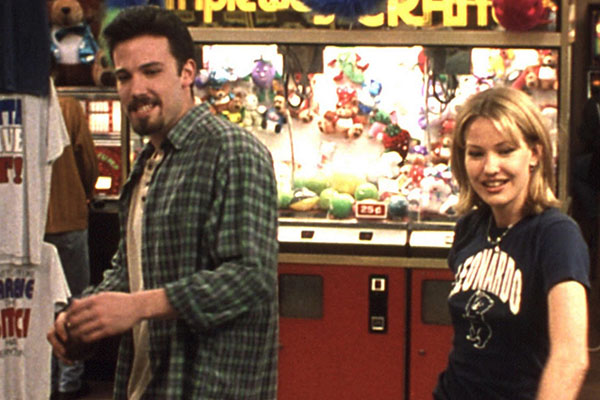 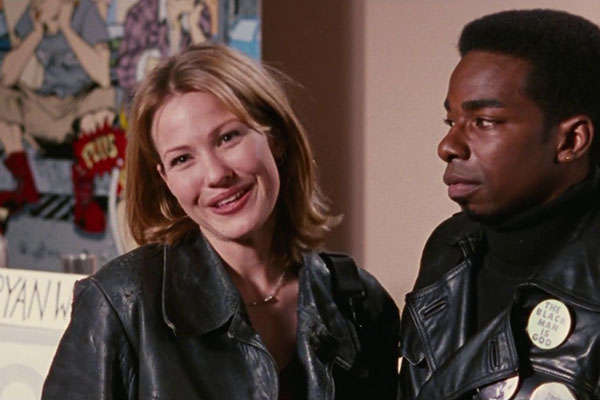 Smith has commented that this movie is personal to him because while the details in the story aren't what he went through, the broad strokes of his own personal hang-ups ended up driving away the girl he loved. You can see that thread in the movie and, viewed from that perspective, you can kind of understand what Smith is saying in the movie. he didn't get the girl and (spoilers for a twenty-plus year-old film) neither does Holden. That Smith kept that ending to her personal story is commendable. It feels realistic in that regard as not everyone gets to be together, especially when they do enough dumb actions in their relationships that they create a rift that can't be healed.

At the same time, while Smith clearly wanted to create a story that could appeal across the aisle, working in LGBTQ+ content (at a time when that was even less prevalent than it is now), the way he handles that content is pretty ham-fisted. Frankly, viewed from the distance of time (and with better LGBTQ+ stories out there), the central relationship in this film is actually kind of offensive. Alyssa starts the film mas an out-and-proud lesbian and she doesn't describe herself as bisexual. Despite the film trying to say that lesbians aren't just "one deep dicking" away from being straight, the message the film sends by having Alyssa fall for Holden (after they fall into bed) seems to argue the exact opposite point. Yes, when they break up she goes back to being exclusively with women, but that hardly justifies the actions.

There are ways the film could have handled it better, having Alyssa out not as gay by bisexual from the start. That, of course, would have changed the meaning of her change of heart, making it less shocking when she fell into bed with Holden (even if it was true to the character). The film was probably one rewrite away from giving Alyssa a better version of her story, handing her sexuality, and experiences, better without making, as more than one reviewer put it, a "straight conversion" story out of her life.

Plus, frankly, the film also slut-shames her for her past actions. What we see of her, with Holden, is a happily monogamous woman who wants nothing more than to be with the person she loves. In her past she had a lot of sex, with a lot of people, which she even admits was something she did and then put behind her. While the film has Holden act remorseful after he yells and screams and breaks up with Alyssa once he learns about her past, but he still breaks up with her all the same. She's shamed by what she did all over again, and this drives her away from him and back to her old life (and, well, safety in lesbianism, a story turn that also feels a little icky when you think about it). Again, it's a story personal to Smith but that doesn't make it's beats any better when you look at it in the cold light of day. 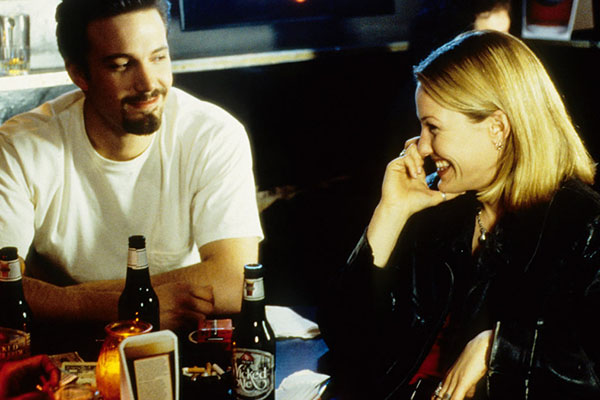 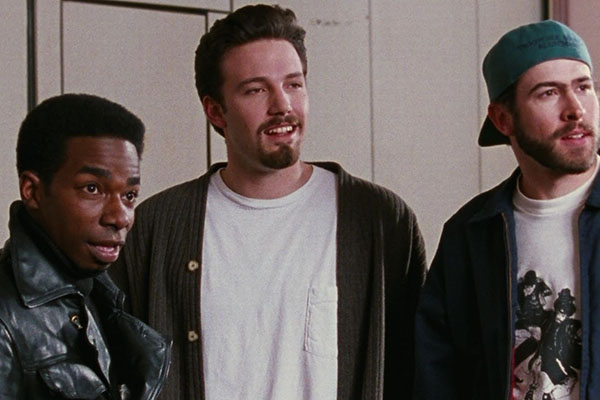 At the time the film came out it was lauded for its content and "fair representation". Yes, even reviewers at the time admitted it was a little awkward with its content, but there weren't a lot of stories like this out there. Now, however, there is more LGBTQ+ content that handles subject matter like this a whole hell of a lot better. What felt like a revelatory spark at the time seems quaint at best, offensive at worst with twenty years behind us. You can respect what Smith wanted to do without lauding the way he did it, and I think that's where we have to fall with Chasing Amy.

Weirdly, this film was also a tipping point for the director's career. After this he had two more personal stories within him, one dealing with religion (Dogma) and a latter one about his own time as a parent (Jersey Girl). Of the two, Dogma was the better received at the time. Neither, though, are nearly as quotable, or as interesting, as his earliest two films (Clerks and Mallrats). And as his career went on, his stories became far less personal, and less interesting to boot.