Back On the Field For Another Round

Technos sure did love putting out sports games in the Kunio-kunStarting as a fighting game befoe spinning out in sports titles (and other adventures) of all shapes and sizes, the Kunio-kun series is one of the most diverse, and hilarious, to ever grace both sides of the Pacific. series. Or, really, they really loved milking that franchise for all it was worth. Kunio-kun's Nekketsu Soccer League not only arks the second soccer title in the series on the NES but also the fifth sports game in the series as well (sixth if you also count the two-on-two competitive brawling game), and it would mark a run of four sports games back-to-back for the series split between the NES and SNES hardware. The question that has to be asked, though, is if we really needed this game? 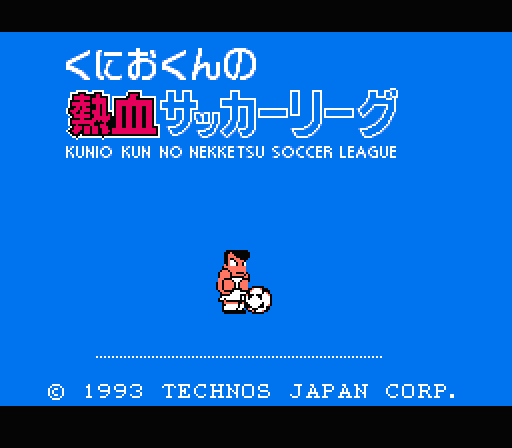 The sports games in the series have always been amusing larks with some (such as Crash 'n the Boys: Street Challenge) being ore entertaining than others. None of them have been incredibly deep, though. Those that succeeded did so because of the odd-ball nature of the proceedings and the fact that the idea hadn't really been done before in the Kunio-kun setting. A sequel to any of these games couldn't just get by on the surprise factor of the game -- "they put Kunio into a soccer game?" -- but would actually have to show real improvement. A sequel means it's become a legitimate franchise and not just something silly to pass the time.

On that front I don't really feel like Nekketsu Soccer League truly elevates itself above what came before. There's no doubt Technos put more into the game to try and improve it over the original soccer title (Nintendo World Cup), throwing in some of the general improvements made across the whole of the Kunio-kun series to add spice to this title. End of the day, though, if you'd played the original Nintendo World Cup it's hard to see how there's much here that really would draw you in to play a whole tournament of soccer again. Once you've played a round or two, in either game, you've seen most of what this title has to offer. It's soccer, so you really have to want a sequel to Nintendo World Cup to be invested in this soccer league.

On paper this game does provide a lot of new features to enhance the original Kunio-kun soccer experience. Naturally there's the base game play for the title, with your guys running around, kicking and bashing into your opponents, power smashing the ball across the field to try and get it into the goal. There do seem to be more power attacks, with more effects this time around, although most of them amount to the same basic effect: if one of your power-launches hits an opposing player it will send them flying. Do it to the goalie and you have a chance to send them careening out o the net while the ball settles in for a score.

Off the field the player gets a fair bit of control over their team. They can arrange their players, swap in and out team members to get optimum use. They can chat with their players, and give them items, all to try and improve their performance on the field. Whether it really has any effect or not is debatable -- I certainly didn't see much improvement from a player I talked to and gave items to -- so who knows if all that is really worth it. I'm sure a player that spent a lot of time getting deep into the sim aspects of the game (such as they are) might see some noticeable difference, but I did not in my time playing through a whole session of the game. 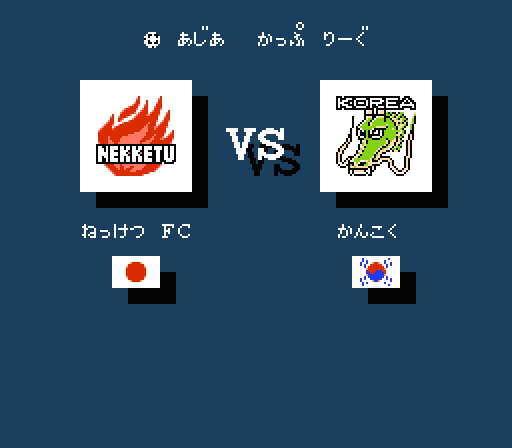 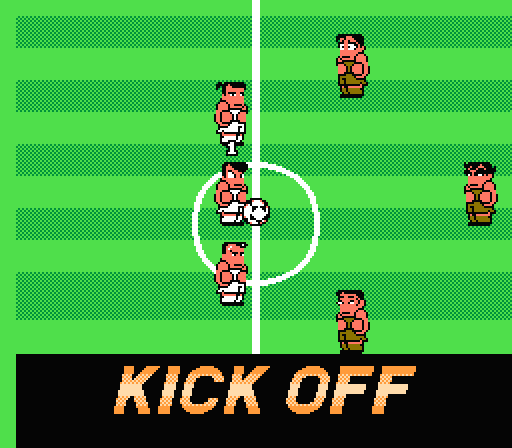 The meat of the game takes place within the "soccer league". Kunio and his team go from one region to another, playing three teams in each region (such as Asia having Korea, Thailand, and Japan). Clear all four regions and you can move onto the final tournament to play for the Technos Cup. It feels very similar to the basics of the previous soccer game, just with the ability to choose the order of teams you play against. It's not really a lot of choice (you have to take all of them out eventually) but I suppose it is something.

Basic play is exactly like you expect. The one twist here is that this version of the game includes weather effects. Games can be played in the sun, or the rain, along with some featuring high winds as well. Sun is the easiest to deal with as this will feel like a normal game of soccer. Rain will put puddles on the field, which on their own aren't bad, but if lightning strikes while a player stands in an affected puddle, they will get shocked. The ball, in that puddle, will also get a lightning bonus for a short time, potentially dealing damage to struck players. High wind makes the ball more floaty, traveling farther, while cyclones can appear, sucking up the balls, and players, and sending them flying. The weather effects do add a bit of variety to the game and were much appreciated. Their spicy made the game a bit more interesting.

One big difference I also noticed was that players don't seem to easily get knocked out of the game. In the Nintendo World Cup I could beat the snot out of players and, eventually, they'd just fall down, passed out for the rest of the half. Here, no matter how much abuse I dished out, players continued to get up. I suppose this was done to make the balance more "fair", but it also meant that my attacks really didn't seem to have as much impact as they did before. I liked destroying the other team, as you'd expect Kunio to do, all to get an advantage. It was great and sorely missed here.

And while we're complaining about things seemingly getting a downgrade, the game play in this sequel feels much slower. Players don't seem to move quite as fast, and passing and shooting is much slower. The game does run at a nice, breezy frame rate but the actual actions of the players makes them feel like they're trapped in mud. The game is just slower all around, having a pace that kept me from really getting into the game, which really sucked as you could end up playing for two-and-a-half hours to clear a whole league. I need faster game play to stay engaged for that long. 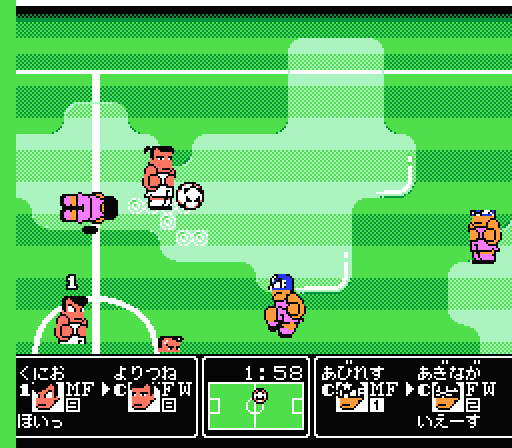 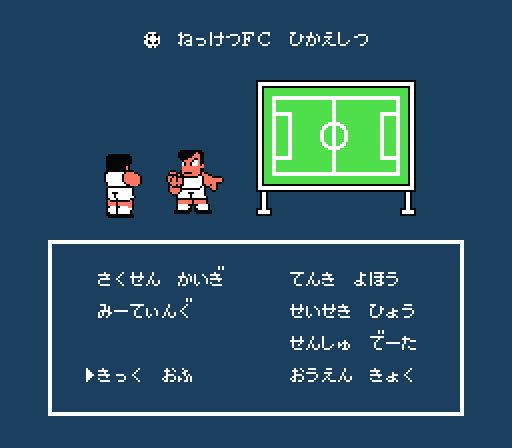 There is some fun to be had with this title, watching all the goofy things that can happen while you run up and down the field. And the game can be pretty fun if you play it two player, trash talking your friends and you run around with the ball. But all of that could have been said for the previous soccer game in the series, too, which really leaves this game feeling far less than relevant. For all the extra features added to this game, very little of it truly brings much more to the table. This feels like an incremental update to the Nintendo World Cup, more of the same with just slightly better presentation.

End of the day, it really does feel like a lazy cash grab. You can practically imagine the planning session for this game. "Let's take our previous soccer title and thrown in some of the random features of our other sports games. They all run on the same engine, we can just copy and paste stuff in." It was probably good to get a few quick bucks off players but it doesn't make for a solid sequel. I suppose if you really liked soccer, and hadn't played the Nintendo World Cup then this game would feel pretty fun. For everyone else, there are better Kunio-kun games in the series to play instead.