Parody games have a long history over in Japan. Although the idea of taking a serious video game and making a joke title out of it seems weird in the West, Japanese gamers have long embraced parody titles to their main games. That's why a game like Super Dodge Ball (originally titled Nekketsu Koko Dodgeball Bu in Japan) could work in Japan while seeming quite the oddity overseas. "Was this supposed to be the same guys that also show up in River City Ransom?" Yes, and we'll get to that... 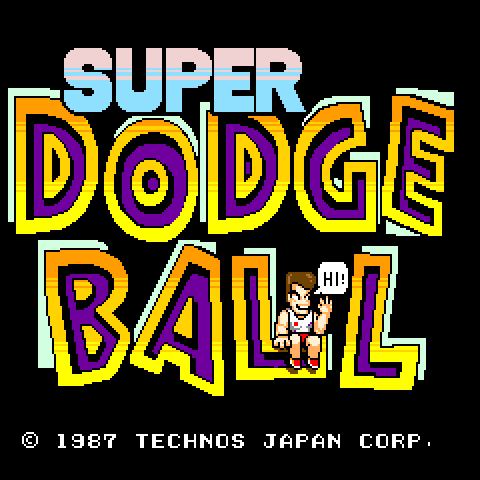 Super Dodge Ball (or whatever you prefer to call it) was meant to be a silly game, a parody spin-off of the first title in the "Kunio-Kun" series, Nekketsu Koha Kunio-kun (aka Renegade). Where in that first game bad guys would come and beat up Kunio's friends, forcing him to chase after them for revenge, here a random jerk throws a ball at the back of Kunio's head and the hero runs off after for revenge. And then... DODGEBALL!

If you played the original Renegade then you'll notice a lot of these references. The cut scenes feel like a continuation (albeit a silly one) of that first game, while many of the sound effects are ripped right from that previous title. You're still doing battle with opponents in two-screen side arenas it's just that instead of employing slick fighting moves now you're throwing balls at your foes. This is the hard life for a street tough, getting your revenge in approve tournament play. I'm sure that's a common story.

The core mechanics of Super Dodge Ball are simple. In the Arcade you were given a team of four members and you had to take out the rival team (starting with their own four members but, as the stages progressed, opponent teams were allowed to add an extra member that would refill off from the stage sides, one more per stage, for increased difficulty) via hurled balls. Each player had a fixed amount of health and hurling the balls knocked some of that health away (usually three to four ball throws would kill and opponent).

To change up the dynamics of play the game was about more than just dodging and throwing. When on the offense the players could run and throw, yes, and they could jump. With enough speed built up the team captain could also hurl a super-throw that would do extra damage. Meanwhile, on defense, players could try to catch the ball, or duck to avoid being hit. Controls were still pretty simple, about on part with the previous Renegade, while still having just enough variety to keep the game lively and interesting. 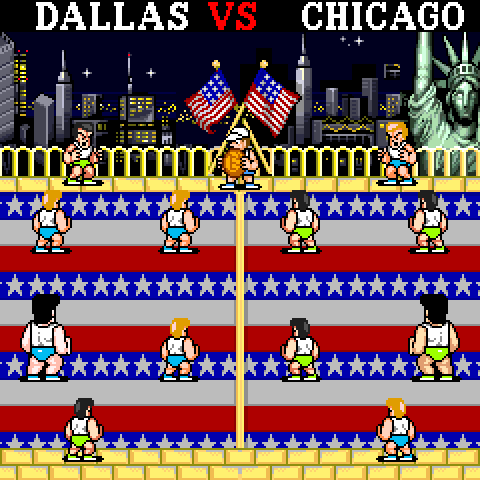 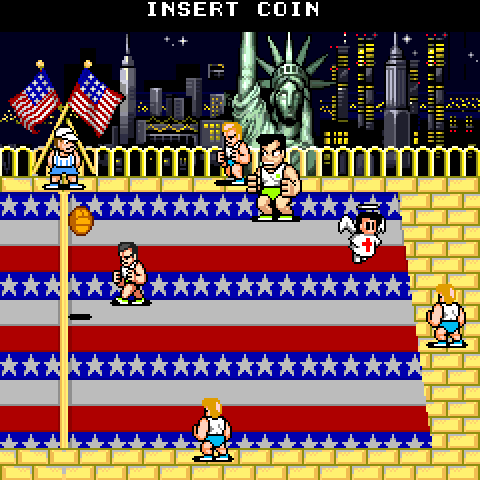 That said, it was when the game came to the NES that the real depth was added. Teams went from having nameless rosters to actual sets of named players each with their own stats and abilities. Depending on who you had on your team you could have different special throws, varying stats, and dynamic health bars. Each team in the World Cup had a full roster and, depending on a bit of RNG, different players on the computer's opposing team would get cycled in for each match. This created a game with a good amount of depth for an NES sports title.

Even with these change ups, though, it's hard to ignore that there just isn't that much meat to Super Dodge Ball. If you're playing in the arcades your task is pretty much the same each round, just with more and more guys thrown into the mix on the opposing team. Worse, there's only one "captain" on your team so there's only one guy that can do the special throw that can wallop opponents; lose him and it's practically game over at that point. Other than that the game feels very "lather, rinse, repeat" in its arcade form.

The NES version does have more depth, and more variety, but it still has its own flaws. The system struggled to show a lot of characters on screen all at once, and with even a reduction in team members -- three in the field of play instead of four -- plus all the extra characters rimming the edge of the field of play sprites will often flicker. Slow down was also frequent, especially early in a round of play right when you actually needed the game to be its most responsive. The game itself could be fun, and finding ways to use the super moves and progression through season play had its joys, but this pack certainly felt compromised.

The game did see further improvements in two later releases. A Sharp X68000 edition of the game updating the original Arcade title with improve graphics, while a later PC Engine edition, aka the "PC Extra Edition" -- took the refinements of the NES version of the game (the power shots, individual stats for teams) and added them to a package that had better graphics, smoother play, and resembled the style of the Arcade game more. That version is probably the "definitive" version of the game as it has everything fans of the title want right in a single package. Of course, it is Japan exclusive (never ported to the American version of the PC Engine, the TurboGraphix) so getting a copy outside Japan is difficult.

Even then, I question whether it's really worth spending the time (and money) to get that "best" version of the game. Even at its best, the game simply doesn't have a lot of depth. While it could be argued that Renegade was shallow for a brawler, greatly improved upon and exceeded by future games that expanded its play, that game still seems to have variety and depth in comparison to what's on display in Super Dodge Ball. Once you've played through the first stage of this title you've seen everything there is as every other stage is just palette swaps of characters, slightly changed backgrounds, and more of the same.

If you want a version to avoid, though, that would be the Game Boy release. Made a few years ater the Arcade and NES editions, this version is just rough. There's a lot of sprite flickering along with general slow-down for the game any time the ball is in motion (which, considering the sport, should be all the time). This feels like a hack job port of the game that was slapped together to eke a few extra bucks out of the aging title, but it's absolutely not worth playing for any of the Super Dodge Ball devouts. That likly explains why this version, too, never left Japan.

Regardless of the edition, Super Dodge Ball has it's delights, for short bursts of time. As far as actually expanding and improving on the Kunio-kun core, though, we'd have to wait for the next title in the series, the absolutely sublime River City Ransom.