Kids growing up in the 1980s and 1990s were treated to a large spate of Kunio-kunStarting as a fighting game befoe spinning out in sports titles (and other adventures) of all shapes and sizes, the Kunio-kun series is one of the most diverse, and hilarious, to ever grace both sides of the Pacific. titles. Renegade, Super Dodge Ball, River City Ransom, Nintendo World Cup, and Crash 'n the Boys: Street Challenge all came out at a fairly steady clip, ensuring that many (if not all) of the Kunio-kun games made out out of Japan to Western shores. That said, if you didn't somehow already know these games were all part of the same series it's unlikely you would have put two and two together on your own. 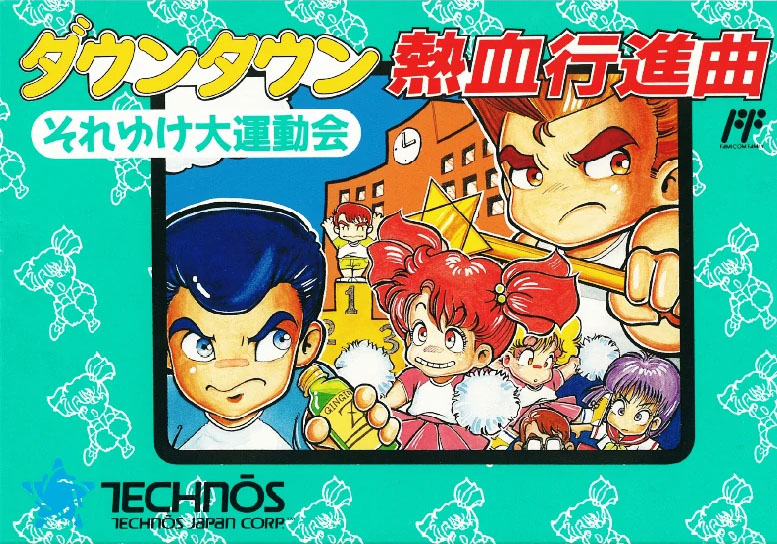 For my part, growing up in that era, I started to get an inkling that the games were related with the fifth Western release, Crash 'n the Boys. That game featured the by then default Kunio-kun style, which had become the dominant art style for the series thanks to River City Ransom, and all the action that I recognized from River City. While the localization of the games downplayed their connected nature, I knew that what I was seeing was some weird off-shoot of the brawling game I loved. But, I have to say, if Downtown Nekketsu March: Super Awesome Field Day had come out in the U.S. first (or at all, as was the plan originally, under the title of Crash 'n the Boys: Track Challenge or something) that would have solidifed it for me. That's because, through and through, this is a Kunio-kun fighing game even if it has the veneer of a sports title.

In the game Kunio goes up against the heads of the rival schools in a series of "track and field" challenges. These challenges range from a marathon to and obstacle course, plus a climbing challenge and a street "wrestling" event. The scores are accumulated across these four events (each with alternate maps and locations to play in) and then a winner of the schools is crowned. That all seems like pretty basic stuff, your standard track and field collection like many other companies had produced (such as Track & Field by Konami from this same era). It's in the delightful Kunio-kun additions, though, that the game really finds its edge.

In each of the events there are weapons scattered around the levels. As the players compete they can pick up hese weapons (or go bare-fisted) and attack the other players. This will slow down the players, knocking them over, letting the attacker get ahead (whatever that means for each event). The point may be the first to finish each event (or, in the case of wrestling, but the last person standing), but fighting is the true order of the day. Where in the dodgeball and soccer event the game followed the rules of the sport (more or less) here rules are just a thing to be ignored while the brawling happens.

The events do vary greatly in quality (this is a problem the sequel, Surprise! Nekketsu New Records! The Distant Gold Medal, aka Crash 'n the Boys: Street Challenge, also had). The strongest of the events if the fourth, wrestling, and that's because it's basically the great fighting from River City Ransom done in miniature. All four players are dropped into a two-screen wide arena, with a bunch of weapons, and they get to battle it out until their energy is depleted and only one remains standing. The fighting in River City Ransom was excellent and this game doesn't do anything to mess with it. If you liked it there you'll feel right at home in this sports event. 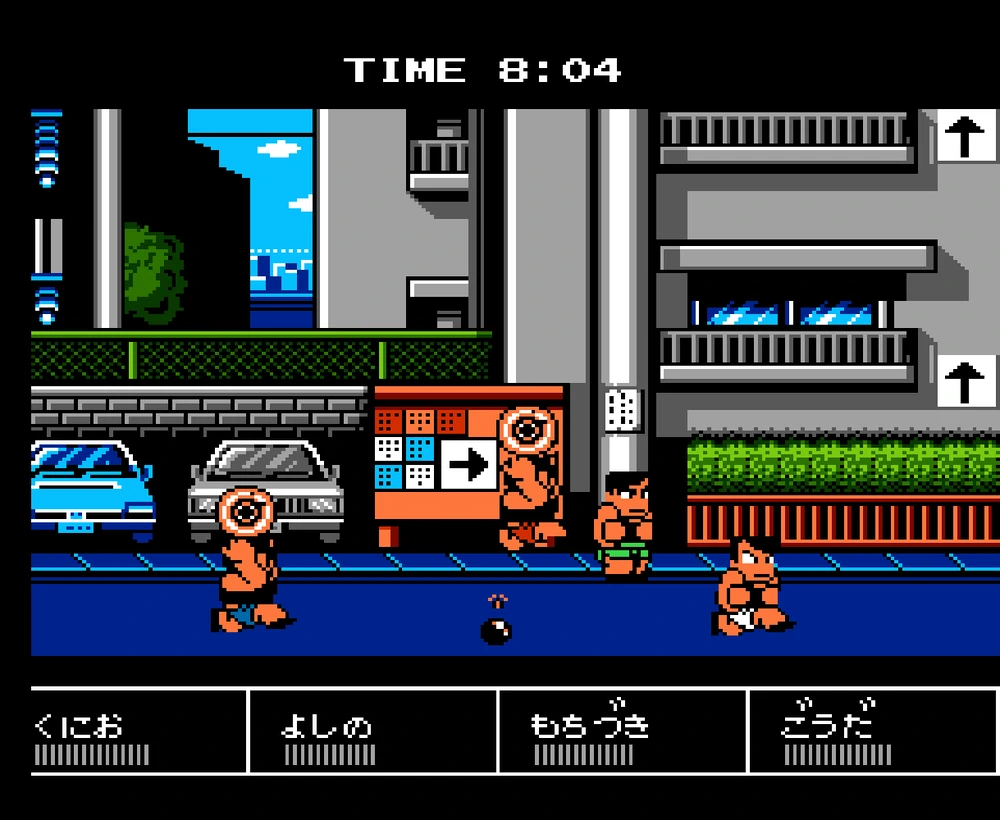 The next strongest are the two more traditional "field" events. Of them, the marathon edges out the obstacle course. The goal, of course, is to be the first to cross the finish line but getting there could be the sticky part. Over a course of dozens of screens, all for characters race, battle, swim, and brawl their way through the stage, jumping obstacles, climbing bulldings, racing along rooftops and diing through sewers, all to reach the end of this long track. It's a good event in theory, and kind of fun to play once or twice, but the event has one major issue: rubber-banding. Each portion of the race is just a few screens wide (if that), and the race doesn't move on to the next screen until all the players have left the previous section. Then the players are put back into the race on the next screen in the order they exited the previous, but without nearly as much of a lead as they had before. This does help to even out the field but te shorted leads, coupled with very agressive A.I., can make this race a chore to complete successfully.

The obstacle course is a similarly setup event -- all four players running through a short series of screens, battling each other while taking on the track -- but with a couple of big changes. The first is that the track is actively fighting against you: each section features various traps and pitfalls to avoid, along with platforming challenges to scale, making his a more active course than the previous one, but also vastly more frustraiting. This, coupled with the agressive A.I., and a shorter overall time to complete this event, makes it less fun to complete.

The least interesting event is the climbing challenge. Here the is an orb suspended over two poles and the goal is to climb to the top and be the person that breaks the ball. YYou can also attack the other players and brawl with them on the ground. The fast way to defeat this is to scale the course and break the ball beore you get knocked down, praying you do it before the A.I. takes you out. The easier way, though, is just to stand on the ground, beating up the other characters that are trying to climb (ignoring you because the A.I. is goal oriented), draining away their life so you can be the last person standing. It's a tedious slog of an event either way, and feels like it was included not because the event was a good idea but more to make sure the game had four events total.

Honestly, Super Awesome Field Day is a game that's better in concept than execution (which might explain why it never made it out of Japan). Mini-game collections are a tried and true part of video gaming (again, there were a ton of Olympic event and Track and Field collections during the NES era, and before) and I can see the sense in packing a collection of games together with the Kunio-kun brand. This first go-round with the concept, though, doesn't quite hit the mark. It's fun enough in short bursts, and the fighting mechanics are great, but in general the title feels a little too shallow (and a tad too annoying) to really be considered another true hit for the franchise. Again, it explains why this title never left Japan. 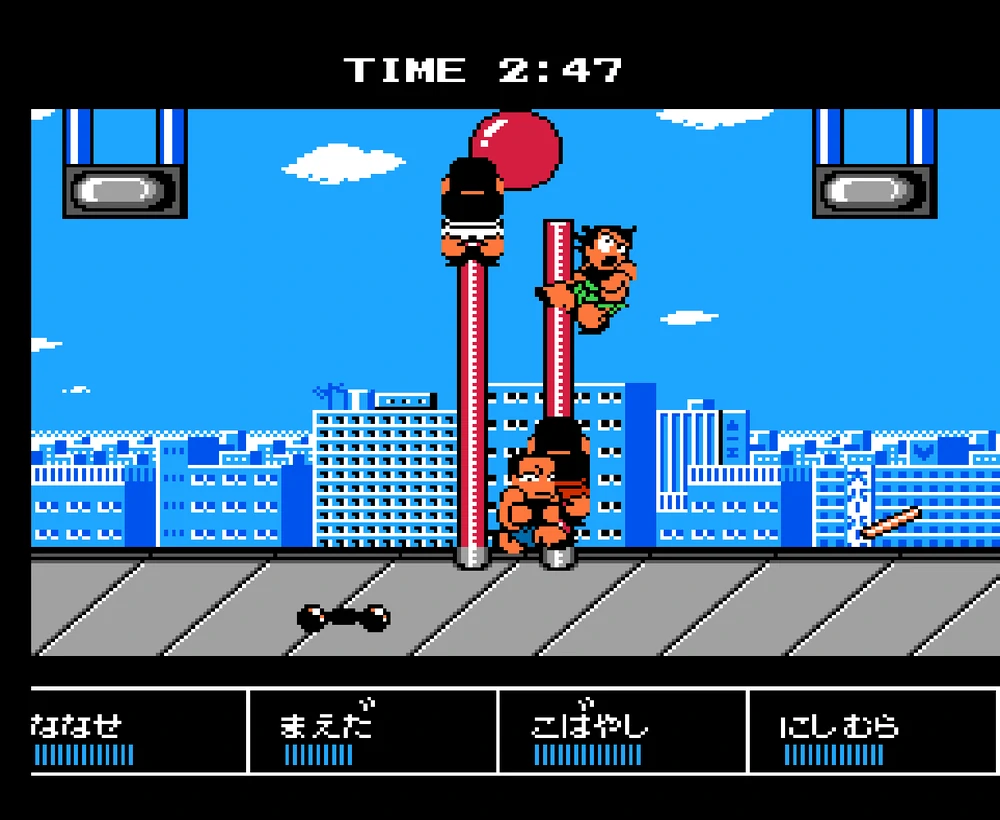 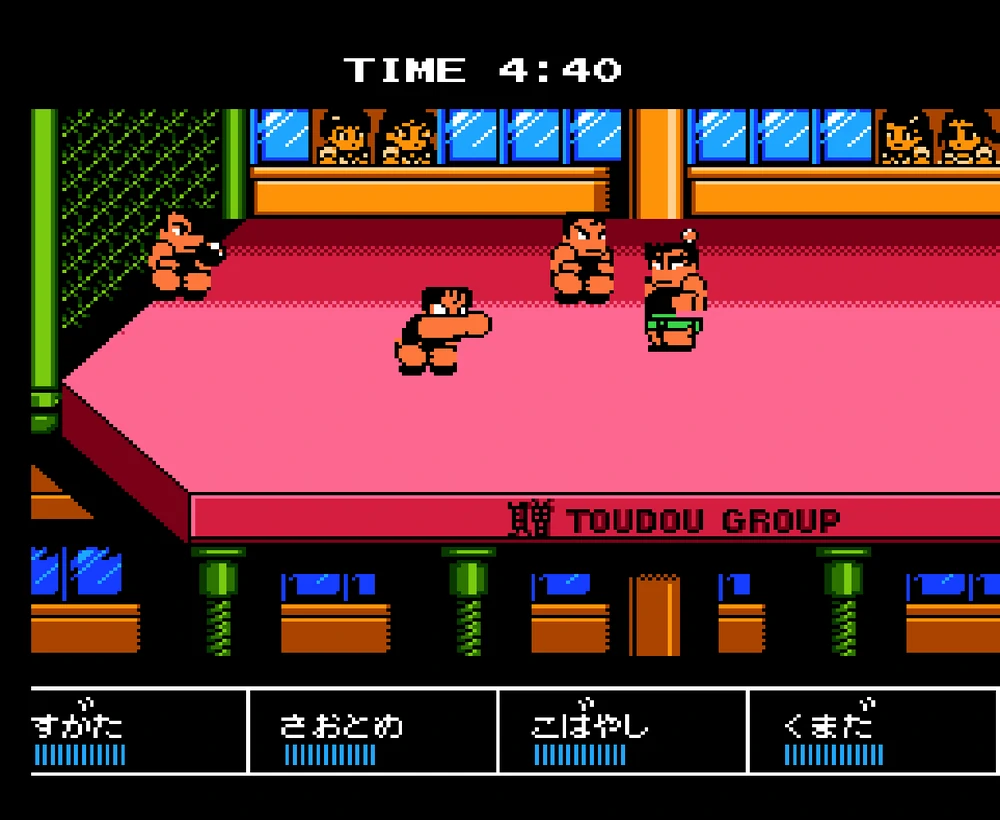 The game did have a pretty strong life in Japan, though. Along with the Famicom edition the title also got a PC Engine (TruboGraphix 16) port two years after its initial release. This version featured touched up graphics along with cute little cut-scenes and some CD-quality voice overs. it's the better package of the game, to be sure, and worth the pick up if you lived in Japan at the time. If you absolutely had to import this game to play it, the PC Engine version is certainly the one I'd pick up.

There was also a Game Boy edition. This one actually had two extra mini-games, the bread eating contest and bomb tag. Honestly, both of these games are pretty forgettable, about on par with the ball breaking game, but I guess their inclusion does make for a more complete package. And since Game Boy games are region free this would make for the one version of the game you wouldn't have to get extra hardware to play. Not a bad deal, but honestly the PC Engine version is still better.

After that, the Famicom edition saw a second life as part of the Virtual Console, and appeared again on the Japanese edition of the NES Classic. The game clearly had its supporters, and it was enjoyed enough to keep coming back, but it does feel like a first draft of this "track and field" concept for the series. The game would get somewhat better in its second form, sequel Crash 'n the Boys: Street Challenge.