How Could You Do This To Us, Daniel-San?

I think we all know that most video games based on movies are terrible. Sure you get the occasional gem, Goonies or a moderately playable Friday the 13th, but most movie-games are barely concealed bargain bin refuse. They bear the license to sell games, and they technically function, but no one fondly remembers most of these awful games.

Of course there's bad and then there's The Karate Kid. Produced by LJN (a known maker of bargain-bin refuse back in the day) and released one year after the success of The Karate Kid Part II, this game tries to coax some money out of fans of the Karate KidIt's the teen-friendly Rocky riff that defined a generation, with karate, montages, and a lot of power '80s rock, as Daniel LaRusso becomes the Karate Kid. franchise before everyone lost interest and there wouldn't be any money to be made. If anything, though, this 1987 game would act as the canary in the coal mine for the series as, after this, we had a couple of terrible movies and a period of nearly 30 years before anything worthwhile would come from The Karate Kid again.

There are any number of issues with The Karate Kid we could pick apart, but let's start with the material the game adapts. There are no cut-scenes or story-boards in the game at all, so if you don't know the story of the second film then you absolutely won't know what the heck is going on here. While I wasn't looking for a detailed recreation of everything in the movie (we don't need a swing dancing mini-game as Daniel and Kumi visit a club, for example), it would have been nice to get even a little bit of context for the story in this game at all. If you hadn't seen the second movie and were coming into this because a parent was awful and got you this instead of anything better, you'd think the game was, "karate man fights a tournament and then kills a lot of dudes in Japan until he saves a girl." That's not really accurate at all.

Hell, the fact that you have to save a girl at all seems absolutely tacked on and yet you do it twice. First you have to climb a pole at the end of the typhoon level to save a little girl up there (for reasons that aren't explained and, again, had you not seen the movie you wouldn't know to do this), and then you have to save Kumiko at the final battle arena, which also isn't explained and, in the context of the game, makes no sense. Karate man kills dudes with his feet. Why does he look for love (especially love that doesn't involve kicking dues to death)? 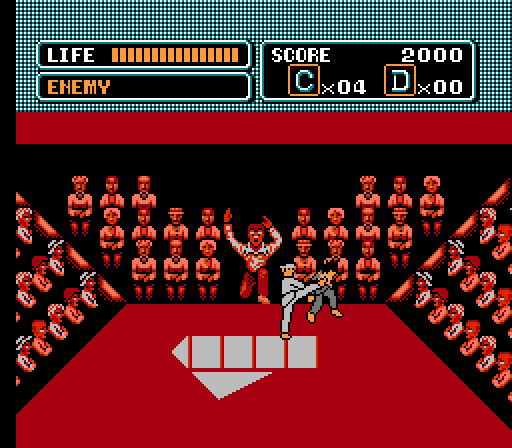 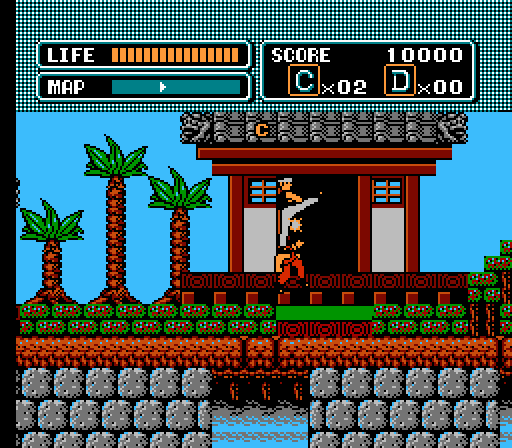 Really, the big issue with the game is that, with its lack of cut-scenes, and the fact that it's only four stages long, the game ends up criminally short. Had this game come out after the first movie, with recreations of fights against Johnny, back in the halcyon days of 1984, its short length wouldn't seem so bad. Games made back in 1984 on the NES were generally quite short and had similar mechanics (just like this awful title). That wouldn't have made this a good game but it would have at least explained it's awfully short length. Instead, though, this game came out a year after lengthy adventures like The Legend of Zelda and Super Mario Bros.. There's no reason for this game to be as short as it is except that LJN didn't want to invest much time or money on it's development.

Add to the short length the game's punishing difficulty. Daniel doesn't control well, for starters, and wile he can kick and jump kick and, well, kick some more, he has bad reaction times, a bad hit box, and weak attacks. This was tolerable, to a point, in the opening stage of the game, the All Valley Tournament, when you just had to face one guy on the mat and could try to cheese your way through the fight (hint: kick a bunch). But once you get into the three stages and actually have to deal with platforming along with fighting guys (and obstacles), Daniel's general lack of any ability really hits home.

The game only has one set of dudes it'll throw at you across all the stages. Their gi color will change as you progress (likely just due to color limitations of the system) but, otherwise, they all look and act the same. Guys will appear randomly in front of you, generally part way into the screen, giving you little time to react. Worse, there are absolutely no invincibility frames, so if they hit you you can get hit by them again almost instantly. Just watch two guys magically come at you from both sides, kicking you back and forth like a ball, as your health drains away.

The stages are also littered with environmental obstacles. The worst is certainly the second stage, where junk, and birds, constantly fly across the screen, forcing you to soak even more damage that's simply unavoidable. Then you have to try and climb that pole at the end of the stage where, every time you get hit by this environmental junk, you get knocked down and have to try again. The only way to finish the stage is through sheer luck. 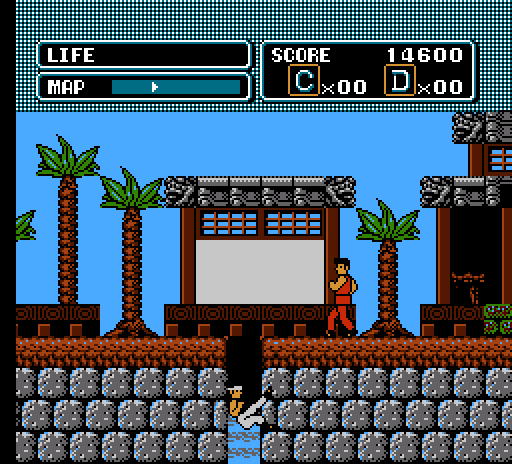 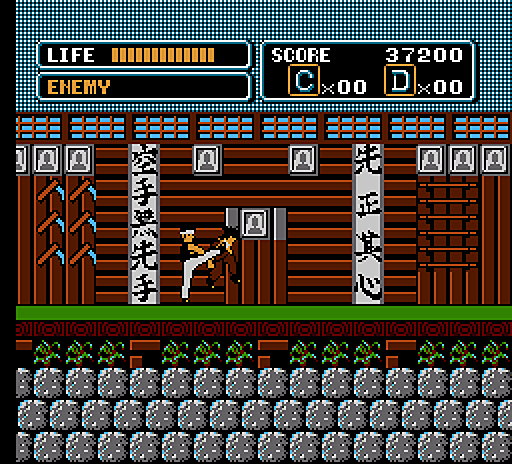 Making it through all that, across all three of these stages, then means you have to take on Chosen for the final battle. You better be good at the terrible fighting at this point, though, because even if he doesn't kill you there's still a way you can lose: Kumiko. See, she's at the edge of one side of the platform where you fight Chosen and, if she gets hit (just kneeling there, being useless), she'll move back some. If this happens enough she'll plunge into the water, which counts as a death for you (because while being useless she also never learned how to swim). And considering that Chosen can simply touch her and push her back that means that every time you hit Chosen, and he goes backwards because of it, you'll only sending your lady friends closer and closer to her death. It's obnoxious.

Put bluntly, 1987's The Karate Kid is a mind-bogglingly bad NES game. I've never been more irritated by a movie-based game before, and as a child of the 1980s I suffered through some real stinkers. There are probably games worse than The Karate Kid, ones where the game was released with some critical bug that means you can't finish it because it locks up before the end, or games made so early in the life-cycle of a system they were rushed out and died a sad death. But for games released in a system in its prime, games that are technically playable an that you could complete them (if you really wanted to suffer through that), I don't think you'll find anything worse than The Karate Kid. It's just that bad.