It's interesting going through the old Teenage Mutant Ninja TurtlesOriginally dreamed up as a parody of Marvel's Daredevil comics (going so far as to basically reproduce to opening shots of that comic's hero gaining his powers), the Teenage Mutant Ninja Turtles not only launched a sudden boom of anthropomorphic fighting animal comics but have, themselves, starred in multiple comics series, TV shows, and movies. films as you realize just how much those heroes, and the whole idea behind them, is really just an extension of the era they arrived. Even if you ignore the dark and broody comics that came first, which themselves were an answer to the uber-gritty superhero comics of the time, the TMNT exist at a crossroads of early 1990s culture, mixing in surf lingo, fun-loving bro-out heroes, and a lot of pizza. The Turtles are quintessentially about a specific time and place. 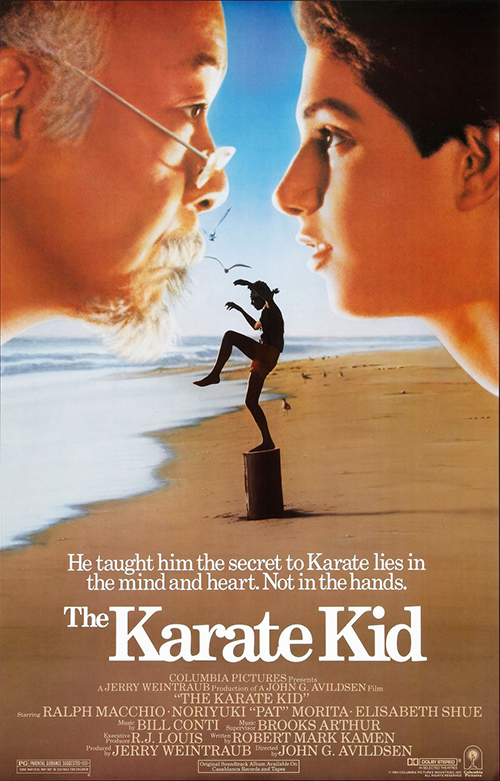 Arguably the Turtles could escape their own decade and continue on because, deep down, everyone loves watching humorous heroes beat the shit out of bad guys. But can the same be said for the 1984 drama-action-whatever film The Karate Kid? With NetflixOriginally started as a disc-by-mail service, Netflix has grown to be one of the largest media companies in the world (and one of the most valued internet companies as well). With a constant slate of new internet streaming-based programming that updates all the time, Netflix has redefined what it means to watch TV and films (as well as how to do it). taking over production of Cobra Kai, the TV-revival of the 1980s franchise (that, I assume, ignores the Hillary Swank-starring fourth film and the Jaden Smith-starring reboot), it seemed like a good opportunity to go back through and see what the original series offered to understand what make this franchise a part of the 1980s zeitgeist before we look at where it is now and see if the franchise really can survive in the 2020s (and beyond, maybe)?

That said, if this first movie is any indication, The Karate Kid exists at a singular point in cinematic history that isn't easy to recapture or extend. While the production values are solid, this is a movie that feels of-a-piece with family friendly fare or the era, slightly better directed and produced than a made-for-TV after school special, but still tonally in the same genre. It's a movie that taps into all the cultural touchstones of the era -- 80s rock, cinematic love of montages, and the fact that every kid in the 1980s thought karate was super cool -- and blends it all together in a movie easy enough for anyone to consume. The movie doesn't challenge anyone, in any way, but it does give audiences a Rocky for the teenage set, and is there anything more 1980s than Rocky? He defeated communism!

The film stars Ralph Macchio as Daniel LaRussso, and if there's any actor more tied to this franchise, and the 1980s in general, than Macchio I can't think of it. Daniel is a New Jersey kid, born and raised, but his mom gets a job across the country (working at a restaurant, which is a little weird viewed through today's lens), so they pack up everything they have and move across country to L.A. Being the new kid, Daniel struggles to make friends, but he does catch the eye of rich and popular girl Ali Mills (Elizabeth Shue) at a beach party, and the two have an instant connection. This is a problem for Johnny Lawrence (William Zabka), ex-boyfriend of Ali, and he gets an instant hate-boner for Daniel. A black belt at the Cobra Kai dojo, and leader of his clique at high school, Johnny beats the crap out of Daniel, more than once, to punish him for, well, existing.

As it happens, though, Daniel is chased home one night by the Cobra Kai jerks, and his beat down at their hands is interrupted by Mr. Miyagi (Pat Morita), a kindly old soul who works as the maintenance man at the apartment complex. Miyagi knows his family's form of karate and is able to easily best all six (or so) of the Cobra Kai teens. He helps Daniel up and, after talking with the kid, agrees to train him in the Miyagi karate style. A truce is struck with the Cobra Kai under the agreement that Daniel would train for two months and then enter the local karate tournament. If Daniel wins, the Cobra Kai never touch him again. All he has to do is win. 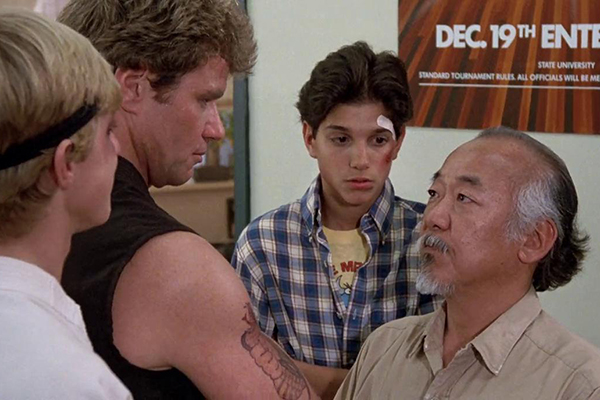 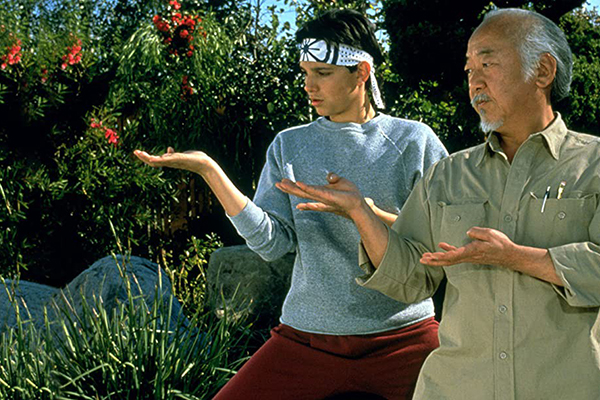 In my head I always think of The Karate Kid as an action movie. Certainly the most memorable part of the movie is the big karate tournament where Rocky... I mean Daniel-san battles through the various matches to take Johnny on, mano-a-mano, while the crowd around his cheers adoringly. This is the big, iconic moment, the part every kid from the 1980s has seen over and over again largely because we'd catch the movie halfway in while flipping through the TV channels, and then we'd watch to the end from there. But the movie isn't really an action film; it's more of a teen drama that just so happens to have an action sequence to cap the film.

In that regard it's very much in the vein of Rocky, another drama from the era. Both feature an underdog no one figures will win, dominated by a jerk filled with braggadocio, all leading up to a final confrontation between the two. The films also feature their unconventional coaches, a girl they fall for, and the rousing montages that mark their training for zero to hero. Sure, Karate Kid rewrites the ending of Rocky, actually letting Daniel win his big match, but it's easy to see where the creators of this film drew from.

Arguably this film is better than Rocky, at least when it comes to pacing. Although this film clocks in at over an hour, it never has pacing issues, paced with plenty of solid dramatic moments, scenes of teen love and teen heartbreak, and a number of short skirmishes that eventually build to the big fight sequences at the end. It's really a well oiled machine, picking up viewers quickly and sucking them along through the film. Rocky is a good film for the era it came out in, but that movie suffers from 1970s pacing. The Karate Kid is Rocky filtered through the 1980s and it benefits from it substantially.

What grounds the film and makes it work now are the actors. Really, it's the dynamic duo of Ralph Macchio and Pat Morita that give the film its energy and heart. Their playful interchanges, the father/son style relationship they forge gives the film its soul. Where everyone in Rocky thinks the boxer is destined to lose (which, in fact, he does even if he won in his heart), Miyagi knows Daniel has the heart to win, he just has to believe in himself. Of course, Morita would win an Academy Award for his portrayal here, but Macchio is just as good, giving Daniel an earnest heart while playing a slightly irritating teenage boy (all teenage boys, mind you, are irritating, so he nailed the character). The side characters as good, from the fun and endearing Shue to the dickish Zabka and the Snidely Whiplash-evil Kove as Cobra Kai dojo owner John Kreese, but it's Morita and Macchio that make The Karate Kid such a winning vehicle. 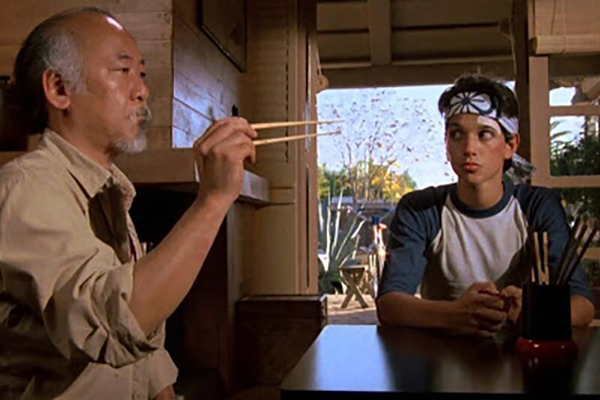 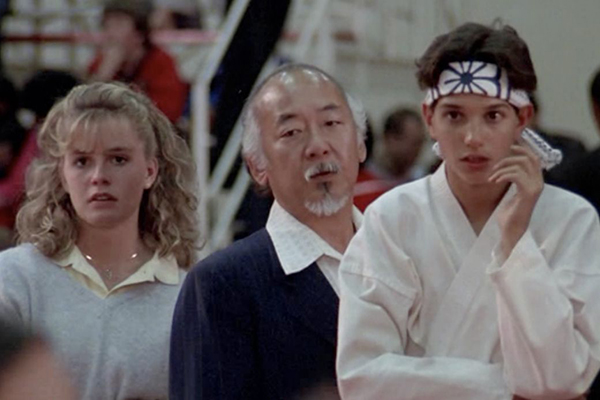 It's a good thing the characters and story as so good because, frankly, the karate in The Karate Kid is wretched. Obviously they hired actors for their acting ability and not the way they could pull off fighting maneuvers, but the karate here is laughably bad. Back in the day people probably didn't know any better, but we've had over 35 years of martial arts films since and you can see the obvious flaws in the choreography here: pulled punches, limp hits, and telegraphed moves that any real pro should be able to avoid. Plus, frankly, a kid spending two months training, even if they were an intensive two months, wouldn't be able to best black belts that had been training for years. Sure, maybe if we're kind we realize that Johnny had a change of heart and wanted Daniel to win, but our hero had to fight his way through multiple rounds and most of those fighters should have wiped the floor with his ass. But it was a different time and audiences couldn't see it, I guess.

Still, bad karate aside this film holds up surprisingly well. It's certainly a film of the era, and all the montages and bad 1980s music ("You're the best... around!") set it as a specific film of a specific moment, never to be recaptured again. And yet, because the basic story of the movie -- a kid finds his own courage to stand up to bullies at school -- remains timeless, so does the core story of this film. Probably not ever kid growing up now will fall in love with The Karate Kid the way audiences did back in 1984, but I could see the film still resonating with kids even now. The time period may be horribly aged, there there's a timeless quality to the film that could work in any era.