And the Case of the Dreadful Bore

About a decade ago we had this weird moment where three different productions of Sherlock Holmes were all put into production at the same time. Now, Sherlock Holmes has been around as a character, in film and TV, for as long as those media have existed (there's an extensive silent film catalogue for the character, if you're so inclined to go and watch), but generally one company or another will take the lead in adapting the character for the screen (in whatever form that will take). Of course, with the stories falling into the public domain (all but the last of Sir Arthur Conan Doyle's stories) it did mean that various companies could all make Holmes stories without having to worry about copyright. 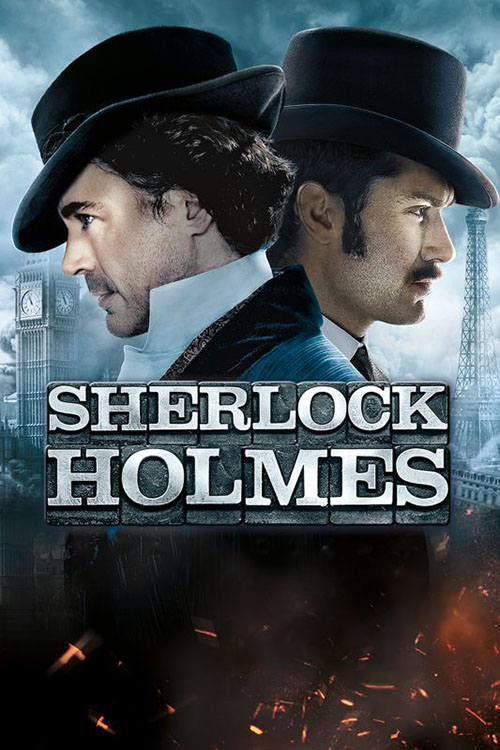 That's a big reason why we had competing versions of the character on British TV (with Sherlock starting in 2010), another on U.S. TV (Elementary, starting in 2012), and on the Silver Screen there was Sherlock Holmes starring Robert Downey Jr. Three different visions, two of them modern, and the other starring the biggest star of the time. That's a lot of Sherlock Holmes, although each did give their own specific take on the character.

Of the three versions I do feel like the theatrical film is the weakest of the set. Say what you will about the puzzle box nature of Sherlock, which did at times wear thing, but it's stories were not only splashy but also put the focus on the cases. Meanwhile, Elementary stuck better to Holmes's roots, taking a case-of-the-week procedural format to the episodes, which suited host CBS just fine, but that did mean that, week after week, Holmes was a detective first and foremost. By comparison, Downey, Jr.'s Holmes is, what? A detective, but only hardly. A thug in many respects. Mostly he's a glitzy, fast-talking superhero that seems to have walked off the set of Iron Man (released the previous year) and right into Victorian England.

Make no mistake, getting Robert Downey, Jr. for the lead role of Sherlock Holmes was a good get for the film. He was probably still cheap to employ at that point, having been paid a reported $0.5 Mil for the first Iron Man, which went on to make huge amounts of money and launch a franchise. He's come back to make that films sequel, Iron Man 2, for $10 Mil, but in between we had Sherlock Holmes and you have to think that for a film that went on to make $530 Mil at the Box office, paying whatever Downey, Jr. wanted (which surely wasn't as much as the $10 Mil he'd make a year later) was a good deal. He was suddenly a name again and now they had him on their picture. Win-win.

Thing is that I don't think Downey, Jr. is as good a fit for Sherlock Holmes as he was for Tony Stark. Yeah, effectively he plays the two characters the same way -- foppish, with a bit of booze and drug addled mentality, and a motor-mouth for quips. But there's a reserved quality to Sherlock Holmes that Downey, Jr. tries for but never nails. Where, in the actor's hands, Tony Stark is infectious to watch (even at his most grating; see Iron Man 2) Sherlock lacks that sparkle. Downey, Jr. is holding back and the character never really comes together properly. He's a collection of ticks without the needed beating heart beneath. 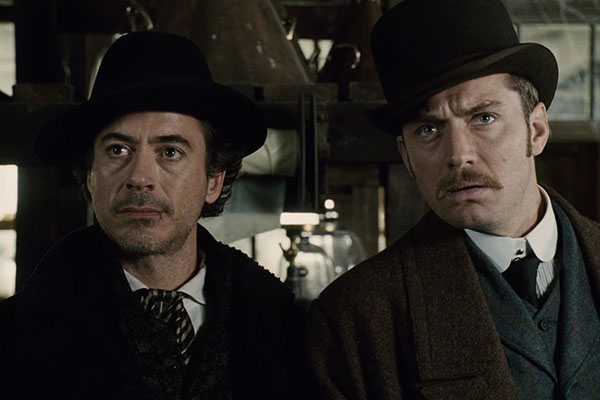 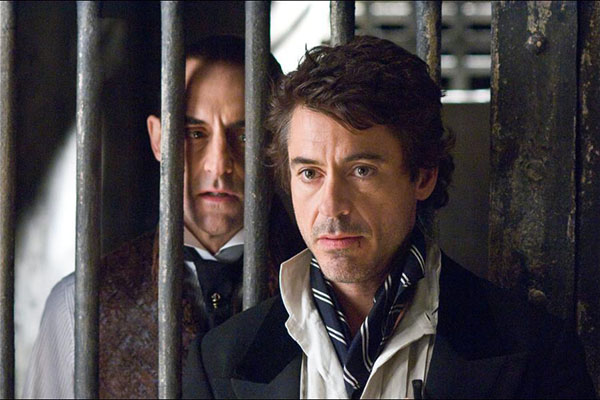 That's a big reason why this film doesn't quite come together. This is a film very much focused on Sherlock Holmes as even the buddy aspects of the story are played down. Holmes (Downey, Jr.) attends to his last case with fellow compatriot Dr. John Watson (Jude Law) before the good doctor quits the "consulting detective" gig and goes off to marry his beloved, Mary Morstan (Kelly Reilly). However, this one last case refuses to be put to bed and Sherlock and John have to meet up to solve the case and restore both of their reputations.

The case in question: that of multiple-murderer Lord Henry Blackwood (Mark Strong). Blackwood, an occultist and generally evil guy, was caught in the act of trying to sacrifice a girl by Holmes and Watson. Sent to the gallows, his case should have remained closed, but then he appears again, seemingly having broken out of his sealed tomb, only to commit further murders. Determining what is motivating these murders and what the real goal may be becomes to focus of our heroes as they avoid explosions, fight thugs, and work to save the good people of London.

The story is, essentially, a superhero film with Sherlock slapped on top. It has all the action beats you'd expect from a Marvel film, just slapped over the Victoria era with the world's most famous detective on the seen (sorry, BatmanOne of the longest running, consistently in-print superheroes ever (matched only by Superman and Wonder Woman), Batman has been a force in entertainment for nearly as long as there's been an entertainment industry. It only makes sense, then that he is also the most regularly adapted, and consistently successful, superhero to grace the Silver Screen.). I get the impulse to do this, especially with Downey, Jr. in the cast, but it all just feels like an awkward fit. The tone of the story is all wrong, movie at fast pace sometimes without actually slowing down to focus on the actual case. Other times, the movie gets mired in it's own storytelling, pushing so many details into the later acts that those moments then drag as the film has to explain everything it's been ignoring. Sherlock is a deliberate and steady detective (as illustrated perfectly in Elementary) and apply the superhero mold to him simply doesn't work. At least, not here.

With Downey, Jr. struggling to carry the weight of the film (he tries but really doesn't succeed, especially in the sleepy back-half) the film need someone to balance him out. The sequel will do this by pitting him against his greatest foe, Moriarty (seen here only in shadowy glimpses), but this film doesn't use the great "consulting criminal", instead putting villain duties on Blackwood. Mark Strong was certainly game for the part, playing the character as a scenery chewing villain. Unfortunately the film under uses the character, shunting him into a storyline where he can't even appear on screen for most of the run time, leaving his evil works to a series of unnamed goons with little in the way of personality. There's a void at the middle of the film that none of the cast can really film. 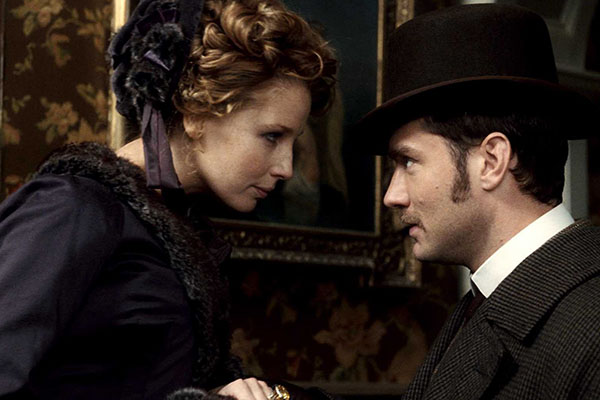 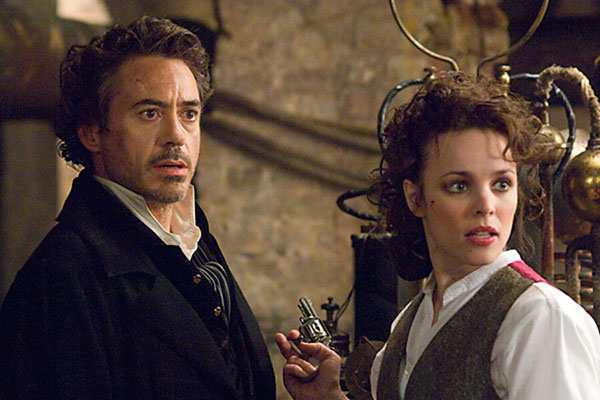 Maybe, if the focus had been put more on the characters around Sherlock that could have helped. Watson is amiably played by Jude Law, and I do like his performance as the detective's second-banana. The film, though, doesn't give Watson anywhere near enough focus. If he's not helping Sherlock he disappears completely from the film, this despite the fact that he actually has a compelling storyline: trying to find a way to balance his friendship and work with Sherlock against the woman he loves, Mary, and trying to get her all she needs. The focus should have been on Watson, at least for a strong B-plot, but it just wasn't there.

Watson, though, is still treated better than poor Irene Adler, played by Rachel McAdams. Honestly, McAdams does a great job with the character, playing her with a whole lot of charisma, making her a proper equal in style and attitude to Sherlock Holmes (as she should be). Unfortunately this is a character with a lot of back-story with our hero, none of which is really covered, and all the underpinnings of their dynamic are glossed over by just dumping her into this story in what is clearly the middle of her arc with Sherlock. She's a criminal, but not a "bad" one, and she and Sherlock have been circling each other for years (as we're told). Yet she doesn't get a lot of scenes to really play against Sherlock and, like Watson, she disappears for big stretches of the story. It would have been better to make Adler the focus of the A-plot, an agent working directly for Blackwood before she turns against him, that way she could be involved in the story, but the film once again doesn't have any consideration for anyone that isn't Sherlock.

Beyond all those story and character considerations, though, this film just isn't a lot of fun to watch. As directed by Guy Ritchie, who did make the great low-level crime-comedies Lock, Stock, and Two Smoking Barrels and Snatch, this film lacks the spark and panache of the director's earlier works. Despite a huge budget and great costumers and set designers, this is an ugly, bland film given no artistic eye. It's choppily edited, with bad action and worse flow, and it really just doesn't hang together at all well. Competent would be an overstatement about how well this film works as it is, at times, barely watchable.

Sherlock Holmes was a big hit when it was released, and went on to spawn a just as successful sequel (although the proposed third film has yet to get made, let alone all the expanded universe media that Downey, Jr. wants to make) and I can see why that was the case at the time. It's a light and breezy movie on first viewing and it is easy to get caught up in the movie as it trucks along. It's not a very well made film but it is edited n such a way that it hardly slows down for the first two acts. It does fall apart in the last act but not enough that people looking for "Robert Downey, Jr. - Superhero" would have been disappointed. Going back and watching the film again, though, that's when all the flaws are obvious, when you're no longer wrapped up in seeing the movie for the first time and the cold light of reality seeps in. This is a film that you can only really watch once; after that, with the facts of the case laid bare, you realize just how empty and shallow it all really was.