Back to the Original Era

We've covered a lot of Kong recently. If you've been keeping up, we've going from the original 1933 King Kong (and sequel Son of Kong) to the Toho monster feature King Kong Escapes, then the very 1970s remake King Kong. All of this has allowed us to see how the "monster" of Kong is viewed in various eras and what people are looking for from their monster movies. 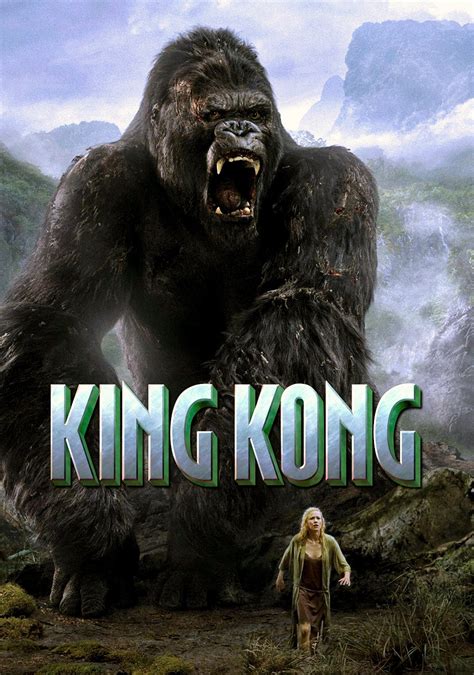 This then brings us right back around to the 2005 Universal remake (and the last Kong film in Universal's library before the license switched to Warner Bros.). In each era, you may recall, we commented on how well the films were able to (or more realistically, not able to) match or improve on the original film, via it story, its effects, or its ability to connect with the audience. RKO's original feature is a classic for a reason and the various films that have come out since have struggled to match not only the spectacle but also the heart behind that original film. The 2005 film was director Peter Jackson's chance to try and say, "this is how you do a remake of King Kong."

Jackson was given a $200 Mil budget from Universal, and allowed to create his vision, however he liked, to create the "best" King Kong he could. Bear in mind that was the first film Jackson made after creating his original Middle-earthCreated by J.R.R Tolkein, Middle-earth is the setting for the author's big sagas, featuring the characters of hobbits, dwarves, elves, and men. trilogy, The Lord of the Rings, so the director had a lot of clout to spend and this was the film he decided to make. Renowned director known for adapting a formative work taking on one of the classic monster films with a budget to do as he liked: what could go wrong?

Well... a fair bit, although I won't go so far as to say that this film is a complete waste. Jackson clearly had a vision to take the original film -- the original era, the same base story, similar beats and ideas -- and recontextualize it for a modern era. In some ways he does succeed; the story gives many of the characters more to do while also getting rid of some of the questionable politics from the era (we'll cover the things he made worse in a moment) while also fleshing out story and background to give the film a more lived in feel. That is, at least for the first hour and the last hour; The biggest issue with Jackson's King Kong is that it's a long, bloated mess that simply doesn't know when to stop even when it should.

The movie essentially follows the same beats as the 1933 original. Director Carl Denham (Jack Black), after coming off a bad pitch movie for his recent film, elects to steal the film he's already shot and run to the ship (that will take him and his crew to his planned shooting location) to get the film running -- better to ask for forgiveness, right? Only issue: no lead actress. Denham heads out to the street to look for the right actress (read: someone that can fit into a Size 4) that would be willing to go on a cruise to Singapore (not that they will actually be filming in Singapore) to shoot the movie of Denham's dreams. That's when he meets Ann Darrow (Naomi Watts), a down on her luck Vaudeville actress just looking for her big break. 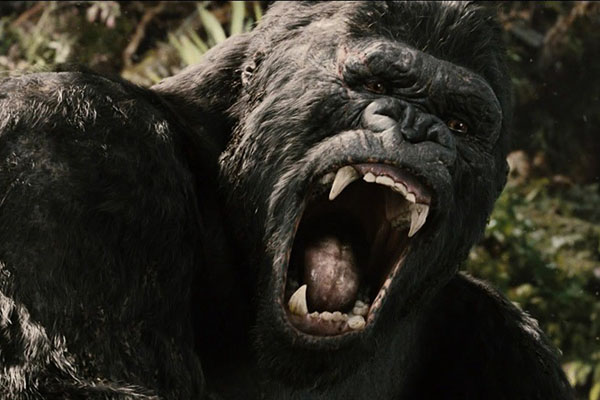 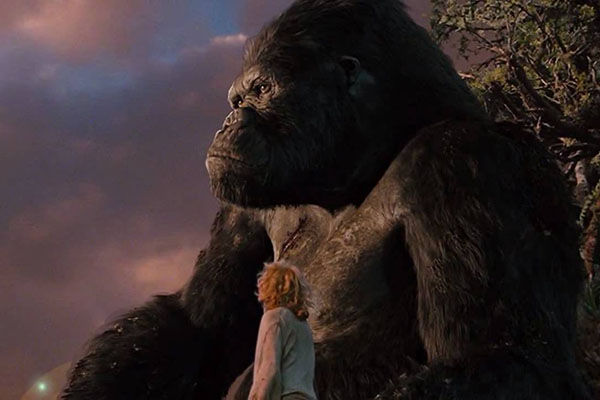 Cast and crew loaded up on the ship, along with luckless writer Jack Driscoll (Adrien Brody) who hadn't planned to go on the voyage, they head off for the location Denham had planned: Skull Island. Once they get to this location (after many promises to the ship's crew and a lot of cajoling), things don't go easily. The local tribe hates the crew and attacks them. They do love the look of Ann, though, so they kidnap her off the ship and put her out on a sacrificial altar for their local god: the giant ape Kong. This leads the crew of the ship to launch a rescue mission for Ann, but then they find that Kong isn't the only giant creature on the island as dinosaurs, along with giant insects and crustaceans, also exist. Many of the crew die, but they (or, really, Driscoll) are able to save Ann. And that's when Denham has his next bright idea: capture Kong and take him back to New York to be his next big spectacle. Clearly that will go well...

There were a number of things I really rather liked about this version of King Kong. I appreciated that the first act (the first hour) of the film took time to flesh out the cast of characters more. This worked to the benefit, especially, of Ann who gets to be a real performer, have real needs and motivations, and be more than just a damsel in distress. This extends to expanding the original script and taking some scenes, like those where the crew of the ship hates "having a woman on board" and talks down to the actress and putting that in a film-within-a-film, removing the distaste from it a fair bit. The politics, and the characterization, around Ann work much better here than in the original film.

At the same time, it does seem like Jackson paid attention to what worked in the 1976 remake: the bond between Beast (Kong) and Beauty (Dwan, in that film). He's not a monster, not really, and allowing him and Ann, in this case, to share a bond and find something like a friendship, makes the last act of the film more interesting, more emotional and heartbreaking. Jackson takes that concept and allows his last hour to really spin out, to find moments of beauty among the "kaiju action" (although Kong really isn't a kaiju) that makes the last act truly compelling.

The issues with the film, and where things really go off the rails, is the whole middle hour of the film. That hour, when the film is located at Skull Island, is just a tedious chore. I have to wonder about the thought process for this here, whether Jackson wanted to create his own Jurassic ParkWhile ever kid has dreams of seeing dinosaurs, Michael Crichton gave that dream a reality, at least on paper. His two Jurassic Park books spawned a movie franchise that's gone five movies strong (with no signs of slowing down), all because people love seeing dinosaurs made flesh., or maybe he was just in love with the special effects he could create and didn't want to edit out any of his ideas. Whatever the cause, we we end up watching is a bunch of actors clearly running against a green screen as poorly-aged CGI moves around them, all while fodder characters we don't know, and don't care about, die left, right, and center. None of it has any weight, or meaning, and it amounts to nothing. 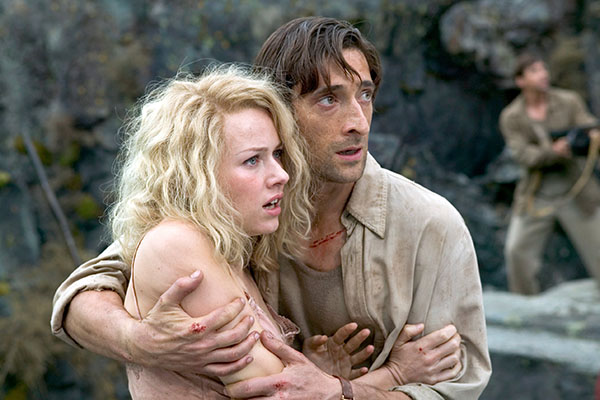 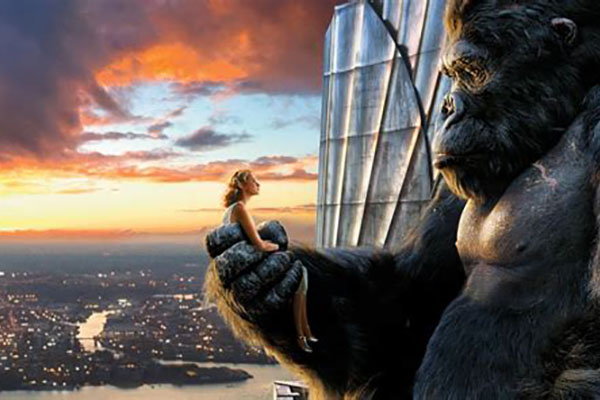 The scenes that work best on Skull Island are the ones between Kong and Ann. These moments, where he evolves in her eyes from monster to protector to person, adds a lot of character and shading to both Kong and Ann. Ann becomes more interesting as a person as she see Kong and gets seen through his eyes, while Kong gets to be the most realistic and compelling version of the character yet put on screen. Naturally it helps that Andy Serkis plays Kong in the motion-capture scenes and he's the master of mo-cap performances, but it's all of this, working together, that really helps. The action sequences that sing, like Kong fighting three dinosaurs to save Ann, have weight and meaning because we actually care about each of these characters, as opposed to just watching a bunch of extras get offed to up the body count.

Of course, the worst sequence in the film doesn't have any monsters in it at all. Instead its the scene where the crew comes to the island and gets attacked by the tribe. I want to think that Jackson saw how racist the original depiction of the tribe was and purposefully did something different to try and make it... better? You can see this in the sequence near the end, the theater sequence when Kong is presented to the New York audience, as the actors playing "the tribe" look like the characters from the 1933 version of the film. And yet, somehow, the representation of the tribe here is even worse. Yes, there's not black face, but the tribe is presented not in an understandable way -- confused by new people, curious, maybe fearful -- but as bloodthirsty cannibal savages. It was harder to watch, frankly, than any previous depiction in the various films.

I think much of the middle hour of this three-hour "epic" could honestly be trimmed down to about 20 minutes and it would work so much better. It wouldn't be sloggy, it would have real energy, and best of all it would focus the film down to what was working: Kong and Ann. Also, re-shoot the tribal sequence to get rid of the (I have to hope) unintended racism to make that whole sequence better. That middle hour just needs so much work as it drags the rest of the film down. I honestly started to zone out at times during this middle section because it's just so long and tedious.

It sucks, too, because that last hour is epic, a sweeping story of Beast and Beauty that sings. It's the best version of the New York portion of the story I've yet seen and it's absolutely a show stopper. If the film could have funneled us from the pretty good first hour into the absolutely stunning last hour, it would have been fantastic. But it stumbles so hard it becomes a flabby, awful mess. I want to like this film, and I think there are some absolutely amazing high points in the film. In general, though, the 2005 King Kong is not replacement for the original film. It tries, and at times it succeeds, but the whole of this film fails under the weight of its various parts.