Attack of the Rubber Suit Monsters

Although most King Kong is a giant ape, most kaiju fans would not consider him to be a proper "kaiju", not like Godzilla or that monster's ilk. Their arguments doesn't really make that much sense to me as they're both giant monsters that go around and terrorize cities, and more than once they have fought each other, but still, I know plenty of fans of the kaiju genre that would argue King Kong has no place in their ranks. This, of course, despite the aforementioned battles with kaiju and the fact that Toho, the kaiju studio, even made two King Kong films. 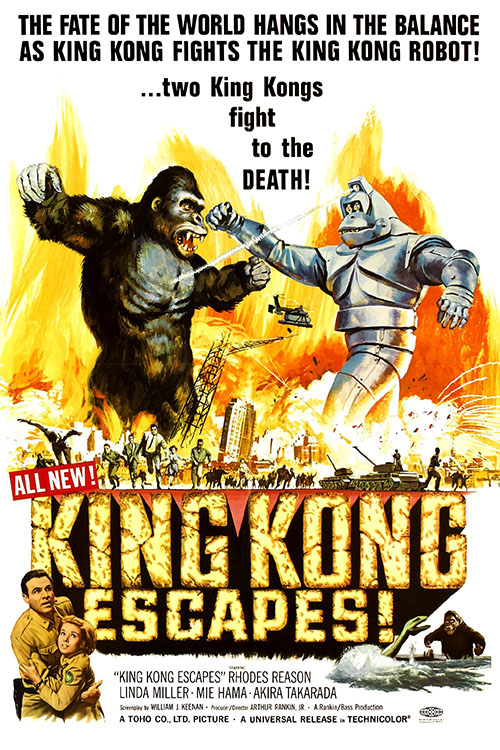 The first of the two was, of course, King Kong vs. Godzilla (not to be confused with the 2021 release, Godzilla v Kong). But then, a couple of years later, Toho teamed up with Universal for another stab at the giant ape with King Kong Escapes. This is a film that focuses squarely on the giant ape, and feels much more in line with the classic films from RKO Pictures. Well, that is if RKO had made their films cheaply and with guys in rubber suits. This might be a Kong film, but it's truly a Toho production, through and through.

We start off with the evil Dr. Who (Hideyo Amamoto), a scientist working in the arctic to mine the mysterious Element X. This element, which his foreign backers want, could be use to cause devastating damage via super-weapons. Naturally, whoever has this element would be the dominant superpower on the globe, and Dr. Who (no relation) just wants it because he's an insane mad man. The element is dangerous and highly radioactive, so special equipment has to be used in the process. And by special equipment we mean that Dr. Who (no relation) built a Mechani-Kong, a giant robot King Kong, that can dig down into the ice and rock and pull out Element X. Unfortunately for the robot, Element X is also magnetic and it fries the robot's equipment, stalling the project.

To get things back on track, Dr. Who (no relation) needs a new giant ape to do the digging, and that means he needs the real Kong. It just so happens, at that point, that the real Kong has been discovered lurking on a remote island. The team that found him -- Commander Carl Nelson (Rhodes Reason), Lt. Commander Jiro Nomura (Akira Takarada), and nurse Lt. Susan Watso (Linda Jo Miller) -- want only to protect the giant ape, but when they discover that Kong has been kidnapped, they think they know just who might be behind it: their old friend Dr. Who (no relation). Sure enough, the doctor eventually captures the team so he can motivate them to talk to Kong (who, for some reason, understand English) and get him to dig out Element X. If they don't do as Dr. Who (no relation) says, they'll all die.

If you've ever watch a kaiju film, just about everything you'll see here should be par for the course. These kinds of movies aren't high cinema, they're low-grand popcorn with cheap effects and silly antics, but there's a certain appeal to seeing these monsters (read: guys in rubber monster suits) bashing against each other while cheap carnage happens all around them. I get why people watch this films, even this Z-grade Kong film, I've just never really enjoyed them myself. As such, take everything I say after this with a grain of salt. 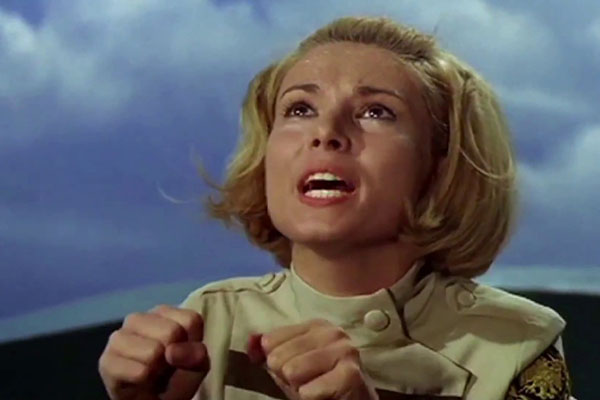 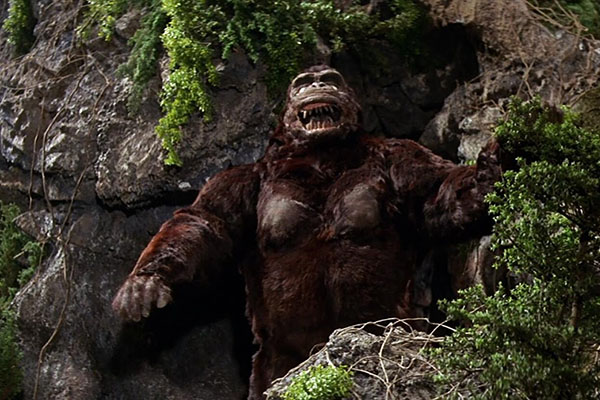 For starters, the plot is utterly stupid. In fairness to the production, this movie is based on an older, Rankin-Bass production, The King Kong Show, so elements of the movie such as Dr. Who (no relation) and the Mechani-Kong are taken directly from that series. Even bearing that in mind, building a robot Kong to dig out mysterious element only to them have to steal the real Kong, but then somehow you get the mechanical Kong working anyway (all so the two beasts can fight, of course) just doesn't work. At a certain point I had to shut my brain off because there was absolutely no reason to care about the story.

Fans of these films, of course, really only care about seeing the monsters battle it out, and a kaiju films lives or dies on how much action it has and how big that action gets. In that regard, this film sucks. There are really only two big set pieces -- one where Kong fights a couple of dinosaurs on his home island, and then the end section where Kong and Mechani-Kong battle it out for the fate of Tokyo (because it's always Tokyo). The rest of the time is spent not on the monsters but on the human characters, and that's a huge mistake.

For starters, the human characters just aren't interesting. The entire U.N. team that finds Kong and befriends him are as stock as a set of characters can be. Neither the commander nor the Lt. Commander have any kind of actual personality traits, while the nurse (who, frankly, should have been a doctor were it not for the fact that the film is misogynistic) just wails a bunch and is there to look pretty. The only character with any interesting personality is Dr. Who (no relation) who feels like he was ripped out a James BondThe world's most famous secret agent, James Bond has starred not only in dozens of books but also one of the most famous, and certainly the longest running, film franchises of all time. film... just not a very good one.

The other issue with this whole setup, though, is that it prioritizes the human character, who suck, over the monsters, who aren't great but are the actual draw of the film. It's like the more modern Godzilla films made by Universal, all the focus is on the humans when all we really want is to see monsters smash against each other for a couple of hours. The film barely delivers on that front and spends way too long on characters that don't matter to the audience. The film, in short, doesn't know what to give us when we want it. 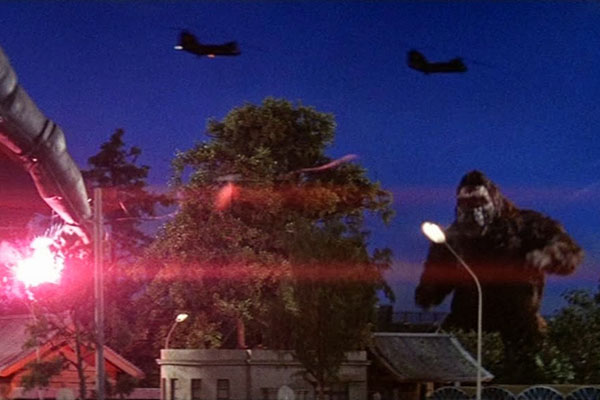 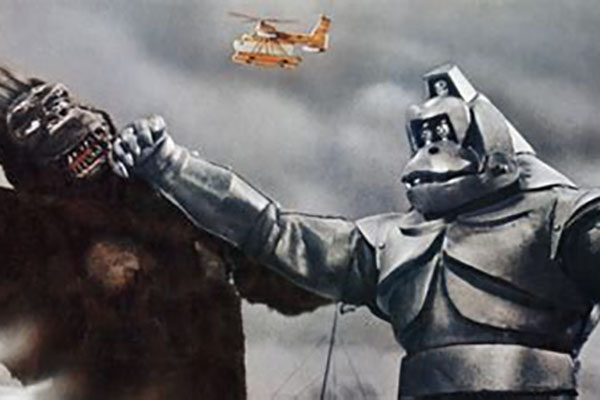 And let's address the fact that King Kong looks awful here. He's ugly, he's matter, and he has dead eyes. Like, literally, they're grayed over and gross, like they were ripped out of a corpse. Kong is an absolute mess here and I had a hard time rooting for him. The Mechani-Kong, by comparison, had clean lines and was actually quite stylish. This was a monster I liked seeing on screen and I kept hoping he's break his programming, turn on Dr. Who (no relation) and become the hero of the film. The movie didn't make me care about Kong so I went with the thing I liked looking at.

Thus, overall, this film is a failure. It's tedious, it's not fun, and the action barely registers. Frankly, it's one of the worst films I've seen from Toho. Admittedly, I haven't watched a lot of Toho monster films, but even I know this is a pretty low bar for the company. They were right not to make any more Kong films after this; here was a kaiju (or "kaiju") that just didn't suit their purposes, and this film clearly illustrates that.