Creepy and Kooky in Equal Measure

As a fan of the various Universal MonstersThis franchise, started off with Dracula and Frankenstein in 1931, was a powerhouse of horror cinema for close to two decades, with many of the creatures continuing on in one-off movies years later., I do find myself drawn to anything that plays around in that same aesthetic. If you go back through the history of the monsters and the various places they've shown up in media, you'll inevitably stumble on The Munsters, a TV show essentially about the Universal Monsters living the sitcom life (and that series was, in fact, produced by Universal, giving it some quite literal cred). Although The Munsters was the more successful show, I (in my watching when it was on Nick at Nite) much preferred The Addams Family, even if it wasn't as successful when it aired. 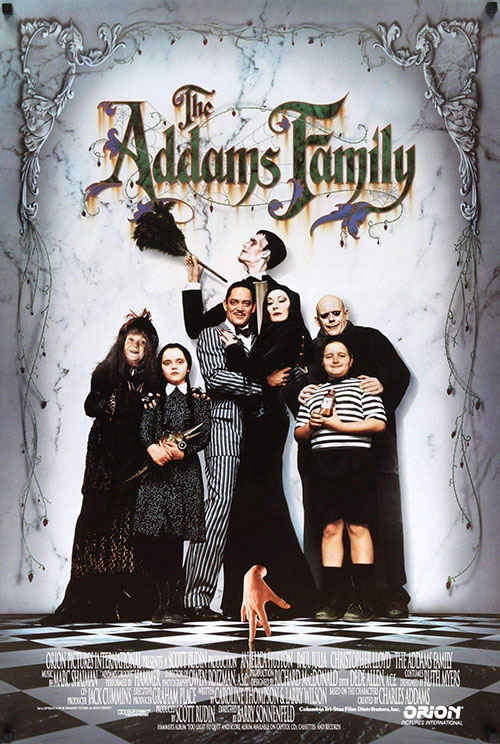 The thing about the Addamses (and this may be the reason why it wasn't as successful on TV) was that they were weirder, darker even. Where The Munsters was a dopey and broad comedy, there was always this little bit of a edge to the Addams clan. It was a tinge that made their humor a little blacker, which always struck a better chord with me. This thread, of course, comes from the original cartoons by Charles Addams, which were very much dark black comedy, and while the 1960s show sanded off some of the thorny edges for broad audiences, it still retained just a glint of that nasty spark, enough to keep people like me interested in that kooky family and their altogether ooky antics.

In 1991, long after not only the cancellation of their 1960s TV show but also the multiple revivals to follow, Paramount came along and produced one of the best adaptations of the classic kooky family (with maybe only the sequel besting it). It has everything -- the perfect cast, proper special effects, and all of that dark and twisted humor you'd expect from the family -- all to create a film that is still watchable even after all these years. Although Hollywood has tried, repeatedly, to tap into this family again, nothing that's come along has been as good as this 1991 film (and it's sequel). All of them lack that perfect spark.

Still despite this, Gomez isn't entirely happy. Years earlier his brother, Fester, went missing after the two of them had a fight. There was an argument about girls, and then Fester went off, on a boat, to explore the Bermuda Triangle and hadn't been seen in 25 years. However, Gomez's attorney, Tully Alford (Dan Hedaya), realizes that Gomez's grief is the proper way to leech money off the rich (and kooky) family. He realizes that the son, Gordon (Christopher Lloyd) of loan shark and grifter Abigail Craven (Elizabeth Wilson) is the spitting image of Fester and could be their way in to getting all the Addams's money. SO they introduce Gordon as the long lost Fester, and it's up to the grifters to make this work before the Addams Family realizes they've been conned. 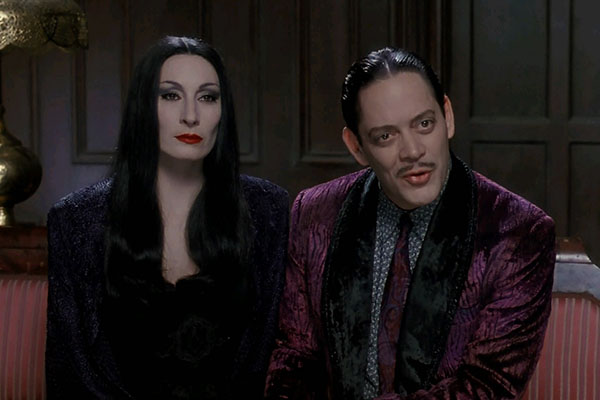 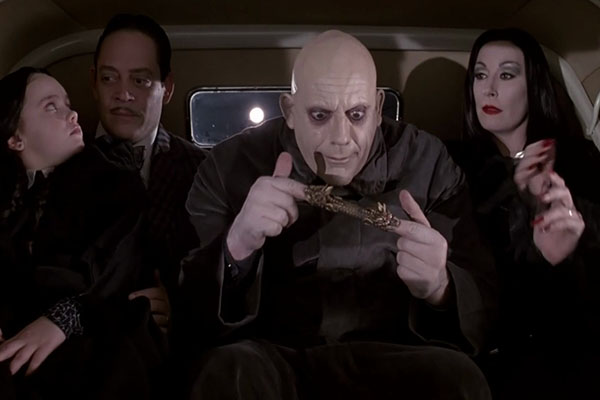 There are two sides to 1991's The Addams Family, and depending on which part appeals more to you will really determine how successful you think this film just might be. If you want to get invested in the story of fauz-Fester and his long con on the Addams Family, I have to admit this is honestly the weakest part of the film. It's the main plot, to be sure, but it's also the bit the film has to get through so it can get back to the good stuff: everything else in the film.

The movie is, frankly, at its best when it's just following the family around being weird and doing creepy things. There's a constant thread through the film, for example, of Pugsley and Wednesday trying to kill each other (in a good humored way, as they never actually accomplish the deed), and there's also the scary things Grandmama is always cooking (and catching). So many of the bits in and around the "plot" are fan and hilarious, relying not only on the outlandish scenarios but the reactions of the cast as they treat everything as if it was perfectly normal (like the gag about Uncle Knickknack).

Of course, all of that works because of that perfect cast. Julia's Gomez and Huston's Morticia have such fiery chemistry, delivering pitch-perfect romance and dark humor in equal measure and the two remain in love after over a decade together. Ricci's Wednesday is probably even better (which is why they gave her an even bigger role in the sequel), being this dark little girl with the single best, evil reaction shots of the cast. Sure, Pugsley doesn't get as much to do around her but he plays a perfect straight man, dead-panning plenty of reaction shots at what Wednesday says, as if to say, "damn, this girl is dark even for me."

If there is a weak link I would actually say it's Christopher Lloyd's Gordon. Lloyd often gets deeply invested in his roles, almost going method with his performances (an anecdote about his time on The Search for Spock, where his Klingon commander yells at the sky to summon a transporter beam, perfectly illustrates this). I just don't know what he was trying for with his faux-Fester as he's too goofy and deranged to be a good con man, but also too aloof and off-putting to even blend in with the Addams Family. He's a sour note for me, the one part of the film that still doesn't work for me after all this time. 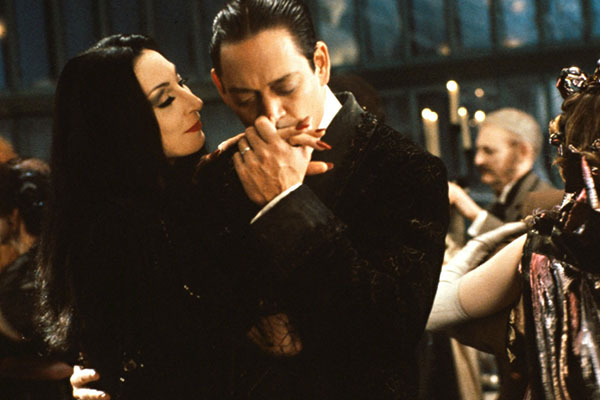 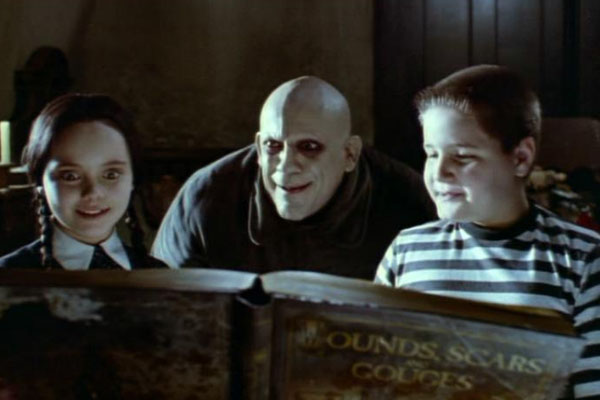 And yet I can't really hold that against the film as there's just so much other joyous (dark) material going on here. The film never lets itself settle into a groove, always coming up with some new, weird thing to do, some strange twist for the movie to illustrate. It's like a sketch comedy show stretched to feature length, but in this instance it works because there's simply so much material to mine for comedic effect with this family. The creators, Barry Sonnenfeld and Scott Rudin, wisely understand that the best way to craft a film about this family is just to let them wander and be weird, exploring every strange thing they can do but never condemning them for it.

Perhaps what I like best about The Addams Family, though, is the simple fact that the film never judges this clan. Although they are made up of some of the most macabre members of society, they're also the heroes of the tale; it's the normal looking people that are evil and conniving. You don't even need the evil people around them to act as a contrast as this is a loving and caring family that communicates, that elevates each other, and appreciates everything they each contribute. It's a family movie where the family in question live their darkest, best selves which makes you think, "maybe we'd all be better if we just let ourselves be whoever we wanted to be."

This film really is great and whatever small issues I have with it don't ruin the film for me. It might not be perfect in all respects, but this film is still infinitely watchable, never getting old even after all this time.