We talked yesterday about the 1991 Addams Family reboot. It wasn't the first reboot of the franchise after the 1960s TV show as there had been a little-loved cartoon that had come out in the 1970s. Still, it was the first (and so far only) production to rival the original TV show in the hearts of fans (with the less said about Addams Family Reunion and the live-action TV show to come after, the better). It grabbed the attention of the public and became a pretty solid hit for production studio Paramount. 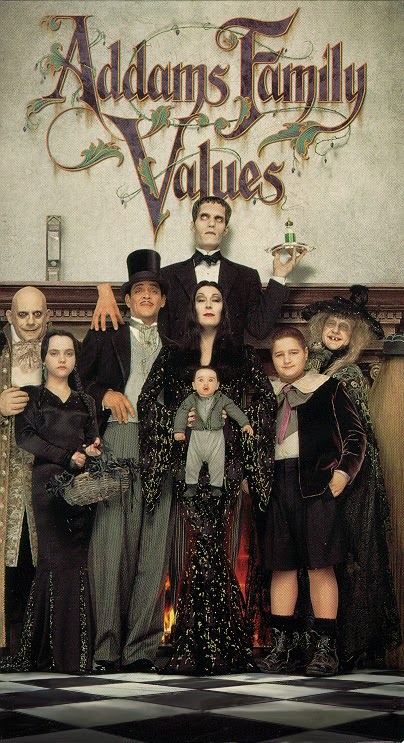 Two years later, the creepy and kooky family was back in a direct sequel. All of the original cast from the first film was back (save Carol Kane replacing Judith Malina as Grandmama for reasons I can't find Online), and the goal was, clearly, to make a sequel that was bigger in every way. This involved more for each of the characters to do, as well as a large emphasis on each member of the family (save maybe poor Workman's Pugsley who still ended up second-banana to Ricci's Wednesday). And, best of all, it doubled-down on the dark and macabre humor that worked so well in the first film. While I'm still on the fence about if it's better than the original film, it is a very worthy sequel that, at times, manages to surpass the original in the comedy department.

It's been a few months since the original film and Morticia, as promised at the end of that first movie, is giving birth. The family flies to the hospital where, after a very brief bit of labor, the family welcomes its newest member to the clan: little baby Pubert (that name is so good and disgusting). The little devil is a bundle of joy (in the Addams's own way), but there's just one little problem: the baby is hated by both Wednesday and Pugsley; they keep trying to kill the infant, but somehow always manage to miss. This is when Gomez and Morticia decide they need a little help around the house as raising three kids is a lot, so they go looking for a nanny.

After the first few nannies fail to work out (because Wednesday is a delightful terror), along comes the perfect caretaker: Debbie Jellinsky (Joan Cusack); she's not weirded out by the clan and seems to think all of their oddities are just delightful quirks. Even better, though, she has a certain eye for the awkward older brother of the clan, Fester. Although Fester can't seem to figure out how to woo the woman, she still gives in to his "charms" and the two fall in love. Except, not really, as its very quickly revealed that Debbie is actually a black widow, a murderess who stalks rich, single men, marries them, and kills them, all so she can steal their money. The kids are the first to catch on to Debbie's scheme, so she finds a way to get them sent to summer camp. This provides all the opportunity to woo Fester under the oblivious eyes of his family. It's just a matter of if she can finish the deed and actually kill Fester before the luck of the family strikes back.

Credit due to the film, this isn't the same exact story as the first movie. Yes, it is still all about Fester in a way, but there are only so many characters in the series and there's no way Gomez and Morticia could ever have problems; as the film points out time and again, they are absolutely devoted to each other. Fester is pretty well the only adult of any prominence in the series that could have a character arc, so he's the natural fit for a leading character here. He's still not a great character -- Fester really is an awkward fit for the rest of this weird family, even now in the second movie -- but it works better this time around than the "faux Fester" plot we had in the first movie. 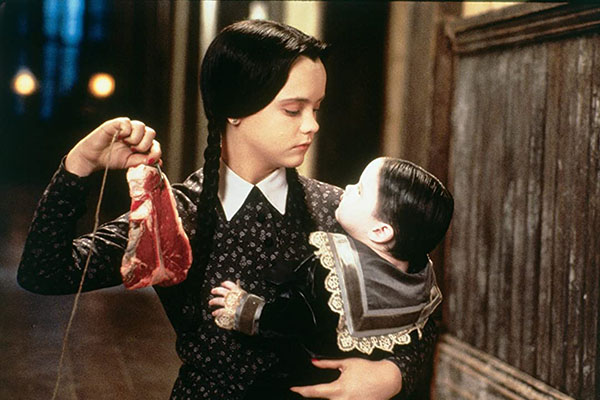 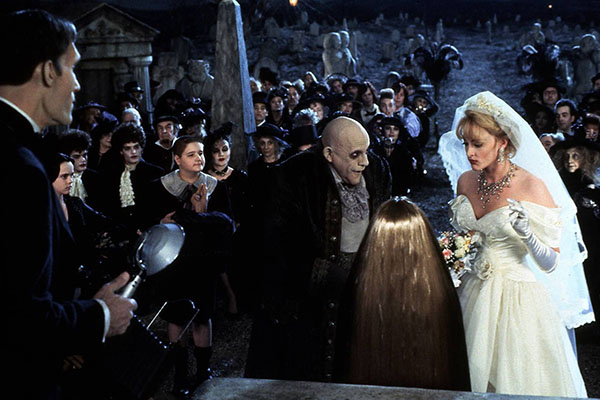 That said, Cusack is an inspired casting choice for the role of the murderous nanny, Debbie. I don't recall ever seeing Cusack play a villain before... in fact, most of the time I remember her working as a second-banana character to her brother John's films. She clearly had a ball getting to stretch her acting and play someone outside her normal set of characters as Debbie is absolutely fantastic here. She's everything Fester isn't: charismatic, vivacious, and absolutely evil in the best possible ways. The Fester love story plot line works as well as it does because Cusack is there to carry it all.

It's interesting, in fact, as I was reading reviewers that pointed out something about her character: she's been searching her whole life for fulfillment and she stumbles into the perfect family for her but she just can't realize it. She's a stone cold evil bitch but the fact remains (as Morticia points out more than once) everything she does to Fester and the rest of the family are things they can actually respect. If she could have taken a beat and looked around she just might have realized she'd found an actual proper home. But then, deep down, Debbie was probably a little too evil for the rest of the clan (who are, by and large, good-natured dark souls).

While Debbie is the shinning light on the A-plot, it's really the B-plot that steals the show. Wednesday and Pugsley at camp is a perfect storyline not because it gives these characters any growth. Far from it, in fact. No, it serves as a vehicle for Ricci to let her nasty little Wednesday character steal every single scene she's in. There isn't a line that goes by where she doesn't have a dark quip to throw out, some snide comment to show just how much she's above everything around her. In a normal movie the outsiders would learn that they could be a part of a larger community if they just let them in, but this camp is awful and Wednesday and Pugsley aren't joiners, and the film realizes that. Camp doesn't lead to caring and sharing but, instead, to Wednesday showing everyone she's the next queen bitch.

But, really, this film, like the first one, is at its best when its just going from one skit to the next, acting as a conveyor belt of jokes. Like the first one, this movie feels more like a collection of scenes than a real movie with dramatic stakes. That, of course, speaks to the nature of the Addams Family, originating as cartoons, and the movie never forces them to lose that. If anything, now that all the character introductions from the first film are out of the way, the movie can really let loose and just focus on giving us more jokes, more macabre scenes, and more dark humor. The film delivers on all of that, and then some. 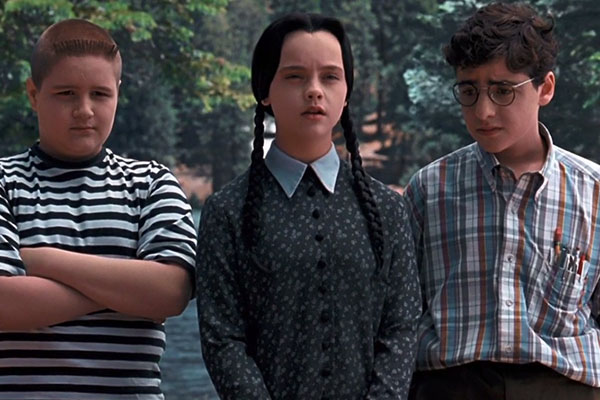 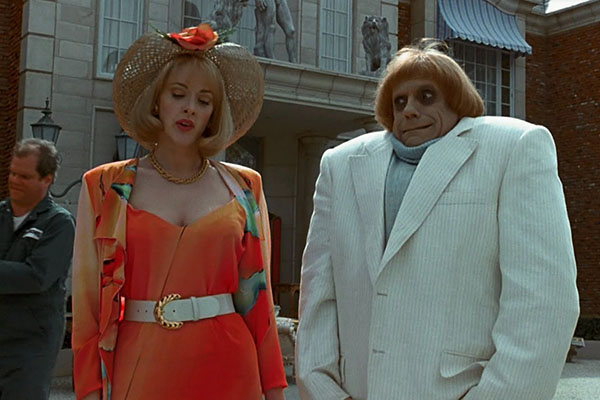 It's because of the summer camp scenes, more than anything, that I think this film is actually funnier than the first. It has its nasty little streak, and then some, and it really just revels in being able to cram as many jokes as possible into its 90 minute runtime. Whether its better than the first film, or not, is really up to the viewer. The first film certainly had bigger stakes but that plot line was also more of a dud where this film has a much better villain even if, in the process, the film loses even more connection to a true reality. They both have their merits which, for me, puts them about equal to each other.

Sadly, though, we would never get any further adventures with this version of the family. Although the original film was a hit, this movie was more of a break even for the studio (despite actually getting better reviews than the first film). Then, within a year of this movie's release, Raul Julia died and we lost the perfect Gomez Addams. It would have been hard for the producers to make a third movie, even if the studio wanted, because Julia's Gomez was such a perfect part of the films; recasting him would have felt wrong. Although further movies were made, they had largely new actors in the roles and they were made-for-TV affairs that, everyone agrees, existed in their own continuity.

There were rumors at one point of a continuation that would have seen Wednesday as the new matriarch of the family with a new set of kids (with, potentially, a returning Anjelica Huston as Grandmama Morticia), but that seems to have been scrapped in favor of a Wednesday show directed by Tim Burton that sees the character sent to a boarding school, far away from her family. I fail to see the point. Alas, these two movies, then, are the perfect distillation of Charles Addams freaky family and I, for one, am glad we have them. They're still compulsively watchable all these years later, a perfect little pair of dark humor comedies fit for any occasion.