How to Destroy a Franchise

It's hard to know if the producers behind 1982's Conan the Barbarian expected that film to be a hit. They had a relatively unproven star -- Arnold Schwarzenegger having only starred in random Hercules films and documentaries about body-building before this and still two years out from his most famous role in the TerminatorIs it a series about a future nuclear war and the survivors of the aftermath? Is it a series of chase movies set in the present day? Is it a series about time travel? That fact is that the Terminator series is all of those concepts. The mash-up of genres and ideas shouldn't work, but the films have proven adept at mixing into a heady series unlike any other. -- with material that didn't feel like it would be successful. The closest parallel to the Conan the Barbarian cycle in film were those old Hercules productions, and by the 1980s the popularity of those had fallen off a lot. 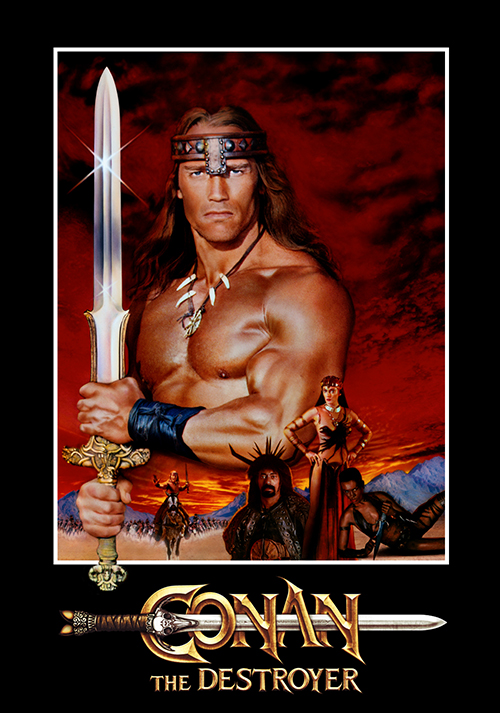 Netting close to $80 Mil at the Box Office, from a $20 Million budget, the first Conan film with Arnold was a success by 1980s metrics. Of course, back in that time period, when you had a success that warranted a sequel, the important thing was to cut the budget back some and make a sequel that could milk just a little more money out the viewing audiences. That's not how things are done now, of course, as sequels are big business and the budgets for follow-up films balloon bigger and bigger. Sequels weren't expected to make more money than the original, so common sense in this older era was to pare everything back and see what audiences would tolerate.

To put it bluntly, audiences didn't really tolerate what sequel Conan the Destroyer was selling. But then, the film really isn't all that great; it's bloated, it's overly long (even at a slimmer 101 minutes), and it lacks any of the style and charms of the original film. Plus, despite having an entirely new plot and largely new cast of characters (Arnold's Conan and Mako's wizard Akiro the exceptions), the film feels like a tired rehash of the previous film. It was, in short, a bad product shoved out into theaters before audiences forgot all about Conan and his barbarian ways.

In the film, we catch up with Conan and new accomplice Malak (Tracey Walter, who takes on the comedy relief job no one wanted or needed in this picture) as they're roped in (literally) by Queen Taramis (Sarah Douglas) to aid in a quest. Their job is to usher the virginal Princess Jehnna (Olivia d'Abo) to a wizard's tower, kill the wizard, and then use jewel stashed there to open another temple and gain a mystical horn at that temple for some rite or whatever. Do this and the Queen (who apparently has magical powers) will bring back Conan's lost love Valeria. Conan, of course, readily jumps at the chance.

Only, of course, there's a catch: the Queen has no intention of paying Conan for his services (either because she can't bring back Valeria or simply won't). Jehnna's bodyguard, Bombaata (Wilt Chamberlain), is under strict orders to kill Conan the second the prize is found. That, and he's to keep Jehnna separate from Conan so that she doesn't get ideas and lose her "virgin" status. If she becomes impure she won't be usable for the ceremony where, surprise surprise, she's to be sacrificed (naturally, Jehnna has no knowledge of this twist). It'll all come down to Conan and his allies to save Jehnna, kill the Queen, and stop the ceremony before whatever evil they plan to unleash can be awoken. 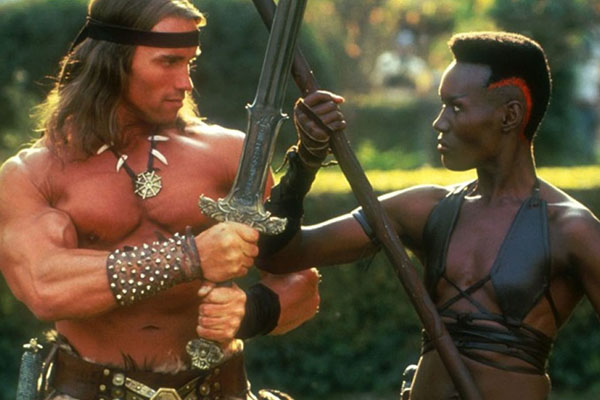 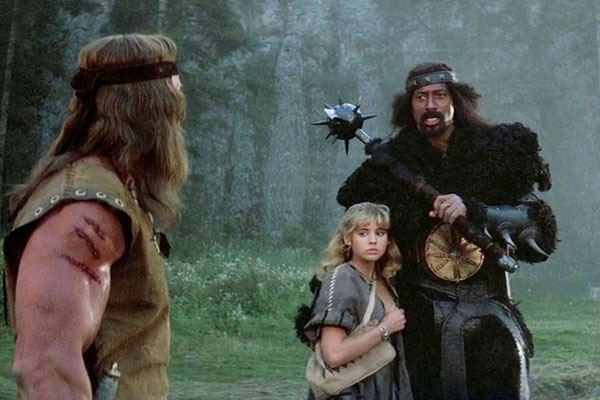 In credit to the film, this story is at least different from the first movie... to an extent. It's still a fetch quest, but then so many quests in these kinds of pictures are, but at least we're not going to another evil temple to defeat another animal-worshiping cult and saving the life of a kidnapped damsel in the process (the kidnapped damsel comes later, at a minimum). We have different story beats, and a different plot for the film, so there are some (minimal) surprises that keep the film in some context interesting.

Not interesting enough, though. Part of the problem is that there's no twist to the movie. Even if we could have figured out on our own that the Queen was evil (she dresses all in black and, in every scene she's in, screams "I'm an evil witch, ask me how" just by her very demeanor) the movie spoils that "twist" within the first ten minutes as we witness her telling the bodyguard that he's to kill Conan as soon as the quest is complete. Had the film held this back there might have been some intrigue, we might have been caught at least a little off-guard when the betrayal happens. But no, it's all spoiled well in advance which ruins that part of the story.

I suppose it could have worked if, at every step, Conan was presented by characters protecting the various relics who were actually good people. If the relics are used, an evil god will be summoned, so in theory would could have had Conan slowly realizing he's working for the bad guys. That could have been an intriguing premise, but every character he encounters along the path are just as evil as the Queen. No one here is a good person so any morality potential is thrown out the window as well. This is just a generic quest where the good guy is the already morally grey Barbarian. Hard to really care about that at all, when you think about it.

All of that taken into account, the film has to do a lot to earn any good will from audiences, but all other facets of the film are as poorly thought out as the story. The action this time around is terrible, and when the whole point of these movies is to see the great action, with Conan slicing guys down left and right, that's a total missed opportunity. I think a big part of the problem is that none of the people in the film are action stars; we have comedian Walter, basketball player Chamberlain, model and single Grace Jones (as another warrior, Zula, who Conan picks up along the way) and a lot of other stars hired for anything other than their action chops. 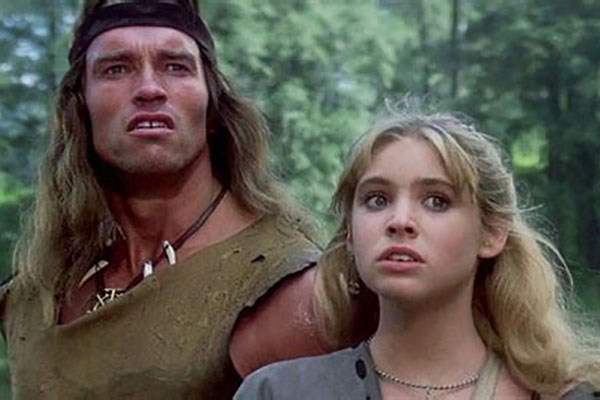 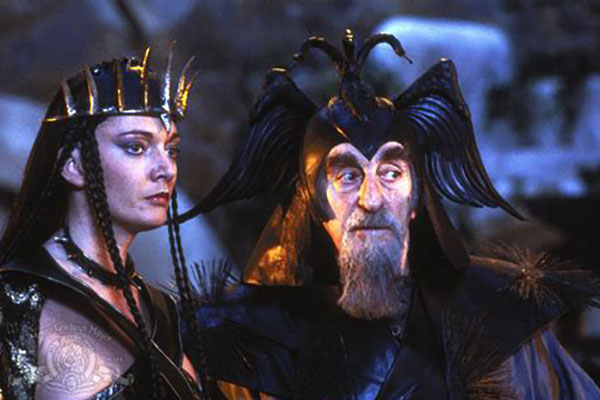 Arnold is the one action guy in the film, so to cover for the fact that no one else really knows how to fight the movie tries to hide just how bad the action is. Everything is film from multiple angles, with a ton of cuts in between. Often we get a stab from the character directly at the screen as if to simulate a personal view of the killing, but we hardly ever see to character actually battle each other. It's all so pathetic looking you never get into the fighting which, again, is the primary reason to come see an action film.

Beyond that, the film also feels cheap. Where the original movie made a lot of hay out of its $20 Mil budget, this film looks shoddy for $2 Mil less. It's hard to say how much of the budget went towards the salaries for all these non-action stars, but hardly any of it can be seen on screen. Where the first film made good use out of complex sets and solid practical effects, this film looks like it was shot on a few sound stages and the couple of monsters we see look like rejects from a 1950s low-budget production. The first film, much as it had flaws, was everything this movie is not.

And, to cap it all off, the soundtrack just retreads all the good music from the first film without adding anything new to the mix. Worse, it uses the tracks in scenes that are incongruous to the feel of the score. Songs meant to project a bacchanal celebration are used for the climactic dark ceremony, while other songs are put over action sequences or long stretches of riding. Time and again, though, none of these tracks work in context to where they're placed. They're used simply because the production already had the tracks and didn't want to pay for new songs.

Nothing about this film works. What was supposed to clearly be a series extension that would lead to further adventures (with the film ending on the same scene from the first movie, Conan sitting on his throne, with end title leading us to know another movie was on the way) ended up being the blow that killed the franchise. The stewards of this adventure didn't care enough to put together a good film, instead cheaping out to scrape by with a few extra bucks, and Conan's adventures died here for close to two decades. It's a sad and pathetic end to a stumbling franchise.