Why Did It Have to Be Snakes?

When he first broke into films, Arnold Schwarzenegger was a force of nature. When you watched him it was like seeing a living special effect. You believed he was a, unkillable robot sent from the future in TerminatorIs it a series about a future nuclear war and the survivors of the aftermath? Is it a series of chase movies set in the present day? Is it a series about time travel? That fact is that the Terminator series is all of those concepts. The mash-up of genres and ideas shouldn't work, but the films have proven adept at mixing into a heady series unlike any other. even before he had to cut open his face to reveal the metal skeleton underneath, and that was because Arnie seemed otherworldly. That same amazing force was in another of his early films, the Conan adaptation Conan the Barbarian and that's because few actors were as big, as ripped, as the Governator. 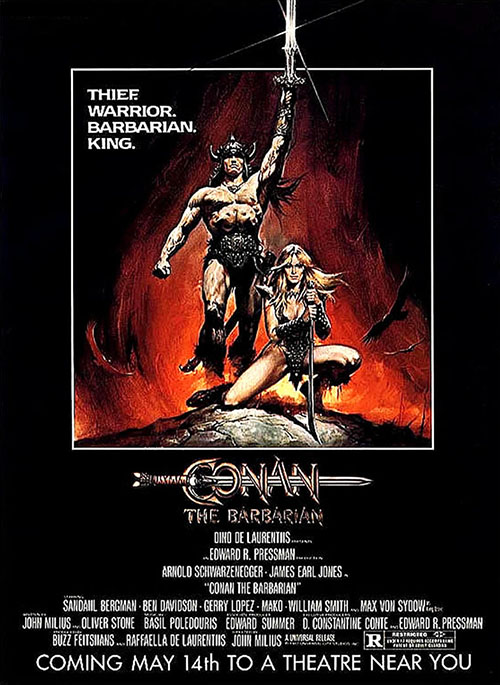 It's easy to see why the 1982 Conan became a modest hit: it has Schwarzenegger and, very quickly, Arnie became big business. There was a stretch of films there from 1982 to 1991, where every film he was in was bank at the Box Office, and it kicked off here when Arnie picked up a giant sword and hefted it as only a massive barbarian could. The term "barbarian" would seem offensive but you see Arnie in this film and watch him wear the role with pride, and you buy it. Again, he's a living special effect and this film works entirely because of its star.

I gotta tell you, it's a good thing Arnie is in this because it was be an overlong chore otherwise. Clocking it at well over two hours, this film just goes on and on, dragging in places and taking its sweet time to even get to the main thrust of the story. This film could have easily been broken up into two parts, with more adventure sprinkled in to keep the audience interested, but instead it's one long, often slow, film that perks up with it lets its star hack and slash their way through some pretty good action sequences. This film sings when it's an action movie, but it spends a lot of time not being an action film, and that's when the film really starts to suck.

We starts off with Conan at a very early age. We watch as the lad's entire village is slaughtered by the army of Thulsa Doom (James Earl Jones), a sadistic warlord with dreams of taking over the world. He kills everyone in the town, including Conan's mother, but spares the children, selling all of them into slavery. As he works, Conan grows and puts on muscles until he comes out as Arnold Schwarzenegger. His captors then sell him into the slave pits where he'd fight for his life every night as a warrior. He excels at this too, to the point where he eventually gains enough freedom to escape and become a warrior for hire.

Joining up with fellow warriors Subotai (Gerry Lopez) and Valeria (Sandahl Bergman), the three knock off a temple loaded with riches. They make off with a lot of lute, but gain the ire of a snake-worshiping cult led by, of all people, Thulsa Doom. When the king of the realm enlists Conan and his gang to go to Thulsa's main temple and kidnap back a daughter that ran off to the cult, it puts our heroes on a collision course with Thulsa and his cult, the fate of the steppe hanging in the balance. 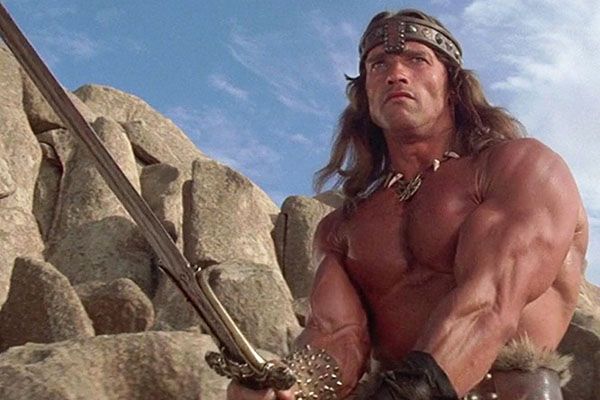 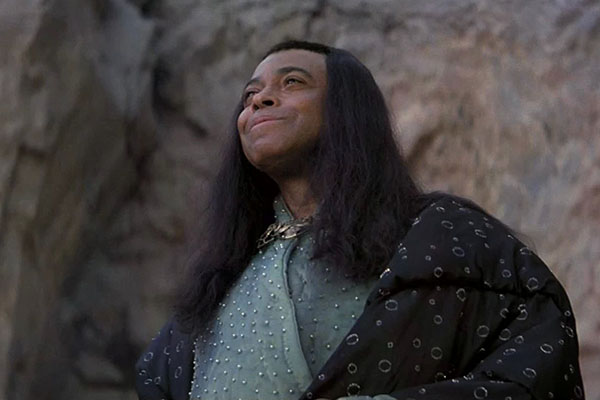 The film, to be blunt, really takes far too long to get going. The entire opening act, where we watch Conan's village get slaughtered, where we see him grow up, become a fighter, escape, wander around, meet a succubus, have sex, kill the succubus, meet his fellow warriors and, well, on and on, just drags by. There's some good story ideas here but much of it could have been condensed into a few lines of dialogue thrown in as the movie careened forwards. Put it all at the front of the movie drags the momentum down.

Not that the film doesn't do plenty to lose momentum as it goes along. There are plenty of tracking shots that just slow pan as Conan rides his horse across the steppes, and plenty more long establishing shots that suck all the momentum out of scenes. Between the intro of the film and all these long background shots, there's easily 30 minutes of more that could be condensed or excised from this film, which would help the pace of it all out immensely. I wish they had because, wow, there were stretches where I had to fight to stay focused on the film.

The movie does pick up past the mid point, once Conan gets to the snake cult and the movie's plot focuses in on our hero against Thulsa Doom. There are solid action sequences here -- a temple raid to kidnap the girl, the big fight near the end of the film -- that work really well. The setup for these scenes is great, and there's a killer soundtrack that backs these sequences and lends them an energy other parts of the film are missing. When this action film decides to be an action film, it's absolutely awesome.

It helps that there's solid actors in this bunch, of course. Arnie easily shows off his charisma here, playing all facets of his personality wonderfully as Conan. Balancing that out is Jones as Doom, and he delivers a delightful, scenery-chewing performance. Any time these two actors get to play off each other, the movie is fabulous. These two make their shared scenes together work so well and you end up wishing there was more between them so that the rest of the film could have had this level of charisma behind it. 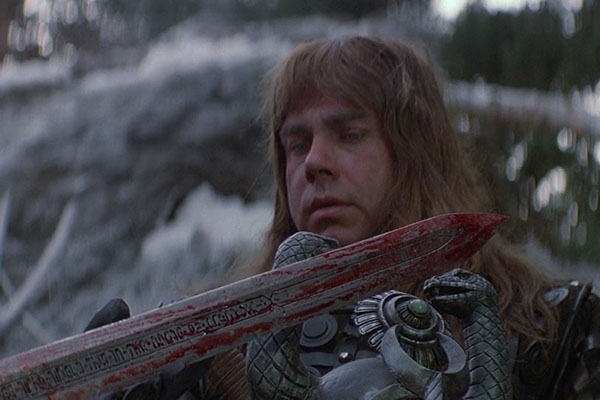 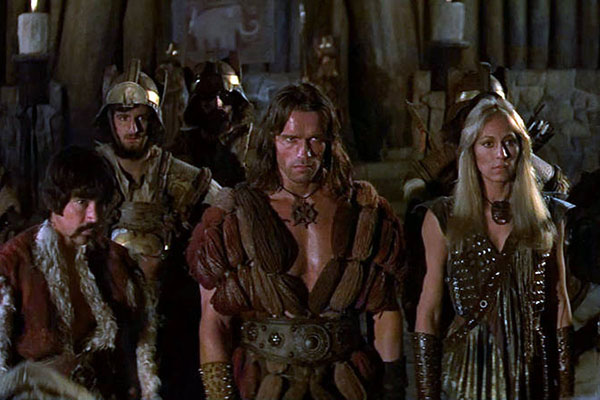 And let's not undersell the special effects in the film either. Everything in the movie was done with practical effects, of course, as it was made in the 1980s. There are some props they use, though, that look so good, from a massive snaked early in the film that you'd swear was real, to a late sequence where Jones's character somehow turns into a snake (and the in between moments, where the character is both Jones and Snake look impeccable). There's solid visual design here and the people working behind the scenes did such a good job.

I simply wish more of the movie was as good as these later scenes. It's such a slog getting into the film that I could absolutely see plenty of people in the audience tuning out and watching something else. When the film clicks together it so good, but those moments aren't enough to recommend this film. Arnold is in better film, and there's even a better version of Conan that we'll get to soon enough. For all the good sequences in this film, 1982's Conan the Barbarian is a hard pass.