The Villain is the Heroine of Her Own Story

I think we can all admit that the thought of Disney live-action remakes leads one to imagine that the House of Mouse has run out of ideas, crassly cashing in on beloved old properties instead of trying to make new ones. They do make new ones, like the beloved Frozen, but they also make crass, commercial films as well -- they can do both things! -- and many of the live-action films feels very crass and horribly corporate. But not all the time. 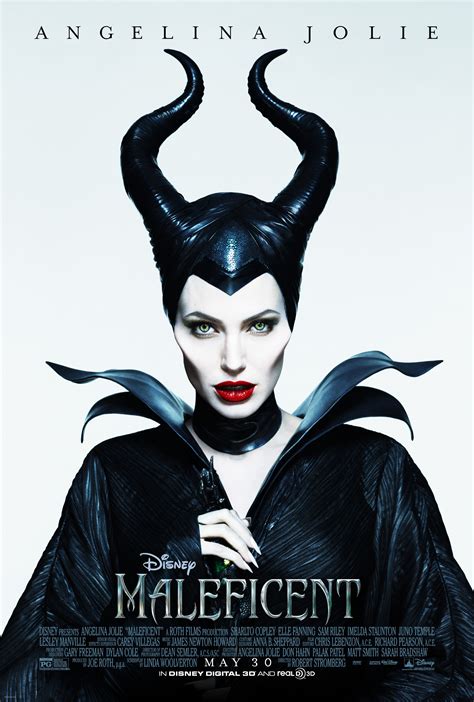 Sleeping Beauty was Disney's 16th animated film, and their third movie in what would eventually come to be known as the "Disney PrincessesReleased in 1937, Disney's Snow White was a gamble for the company: the first fully-animated, feature-length film ever created. It's success lead to the eventual creation of the Disney Princess franchise, which has spawned 13 main-line films and multiple spin-off movies and shows. line". It's also a horribly slight film, clocking in at a svelte 75 minutes. It's certainly not one that fans talking about in the same breath as other works from Disney Animation or the Princesses, and up until 2014, Sleeping Beauty had garnered no sequels or related films. Compare that to Cinderella with its two direct-to-video sequels, or the same for Aladdin and Beauty and the Beast. Only Snow White was left as untouched as Aurora's tale.

That changed with the release of Maleficent, a live-action retelling of Disney's Sleeping Beauty -- and very definitely Disney's version of it as it stick pretty closely to the style and events of that animated film. The trick is, though, that where other live-action adaptations of the Disney canon have hewed pretty closely to the source films, Maleficent trod its own path. It looked at the original film and decided it could add more to the movie, taking the delightful sorceress and giving her a story to befit her style and substance. Sleeping Beauty is Aurora's story, but Maleficent focuses squarely on the real power in the room.

In fairness, it had to as there isn't a lot of story in the original film. Maleficent hated the kingdom, crashes the presentation of the newly born princess, and curses her to prick her finger on a spinning wheel on the day of her sixteenth birthday, doomed to fall asleep for all of eternity. The king bustles Aurora away so she can be raised by three fairies (as her aunties), and then, like clockwork, the curse kicks in and, sure enough, Aurora is drawn to the cursed wheel like a fly to honey. The kingdom, along with the princess, falls into eternal slumber, and it's only after Princes Charming shows up (and defeats Maleficent, who took the form of a dragon) that the Princess awakens from "true love's first kiss." Big standard princess stuff, really.

All of those elements are here in this film too, but the important bits from from Maleficent. We're given her back-story, where, as one of the fae herself, she became the protector of the fairyland, the Moors, at an early age. A young boy, Stefan, comes into the Moors and over time, Maleficent and Stefan become friends. His father, the king, hates the fae folk and, eventually, the king tries to start a war with the Moors. A grown up Maleficent (now played fabulously by Angelina Jolie) defends her lands and sends the king packing. On his deathbed he swears to give his crown to whatever son kills the fae queen, and it's Stefan that sneaks into the Moors, talks to his friend, drugs her, and (when he can't kill her) cuts off her wings and takes them back to the king as "proof" of the "deed". The king dies, Stefan is made king, and Maleficent is left horribly marred and set on a quest for revenge. 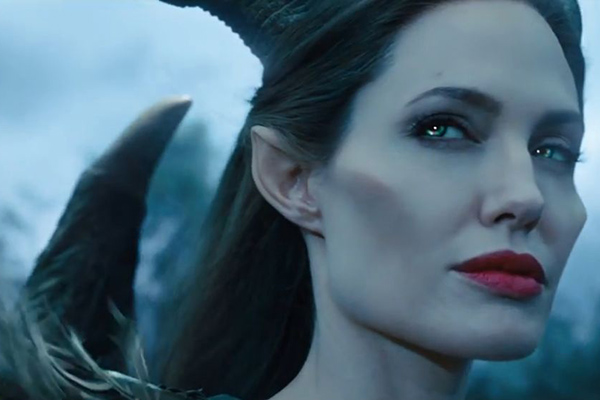 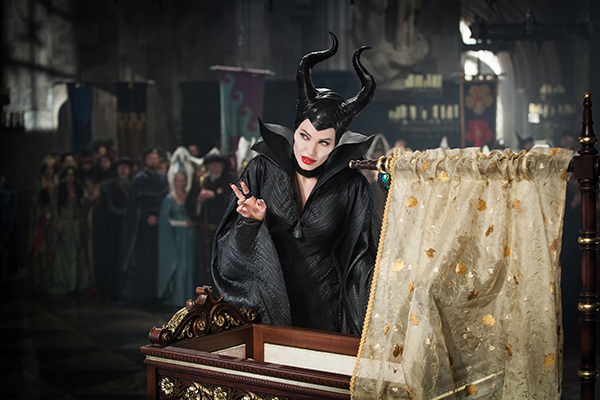 The rest of the movie follows the broad strokes of the original film from here, but at each turn its told from Maleficent's perspective, and that's the fun twist of things. We see she's not a bad person, just wronged by the world. Yes, she does curse the young babe, but as she watches over the lass, actually protecting her as she grows (because what's the point of a curse if the child dies before the revenge can be properly enacted) she comes to know the child and, eventually, care for her. This is then brought to a head when teenage Aurora (played by Elle Fanning) confront Maleficent, saying she's always known the fae queen was there, and declares that the sorceress is her "fairy godmother" which, actually, yes, in a manner of speaking.

I rather enjoyed this interplay between the original tale and the story from the villain's perspective. The slightness of the original tale is actually of benefit here as the movie can hit all the beats and recognizable scenes from that film (more or less) as it glides past them on a tale of woe, revenge, and redemption. Of all the characters in the film, Maleficent has the biggest arc, from trusting girl to hurt teen, bitter ex, tender (god)mother, and fierce protector. She loses her ability to trust, and then regains it (and a part of herself) all because of the curse she placed, and the film tells this story against a recontextualized version of the original film. It works so damn well.

Naturally, the real power of the film is entirely Angelina Jolie. She vamps up a storm in this movie, turning out great scenes of action, love, loss, pain, and anger, all while covered in a fair bit of makeup and with two horns coming off her head. Jolie is a stylish actress and she clearly reveled in playing the heavy in this film, but the movie smartly also plays to her strengths, letting her play the beautiful creature (as all fae are) alongside unleashing her darkness that's always clearly been a part of her performances. This is perfect casting for the lead role and Jolie carries the entirety of the film.

That's good because the rest of the film around her isn't nearly up to her power. The animated style of the original work doesn't translate entirely well to this live-action story, especially when it comes to the fae folk (and certainly when it comes to the miniature forms of Aurora's three "aunties"). The CGI special effects don't look that great, weirdly plasticy and entirely fake, and anytime these effects are on screen, usually because we've cut away from Maleficent, the film suffers. 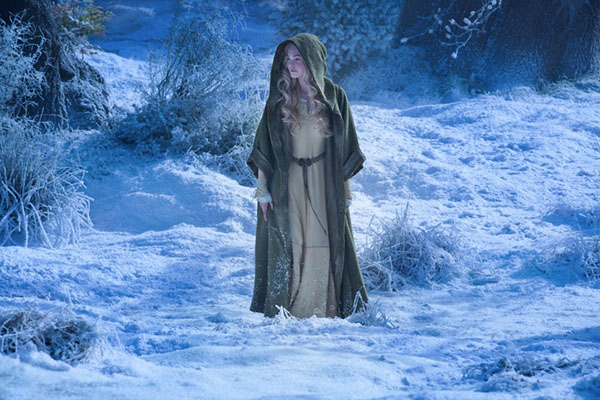 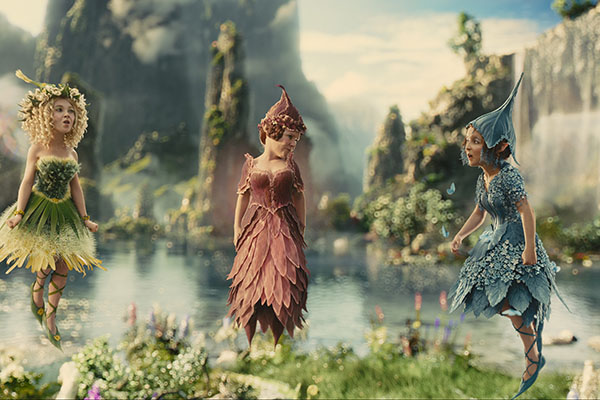 The film also staggers when we focus on the actual villain of the film, Sharlto Copley's King Stefan. While you hate him for what he does to Maleficent early on, you at least understand his motivation; it's a shitty thing to do, but it does add shading to his villainous role. Unfortunately, after these early events, Stefan ends up receding to the background, playing the nominal role of villain simply by grace of the fact that he wanted to kill Maleficent (and break the curse, if possible). This would work, and would again add depth to the story, if Stefan appeared more. But he goes from King to wild-eyed weirdo in the span of three scenes, and any nuance or shading for the part is lost. He dies, as he has to in one of these films, but a proper counter-point to Maleficent is his not.

Thankfully the film is really the "Angelina Jolie Presents the Angelina Jolie Show" and Jolie is in the film a good 95 percent of the time. She commands the screen, and drags the film behind her, and it so often works well because of her. On repeated viewings the film doesn't hold up as well, largely because you already know the twists the film will take as it riffs on the original Sleeping Beauty, but Jolie's performance never tires (which was the main reasoning behind its sequel coming to life I'm sure). In comparison to the original animated film, I like this movie so much more.

If I have any real qualm it's to do with what this film caused in its wake. The film made gangbusters at the Box Office, raking in $750 Mil on less than a third of that in budget, which in turn caused Disney to think about making many more live-action adaptations. The thing they misses was that this film was a creative reinvention instead of a slavish remake, as so many other live-action reworks have been since, and the charm of this film is lost in those other flicks. Disney is only now trying to find a way to take the story from the villain's perspective again, with the upcoming Cruella, but even then I have to wonder if they can really play that trick twice. Maleficent is the best live-action remake Disney has done yet, but I think it stands better when it stands alone.