I've never seen the original animated Mulan. Although I grew up in the era of the "Disney Renaissance", when all their biggest and most famous animated features of recent memory came out, Mulan came out at the tail end of the time where my family could drag me to theaters for these films. I have never been a big fan of musicals, and every animated Disney film of that era was a musical. So I ditched it and never found myself going out of my way to watch it. 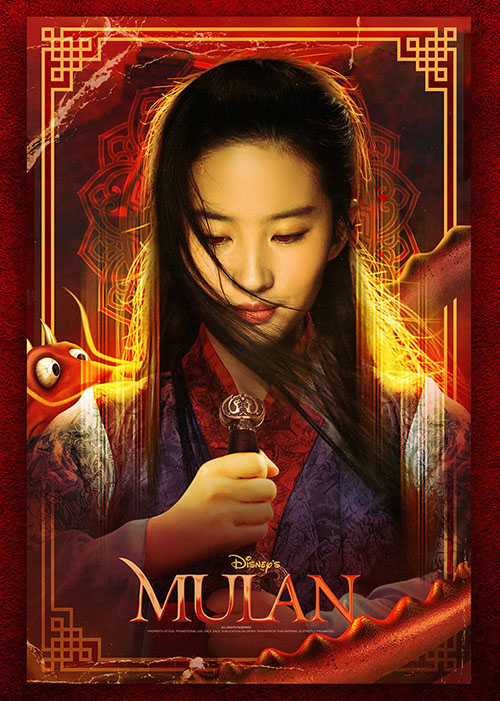 That did put me in an intriguing position for the remake Disney released last year. Although I often like to catch up on films before I see a new entry, I'd somehow managed to avoid seeing a movie plenty of people hailed as one of Disney's better entries in their canon (maybe not a masterpiece like the original The Lion King or Aladdin, but still apparently enjoyable) which meant that, in this instance, I could go in cold; it's like someone that's never seen Star WarsThe modern blockbuster: it's a concept so commonplace now we don't even think about the fact that before the end of the 1970s, this kind of movie -- huge spectacles, big action, massive budgets -- wasn't really made. That all changed, though, with Star Wars, a series of films that were big on spectacle (and even bigger on profits). A hero's journey set against a sci-fi backdrop, nothing like this series had ever really been done before, and then Hollywood was never the same. finally joining the fold (and yes, those people do exist). I could be like them!

Early glimpses of the film did have my intrigued. The movie looked like a blend of the original Disney story (what little I knew of it) along with Hong Kong wuxia-style action. I'm a fan of that filming style which can, when done right, produce sweeping, beautifully choreographed movies with kick-ass action. (Need I mention Crouching Tiger, Hidden Dragon?) The thought that this film could produce a mythic action film on the template of Disney's original film certainly brought me to the table. Sadly, the resulting film nowhere near reaches those lofty expectations.

The film starts pretty rough, with young Mulan (first played by Crystal Rao) running through her home village, chasing a run away chicken. She causes damage, scales buildings, and eventually has to save her own skin after falling off a roof by jabbing a spear between two slats of a building and perfectly balancing on it (this sequence looks awful, by the way). Her father, Hua Zhou (Tzi Ma), doting as he is, finally agrees with her mother, Li (Rosalind Chao), that Mulan has to settle down. She's not a boy so her calling isn't to run around and be a warrior but to be a nice, quiet girl and get married. That's where her duty lies.

Mulan (now played as an adult by (Yifei Liu) grows up knowing she can do great things but also realizing that, as a woman, she has to settle down. But when war comes to China, lead by evil warrior Bori Khan (Jason Scott Lee) and his sorceress Xianniang (Gong Li), the Emperor decrees that each family in the country must send one male to fight in the war. Her father, being quite weak, would die if he were sent to battle, so Mulan steals his armor and sword, pretended to be the son of the family, "Hua Jun", and joins the army in her father's place. But to be the true warrior China needs, and to stop the invaders that are coming, Mulan will have to reveal her true self, despite the potential consequences, and tap into her power the right way. 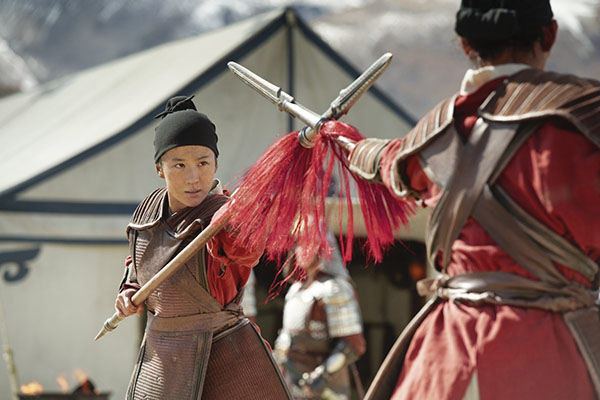 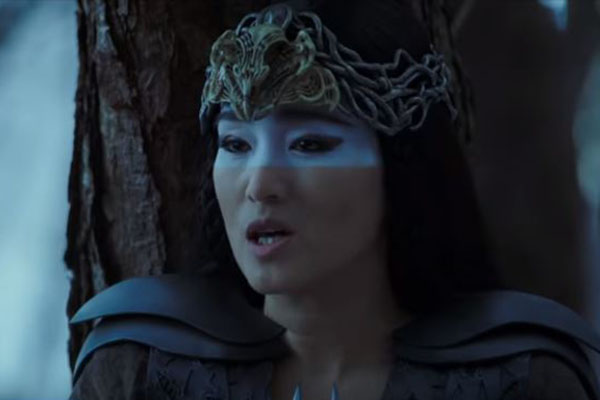 Let's be clear, this film is a hodge-podge of ideas that never properly come together. It wants to be a Disney family film, an awkward comedy, a heartfelt drama, and a sweep martial arts film, all at the same time, and it often suffers from tonal whiplash as the scenes bounce from one to the next. It also suffers because the film has a lot of story it needs to tell and it only has a little under two hours to get through it all. Yes, that's longer than the original animated film (by a good half an hour), but without the musical interludes and animated suspension of disbelief (I'm assuming here), the movie has to work to tell its story more convincingly and fails to do so.

Let's start with Mulan and her power. We're told she's able to tap into her "chi", which is why she's such a great warrior. While others struggle with their swords and spears, Mulan has been a master of these weapons since she was a tiny girl. She can kick spears out of the air, split arrows with her sword, and take down hordes of guys single-handedly. If we understood her power or got a feel that she was learning to master these gifts over the course of the movie, that would be something. The problem is that (a) there's no character growth because that opening sequence, between her and the chicken, establishes that Mulan is already a master warrior and (b) chi is never explained in any satisfying way that we can get a grasp of its power or what it can do.

Take the evil sorceress, Xianniang. She, too, is a master of chi and can use her gifts to shape-shift, turning into animals as well as duplicating the look of other people. These gifts, along with her fighting ability, make her a strong ally for Kahn. But because we're told her powers come from chi, we have to wonder if Mulan can do these things too? Why is the sorceress considered evil for using her chi while Mulan, by film's end, is rewarded for it? Both seemingly have the same gifts, tapping into the natural "force" of the world, but there's no clear reasoning given about why or how this situation for each woman comes to pass. We needed a villain, so we're told the sorceress was shunned for her chi, and that's the end of that.

On top of this, the film speeds through any character development we could get with anyone else. Chen Honghui (Yoson An) is another recruit in the army and, essentially, Mulan's rival (in the original film this character was Li Shang and was, overtly, her love interest apparently). He goes from hating her to being her friend because of a single fight. And, when the rest of the army turns her back on Mulan after she reveals she's actually a woman, Chen has her back and the rest of her allies join up. But we don't really know any of these characters, Chen included, so the reason they'd suddenly accept her against their commanding officer's orders, let alone let her lead the entire army against the invading foes, feels a touch forced at a minimum. 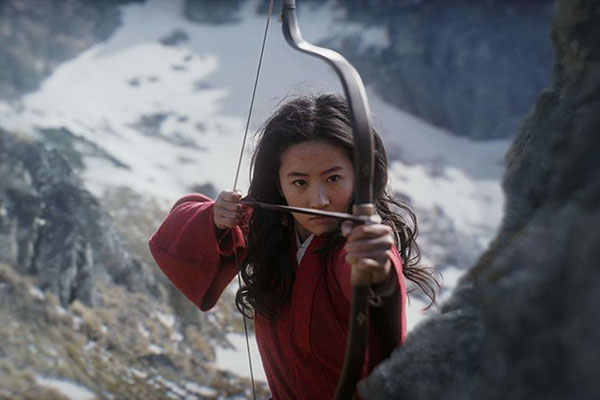 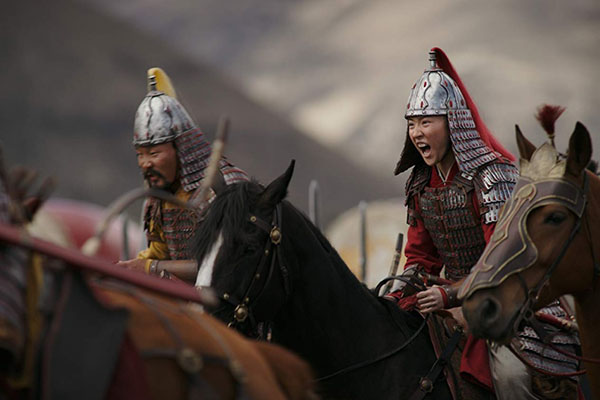 And that doesn't even get to the fact that the action itself, what was supposed to be the one bright point of the film, is lackluster. The actors in all the lead roles were clearly hired for their acting ability, which is great in the quiet moments of the film where they can emote and try to sell their paper-thin characters, but they clearly didn't know how to handle the wire-work. That, or the director, Niki Caro (best known for her dramas, like Whale Rider and The Zookeeper's Wife) simply didn't have an eye for how to make the action look good. Whatever the case, the grand wuxia style falls flat on its face here.

There are great action actors in this film -- Donnie Yen as Commander Tung, Jet Li as The Emperor of China, Ming-Na Wen in a cameo (and apparently the voice of the main character in the original animated films), and, of course, Jason Scott Lee -- but none of these actors get to do very much. Each has a limited amount of screen time and while some of them, like Yen, get to perform one cool stunt (Yen sweeping around with his awesome sword skills), they add little to the actual action of the film in general. For a film that wanted to case the original Mulan story against wuxia style, this movie simply doesn't know how to handle that prospect or make it stick.

In short, this remake is an absolute failure. I went in cold, only knowing as much about the movie as the trailers for this film told me, so it's not like I hate this film because its too different from the original. No, I dislike it because it's a bad film. It is pretty, with wonderful costumes and lovely sets, but that's all dressing for a hollow and lackluster film. I buy that the people involved wanted to make a good live-action movie out of the bones of the animated original, but somewhere in this process there were too many people pulling the film in too many directions without enough time, or skill, to pull it all off. It's just a bad movie.