With Great Power Comes a Pop Quiz and Regular Essays

When you look at where Disney is now with their ownership of the largest superhero franchise in cinemas, the Marvel Cinematic UniverseWhen it first began in 2008 with a little film called Iron Man no one suspected the empire that would follow. Superhero movies in the past, especially those not featuring either Batman or Superman, were usually terrible. And yet, Iron Man would lead to a long series of successful films, launching the most successful cinema brand in history: the Marvel Cinematic Universe., there's a certain irony to the fact that their earlier foray into the format was a bit of a disappointment. Not as a film, mind you, as 2005's Sky High is a solid high school comedy that happens to feature off-brand superheroes, just that when you compare it to the films released today and the literal Billions of dollars they can pull in, Sky High's modest $86 Million takes seems completely anemic now. 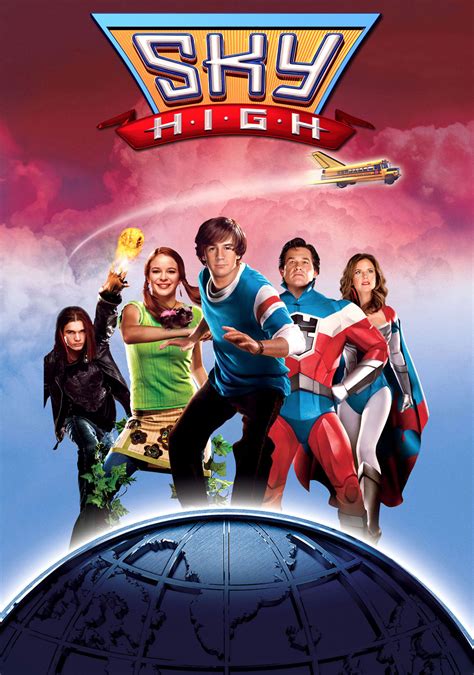 Of course, that's all due to timing. When it was released there were only a couple of superhero franchises actively going successfully: SpidermanSure, DC Comics has Batman, Superman, and Wonder Woman, but among the most popular superheroes stands a guy from Marvel Comics, a younger hero dressed in red and blue who shoots webs and sticks to walls. Introduced in the 1960s, Spider-Man has been a constant presence in comics and more, featured in movies regularly since his big screen debut in 2002. and X-MenLaunched in 1963 and written by Stan Lee and Jack Kirby, the X-Men featured heroes distinctly different from those featured in the pages of DC Comics. Mutants who didn't ask for their powers (and very often didn't want them), these heroes, who constantly fought against humans who didn't want "muties" around, served as metaphors for oppression and racism. Their powerful stories would form this group into one of the most recognizable superhero teams in comics (and a successful series of movies as well).. We were still two years out from the one-two punch of The Dark Knight and Iron Man, the two films that arguably ushered in our current modern age of superhero cinema (and let the genre prestige and Box Office power). Had Sky High come out after 2008, it's fair to say that the movie likely would have performed much better. It also likely would have been a different kind of movie, ruining some of its charm.

In the film we're introduced to Will Stronghold (Michael Angarano), son of the two most famous superheroes in the world, Steve Stronghold / The Commander (Kurt Russell) and Josie DeMarco-Stronghold / Jetstream (Kelly Preston). Where the Commander is super strong, and Jetstream can fly at supersonic speeds, Will has no superpowers; he's just a seemingly regular 15-year-old kid desperately hope that his powers might come in at some point, especially since he's going to Sky High, the superhero high school, in just a few short hours.

He's joined on this first day of high school by his best friend, Layla Williams (Danielle Panabaker) who has control over plants, as well as other new students (and new friends): Ethan Bank (Dee Jay Daniels), who can melt into a puddle; Magenta Lewis (Kelly Vitz), who can transform into a guinea pig; and Zach Braun / Zack Attack (Nicholas Braun), who faintly glows. This lackluster collection of powers gets them all cast into "Hero Support" classes (aka, sidekick school), where they are mocked by all the cool kids at the high school. But then Will suddenly gets his powers, right around the point he accidentally makes an enemy Warren Peace (Steven Strait), the son of the arch-enemy of the Commander and Jetstream. But it's not Warren that Will, with his new powers and new friends, will have to worry about -- it's high school, the cliques, and a potential evil mastermind behind it all that really may be the worst high school has to offer.

In comparison to the superhero films we have now, full of slick CGI and to-tier stars, Sky High hardly compares. The casting of the movie fills the ranks with B-list comedians and solid character actors, making for a really solid collection of actors, but these aren't the A-listers we'd expect now. Hell, the biggest name in the movie at the time was Kurt Russel and he's a supporting character. Sure, this was in-line with casting for superhero films at the time -- Robert Downey, Jr. was far from an A-lister when cast as Iron Man, remember -- but you have to think they would have cast much more well-known teens for this movie were it made today. 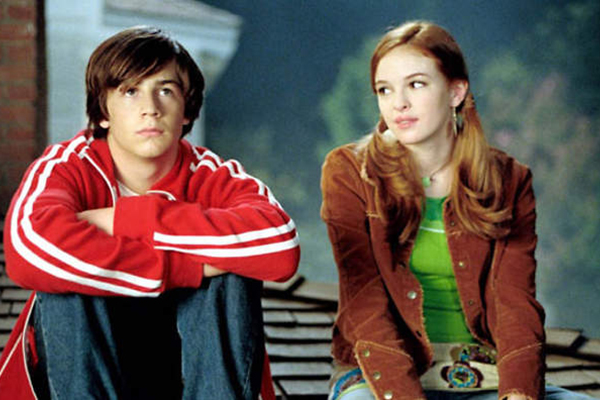 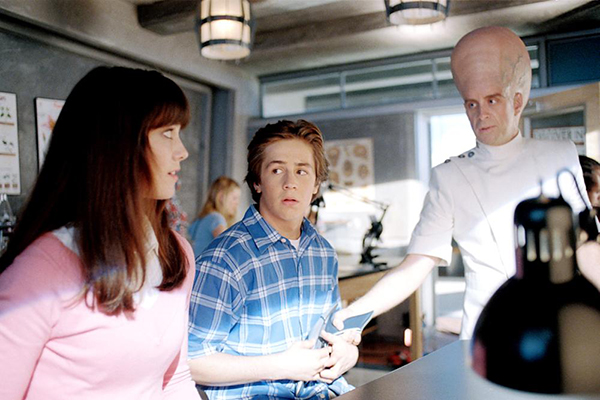 Not that many of these teens didn't go on to be much more well-known stars after, at least in some capacity. Going through and watching the movie now, I recognized Panabaker as Killer Frost on The Flash, Strait from The Expanse, and Mary Elizabeth Winstead from a half a dozen movies I've reviewed over the last year (such as Birds of Prey and Final Destination 3). And that's not to undersell all the other great actors they have in here like Bruce Campbell, Lynda Carter, Dave Foley and Kevin McDonald (from The Kids in the Hall), and Kevin Heffernan. This is such a stacked cast.

They're the main reason this film works so well. The small budget certainly didn't support awesome special effects -- the costumes of the superheroes are pretty chintzy looking now, and the CGI is pretty awful -- so instead it's up to the actors to sell the material. Across the board, with one exception, the cast rises to the challenge, investing in their characters and really selling the crap out of this material. If anything, the small budget allowed the filmmakers to cast the right kind of actors for this movie, those who were prized for their comedic and acting chops over names to fill a poster, and it allowed them to get so much mileage out of the material. The best effect in the movie is the actors themselves.

That said, the biggest hole in the cast is the lead character, Michael Angarano. While he's not terrible, there's something missing to his performance. Will remains a pretty flat character, a touch dorky but without a whole lot actually going for him. He gets is powers (when they eventually arrive) not through some big growth moment but more because the film needs him to have them to sell the next set-piece. Yes, he does grow some as a character, accepting his role as "hero support", but I'd hardly say he changes as a character, not really. And the performance from Angarano does little to sell what growth does come for Will. It's more like things happen to Will instead of Will making them happen, and that's an issue.

At the same time, though, the film is so funny and energetic that it's hard to fault it. It manages to be a solid parody of the whole superhero genre, one that still lands even now with 12 years of big-budget spectacle to come after. It is weird to have a parody of the genre when so much of the genre before it (such as Batman '66 and Batman Forever / Batman & Robin already felt like self-parody), but the films conceit of coupling superhero parody with high-school drama gives it a solid dimension. It's fun as a teen comedy, it's funny as it pokes fun at superhero conventions (for the era, certainly), and it's funny because it has an amiable cast that works the material. 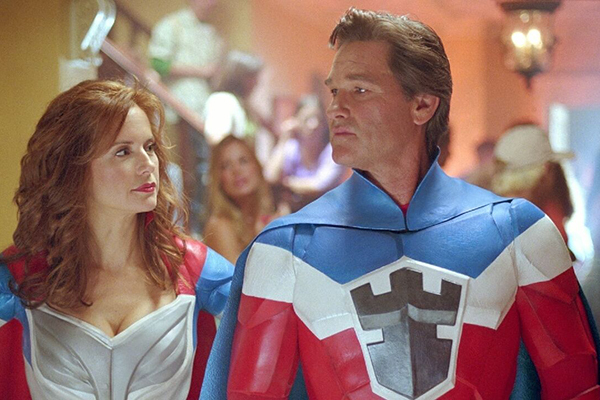 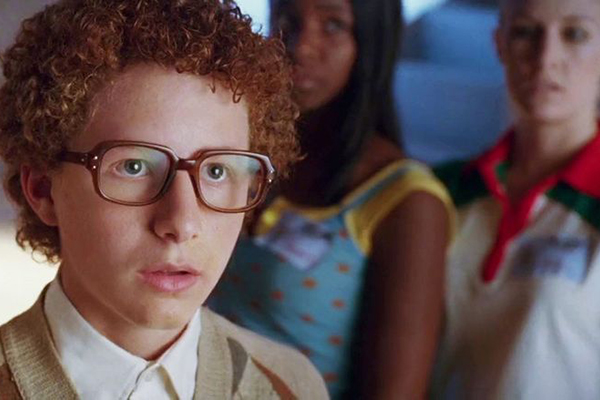 Additionally, it really does pay attention to the high school side of its story. Despite the eventual reveal of a supervillain, much of the story revolves around the trials and tribulations of high school: the bullies, the cliques, and friends slowly growing apart. It uses its supervillain to parallel the basic issues all high schoolers face, and in the process it also manages to use high school tropes to keep you off balance and guessing as to what's actually going on. It's a smart script that really carries the story.

15 years after this film came out, it's impressive just how well Sky High holds up. While it might have been parodying the superhero movies that came before it anticipates so much of the later superhero genre as well. It's no small coincidence, I'm sure, that the next teen superhero film, Spider-man: Homecoming, also finds a way to pair the teen comedy genre with the bombastic MCU storytelling. Sky High was ahead of its time, and probably suffered at the Box Office because of it. But in exchange we got a fun little comedy romp that is so much better because it isn't connected to any larger series or forced to conform to expectations of modern superhero film. Disney wouldn't make this film the same way again so we need to appreciate it because it came out at the right time to be it's own, better movie.