Now that you'vee read both parts of the first issue of The Next Big Score, let's look ahead to the series as it could have been. As with many projects I get involved with (such as my webcomic, CVRPG), I had a whole raft of basic notes written up for where the series could have gone. These are honestly more detailed than some plans I come up with just because I was doing this as part of a writing collective -- had I been left to my own devices for this project, likely I would have just noted a sentence for each volume and let the creative juices guide the overall project. 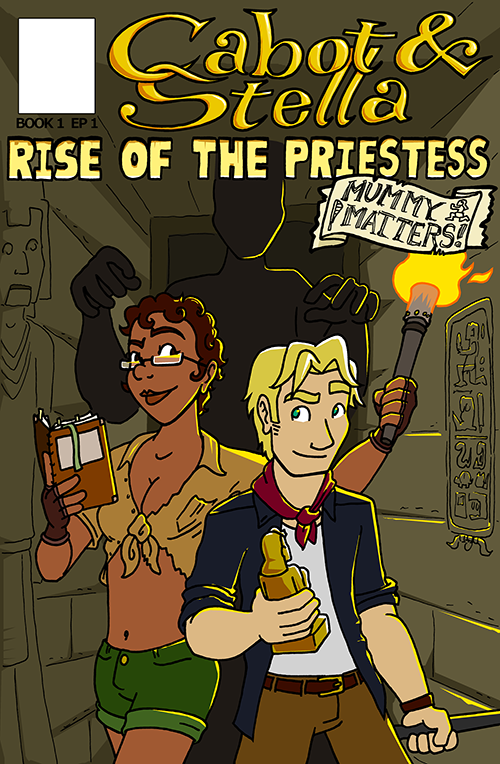 Still, this is a solid plan to really showcase the series as it could have been and where the adventure would have gone. I doubt at this point anything further will happen with this series but, if it did, I'd probably stick to the broad beats outlined here while changing a lot of the little details.

Here it is, then, the notes are originally written for this series. Remember that you can catch up on all my previous writings over in the Works of Mike FinkelsteinWhat's that, you want to read various creative works from Asteroid G Lead Editor Mike Finkelstein? Well, if that's what you want... archive. Also, again, big thanks for Mason Williams for the cover art for the first issue..

Each "episode" could be broken into 3 to 6 issues, allowing for collecting into trades. Trades should culminate in the end of a major arc every 6 episodes or so, allowing for a chance, at the end of the full set, to take a moment and re-introduce new readers to the series with a new adventure to hook them in.

The following blurbs are only to imply the gist of the main plot line. There will be several adventures in each set, with many set pieces. The stories will likely be much longer than hinted at here.

Book 1: Rise of the Priestess

When our heroes, Cabot and Stella, barge into an ancient Egyptian tomb to the High Priest of Sehkmet, they unwitting unleash a mummy upon the world. A female mummy. A female mummy bent on raising her goddess as an avatar and using the godly powers to remake the ancient kingdom of Egypt. The adventurers battle against the (very human looking and quite nubile) mummy trying to stop her from collecting the items of power she needs. The adventure culminates in a battle at a magically rebuilt temple of Sehkmet wherein the Priestess actually raises her goddess, but is struck down before the transformation is complete. The goddess, fearing that she will die if her priestess dies flees the priestess's body, taking a new host -- namely Stella. Avatar-Stella flees, leaving Cabot with the Priestess.

In tracking down Avatar-Stella, Cabot has to team up with the Priestess (who is still healing after her battle with the adventurers). Cabot uses her power to track the goddess, leading them deep into the hills of England. There they find a tribe of Lycanthropic panthers; warriors who protect the lands against intruders and their meddling magics. As it turns out, they have aligned themselves with the goddess Sehkmet, finding a kindred spirit in the lion goddess. Cabot and the Priestess infiltrate the tribe (as two female warriors -- awkward cross-dressing for Cabot). There they find Avatar-Stella, who was made queen of the tribe. While Cabot tries to get Stella to come away from the camp, the Priestess says a few incantations, forcibly moving the Avatar from Stella and back into herself (double-crossing Cabot in the process). The priestess flees, leaving Cabot and Stella to deal with a number of quite upset leopards.

Stella, recovered from her time as the Avatar, leads Cabot to the next likely location for the goddess to appear. Using tracking magic, they head into Arabia, where the spells tell them there's a concentration of feline-aligned magic. Unfortunately, while that is true, it's not the goddess they end up finding. They encounter an evil Sultan who has been using the cat as his totem animal (find an Arabian god or myth that uses the cat for historical reference). His magic has been put to use building himself an empire, one where he has enslaved all those around him. His plan is eventually to take over the world (of course), but not if Cabot and Stella defeat him first. Plus, you know, the Sultan has all kinds of treasure, so Cabot is happy with this plan.

Episode 4: Wolves of the Carpathians

Following a tip about another group of shape shifters in the lands around the Borgo Pass, Cabot and Stella head out to see if they can find any hint as to the whereabouts of the Goddess (and, also, treasures worth selling). In the mountains they encounter Vlad Tepes, evil vampire (and not at all gay ruler of the lands). Stella is immediately entranced by the vampire, who marvels not only at her beauty but also at how much she looks like another woman he has recently brought to his castle -- who just so happens to be Stella's sister, Lori. Cabot has to team up with an unlikely group of heroes, the Sisters of the Avenging Angel, a group of nuns that Lori is a part of (having been sent to a convent instead of going to college like her sister).

While Cabot and the Sisters save the other two heroines before they are made part of Dracula's collection of wives, Vlad lives on, banishing them from his kingdom. The sisters, however, are able to help Cabot and Stella, giving them the next clue to where they can find the Goddess.

With the clues from the nuns, our heroes head into Northern Europe, there tracking down an abandoned shrine built by Norse druids. While Stella searches for points of power to tap into, thinking she can use the spot to cast counter magics against the goddess, maybe buying them time to find her before she realizes her true plans, Cabot starts five-fingering artifacts. This, of course, angers the nature gods, unleashing all fury upon our adventurers (and the world). Somehow Stella is able to temporarily halt the coming Ragnarok, but only temporarily. She has to swear an oath to Odin that, should the magics become unleashed again (by anyone, ever) she'll stop Ragnarok -- and, also, leave Cabot at home. In exchange, Odin points the heroes to the "upstart goddess" -- who is back in Egypt and has managed to raise her kingdom.

The heroes track back into Egypt, now transformed into the old kingdom (and populated by animal-headed guards). They work their way through the land, finding the followers of other gods and goddesses who want to see Sehkmet taken down. This culminates in the final battle against the goddess and her priestess, where the Priestess is defeated, the goddess is banished to a canopic jar which Stella then adds to the family collection on their estates. Egypt is saved, and the lands revert back as they were.

Book 2: Vampires of the East

Going back into Romania on a search for relics in old cathedrals, Cabot and Stella encounter Dracula again -- and this time he is staked and turned to dust (dust Stella collects into a little jar). But Dracula was actually working as protector of the land, weirdly, stopping a flood of oriental vampires from invading the West. Now Stella and Cabot have to go east to find the source of the vampires and defeat the Master Vampire at the top of the food chain (also fighting yeti and other Eastern beasties).

And now the magics of the Norse have been unleashed, and Stella and Cabot have to find a way to end Ragnarok before it even starts, otherwise the whole of existence could be wiped out in a icy gale. Stella uses magic to bring the power of Sehkmet into her and control it, all so that she can use the power of the goddess to track down Loki and defeat him, goddess vs. god. Loki is defeated, but Sehkmet manages to permanently bind herself to Stella. And hilarity ensues.

Stella and Cabot learn about a mad scientist bent on creating an army of the undead (using a combination of steampunk science and voodoo), from two old friends of Stella's, two girls now in charge of the mountain town under the Mad Scientist's lab. The two adventurers go after the mad man and his monstrous machines (Frankenstein motif), who is actually working for the two girls. A series of back and forth double- and triple-crosses ensue, culminating with the girls being made into "Brides of Frankenstein", and a final confrontation between our heroes, Melvin, and his murderous machines.

While all of this is going on, Stella is battling her own inner demon - literally, as Sehkmet is still inside her, trying to take over, willing Stella to give in and become to the fully new Avatar... which leads to Stella/Sehkmet fleeing Cabot when he's distracted near the end of the fight. It should be noted that Sehkmet can only travel to those with magic in their veins, so Stella is a good host, but Lori (having prayer, not magic) is not.

Romania is the location, as Stella/Sekhmet end up at Dracula's castle. Sehkmet offers Dracula what he's always wanted -- Stella -- in exchange for his help with her plans for the resurrection of Ancient Egypt. Cabot works to track down Stella, meeting up with Lori and her band of Ninja-Fighting Nuns. The group heads to Romania, where Lori's contacts say Stella was last seen. There, however, Lori is immediately taken in by Dracula's charms (of course). With both girls under his power, he begins to bring them both over to unlife. It's up to Cabot to save the day (with the help of the nuns) and stage an all-out holy-war on the vampire, the goddess, and their minions.

Stella, weakened during her escapade with Dracula, has given in to Sehkmet and become the Avatar. Cabot and Lori (unable to rejoin the church due to her own half-conversion to vampirism), set off to find the source of Sehkmet's magic and cut it off before she can fully possess Stella (to the point she can't be removed), and stop whatever evil plans the woman has... which include the raising of Atlantis (originally an Egyptian territory), and the enslavement of all of mankind.

The following is a list of potential one- and two-shot ideas that can be used as filler for books short on issues, or as additional "Tales" to come along after the original six books are done.