Today we begin episode two of The Follower. The first episode focused on our titular character, but this time we're turning our attention to Apathy. We going to learn all about him (his back-story), and maybe even get to see him act like a hero. Well, okay, probably not... 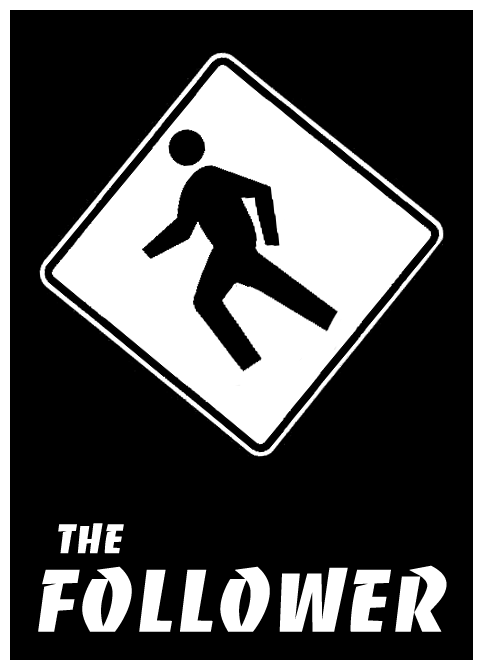 Remember to catch up on the previous adventures of The Follower in the Works of Mike FinkelsteinWhat's that, you want to read various creative works from Asteroid G Lead Editor Mike Finkelstein? Well, if that's what you want... archive before reading this section.

We start focused on a Scene dingy TV. The TV turns on, and we are presented with "At Home with Marsha Steingarden." The opening sequence for the show-within-a-show begins.

The host, MARSHA STEINGARDEN, comes on. She looks to be in her 50s or early 60s. Graying hair, friendly disposition.

Hello, and welcome to "At Home" with me, MARSHA STEINGARDEN. Today we have a great show. We'll learn how to grow our own grains at home, and then, I'll show you how to distill that grain into lager using rubber bands and an old jelly jar.

We pan out to a shot of ETIQUETTE watching the TV, his face illuminated by the dim glow of the boob tube.

Too long you have reigned on TV, MARSHA. For too long... But soon, your reign will be at an end.

The ENEMY saunters into view, peering over ETIQUETTE's shoulder at the TV.

The opportunity has presented itself, and I've put the task in motion.

ETIQUETTE gives and evil snicker, rubbing his hands together at the thought of bringing STEINGARDEN down.

You do seem overly enamored with the thought of kidnapping this woman.

She would appear to be the closest I have to a nemesis... Villains should enjoy the destruction of their nemeses, true?

Well, by definition, I would assume so. But why do you stick to this concept of villains and heroes? Today's crime has different goals. Profits, investments, and returns. A business mentality should be reached.

We shall see. I prefer the act of evil over the monetary benefits. Oh, oh... maybe now...

And when we come back, I'll show you more on how to grow these wonderful grains (hands full of grain). So stay tuned.

We see the inside of the studio, with all the people moving around, doing the tasks of filming this production.

We watch STEINGARDEN walk off stage to be met by her PA, who brings a bottled water for the actress. They walk to the halls back stage.

Okay, this afternoon you have a lunch with the producer, then a meeting about your new magazine. Then a benefit dinner.

Right, okay. I really need some time to sit down and work on the new book some more. Give it some polish.

The PA references her phone:

I could pencil it in Thursday.

By now they've wandered past an exit to the outside world. As they move past, two goons come in and grab STEINGARDEN and the PA. They run out the back and we are left with an empty back stage.

From the TV we watch the tail-end of a commercial, then the channel clicks back over the "At Home. The show intro plays and then we see an empty stage. After a few seconds, the stage is replaced by dead air, then "Technical Difficulties."

We open comic book style on a shot of the Follower van driving through the city. The comic style fades into regular animation, and the show begins.

This show should be interesting.

Eh, I'm going more to support the band than for the music. Far as I'm concerned, rock reached its peak with Nirvana and Alice in Chains.

I'd rather watch linoleum peel.

And this band we're going to see...

Yeah, what do they play?

Power Ballads, lots of screaming and crotch thrusting. Guys in makeup taking themselves too seriously.

Exactly. This is gonna suck.

The van pulls into the theater parking lot. As FOLLOWER parks, we hear a DJ come on the radio.

You're listening to the Way Too Early Show on 91.5 WMRR, The Modern Rock Revolution. I'm the FINK, carrying you through the evening. In news, At Home host, Marsh-

FOLLOWER clicks off the radio. The crew get out of the van and walk over to the stadium.

So, anyone up for a pizza after the show.

Dude, you think about anything besides pizza?

Yeah, cause you work there. Didn't you ever hear the adage about those that work at restaurants never eat the food?

Because they know how it's prepared.

I just deliver the pies.

You and turtles man, that's all I'm sayin.

At the front doors, a ticket taker greets them. They pass over their tickets, get stamps on their hands, and move inside the building.

They crew wander through the crowd and meet up with a rather dense bundle of people. We see everyone crowded around a dude in standard hair metal garb, hot pink-and-black tiger-stripe tights and all.

I know that DUDE.

They've been milling closer to the rocker, and we see him recognize APATHY and come over.

Likewise. What band you with?

Silent Agony. We've been traveling the state, building up some press for our first release.

DUDE motions over his ASSISTANT, who brings over some passes.

Here, lemme get you back stage passes.

The passes are handed out amongst the group.

We're gonna get to go backstage?

(sigh) Guess so. DUDE, these are my friends, FOLLOWER and OBVIOUS.

DUDE and his entourage extract from the crowd and disappear off into the bowels of the building. A couple of the fans from the crowd, really nerdy looking fanboys, GLEN and DOUG, come over.

Man, it sucked when that band broke up. They were my favorite.

Dude, you guys had that one track, "Chronic Reality," man. That was my girlfriend's favorite.

Yeah, then she dumped you.

The heroes walk off after APATHY gives a couple of autographs.

We see DUDE and APATHY performing on a small venue stage. They're dressed in grunge garb, not hair metal attire. They actually aren't half-bad. The crowd is enjoying the music. There's moshing and crowd surfing.

Thank you! We are 2 Day Hangover, and you guys are a great crowd. We've got one more song for you!

APATHY launches into a solid riff on his guitar, and the crowd goes nuts.

DUDE grabs a bottle of water, drinks and splashes himself with it, then throws it out at the crowd. After a second, a beer bottle comes back and hits him square in the head. He stumbles off stage. APATHY at this point has become lost in the music, and thus does not notice the lead singer is flat on his back in front of the stage, allowing for his killer solo to continue to play during this scene.

The crowd converges on DUDE, helping him up. He stands, looking dazed.

We see a mosh pit with a bunch of guys bouncing CONCERT GIRL around. She's trying to get free of the pit but no one will let her out. DUDE, stumbling into a run, moves into the pit, throwing the other guys around, and extracting CONCERT GIRL. She gives him a tearful hug.

That was great, man. You're the dude.

DUDE strikes a hero pose. The rest of the lights dim, and DUDE stands, his grungy hair blowing around him, very heroic.

And that's when the band broke up, all so he could go on tour as an avenging concert hero called "DUDE".

DUDE? Why have I never heard of him?

Because his music sucks.

He certainly is drawing a crowd tonight.

But a heroic one.

APATHY grumbles to himself.

We see ENEMY and BRUISE out front of the dingy club, sharing a smoke.

The package has been secured.

There were no hassles on the assignment then?

Naw. The guys had a couple of disguises. They went in all masked.

And no security interference...?

Good. Keep the package secured until further plans are decided.

No problem. I got a couple of my good guys on the dames.

ENEMY throws the smoke on the ground and grind it out with her bondage heel. She looks up with a thought on her face.

You up for some pizza?

At the time I wrote this, Martha Stewart was still a huge deal (even after going to prison for tax evasion or whatever it was). She's not anywhere near as big now, so likely I'd have Etiquette be really hung up on some other reality star (that he feels isn't proper enough). Steingarden would probably show up in-universe, though, just as a reference to this version of the show. Gotta keep the Easter eggs.

It makes total sense for Apathy to know Dude went off to be a concert hero and, at the same time, not realize what bad he was now playing in. He doesn't care enough to keep up. That is, of course, his thing.

But that's it for now. In the next part (or the one after), I know there's at least one solidi action beat, so we have that to look forward to after this fairly talkie intro. Until then: Same Follower Time, Same Follower Channel.