Let's Go to the Mall, Today

Kevin Smith's Clerks with an impressive success. Created by a self-professed film school drop-out, the movie was made on the most threadbare of budgets ($27,575 bucks for the initial cut) and made on evenings when the store Smith worked at was closed, the movie went on to pull in a tidy $3.2 Mil, a nice turn of profit especially back in the mid-1990s. It became a sleeper hit, a darling of the Gen-X and Gen-Y set and single-handedly launched Smith's career. 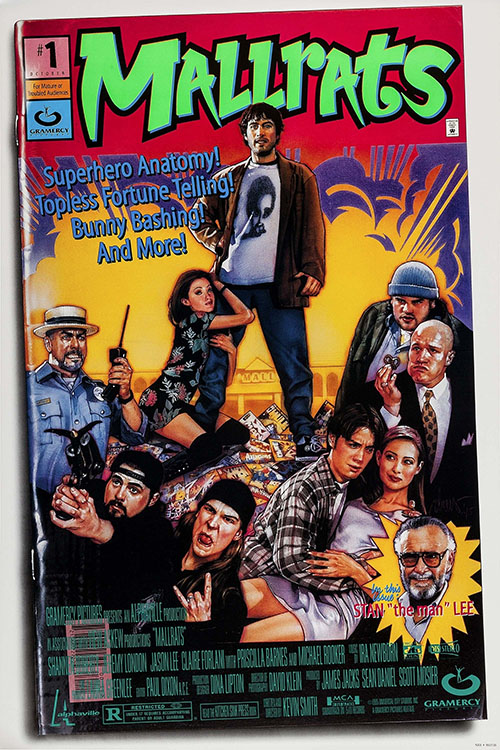 It's also a very personal story, motivated entirely by Smith's experiences working at a convenience store/video rental store (the two stores are joined and run by the same managers). Everything in the movie came from Smith's own life, and the characters feel lived in as they're all inspired by Smith and the people he knew. How, then, could Smith make a follow-up to that and stay true to his own personal storytelling. The short answer was that he couldn't but the resulting film (especially the original cut released years later) would actually prove to be a solid movie in its own right... once it found its audience.

Produced one year after the release of Clerks, Mallrats is a very silly story. It focuses on two best friends, T.S. Quint (Jeremy London) and Brodie Bruce (Jason Lee), who for varying reasons (depending on the cut of the movie) had just been dumped by their girlfriends, Brandi Svenning (Claire Forlani) and Rene Mosier (Shannen Doherty). To salve their feelings and find a way to distract themselves they end up heading to the nearby mall to, as the film calls it, "mallrat". Essentially they spend all day around the mall just hanging out, chatting, and not buying anything.

Things pick up for the guys, though, as they each realize a way to get their girlfriends back. T.S. finds out that Brandi's father, Jared (the fantastic Michael Rooker), is working on a pilot for a game show (think The Dating Game just under a different name) to be filmed at the mall, with Brandi as the lucky girl talking to three hidden guys. Meanwhile, Brodie keeps running into Rene as she dates a new guy, Fashionable Man manager Shannon Hamilton (Ben Affleck), but quickly Brodie learns that Shannon is something of a creep (with a predilection for rather uncomfortable sex). The two guys team up to ruin the game show, win the girls, and find something of a happily ever after.

When it was released Mallrats was something of a failure. Given a budget of $6.1 Mil to make a teen sex comedy (and absolutely astounding amount of money for a guy that made his first film on $27 Grand), the film ended up only recouping half its money at the Box Office. It's easy to see why, too, because this isn't exactly a film that sells itself. It's dumb, it's a bit sloppy, and it doesn't really have any big stars in it, outside of Doherty (and she's not even in the film for much of the runtime). It's a very Kevin Smith film before he was yet to become a name for a whole generation of movie watchers. 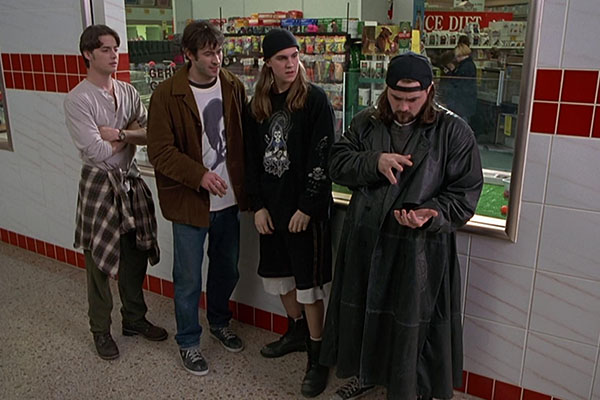 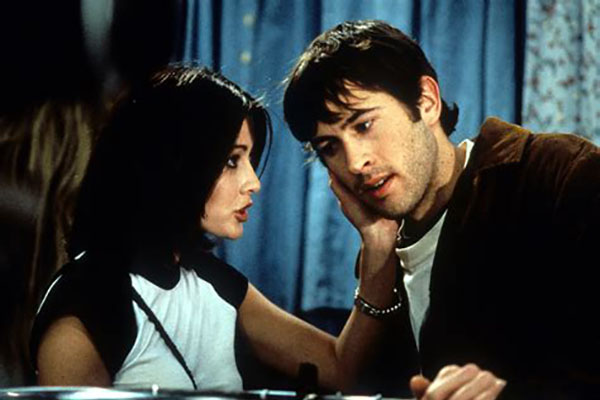 The biggest flaw with the film is its whole setup. Whether you watch the regular cut of the 10th anniversary extended edition, the fact is that the whole movie hinges on every single key character all showing up at a mall on the same day, at around the same time, so that all of the actual plot of the movie can roll out in about six in-movie hours. It's a lot of plot, and a lot of story machinations, that feel incredibly rushed once you take a step back and look at it all. Brandi has to break up with T.S. in the morning, agree to be on her father's game show, go to the mall, and then be wooed back (after breaking up with T.S. for good reason) in a day. Meanwhile Shannon has to court Rene, after Rene just broke up with Brodie (again, for good reason), all so that they can all be at the mall (where Shannon is both dating Rene and working) so Brodie can win the woman. It's... a lot. Too much, frankly.

Tonally the film is really wonky. While Clerks wasn't exactly a serious film it had a down-to-earth vibe that worked pretty well. It's comedic moments worked as sarcastic asides for characters struggling with their inability to move on in their own lives. Mallrats, though, is basically a big teen sex cartoon. It's over-the-top like a National Lampoon movie, and you can see how Smith and production company Gramercy Pictures were trying to make the "next" Animal House. There's that vibe here, but then you have Kevin Smith's desire to have his characters stand around and talk about comics and it all just feels loosely hung-together. It never quite works as well as the production team expected.

Some of that can be blamed on the rough edits the film had to go through after the initial cut (that so-called "extended cut" on re-releases) failed with test audiences. Whole chunks of the film were re-shot and overdubbed, the entire opening of the film was ditched, and everything had to be quickly reworked with some rushed re-shoots just to get something in theaters. The extended cut of the film doesn't fix all its flaws, mind you, but it does feel more cohesive and it certainly sets the "teen sex comedy" tone (a la Animal House) a whole lot better than the final cut.

And the thing is that as shaggy as the final result may be, Mallrats is a very watchable film (for a lazy afternoon, with or without illicit substances). Although Smith wasn't a pot smoker when he made the film he very much tapped into that stoner film vibe with this movie. It's a ramshackle, but very funny, movie that all just hangs together in a way that makes sense if you don't think about it at all. the cartoony action, coupled with the ribald jokes and course language, adds up to a film that works better on home media, with a group of people that can laugh uproariously as they chow down on food and pot. That's the target audience for this movie, but the theater was the wrong place for it. 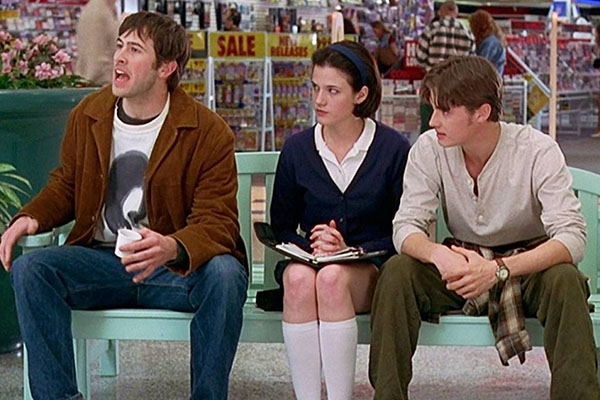 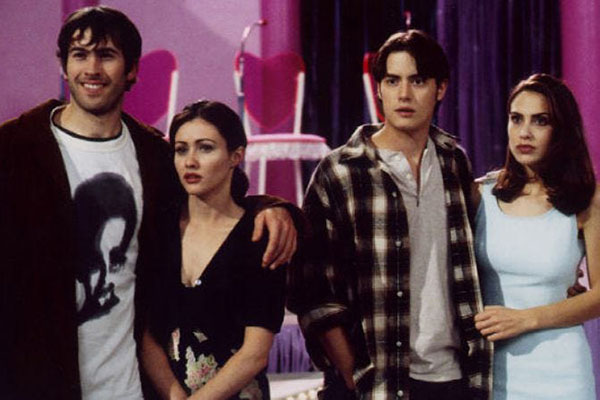 Smith has stated that of all the films he's made, Mallrats is the one he can watch and enjoy, in large part because he didn't see it over and over again as it played in theaters... because it only played for a week and then dropped off. It's fresher for him than other movies in his stable, but I think it's also that, without worrying about plot or mechanics, this is probably Smith's funniest film. Every other film he made in this era had a story to tell, a personal statement Smith had to make. Mallrats, though, just says that malls are cool and comics are fun to read. It's a very Kevin Smith film but it's not personal in the same kind of way as Clerks or Chasing Amy. It just gets to be a dumb goofy lark, and in that regard it works.

For me, Mallrats is the film I go to the most when I want to watch Smith. This is his dumbest movie of this era (although he'd make worse down the road) but it is a fun movie to simply relax to on a chill afternoon. The extended cut is better, and that's the version I watch now, but no matter what this is a movie to just enjoy for what it is. Don't take it seriously, and don't expect much out of it, and Mallrats will deliver the mellow laughs you want from a friendly good time. That's all it is and all the film needs to be.