Down in the Sewers, Where the Monsters and Mutants Roam

We've been going through the Blaster Master series and it's been a bit of a learning experience, at least for me. While I'd played a few of these titles when they came out, there were a number of off-shoots, related games, or unrelated titles that somehow were part of the series. Robowarrior, for instance, contributed not only some monsters and ideas to the later Blaster Master series but also sent it's own sequel into the series as Blaster Master Boy (Blaster Master, Jr. in the UK). 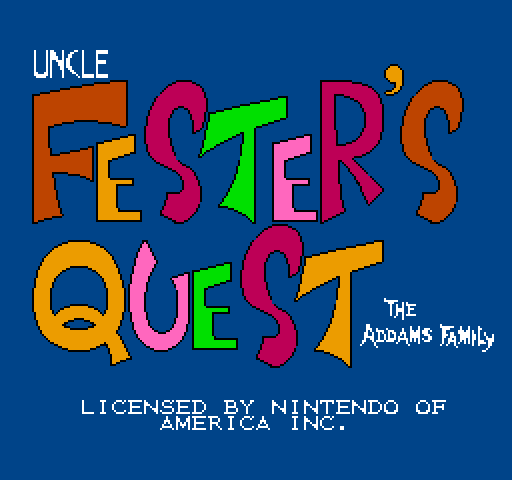 Of the related games, though, one that I found surprising was 1989's Fester's Quest. I remember this game coming out originally, getting my copy from an old rental store (that was later gobbled up by Blockbuster) and trying to figure out my way through it. When I rented it back then I thought it was just a weird title, and certainly a strange fit for the Addams Family license (or, well, I was eight so I more thought, "this game is weird," and turned it off). Now, however, I can spot the DNA of this game: it's a Blaster Master title by a different name.

Sunsoft, showing the same desire to cram the mechanics of Blaster Master into whatever shovelware title they could, essentially took the top-down sections from the NES alien-fighting game and crafted a new adventure out of it. Most of the time in the game you are playing on the top-down world of the city, and sewers, around the Addams' mansion. Occasionally you enter buildings and explore them via forward-facing, faux 3D dungeons, although these are a barely-there change in mechanics and if they weren't in the game you wouldn't miss them. No, this is primarily a top-down Blaster Master game with all the same mechanics (just without the tank sections).

In the game you play, naturally, as Uncle Fester. The night before aliens came down to the city and beamed up all the citizens. Grand Mama saw it coming and cast a spell that protected the family but, sadly, everyone else was taken away. Since Gomez had to stay at the house to protect the family (although, frankly, the grandmother was doing a bang-up job), it's up to Fester to go out into the city and find a way to stop all the evil aliens so the townspeople can be saved, peace restored, and the Earth protected once more.

If you're wondering why aliens are in an Addams Family game -- aliens not really being a motif the family ever really dealt with -- well, that's a good question the game never properly addresses. What it does speak to is the fact that this game was built on the bones of Blaster Master (and, really, some ideas from Robowarrior) and aliens are totally a part of that series. With some members of that game presumably moving over to Fester's Quest, the monster motif was brought in as well. 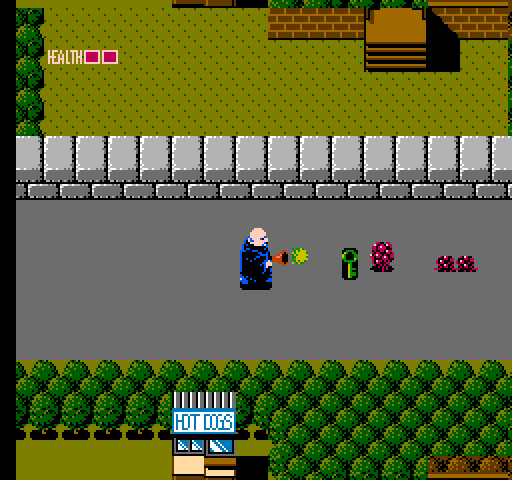 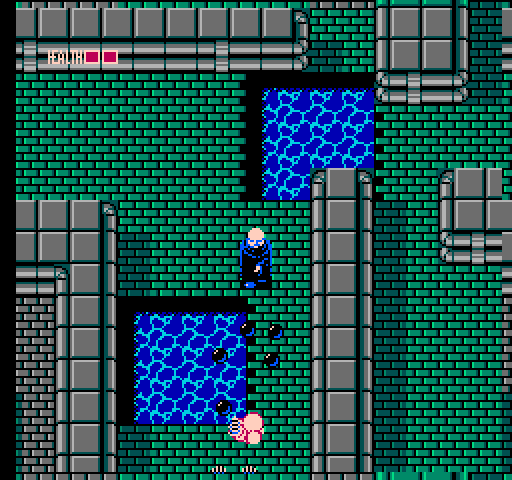 You might sit there saying, "I don't really see the connection between this game and Blaster Master," so let's illustrate. Fester wanders the overworld with a gun. That gun can be upgraded with random power-ups collected from downed enemies, and the upgraded gun will gain better range, and more wave to its shots, than the basic lemon pellets Fester starts with. Additionally, defeating bosses can unlock the way towards no upgrades which will let Fester access some new areas and clear out deeper dungeons. The game is, in essence, like all the dungeons of Blaster Master stitched together with the same mechanics guiding both.

While the similarities are there, you can identify some ways that developer Sunsoft wanted to evolve the mechanics of the game. Making the entire adventure top down does put a bit of a Legend of ZeldaCreated by Nintendo in 1986, the original Legend of Zelda game presented players with a open world to explore, packed with dungeons and monsters all ready to kill them at a moment's notice. The mix of adventure and action game play created a winning game and launched not only a successful series but an entirely new video game genre. spin on the adventure. Fester has an item menu and can collect some useful bits of equipment, such as light bulbs to light up the sewers, or potions to refill his health, to aid his quest. He's also able to collect money and use that to buy more useful gear -- hot dogs to heal health are one of my favorite little additions -- making it valuable to clear out enemies and sometimes farm up drops.

That said, not everything about the game's systems work really well. To start, enemy drops can be both helpful and a hindrance. Blue drops are upgrades, red drops are downgrades, and it's entirely random which an enemy will drop. It sucks when enemies refuse to drop upgrades for long stretches because the RNG simply isn't there. Worse, though, are the moments where you don't notice the color and fail to see a downgrade when you go to pick it up. And it's especially sucks when a bunch of stuff you need drops with a downgrade right in the middle of it all. Ugh.

The other major issue is that there just isn't enough variety to the game. The whole world is one large overworld and the sewers underneath (with the sewers eventually giving way to the alien ship, but it all really feels the same). It all looks the same, and it's all interconnected, so not only does it feel like you're wandering the same world for hours, it's also hard to keep track of where you are. This is a game that absolutely forces you to make your own maps just to get by because the title won't give you any assistance, or easy landmarks, so you know where you are and where you went. 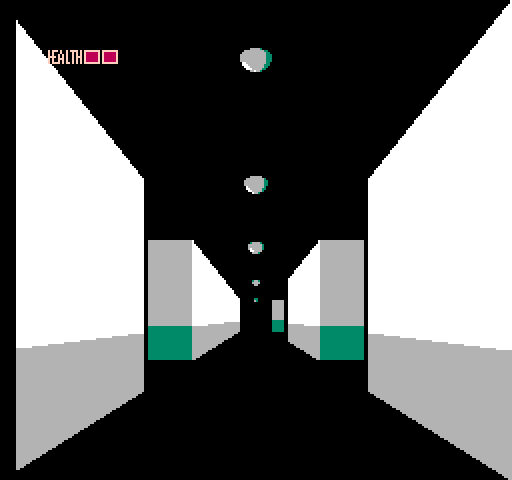 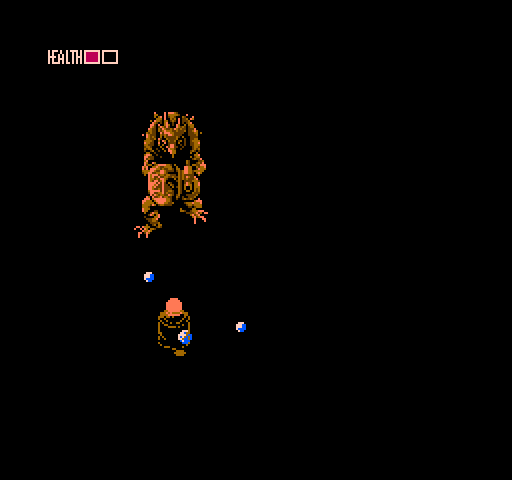 And, of course, like all early NES games, this title is hard. The lack of direction in where you should go and what you should do is bad enough, but then the enemies are just unrelenting. The screen will always have a few monsters chasing you, sometimes going so far as to cut between walls so they can catch up to you (it always feels unfair when they do this). The bosses aren't much better, having that same annoying quality from Blaster Master where they're large, annoying to hit, constantly spamming projectiles, and with only limited chances to damage them. The game, in general, is a lesson in frustration.

I can appreciate Sunsoft trying to push the Blaster Master formula forward. It's interesting to see how they adapted it to this package and tried to create something new from the dungeon sections of the original NES game. But it just doesn't work. It's not really fun to play, and is more frustrating to figure out than anything. More diverse areas to explore, more to do, and more power to gain for Fester could all have made this into something interesting, maybe something to equate with Startropics for style and substance. This game, though, just lacks anything inspired from the license it has, and it doesn't even have fun game play to make it worthwhile.

You know what would pick this game up? A tank. Fester needed SOPHIA to make this title interesting. Sadly, it was never meant to be.