To the Bottom of the Ocean

Pirates of the Caribbean: Dead Men Tell No Tales

Well, it was nice to have a good film (even if only by degrees) while it lasted. As I said in my review, I rather enjoyed the fourth Pirates of the Caribbean film, On Stranger Tides, for what it was. It wasn't a great film, but it was fun, and it managed to create a pretty lighthearted film without getting bogged down in constant references to past continuity. I really liked that. 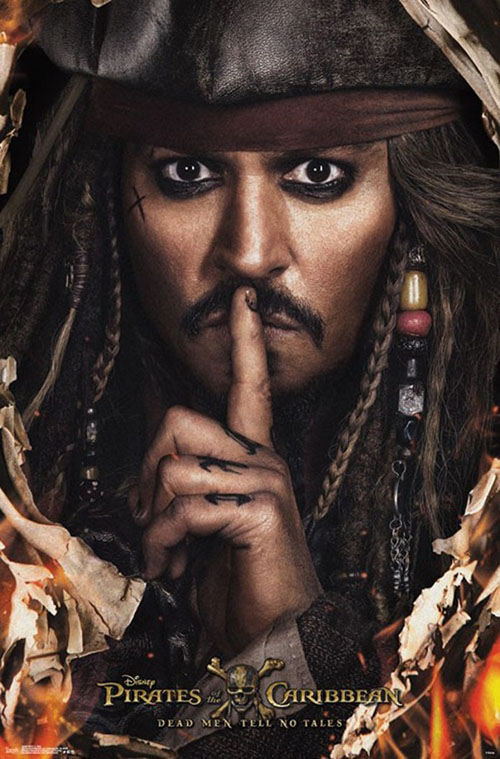 It's an important point to make, in fact, because after three films of the saga of Jack and Will and Elizabeth, their story had more than played itself out. Getting new characters, a new story to focus on, and a new quest unrelated to anything that had come before really injected a sense of energy to the whole affair. On Stranger Tides proved this series could actually thrive if it just ditched Will and Elizabeth and told a largely unrelated tale set in the same universe. So, of course, it had to go back to Will and Elizabeth and their whole story for the fifth film. Ugh.

Well, okay, Will and Elizabeth themselves are tangential to the story. They're the motivating factor while their grown up son, Henry (Brenton Thwaites), goes off in search of any way to break the curse that forces his father, Will, to ride the seas for ten years at a time at the helm of the Flying Dutchman (after he took on that "honor" from Davy Jones). In his travels, Henry has learned of the existence of Neptune's Trident, the only problem is finding it. The only man that seems to know how to track it down, in any capacity, is, of course, Captain Jack Sparrow.

Jack (Johnny Depp, of course), is busy just being Jack: a former captain with no ship and a crew that's tired of his crap, lacking the money for booze or any way to retrieve his (still shrunken) Black Pearl. Jack stumbled (drunkenly and literally) into Henry while they're both at the same port, and they, along with a supposed witch (who's really just a female scientist), Carina Smyth (Kaya Scodelario), all end up nearly getting executed before Jack's old mates save the day. They all get to a beat-down ship and sail off to find the trident, pursued by the British... and one other man: the ghostly Captain Armando Salazar (Javier Bardem), a cursed captain who wanted revenge against Jack as a young Jack was the one that (through a series of events) ended up cursing Armando. Whoever finds the trident will control the ocean and can have anything they want.

In construction and style, this fifth film reminds me a lot of Dead Man's Chest and At World's End, the back to back second and third films in the series, and the comparison does this film no favors. Yes, Will and Elizabeth are barely in this film, but the roles they play are basically filled by Henry and Carina. He's the bland, but heroic, adventurer while she's the headstrong girl who clearly wears the pants in their (burgeoning) relationship. What chemistry they have comes from the female lead, but, like the previous films, the romance angle is too rushed to really stick properly. 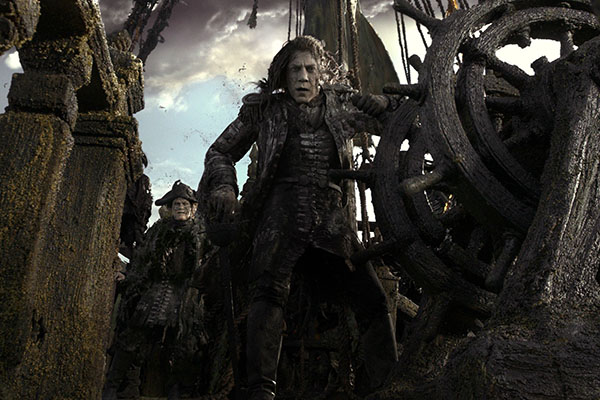 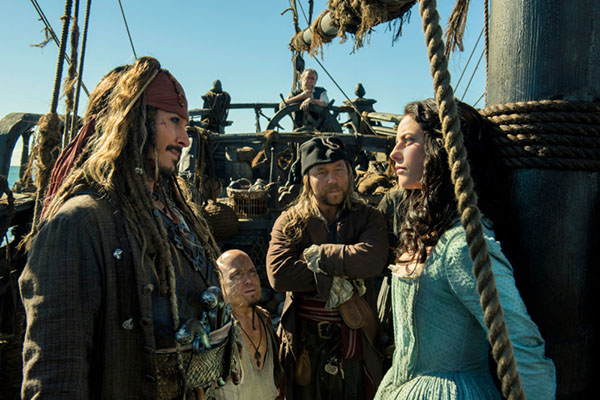 The storyline (and quest to go along with it) are also an absolute mess. To start with, there's a trident that belonged to a god that can not only break any curse but also control the oceans and, in the process, apparently retcon every previous plot point as needed. What's the point of having a ship that ferries the souls of dead sailors to the great beyond if you can just break that duty with a trident? What happens to souls of the sailors after that? DO they just float in limbo? Don't expect the movie to answer that issue.

Beyond that, there are a ton of plot threads that all get short shrift in the process of the film. Captain Salazar is one example: he's the villain of the film because he wants to kill Captain Jack. He has a crew of undead soldiers, all of whom were, essentially, killed and cursed by Jack (even if Jack didn't know it was going to happen at the time). The captain and his crew, it's worth pointing out, were pirate hunters specifically entrusted by Spain to keep the safety of the high seas. While I understand that undead, cursed sailors are scary, why exactly is this guy the villain? In a different movie his gaining the trident, and regaining his humanity, would be the story of the protagonist.

That illustrates the bigger issue, of course: the pirates in these films, this one especially, are treated as the heroes. Much of that is due to Captain Jack being such a lovable scamp (although we'll get to that in a second), so the films didn't want to kill him and, over time, evolved him into the hero of the series. That, in turn, meant that all pirates had to, somehow, be good guys. (The fourth film, mind you, at least knew well enough to make some of the pirates villains.) That means that when it comes time for one of the characters to make a "heroic sacrifice" it ends up being a pirate -- Barbossa (Geoffrey Rush) in this case, who lets himself die to save a daughter he only just met and barely knows at all. Sure, okay.

On the subject of Jack and Barbossa, neither of these guys really have any kind of evolution to their characters. Sure, Jack has nothing at the start of this film, but that's his ground state usually -- on his own, looking for a ship, desperate to find a crew so he can just sail off -- and while he eventually gets a ship by the end of the film he hasn't exactly learned anything or changes one iota. The film rewards him for, essentially, regressing, more or less, back to where he was at the end of The Curse of the Black Pearl 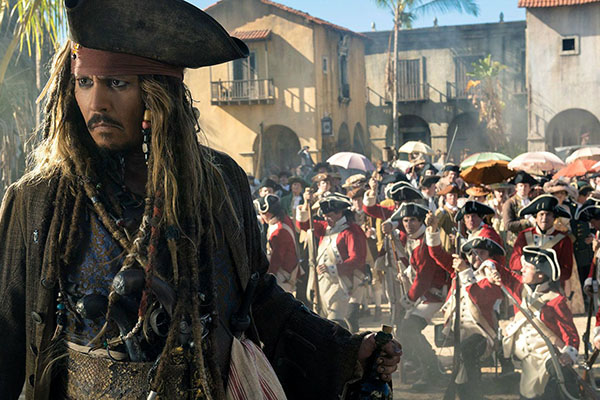 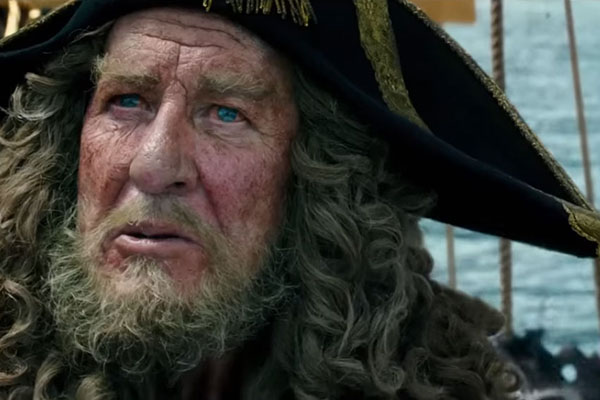 Barbossa, too, essentially ends up where he was at the end of that first film, too: dead. He doesn't really learn much of anything the whole movie; he starts up a bastard, remains a bastard through out, and then suddenly decides that the daughter he's only just met is worth dying for it. It's sweet, sure, but it'd be better if the film developed their relationship at all so that when his sacrifice came it didn't feel hollow. There's no real emotion to it, he just dies, presumably so Rush never had to come back for this series again.

Over all, this film is just pointless. It seems like it was made to simply tie up one loose end from the first trilogy of films (a loose end that really didn't need tying up) and to retread the material of the previous films. I'm not sure why they went this direction -- the fourth film made over $1 Billion at the Box Office, proving that semi-related films in the series could make all the money ever -- but this tired film is apparently the best they could come up with.

If the series continues (and it's in a bit of limbo right now), it'll be without Johnny Depp (because he's persona non grata in Hollywood right now. Disney is apparently looking at a reboot of the series, or an all-female pirate cast, or both for the future of the franchise. Whatever they do it better shake up this series. Out of all five that have come out, only two (one and four) have been worth a damn at all. Skip the rest, especially this one, and just get as drunk as Captain Jack; you might just be happier.