Pirates of the Caribbean: At World's End

I don't know what I should have been expecting from the third Pirates of the Caribbean film, but after the dismal film that was the first sequel, Dead Man's Chest, I feel like this third edition managed to give me exactly what was promised, which is till, somehow, a disappointment. Dead Man's Chest sucked while this film manages to suck in the same, and different, ways which I guess could be rated as some kind of a feat. 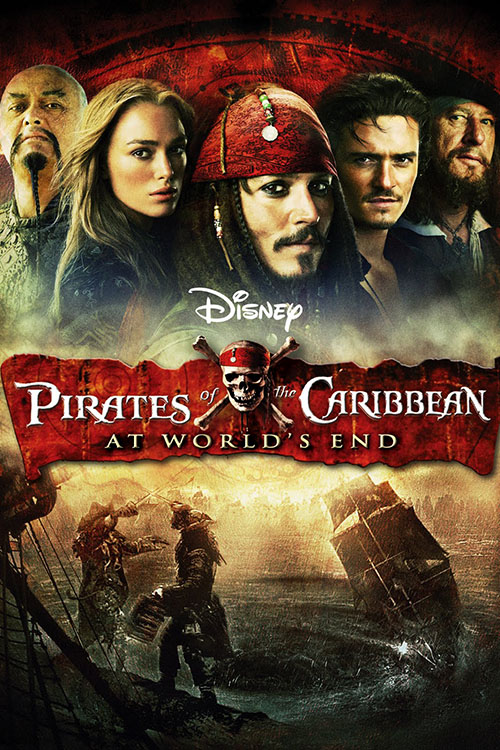 I doubt Disney listed to many of the complaints from critics when it came time to do post-production of Pirates III. Remember, the second film was a massive success, a Billion Dollar film that (as I feel like I need to mention once again) was based on a theme park ride. Whatever the critics thought really didn't matter as Disney was laughing themselves all the way to their (gold-plated, mouse-themed) bank (built in sunny Orlando Florida). If the second film doubled-down on everything that made the first movie, The Curse of the Black Pearl, a success, this film takes it to the logical conclusion, full of bombast and special effects, along with a lot of drunk Captain Jack, and not much else.

When last we saw our heroes, Jack (Johnny Depp) had been eaten by the Kraken and, apparently, sent to the afterlife reserved for all dead sailors: Davy Jones's Locker. The rest of the crew, including Will Turner (Orlando Bloom) and Elizabeth Swan (Kiera Knightley), have to band together to find a way to bring him back, which means invading the base of Singaporean pirate captain Sao Feng (Chow Yun-Fat) to steal his map to the underworld. This leads to much fuss, especially when the British navy (under the command of Tom Hollander's Cutler Beckett) arrive and start shooting at everyone (under the guise of trying to eliminate piracy).

Map in hand the band travel to the underworld to rescue Jack, a fact that in the second film didn't really make sense (as no one really liked Jack) but here is retconned that they need a magical totem he, as a Pirate Lord, carries on him: a piece of eight (of which there are nine of them for... reasons). If the crew can get all the pirate lords together, they can use their nine pieces of eight to summon Calypso, goddess of the sea, so she can have her revenge on Davy Jones, and they they can defeat Davy Jones, cutting the legs out from under Brittan's East India Trading Company and save the day for pirates of all shapes and sizes. Wait... did the film just get us to root for the bad guys? Really?!

I had any number of issues with this film (like I did with the second movie), and we'll get to listing all of them (because, frankly, this film is bombastically stupid), but there are two things that stood out more than any other for me: for a film called "Pirates of the Caribbean", these guys (a) don't do any piracy and (b) have long since stopped sailing in the Caribbean. Most of this film takes place in and around Singapore, bear in mind, which is (checks globe) on the other side of the world from the Caribbean. Maybe I'm being needlessly pedantic but this would be like if Warner Bros. produced a Middle-earthCreated by J.R.R Tolkein, Middle-earth is the setting for the author's big sagas, featuring the characters of hobbits, dwarves, elves, and men. film where all the characters are hanging out at a Renn Faire. It looks right, but there's something very much missing that used to be a core of the experience. 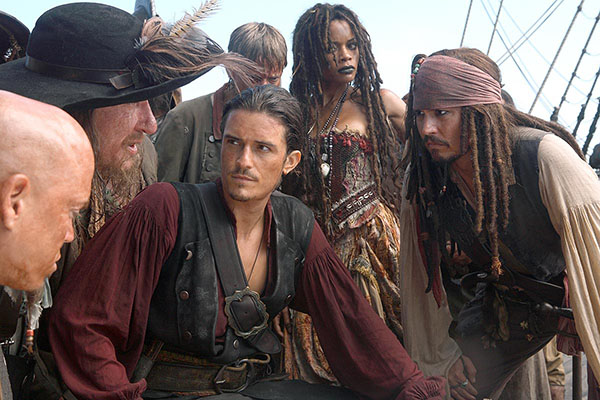 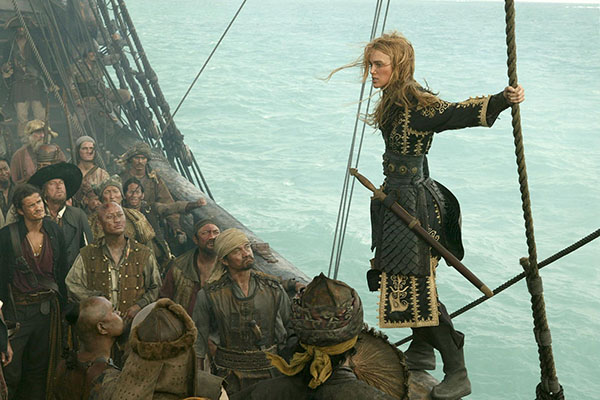 Beyond my issues with the fact that the film has long since lost its titular modus operandi, we have to tackle the fact that none of the characters behave at all consistently or bother keeping their motivations the same from one scene to the next. The biggest offenders here are Will and Elizabeth who go through the film essentially double-crossing each other, back and forth, simply so the film can have another twist or lurch in some new direction. None of their machinations make sense for either character but they do serve to make it seem like these are two bitter people that really should not be together. So, of course, during the climax of the film Will proposes to Elizabeth again, she accepts, and they're promptly married so they can have a love for the ages. Ugh.

The film also loves retconning previous sequences or creating mythology whole cloth without any reasoning behind it. Did you know there were Pirate Lords? The previous two films never bothered saying anything about it. What about the magical pieces of eight that all the pirate lords had? Yeah, that's new too. As we learn, a Pirate Lord has to bequeath his piece of eight to a worthy successor; if he dies without doing so, no Pirate Lord can claim his piece of eight and take his place on the counsel. This is explicitly why the crew has to save Jack, mind you.

This completely screws up the story from the first movie, though. There we learn that Geoffrey Rush's Barbossa stole the Black Pearl out from under Jack and left Jack (with his piece of eight, as we now know) on an island where he'd starve to death and never be seen again. Jack wouldn't have chosen a successor at that point, so his piece of eight would be lost to the pirate lords. Knowing what we know now, this while plot point (which is what motivates the entirety of the first film) makes no bloody sense whatsoever.

They need these pieces of eight (all nine of them), mind you, so they can summon Calypso out of her human form (that the pirates apparently trapped her in to begin with). And Calypso is... some random voodoo woman we saw a few times in the previous film, Tal Daima (Naomie Harris) and in no way, shape, or form was she meant to be this grand goddess. This is clearly a retcon to give her character extra significance, but here, too, it ruins parts of even this film. They travel to the underworld for sailors, which is Calypso's realm, but the entire time they're there Daima has no clue what's going on or how to get out which, you know, she should absolutely know as its her realm. It absolutely feels like this revision was made in a rewrite of the third film and no one bothered to smooth out the issues it caused. 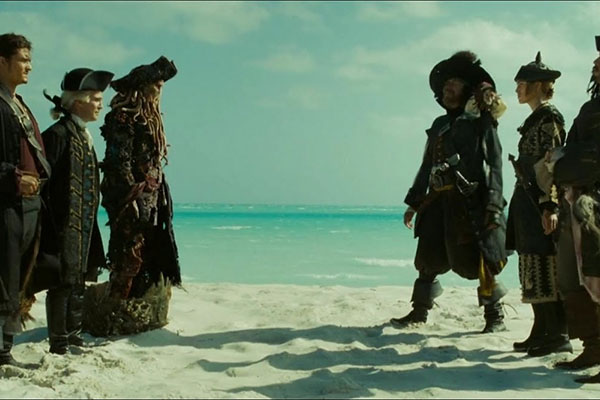 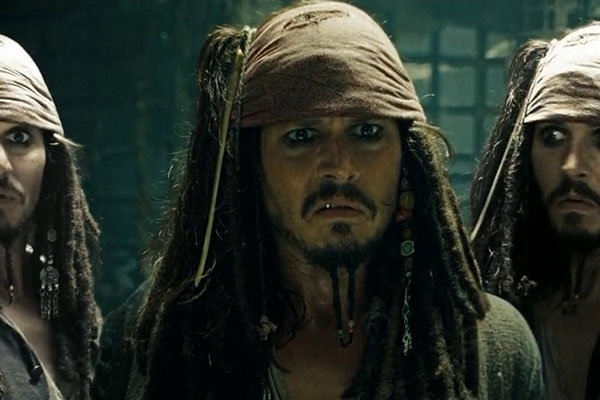 Seriously, I could go on and on about the plot holes this film causes (to itself and the previous films), but I think the point as been made. In all other respects, though, this film is on par with the previous film. It's handsomely made, yes, but with a shallow story, special effects (that haven't aged well) used to cover up gaping holes in the story, and wildly erratic pacing that lurches all over the place just to give the audience ostensibly what they want: Captain Jack being funny and drunkenly wandering around. Captain Jack, though, is the worst part of the film at this point, though, and while I have my qualms with setting this film around the Pacific Ocean, the first half-hour of the film (which doesn't have any Jack at all because he's dead) is also the best paced part with the strongest storytelling. It's all down hill from there.

But hey, what do I know; this film made almost as much as the previous one (almost breaking a Billion again), and Disney got to rake in even more cash for their ludicrous theme park movie. But going back and experiencing this film again I was struck by something: the film reminded me of the horrible Hobbit trilogy W.B. cranked out years after the Lord of the Rings. It's just as big, and stupid, and overly long, and bombastically shallow as The Hobbit, and also just as forgettable. People loved the first film in the series, and while these are the two films that raked in all the money ever, its the first one people still talk about. For all the moolah these two sequels pulled in, their legacy is is to be the forced continuation of the franchise that no one really cares about anymore.

If anything, these films would have gone on to be known as the low point for the series were it not for two more sequels Disney just had to make later on...