Story In a Bottle

Pirates of the Caribbean: On Stranger Tides

After the previous two Pirates of the Caribbean films, culminating with the wretched, overblown, CGI confusion that was At World's End, many (myself included) wrote off the latter Pirates films. "Hadn't the series already said everything it needed to say?" And, in a way, it had, at least as far as the original two protagonists, Will Turner and Elizabeth Swan, were concerned -- those two had reached the end of their story and there was absolutely no need to revisit them. 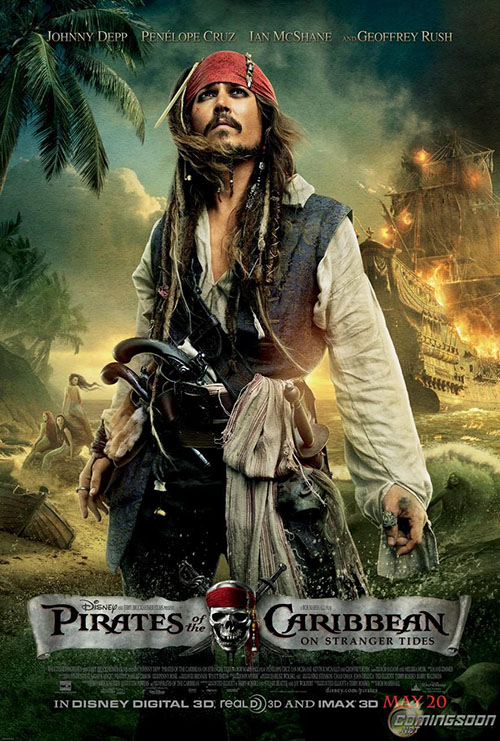 I have to credit the series because, after those three films, it seems like the producers realized that fact as well. That's why here, in the fourth movie for the set, Will and Beth are nowhere to be found. Yes, that does mean that Captain Jack (of course played by Johnny Depp), is now our one and only main character, and he's still the guy slotted into the protagonist role with absolutely no growth afforded to him. The same issues with having Jack as the hero in the previous two films carries over here -- Jack starts and ends every film exactly the same character as when he started -- but the film does at least know how to have fun in the process.

That, I think, is the reason why of the four films we've gone through so far in this series, On Stranger Tides is the most successful since the original The Curse of the Black Pearl. It does all the things you expect from a movie -- provides clear cut good and evil characters, sets up a basic storyline (and sticks to it), and then goes through the natural beginning, middle, and end, all to reach a satisfying conclusion. The fact that this fourth movie hits all those beats makes it a better film than Dead Man's Chest and At World's End, as low of a bar as that may be.

We catch up with Captain Jack Sparrow (Depp) as he's in London working to free his imprisoned friend, and former First Mate, Joshamee Gibbs (Kevin McNally), imprisoned by the British for piracy (and under the mistaken impression that Mr. Gibbs is actually Captain Jack). His prison break doesn't go entirely to plan, though, and Jack has to flee from the British patrol, and former ally (turned Navy Privateer Captain) Barbossa (Geoffrey Rush). This leads him to a bar where someone else pretending to be Jack is recruiting men for a venture out to sea. The person doing the recruiting is Angelica (Penelope Cruz), Jack's former lover, and after a deft fight against each other, and then on the encroaching Brits, the two escape, only for Angelica to double-cross Jack, knock him out, and drag him to her ship.

Well, in reality, Blackbeard's ship. Blackbeard (Ian McShane) is in command and he, and his daughter, are on a quest to find the Fountain of Youth (as a prophecy alluded to Blackbeard's death within a fortnight's time). Jack, having stolen a special map in the previous film, is one of only two people that know how to get to the Fountain (the other being Gibbs who memorized it), and that's why Blackbeard needs Jack. This leads Blackbeard on a race against the British, and the Spanish (who have their own reasons for going to the Fountain), to find the mystical lands and claim it for their own. 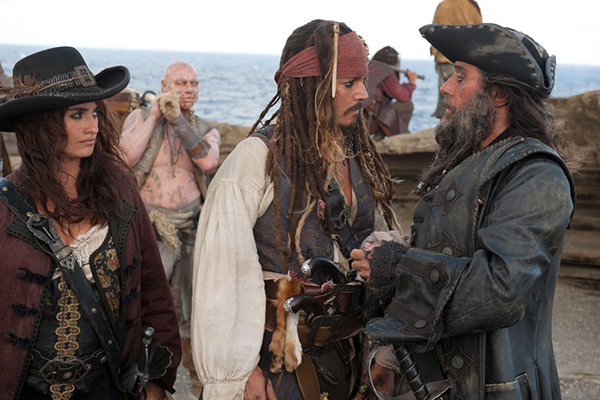 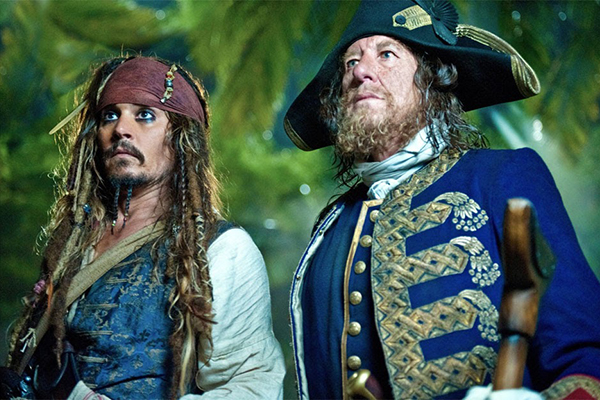 Let's be clear: most of the complaints that could be waged against this series, especially movies two and three, are in full effect here as well. If you think that Captain Jack, as played by Johnny Depp, is a shallow character without any redeeming qualities who shouldn't be in charge of a movie because he'll never change, never grown, and is a one-shtick-pony that's become tiresome very quickly, well... yes. That's all true. And if you also find these movies to be shallow, CGI-driven affairs without much substance, that's also true. This movie doesn't change that at all.

What it does do, though, is find its fun. The last couple of films were tiresome affairs, populated by characters who had already reached the ends of their stories, going through the motions dictated by a story that was five hours too long and which didn't care about the characters at all. Here, at least all the characters involved (saving Jack) have their own motivations, needs, and wants, making a clear tie to the Fountain of Youth (this film's McGuffin) and setting up real stakes for the film. It makes you care, at least a little, about what happens, and then gets about having a grand old time telling its tale.

Parts two and three didn't know what to do with its characters, or its humor, or its story, and it wasted all of that. Here, though, the movie knows how to weave its humor and its story. It does a good job of setting up jokes and bits without it seeming cheesy or expected. It finds ways to use the humor of the situation (such as Jack's repeated attempts at escaping every scrape he gets into) to also elaborate upon the characters (he may always be escaping, but he's actually pretty good at it because he's a survivor). And then it keeps the pace up and trundles through all the story bits as needed to get to the end and finish everything up in a timely manner.

Again, I feel like we're setting a low bar congratulating the movie for managing that, but the previous two films took a story that probably could have fit into a single film, stretched out to nearly six hours, and made the most wretched slog out of it. At a comparatively svelte two-and-a-half hours, On Stranger Tides manages to get through its story without overstaying its welcome, and it does it with less CGI, less bombast, and more interest in its characters. Judging against the other films in the series, that's great! Judging against other films outside the Pirates canon, though, does leave it wanting. 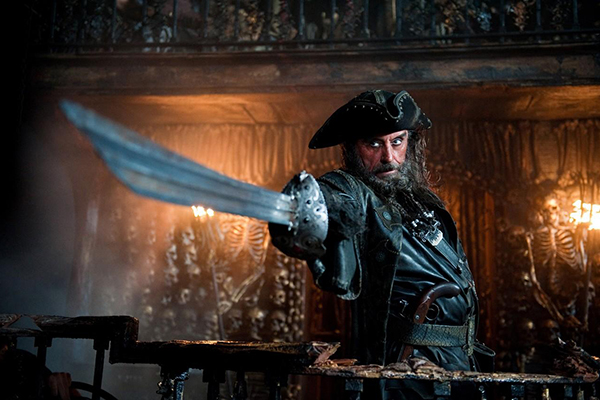 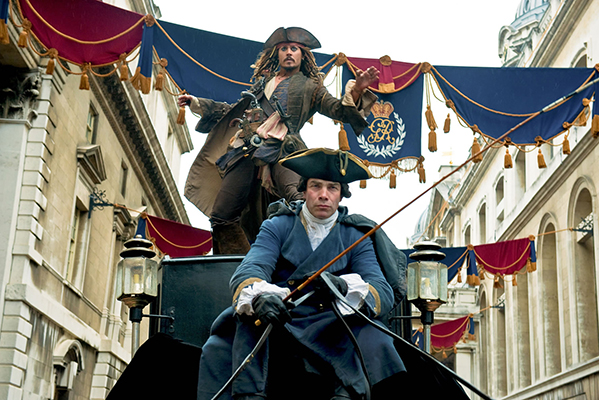 We have a halfway decent villain in McShane's Blackbeard, but he's great not because of anything the film does with him but because of how McShane plays the role (which is, really, akin to how Jack became just a popular character). Barbossa, too, stands as an antagonist to Jack, but we've already seen a lot of Barbossa so there's not much for this character to do or say that's to be expected. And then there's Angelica who's kind of Jack's love interest except for the fact that the movie largely grows bored with her by the halfway point and doesn't even bother building her character at all again until right at the end. None of these villains are effective, barely given depth or substance, but they work as well as they do because of the actors playing them.

And that, of course, can be said for Jack as well. At this point Jack is evolving into a caricature of himself. He's now just a collection of ticks and jokes with a drunken walk and a bit of slurred speech. He doesn't have the vivid chemistry of his previous performances, and I have to think Depp was starting to get bored of the character (but not the money Jack made), which is why Jack seems so... similar this time around. He's already a character that doesn't evolve, but its fair to say that the acting of the character feels regressed even from the previous sequels. The movie tries to do a little more with Jack, as our hero, but Depp doesn't seem all that interested.

I didn't hate this film, and actually found myself enjoying it at times. I have to admit, though, that I'd be hard-pressed to actually describe anything that happened in the movie, and I just watched it yesterday. There some chalices, a bit of magic water, a mermaid, and... well, a lot of running around. It doesn't amount to much in the end, but it goes by quickly and makes you laugh once in a while. Maybe that's enough for audiences (it did make over $1 Billion at the Box Office), but I think that's also the reason why people have largely forgotten about this film in the years since. It was a fine and dandy return to form for the series, but when the series is a shallow and silly series of pirate adventures, is a simple return to form enough?