Sci-Fi is a predictive genre. It speaks to the trends of the world, the hopes and dreams and, yes, fears. When people were worried about the atomic bombs we had a number of stories about monsters made from radiation and the perils of the end of the world. Not all sci-fi plays on fears, of course (Star TrekOriginally conceived as "Wagon Train in Space", Star Trek was released during the height of the Hollywood Western film and TV boom. While the concept CBS originally asked for had a western vibe, it was the smart, intellectual stories set in a future utopia of science and exploration that proved vital to the series' long impact on popular culture., for example, hoped to inspire the dreams of a utopia), but it can often speak to where the world is heading and how people see our society evolving and changing. 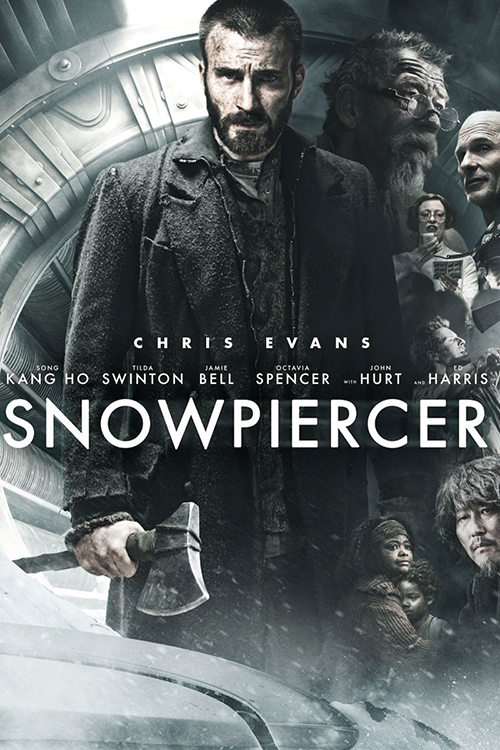 And, really, there's been a lot of end of the world, post-apocalyptic sci-fi as of late. We already covered the The Hunger Games, with its overbearing tyrant controlling the county so he could stay in power, and soon we'll go over The Maze Runner with its worries about the end of the world (with a plague on top to add that happy zest of "did they predict 2020?" vibes), and now we'll get a bit of both with Snowpiercer, one of the most bleak sci-fi action films I've seen in a while.

The film takes place after the end of the world. Due to rising temperatures, the governments of the world agree to pump a chemical into the air, a kind of environmental seeding that should cool the temperatures of globe. That chemical did the trick... too well, plunging the world into a hard ice age, killing much of humanity (as well as the flora and fauna, coating everything in a hard layer of snow and ice). The few survivors all managed to get onto a train, the Snowpiercer, for it planned circumnavigational journey around the world. That was 14 years ago.

Since then, life on the train has gotten hard, at least for those at the back of the train. The Snowpiercer has a hard caste system, from the people at the tail (the free ticket holders), to the economy ticket purchasers, and then the first-class passengers. The further forward you get in the train, the nicer and nicer it gets, not that anyone is steerage has seen that as they're stuck in the last sections, unable to escape, forced to live in dirt and poverty, waiting for their chance. And where previous revolutions on the train failed, this time, with charismatic leader Curtis Everett (Chris Evans) leading the charge, this time steerage might just be able to take over the train.

Snowpiercer, the film, is fascinating. It has elements of Titanic mixed with post-apocalyptic sci-fi, a bit of Atlas Shrugged, all blended with Dread-style "charge to the penthouse" actioner. It's, really, unlike anything I've seen before despite having all these obvious influences; the sum of the film more than changes the various parts, for sure. 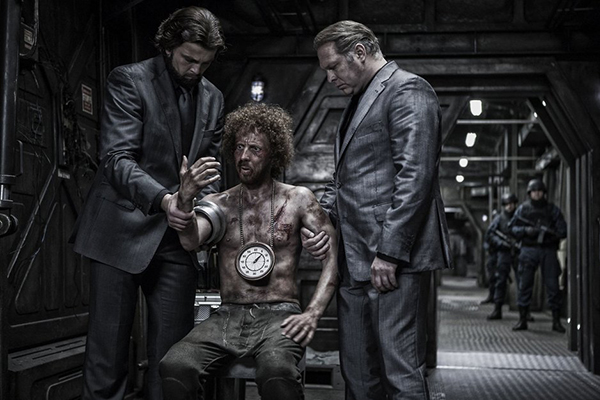 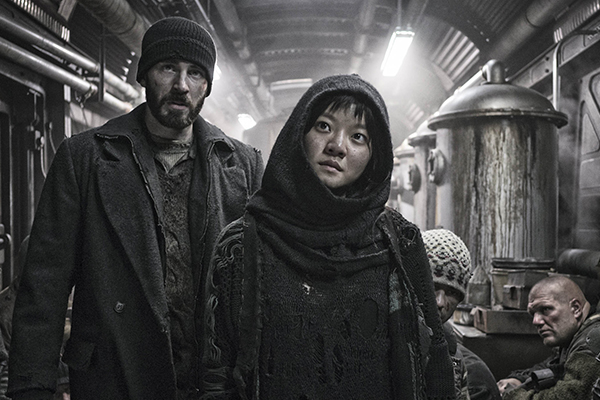 Leading the film is Chris Evans, in a very charismatic, but also hard, performance. The film smartly casts Evans in this role as he's most known for playing Captain AmericaCreated by Simon and Kirby in 1941, Captain America was a super soldier created to fight Germany and the evil HYDRA. Then he was lost in the ice, only to be found and reborn decades later as the great symbol of the USA., a role we all associate with goodness, justice, and doing what's right. That is Chris Evans, in the minds of most audiences now. So when we see Everett, we associate him with Captain America and it colors how we view his character and his actions. He thinks the front of the train is keeping the back of the train down? He might be right. He wants to fight and kill is what to the front? You go for it, Captain! You're a hero.

That is part of the trick the film pulls: as we learn, Everett isn't necessarily as good as we think, nor are the actions of the people in charge of the train entirely evil. Without the train, for example, all of humanity would be dead. And while, yes, many of the actions the people take seem bad, what do you do when your entire world is a small selection of people, trapped on a train for 18 years, with absolutely no escape. That would drive everyone, steerage and first-class alike, a little insane. We see the characters behaving rationally but the world they inhabit isn't rational.

Of course, the rest story here is that humanity sucks and we did this to ourselves. I wouldn't entirely argue that point; as a society we simply aren't doing enough to combat climate change and this movie calls us out on it. Instead of trying for the hard solutions humanity here took the easy way out (as we so often like to do) and it bit us in the ass. Then, forced into desperate actions to survive, we continually beat ourselves down, hurt each other, and act like our worst selves. This is a worst case scenario, yes, but one that feels all to predictive.

At the same time, there's a ridiculous air about the film. A trans-continental train that saves a portion of humanity? What is this, 1930s speculative fiction? That's where the Atlas Shrugged allusions come in, but I think they're there for a reason. The film takes this archetype that so many of the wealthy conservatives elevate (that of Ayn Rand's "heroic" Dagny Taggart) and flips it on its ear. ?You want the rich and power train magnate in charge, eh? Well here's how that will go." The results are properly disastrous because, of course, the rich can't be trusted to fix the problems they caused. 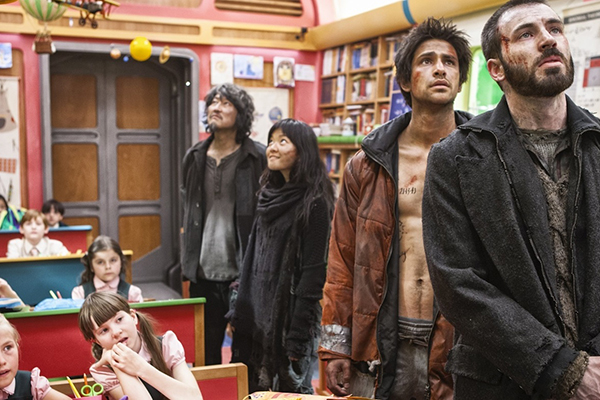 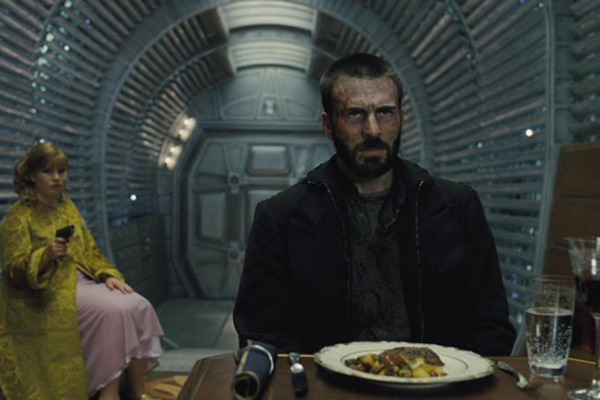 The film takes a preposterous idea, gives us a charismatic hero to root for against an evil tyrant, and then layers on tons of action and blockbuster thrills. In the background, though, it's secretly playing with us, toying with our expectation while preparing to drag the rug out from under us. Suffice it to say, with a minimum of spoilers, that the film doesn't end the way you might hope but it does, in its own way, have an ending that feels fitting for the story it just told. Despite its big-budget trappings, this is a bleak movie that ends right about how it has to for its setting and story.

It's also a very self-contained and tightly paced little sci-fi tale. It's solid, and thought provoking, but it has the sense to get in, get out, and let the message of the film speak for itself. It's a solid watch with enough thrills to entertain, right up until it makes you go, "wait, what?" That makes it an ideal film. There's a TV series based on it that started up recently (I have yet to watch the first season as of the time of this writing), but I have to wonder how you take a tightly focused story like this and change it into a long-running series. It feels like it would lose the gut-punch impact stretched to that length.

For a nasty little bit of sci-fi entertainment, Snowpiercer does deliver. But, more importantly, it had has the chutzpah to define our expectations and defy our need for a happy, Hollywood ending. That's what makes it so good; while I don't think it's an ideal rewatch, not the kind of film you want to revisit over and over once you know the twists that are coming, it has a message that's worth seeing at least once. This is a strange and weird tale but it has something important to say about the potential fate for humanity if we don't get our shit together.