He Is the Law

While I'm a comic book fan, I will admit that my knowledge base of the whole comic industry is limited. I largely have paid attention to DC ComicsOne of the two biggest comic publishing companies in the world (and, depending on what big events are going on, the number one company), DC Comics is the home of Superman, Batman, Wonder Woman, and just about every big superhero introduced in the 1930s and 1940s., and even then I didn't really start reading their stories until the early-to-mid 2000s -- I loved their heroes, but mostly from shows and movies. As such I missed much of the big 1990s uber-dark, buff-dudes-with-pouches-everywhere era of the 1990s comic industry, which meant that I missed out on the heyday of Judge Dredd. 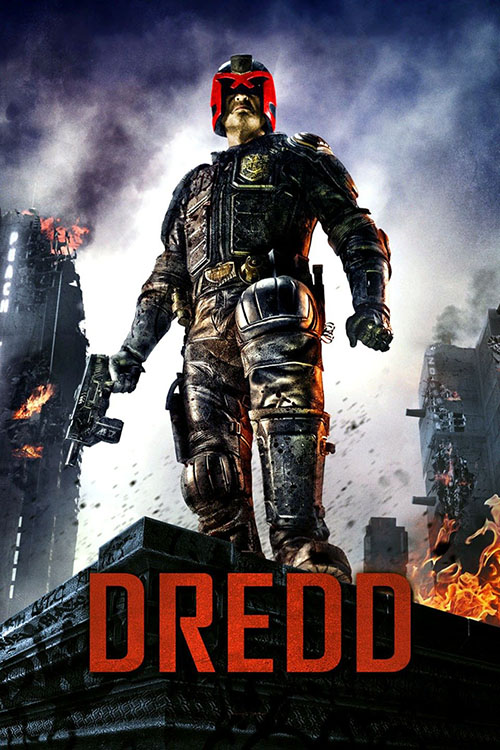 I don't know if I'd call the Judge the most famous independent comic character or his books among the most famous stories, but there was a short time there where Dredd was famous enough to get his own movie back in 1995. It starred Sylvester Stallone and it was an absolute god damned travesty. Seriously, at some point I need to watch that train wreck for this site but I have the muster the energy to make it through that film. Suffice it to say, though, that any desire I might have had, as a teenager in the '90s, to read Judge Dredd and any other associated books, was absolutely squashed by that movie.

I have a feeling I might have missed out, though, because of the 2012 film Dredd is any indication, there were so pretty solid, super-violent, surprisingly deep stories to be had from that series. From what I understand from fans of the series, this second attempt at a Judge Dredd film is much more accurate, and faithful, to the source material than the Sly movie was (even if that's a pretty low bar to try and clear). It's just a pity that it didn't do better at the Box Office so we could have had further adventures with this version of the Judge.

Dredd follows two characters -- Dredd (Karl Urban) and Anderson (Olivia Thirlby) -- on a single day of "patrol". The Judges are police, juries, and executioners, individuals who enforce all aspects of the law, often violently. The patrol Mega City One, a massive complex that stretches from old Boston to old Washington DC, a single, walled complex that is the last vestige of humanity after nuclear war. And it's a rough place to live, with hundreds of thousands of violent crimes every day, of which the Judges are only equipped to handle, maybe, six percent.

We join them for their patrol, the first day of Anderson's review -- if she passes Dredd's approval she becomes a Judge officially. But Dredd is no easy trainer and he expects her to operate at full capacity. Helping her is the fact that she's technically a mutant, growing up near the wall of the city, and that granted her psychic abilities. She'll need those abilities, and Dredd's leadership, to get through the day as their first (and only) case that day is dealing with a tripe-murder at the Peach Trees tower where the drug dealer Ma-Ma (Lena Headey) rules. Once the Judges come calling, Ma-Ma locks the building down, and our two officers will have to find a way to survive the day with all of the tower coming after them. 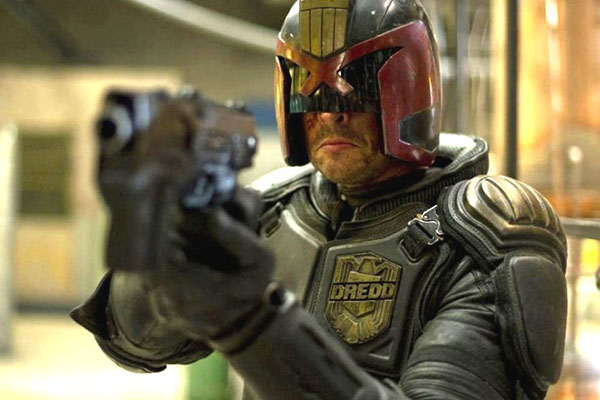 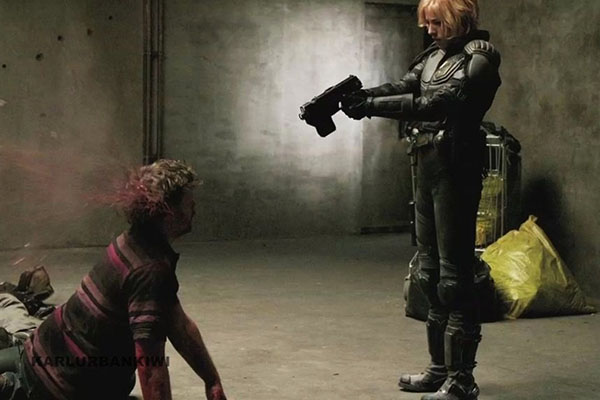 At the time of it's release, Dredd was compared to The Raid: Redemption, another film that came out around the same time, and I do think the comparison works on at least a shallow level. Both films are bombastic action adventures set in a single building with the heroes, effectively, having to get from the bottom to the top of the tower while surviving the waves of dudes thrown at them. But where The Raid is a martial arts actioner, Dredd invests much more in the gun play and sci-fi thrills of its setting. And, frankly, I think Dredd handles the idea more successfully.

The thing I like about Dredd is the tension. The heroes are trapped, stuck in this building without any way to get out. The film is constantly upping the stakes, adding danger-upon-danger (from the mobs coming after them, to giant rail guns shooting waves of bullets at them, to turncoats Judges coming for their heads), it works to constantly up the thrills, to keep the pressure on and never let up. This is an exhausting movie, but I mean that in a good way -- if you come for an action thrill ride, Dredd delivers.

Keeping it all unified is Urban as the titular Judge. Urban's performance here is awesome, tight and controlled with a thread of unrelenting anger at the world that always seeps out. What's most impressive is that Urban does fantastic work as Dredd without ever taking off the helmet that covers three-quarters of his face (showing only his mouth). Dredd never takes his helmet off in the comics and Urban holds true to that (something Sly didn't bother with). It's so good, and so remarkable considering that most Hollywood stars would be loathe to perform and entire movie without showing their face.

Thirlby is pretty good as Anderson although she's allowed to perform without her helmet (the excuse being that the helmet gets in the way of her psychic abilities). Her Anderson is warmer than Dredd, more human (although pretty much anyone has to be). She's our ticket into the world, our viewer surrogate at times, even if she does have a super power, and she also serves as someone Dredd can talk to so he's not a silent protagonist the whole time. While I like how the movie uses Anderson she's really not the star of the show or as compelling as Dredd (but, then, it is his movie). 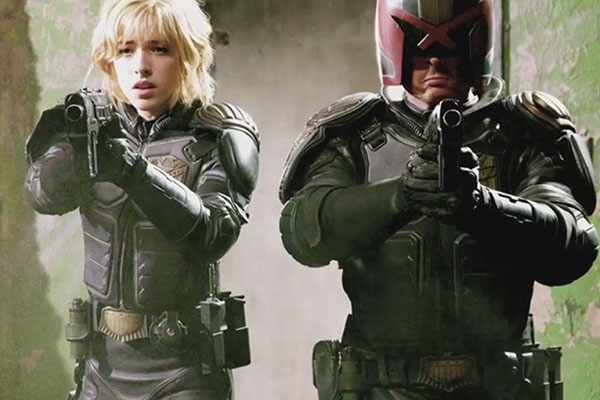 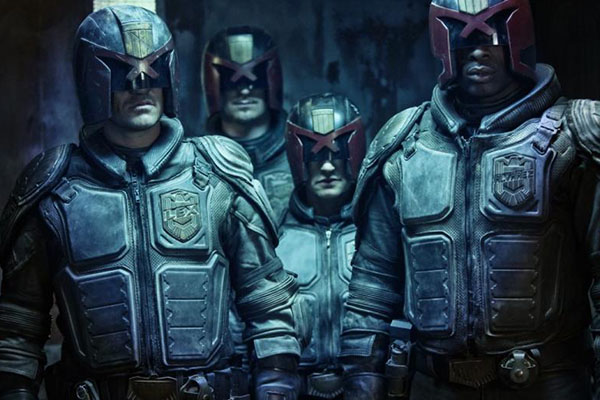 The film got a lot of praise for the special effects, especially when it came to its signature slo-mo style (brought by an in-movie drug called, naturally, "slo-mo"), often combined with its 3D filming. I will admit I've never watched the film in 3D (I missed out on it in theaters and don't own a 3D TV), but I could see how this is one of the few films where 3D might actually aid the movie. There are a number of sequences traveling up and town the Peach Trees tower and a chance to feel that depth, to see the scope of the tower in full 3D (especially as fodder character fall down the building) could be pretty cool indeed.

I dig this movie so hard but it is easy to see why it wasn't a bigger success, only making back its budget at the Box Office (give or take). It's hyper-violent, aggressively so, and that could have turned off a lot of people. It's an unrepentant, dark and broody, action film and that's simply not for everyone. Additionally, the association with the terrible Stallone flick probably didn't help matters even though this film is as far removed from that 1995 fiasco as you could get. I just don't think the theatrical public was ready for a film like this, and who knows, if a sequel ever were to be made (which keeps getting bandied about) I dunno if audiences would flock to that one, either.

Dredd is a perfect slice of dystopian action. If it ever returns, with Urban at the helm, I'll welcome it. For it to be a success it probably would have to be on one of the streaming networks. But if that day does arrive, I'll be there, whether Online or at the theater -- Dredd is so good I'll show up for whatever comes next.