From Zero to Hero

The Chronicles of Riddick

Riddick is an unlikely hero. In fact, really, he's not a hero at all. Although he's played with aplomb by Vin Diesel, Riddick was pitched in his first movie, Pitch Black, as a villain. He cared only about himself and had fun messing with people (and killing them if they got in his way). While he's not the most evil person ever to be shown in films -- he's more uncaring and out for himself than straight up doing every evil thing he can think of -- he's certainly not a character to build a heroic epic around. 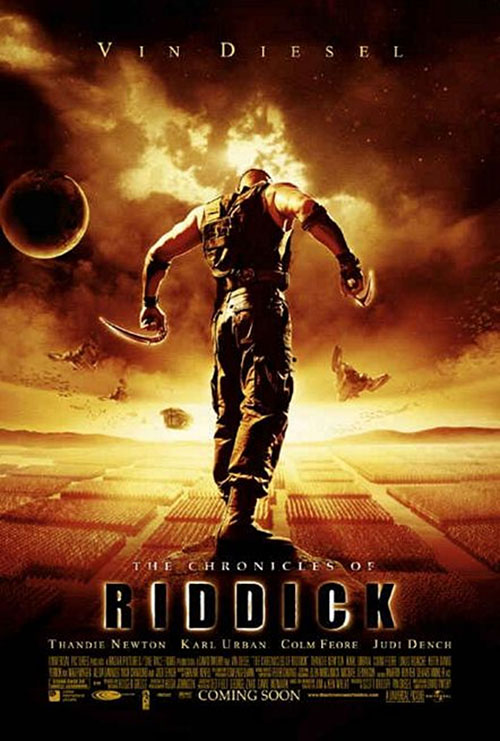 And yet, that's exactly what the producers of The Chronicles of Riddick decided to do. They took their antagonist (who only saved a couple of people in the end of the first film because they earned his respect) and decided to craft a kind of hero's journey around him. If that sounds like a terrible idea, you're not wrong. This film has to go to great lengths to craft a story where the first film's bogeyman can be cast as a hero in just the right light, spinning itself in narrative circles for the entire first act before it finally finds a pace, and a footing, that actually works for the lead character. Perhaps it would have been better to keep him as the bogeyman

The film opens with Riddick (Diesel) pursued by the bounty hunter Toombs (Nick Chinlund) and his crew (who were introduced back in Dark Fury, although I don't recall them having names then). After eluding their capture, and stealing their ship, Riddick makes is way back to Helion Prime to deal with the one man who knew where Riddick was hiding: Imam (Keith David). Imam admits giving up the information to keep his family safe, but before Riddick can exact retribution for the betrayal, the planet is attacked by the Necromongers, an army of religious fanatics dedicated to eradicating all life from the universe. The Necros believe this plane is flawed but it's the next universe, the Underverse, where the "blessed" souls will find eternal peace, so they kill everyone that have to, and convert all that they can, in the name of the Necromonger cause.

After battling the Necros for a bit, Riddick gets himself captured by a returned Toombs all so he can get a quick ride off the rock. Toombs, and his new crew, drag Riddick to Crematoria, a prison planet that also happens to be one of the hottest place in any solar system -- prisoners don't escape because if they're caught out in the sun they're burned alive. Riddick, of course, already has a plan in place to stage a daring escape (as no prison can hold him), but while at the prison he finds Jack (played here by Alexa Davalos), now going by "Kyra" and bearing a major chip on her shoulder towards Riddick. And the Necromongers, not to be out done, are hot on Riddick's tail. He's going to have to make peace with Kyra, stage the escape, and find a way to put the Necromongers down once and for all if he's ever going to be free again.

After the tight, excellent horror of Pitch Black, this full-fledged sequel takes a hard left turn into fantasy/sci-fi world building. The first film didn't need to worry about world building, or back stories for the characters, or really explaining much of anything because it was a tense and taught monster feature; any explanation would have just gotten in the way of the movie, so while the film cast off little details it didn't spend a long time on the universe of the film. Chronicles takes the opposite tack, going whole-hog on world building, trying to explain everything about everything, from Helios to the Necromongers and, worst of all, Riddick himself. This was a terrible idea. 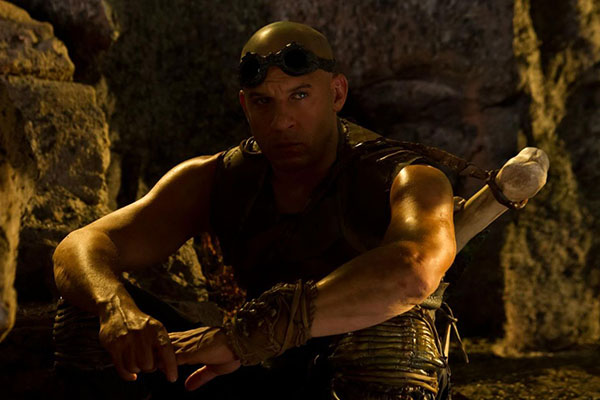 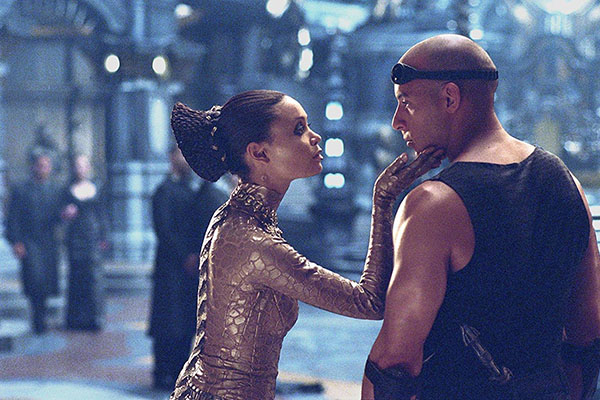 The first film understood something about Riddick: like the beasts he was fighting, Riddick is a monster. The best monsters in films don't need explanation, they just have to come out of the shadows, killing when no one expects, and then fade away again to lurk once more. That's part of the brilliance of Pitch Black: with minimal effort it sets up Riddick as the monster of the piece, treating him like a proper movie monster in all respects, and then gives us an even bigger set of monsters to worry about. In that regard, it takes a monster (Riddick) to fight a monster, and Pitch Black plays off that perfectly.

To a degree, Chronicles tries to play the same trick. It sets up the Necromongers as the big bad guys, an overwhelming force that kills everyone in their path. But it spends a long time setting them up, getting us to "fear" them, and putting Riddick in opposition against them. We're supposed to cheer for Riddick because he's not as bad as the other guys, and that would work great if the Necromongers were at all scary. Instead, with all the speechifying, goofy costumes, and silly effects, the Necromongers come across like a third-rate Middle-earthCreated by J.R.R Tolkein, Middle-earth is the setting for the author's big sagas, featuring the characters of hobbits, dwarves, elves, and men. villain, Sauron's B-team. They just don't work, and yet the film spends so much time on them it drags the entire first act down.

The movie does pick up once we hit the prison planet because here Riddick gets to be Riddick. He goes from an awkward hero in the first act to the biggest, baddest motherfucker in the room, and the film finds its feet. Its dark, its gritty, it features great sequences of Riddick killing people and being awesome, and it gives him a character to play off of in Kyra/Jack. Everything about the film gels together here, making you wish the whole film could have been dedicated to Riddick's capture, incarceration, and eventual escape from Crematoria. This is a film all by itself and it's awesome.

The last part of the movie does go back to the Necromongers again, but at least here there's no stupid speechifying or dragged out sequences. Riddick invades their ship, kills a bunch of people, and then has a fight with the leader of the Necros, the Lord Marshal (Colm Feore). While it doesn't have the same kinetic energy of the middle act of the film, it at least moves at a brisk pace and features solid action. It's a weak finish for the film when, honestly, the film could have just ended with a daring escape from Crematoria and it would have been awesome. But because the Necros were set up in the first act they have to be dispensed with here. By that metric this third act is fine; it doesn't redeem the first act but it doesn't linger and that's not nothing. 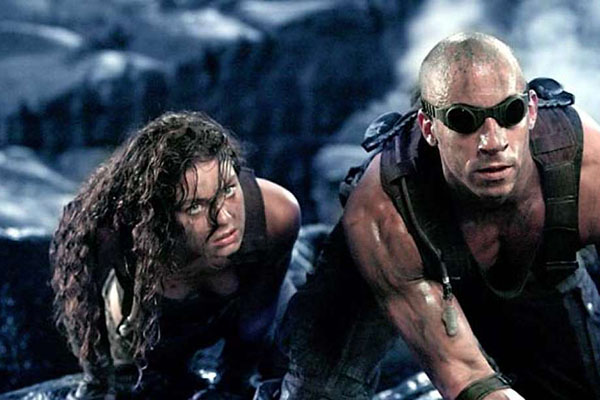 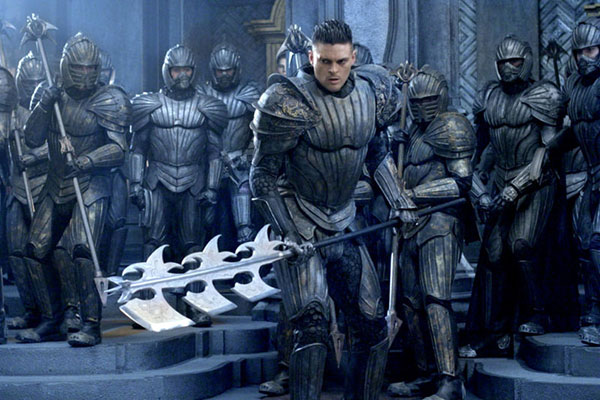 The part that annoys me the most, though, is how the film feels the need to give Riddick a back-story. He can't just be this bad-ass murderer who got his eyes "shined" in prison once (for 20 cigarettes) so he could see in the dark (which is all the story he got in the first film). No, now he has to be a fated protector of the universe, a Furyan (alien race of warriors) with a special "burst" power and a lot complicated history. It's a retcon that does the character absolutely no favors because it dilutes him. Now he has to have a people to fight for, a past to uphold, a world to revenge at the hands of the Necromongers. It all gets in the way of what makes Riddick great -- being a monster -- reducing him, in a way.

The film has so many good actors in it, not just Diesel, Davalos, and David, but also Dame Judy Dench as a weird Elemental person, Feore as the Lord Marshall, and Karl Urban and Thandie Newton as more Necromongers. The problem is that it doesn't know what to do with any of them, miring them all in the worst bits of the film. It's like the creators said, "maybe if we have really good actors they can see this strange fantasy story we want to tell." They didn't, which only makes it seem like more of a waste to have all this talent in this terrible film. All of this to craft a bad fantasy film around a "hero" who's an awkward fit in any kind of protagonist capacity.

When the film ignores all its world building, when it stops toying with Riddick and just lets him be himself, it's great. But it spends a good hour getting to a point where it's at all enjoyable, and by then most people will have shut off. There's a strong movie baked into the middle of the film, all of it set on Crematoria, but it feels like the creators (Diesel and writer/director David Twohy) were so in love with Riddick they couldn't just leave him be. Now he has to be redeemed, he has to be a hero, he has to be something more than a monster. He doesn't need that. Put him on a planet, let him be a bad-ass, and then let him fade off into the shadows. That's all we need from Riddick. That and, occasionally, him killing a man with a tea cup. That happens here and it's great. The rest of the movie, not so much.