I think everyone that has seen the Riddick series can agree that the second big-screen adventure, The Chronicles of Riddick, sucked. It was a bog, bloated, space epic that cost $120 Mil to make (in comparison to the $23 mil for Pitch Black) and it just barely managed to make that back (not counting advertising costs). It's fair to say that the series needed to go in a different direction if a third big film happened. 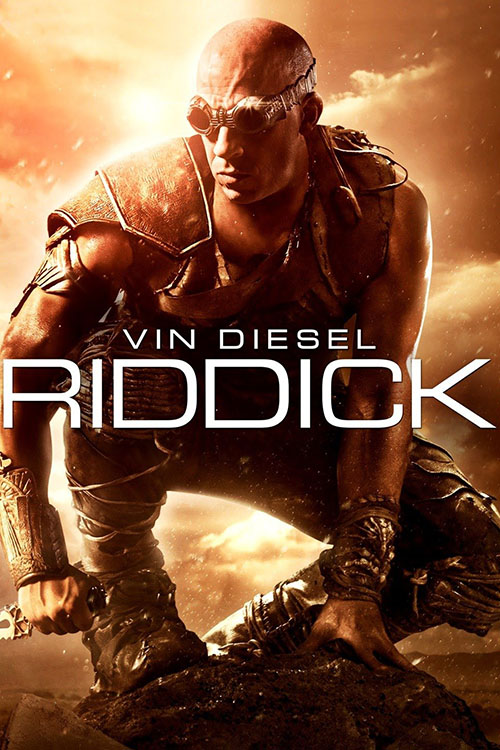 Well, the film series did eventually get another chance with 2013's Riddick (nine years after the previous was released). Instead of the big, bloated space epic, this third big-budget film (although smaller budget overall at "just" $38 Mil) takes a back-to-basics approach. Honestly, it might just be too back to basics as it's, in many ways, just a rehash of the first film with a different monster for Riddick to fight. It takes an approach that can be thought of as "if it aint broke", which, in some regards, is true. The first film worked like gangbusters. I just wish they would have been a tad more creative with this newer film.

The movie takes place an indeterminate amount of time after Chronicles. Riddick, lured to a random planet on the promise of it being his dead homeworld, Furya, is betrayed by the Necromongers, greviously injured, and left for dead. The pmate in question is a nasty desert planet populated by poisonous predators who live in what little water exists in the ecosystem (mostly just shallow lakes and ponds). Riddick spends a few months healing up, fixing his leg, and befriending a "puppy" (this planet's version of a dog, more or less), taking it on as his new predatory companion). But when he notices a nasty rain storm on the horizon he realizes he has to get off the planet. The rainy season is about to begin, and the nasty predators that live in the water are about to come out across the planet for some play time.

Moving across the plains, Riddick eventually finds a bounty hunter way-station. Using the mergency beacon built into the bunker, Riddick lets the system scan him, immediately putting him on the radar of evern bounty hunter group in the region. Two groups show up: one set of renegades led by Santana (Jordi Molla), the other a more prefessional outfit led by Colonel R. "Boss" Johns (Matthew Nable). Sanatana is just in it for the money, but Johns wants answers for what happened to his son, the previous Johns from back in Pitch Black. And Riddick just wants a ride, which he says as he leaves a note for them, in blood. "Leave one ship or stay here and die." Then he goes about picking them off one by one until the rain arrives and, suddenly, both groups and Riddick have to work together to get off the rock. It's work together or die, all over again.

To the film's credit, the first half of the movie is great. It's a story we haven't seen before in this series, with Riddick, on his own, a predator fighting other predators. By making the nasty reptile-whatevers look so monstrous and alien, it allows us to root for Riddick as he stalks and kills them, learning how to live on the planet while he recuperates. It's a smart bit of storytelling that gives a protagonist version of Riddick that still plays to his strengths. He's a bad-ass and you enjoy watching him work. 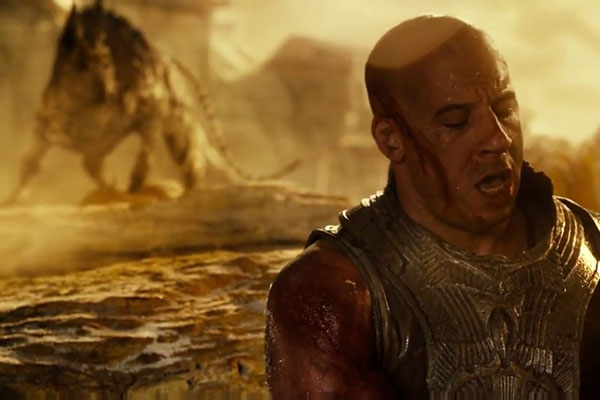 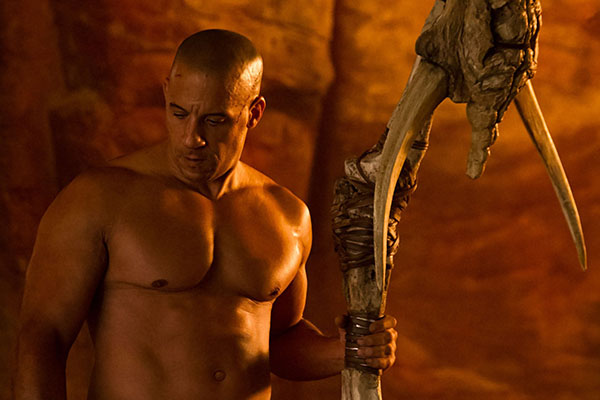 The back half of the film, while still fun, isn't as strong. We'd already seen a version of this story before in Pitch Black. Riddick hides in the shadows, picks his prey off one by one, while they fight and bicker and scramble around. It's worked well before, and, for the same reason, it works here. It's still interesting to see a monster like Riddick work his magic on a group of "heroes", slowly getting into their heads while he does what he loves. Plus, since we were already cheering for Riddick in the first half, that carries over here for the back half. That's smart storytelling.

It just isn't fresh. The locale looks the same -- a desert planet where the aliens come out at "night" (however you want to term it) -- the functions of the crew versus Riddick are the same, and even a lot of his tactics are the same. Having already seen this before there isn't as much punch to it the second time around. Back in Pitch Black there was mystery surrounding Riddick, but we're not three movies deep (plus an anime interquel), so the film can't use the same tricks with anywhere near the same level of gusto. I'm glad the first half of the film is here because if this film was all the back-half story it'd really suck.

Additionally, there's a strange, mysogynistic vibe to the film. Riddick, up until now, hasn't really shown much sexual interest in, well, anyone. Being attracted to people for sex seems alien to the character, near as we can tell, because he doesn't love. Hell, the fact that he ever makes friends at all seems like a foreign idea to him, one he slowly comes to grips with over three films (counting the anime). But here, Riddick is suddenly a sexual beast. He has four women in his bed at the start of the film, and then he makes lustful eyes at a very unwilling woman in the back half. That woman, Dahl (Katee Sackhoff), is an out-and-proud lesbian, but the film treats her like a piece of meat, not only for Riddick but Santana as well.

If the film had wanted to make some statement about how humans suck and men are pigs, with Riddick's way of doing things -- being distant and treating everyone as equals -- could have worked. Santana is a pig and makes lustful eyes at Dahl over and over (trying to rape her even once, an action she makes him pay for). But When Riddick does it, Dahl just... likes it? The film really sets the wrong tone here, and no matter how much Riddick might be a monster, this is a step too far for the character (and for Dahl, frankly). 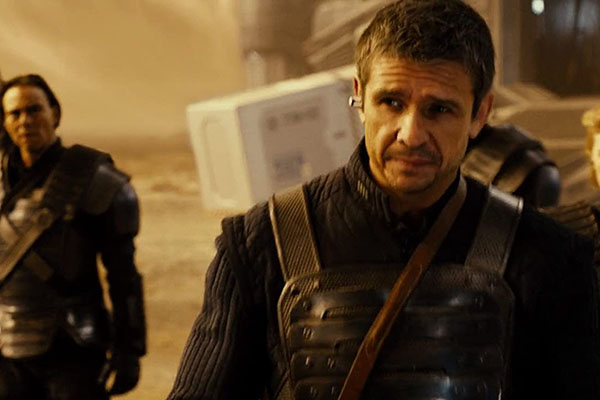 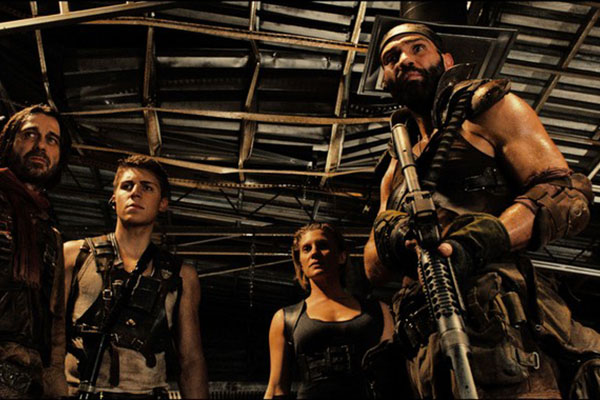 Couple this with the fact that the rest of the characters -- Johns Sr., Diaz (Dave Bautista), Moss (Bokeem Woodbine), and the rest of the crews -- are all unremarkable and boring, and you have a movie that really only cares about one guy: Riddick. The rest of the story is rote because we're not given anything to latch on to. It's a retelling of a story we've seen before, with an even more bland cast of characters than the previous time (completely wasteing some A-list talent in the process), all so we can get Riddick, essentially, right back where he was at the end of the first film. Not a great movie at all for this series.

I'm happy the film more or less dispenses with the Necromongers in this film as that group was awful and really dragged the second film down. But now the series has to evolve. It tried to turn the killer of the first film into a hero in the second, and it didn't work. Failing at that, it tried to make the villain back into the villain the same was as in the first film, and that too just doesn't quite work. Hopefully the fourth film can have some new ideas, if it ever gets made. Diesel is great as Riddick, and the parts of this film that work play to his strengths, as well as the strengths of the character. We're just going to need more now for this series to have any legs moving forward.